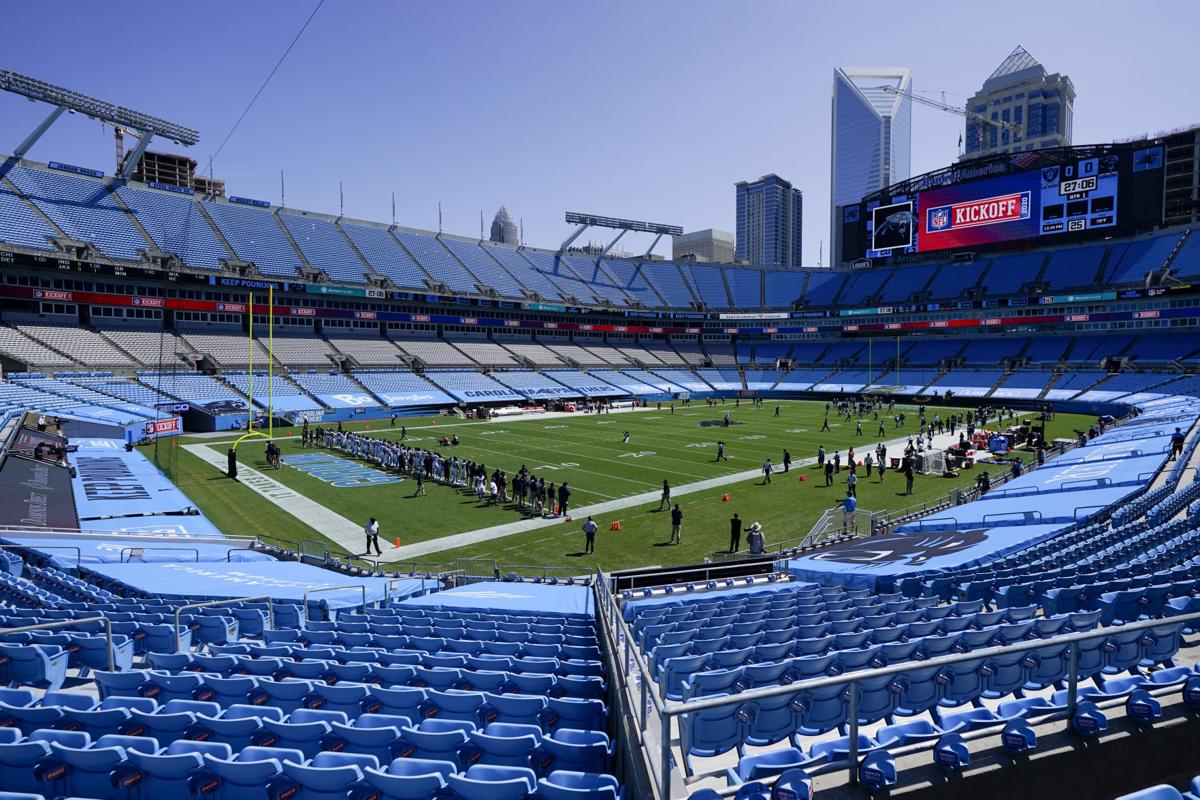 Members of the Carolina Panthers stand during a special presentation in an empty stadium before an NFL football game against the Las Vegas Raiders Sunday, Sept. 13, 2020, in Charlotte, N.C. (AP Photo/Chris Carlson) 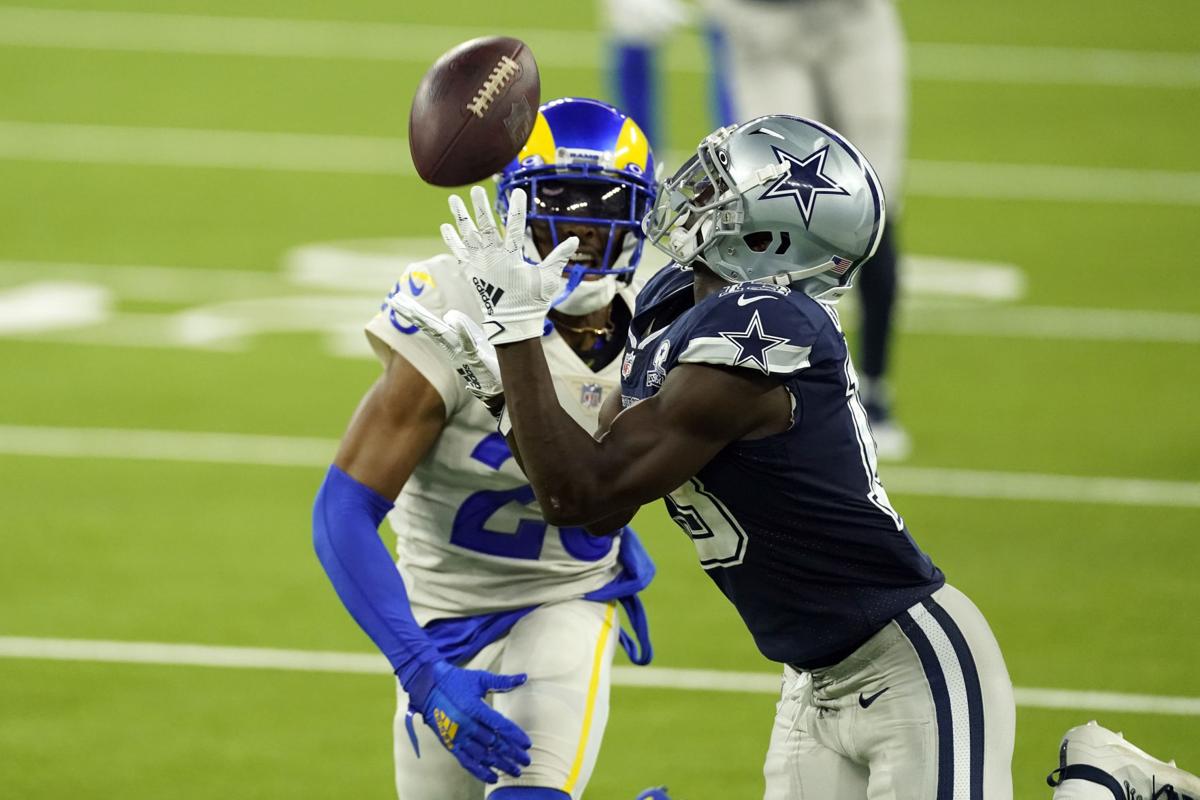 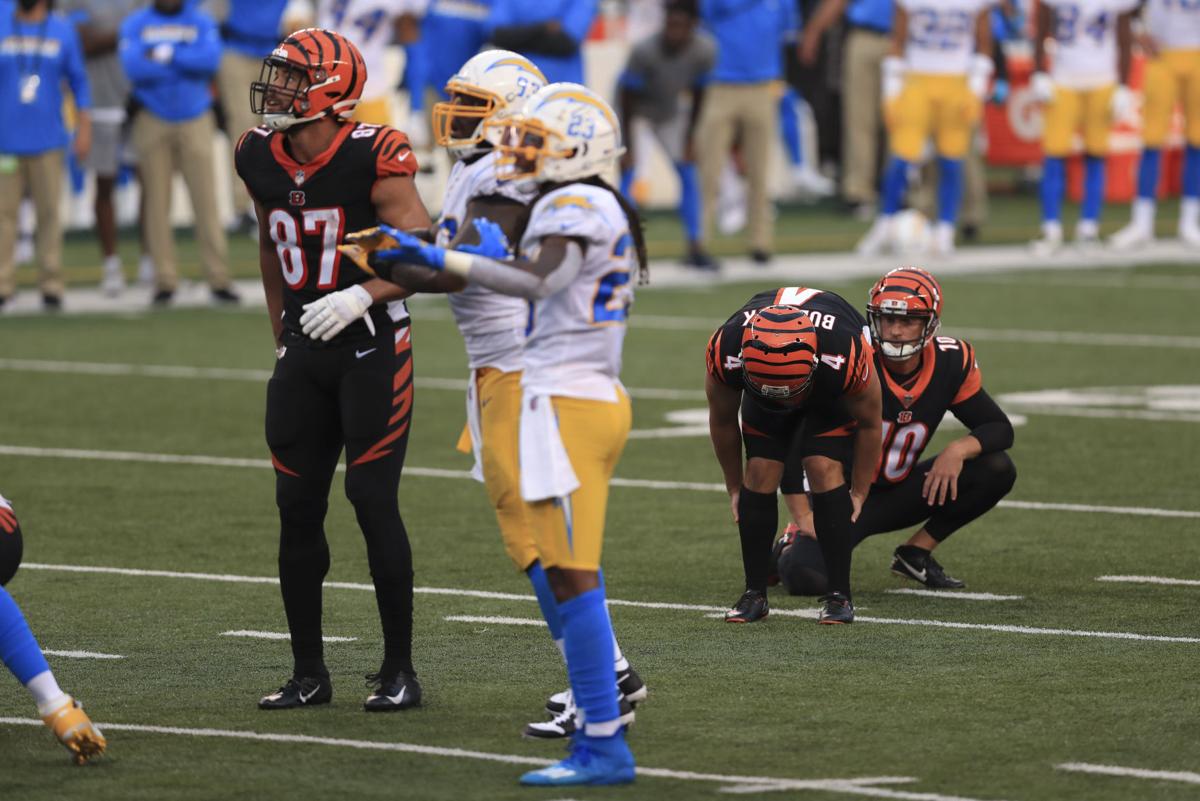 No one can say the crowds influenced the officials.

The crews may have been a bit rusty without a preseason, but only two teams — the Chiefs and Jaguars — allowed fans into the stadium during the NFL's opening weekend because of the COVID-19 pandemic.

So, no fans were in the stands for the two costliest calls in Week 1: offensive pass interference flags on Cincinnati's A.J. Green and Dallas' Michael Gallup in the closing seconds of close games.

The flag on Green for pushing off Chargers defender Casey Hayward wiped out his toe-dragging, game-winning touchdown grab from top draft pick Joe Burrows with 7 seconds left in Cincinnati's 16-13 loss.

That penalty loomed ever larger when Randy Bullock's calf cramped just as he swung for a game-tying field goal that sailed wide right.

"For one, he was clamping me the whole time," Green complained afterward, saying the officials should call it both ways.

Green did extend his left arm for a split second as he gained separation from Hayward for the high grab, although that play seems to happens a lot without a whistle being blown.

Gallup's infraction in Dallas' 20-17 loss to the Rams was much more debatable.

Gallup sped past Rams cornerback Jalen Ramsey, who flopped his head back just as Gallup hauled in Dak Prescott's long pass at the Los Angeles 15-yard line with 21 seconds left.

No flag and the Cowboys get a couple of shots at the end zone and probably at least send the game into overtime with a field goal, provided that Greg Zuerlein's calf didn't cramp.

Instead, the Cowboys were pushed back all the way to their own 24, and Prescott's final heave fell incomplete.

"I think he's got his arm out there, but I don't see him forcibly push him off," NBC rules analyst Terry McAulay said on the Sunday Night Football broadcast.

Despite those two P.I. calls, what stood out most on opening weekend were all those empty seats save for the cardboard cutouts in 14 NFC cities that would normally have been buzzing with tailgates and fans in face paint.

"It was definitely different," Lions quarterback Matthew Stafford said. "I think the biggest thing was the TV timeouts feel like they're forever. It's just super quiet in there. We had a couple of guys get injured and every time someone got injured they'd turn the noise off in the stadium and it was crazy quiet."

"Honestly, it reminded me of the times I was back at the College of San Mateo, my junior college," Edelman said. "It was a full love-of-the-game type mentality out there. You could hear the other guys, everybody could hear each other. It was about going out and playing the game that you love. It was obviously unfortunate that we don't have any fans. That energy and getting to go out there in front of 75,000 people is amazing, but it brought you almost kind of back.

"It was weird. It brought me back at least to high school, junior college, college. My college, we didn't really sell out that much, so it felt like that."

Aaron Rodgers capitalized on an empty US Bank Stadium in Minneapolis to use his famous hard count as if he were at Lambeau Field during the Packers' 43-34 win over the Vikings, where the Gjallarhorn was silenced for the first time.

Rodgers drew Anthony Barr offside on third-and-5 at the Minnesota 41 late in the third quarter and hit Marquez Valdes-Scantling for 39 yards on the free play. The Vikings also jumped offside twice in the first half on third-and-short to give the Packers first downs on scoring drives.

With a normal crowd, Rodgers is probably using a silent snap count instead.

"Got me today. Got a couple guys," Barr said. "His hard count is very convincing. He's one of the best in the league at it."

Still, Rodgers missed having spectators in the seats.

"It was more of just a strange feeling with nobody in the stands," Rodgers said. "It doesn't let you know if a play is a good play sometimes. You're so used to: If noise persists, it's probably an incompletion or a good play by the defense; if the noise stops, it's a good play for the offense. There was no noise, so we had to bring our own kind of energy today.

"The cadence was obviously a big factor. ... Definitely was a weapon for us ... keeping them off balance."

With no fans to feed off, players had to tap into their own vibes.

"We've got to bring our own energy, bring your own juice," Dolphins safety Bobby McCain said after Miami's 21-11 loss to New England.

Seahawks coach Pete Carroll said there was "enough juice and energy there that it was really fun" during Seattle's 38-25 win at Atlanta's empty stadium.

Dolphins quarterback Ryan Fitzpatrick said tapping into one's own energy and riding the emotions of energy shifts wasn't as easy without fans cheering or jeering.

While Bill Belichick deadpanned that yes, he'd seen something like this before with no fans gazing down at the field — " practice! " — his center, David Andrews, was among those who made the most of this odd circumstance.

"We have never really run out onto the field without any fans. Heck, even in peewee there were fans," Andrews said. "But I liked the way we went out there and competed and played the game. In some ways, it brings the game back to why you started playing, just to love playing the game. There's no fans, it is just a bunch of grown men playing a kids' game."

MASKED MEN: The NFL on Monday reminded team personnel on the sidelines about the COVID-19 requirements for wearing face coverings, saying such carelessness or disregard could put the season "at risk."

The strongly worded memo from Troy Vincent, who oversees the league's football operations, came after Rams coach Sean McVay, among others, was often shown on camera without a face covering.

Broncos special teams coach Tom McMahon didn't pull up his neck gaiter during pregame warmups Monday night. He was the only coach on the field without a face covering.

While losing Lane Taylor for the season is a blow, Packers hope win over Vikings showed versatility, depth

With Lane Taylor lost for the season, how the line will look this week against the Detroit Lions in the Packers’ home opener at Lambeau Field remains to be seen.

Behind Aaron Rodgers’ virtuoso performance, Packers kick off 2020 season with 43-34 win over Vikings

Sunday was a masters class in the art of quarterbacking from Aaron Rodgers, who completed 32 of 44 passes for 364 yards with four touchdowns, no interceptions and no sacks in a virtuoso performance that registered 127.5 on the passer-rating scale but was even more impressive than that.

For Packers' Davante Adams, 'beautiful game' — and record-tying performance — were days in the making

‘I shot my shot’: Jaire Alexander delivers 2 critical plays on defense in Packers’ win over Vikings

Third-year cornerback Jaire Alexander made two game-changing plays in the second quarter Sunday to help the Green Bay Packers take control from the Minnesota Vikings en route to a 43-34 victory in their season opener.

"I’m proud of his approach, and I’m proud of the way he played,” Aaron Rodgers said of Marquez Valdes-Scantling after Sunday's victory over the Vikings.

Kansas City earned 10 of 12 first-place votes for 382 points in balloting Tuesday by media members who regularly cover the NFL.

After just one game, the Detroit Lions running backs seem to have established a pecking order: Adrian Peterson and then everyone else.

Members of the Carolina Panthers stand during a special presentation in an empty stadium before an NFL football game against the Las Vegas Raiders Sunday, Sept. 13, 2020, in Charlotte, N.C. (AP Photo/Chris Carlson)