Subscribe
Read Today's E-Edition
Share This
Voluntary? Sure. But for Matt LaFleur at Packers’ OTAs, ‘I’m not comfortable with anybody not being here’
0 Comments
Share this
1 of 2 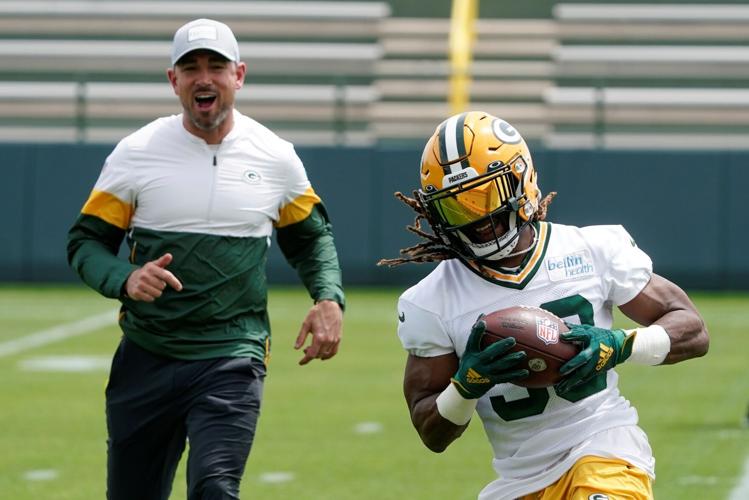 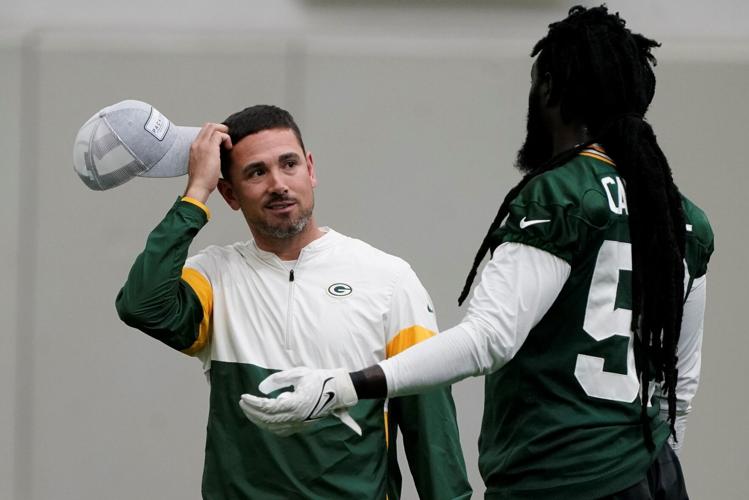 GREEN BAY — Ever even-keeled, Matt LaFleur said all the things he was supposed to say and never altered his tone.

Still, try as he might, the Green Bay Packers’ fourth-year coach couldn’t completely camouflage his feelings on Tuesday about how many of his veteran guys haven’t been taking part in the team’s organized team activity practices, which kicked off their second week on Tuesday.

The absences have included four-time NFL MVP quarterback Aaron Rodgers, who is set to play in the made-for-TV golf competition “The Match” on Wednesday evening; cornerback Jaire Alexander and outside linebacker Preston Smith, both of whom signed contract extensions earlier this offseason; and veteran wide receiver Sammy Watkins, who joined the team earlier this offseason on a one-year prove-it deal but hasn’t been at either of the open-to-the-media practices so far.

Will the Packers come up short of the Super Bowl because of practices missed in May? Probably not. Given the low intensity of the 11-on-11 team periods, are those players missing out on anything major? Not really. Will next week’s mandatory minicamp practices be slightly more meaningful? Sure.

By letting them catch a ride with him, Randall Cobb tries to help Packers rookie wideouts catch on

That’s why LaFleur emphasized multiple times the practices are voluntary, and played up the fact that those who haven’t been attending have communicated their intentions to him. He also said a few players ran into travel problems getting back to Green Bay amid flight cancellations over the Memorial Day weekend.

Nevertheless, LaFleur didn’t sound in any way OK with the number of veterans skipping the sessions.

“I’m not comfortable with anybody not being here. I’d like ‘em all here,” LaFleur said before Tuesday’s practice. “Again, it’s their choice. Next week is mandatory minicamp, so there’s consequences obviously for not coming.”

LaFleur acknowledged the definition of “voluntary” seems to have changed for players in recent years, as the offseason program in past years had been voluntary in name only — and that players risked their standing with the team and coaches if they no-showed.

But with the past two collective bargaining agreements with the NFL Players Association having deemphasized the importance of the offseason — and the 2020 virtual-only offseason all 32 teams experienced because of the COVID-19 pandemic — LaFleur, who entered the NFL as an offensive quality control assistant with the Houston Texans in 2008, admitted players’ attitudes toward these practices seem to have changed.

“Each guy has that right to make that choice. If you’re asking me, I want everybody here,” LaFleur said. “I think some of the thought process may have changed over what’s transpired over the last two years, especially with our COVID situation where we didn’t have OTAs.

“But my thing to our guys is, ‘Well, neither did anybody else. So everybody who was playing, had the same circumstances that they were dealing with.’ Obviously now, with everybody being open, you’d like to see as many guys as possible here.”

NFL Draft: Get to know the newest members of the Green Bay Packers

The Packers have historically incentivized offseason attendance through large workout bonuses, and a handful of players do have ample fiscal motivation to attend, from left tackle David Bakhtiari and nose tackle Kenny Clark ($700,000 each), to running back Aaron Jones, defensive end Dean Lowry and safety Adrian Amos ($500,000 each), to tight end Robert Tonyan, cornerback Rasul Douglas and kicker Mason Crosby ($200,000 each).

Of those players, only Amos, who was in attendance for the team’s open-to-the-media May 24 practice, was absent Tuesday. (Bakhtiari and Tonyan were with the rehabilitation group as they recover from torn ACLs.)

“Seeing how we work together as a unit has been huge for me. And then connecting with my teammates,” Clark replied when asked after Tuesday’s practice where the value is in OTAs for him beyond his workout bonus. “Just being here with the guys, being available, hanging out, just getting connected.

“The closer you are with your teammates, the more you want to give to that guy, the more you don’t want to let that guy down. I truly believe that. So, I think (the OTAs) adds another thing to it.”

Added safety Darnell Savage: “I’m big on family and friends and stuff like that, so just being here around them, being able to work with them, it’s the best thing ever. Like we’ll probably watch the (NBA Finals) together. We’re always doing stuff outside of here and I think that’s one of the things that makes our group so special because we’re close, not only in the building but outside the building as well.”

LaFleur said the value from an Xs and Os perspective is to get players exposed to everything in the playbook before training camp kicks off in late July, because he’d “rather at least them have heard it and just get some exposure to it before the season rolls around.”

That said, LaFleur also knows there’s not much he can do to change the attendance record.

“I think it’s just more the mindset that we’re going to coach the guys that want to be here,” LaFleur said. “And we’re going to try and get those guys as good as possible (so) hopefully they’re in contention to make the roster when it comes down to it.”

Photos: Green Bay Packers get back to work during organized team activities

With new QB Russell Wilson and rookie head coach Nathaniel Hackett, the Denver Broncos have been a ball of energy at their offseason practices.

“We’ll figure all that stuff out. I think if Yosh works at it, Yosh can do whatever he wants,” new line coach Luke Butkus said. “He’s going to have an opportunity.”

For former Badgers lineman Cole Van Lanen, success with Packers comes down to just one thing

The Green Bay-area native trying to make good for the team he grew up cheering for hit a turning point midway through his rookie season and he believes his confident approach has made him a "different player."

“Really the only ‘I’ we want to hear right now is, ‘What I can do to help us win?’ That’s what we’re trying to do with all our players,” Packers special teams coordinator Rich Bisaccia said.

How Packers kicker Mason Crosby is moving on after ‘trying year’

Mason Crosby has a new special-teams coordinator, a new in-person challenger for his job, a new holder, and a new energy amid all the change.

Retirement talk? At age 38, Aaron Rodgers says he thinks about retiring ‘all the time.’

The guarterback talked about the subject — something he rarely does — after Wednesday's “The Match,” the made-for-TV event that pitted Rodgers and Tom Brady against Patrick Mahomes and Josh Allen for 12 holes at Wynn Golf Course in Las Vegas

Aaron Rodgers is coming off back-to-back MVPs and made good on a promise when he arrived Monday for this week's team minicamp.

Aaron Rodgers on Davante Adams' departure from Packers: 'Can't fault him for that'

In the end, Aaron Rodgers said, he believes his own uncertainty about playing beyond this season combined with Davante Adams’ affinity for Raiders quarterback Derek Carr and the Las Vegas area made Adams’ mind up for him.

Check out the scene in Green Bay on Tuesday as quarterback Aaron Rodgers took the field for a minicamp practice alongside his teammates.

Watkins may very well turn out to be a low-risk, high-reward godsend for the Packers’ receiver-starved offense. Or Green Bay could be merely the final stop during an NFL career marked by unrealized expectations and inconsistent production.

Why it took so long, only Allen Lazard can say for certain. And perhaps he will at some point.