The Green Bay Packers ultra-confident second-year cornerback sat atop a locker-room table earlier this week, making proclamations — about how good his defense is going to be (“Defense wins championships — I’ve always said that!”); about how his guys dominated the Houston Texans offense during their joint practices (“We smashed ‘em … We killed ‘em); about how he expects defensive coordinator Mike Pettine’s crew to dominate in late-game situations (“We want to hold the standard that we own 2-minute”).

Keep in mind, of course, that Alexander is the same cocky fellow who during the offseason who predicted he’d be an All-Pro and Pro Bowl pick this season.

But then the conversation turned to Jake Kumerow, the second-year wide receiver who has impressed throughout training camp — just as he did last year — entering Thursday night’s preseason opener against the Houston Texans at Lambeau Field. Quarterback Aaron Rodgers had posited that defenders frequently underestimated the former UW-Whitewater star, and Alexander was asked if he’d ever done so.

“For sure. Yeah. He comes out here with that long hair, that nice smile — nobody’s taking that stuff seriously,” Alexander confessed. “And then he goes deep on you and you’re like, ‘Oh, all right, OK, I’ve got to put some respect on him.’ For sure.”

Alexander wanted to make clear that he hadn’t underestimated Kumerow during last Friday’s Family Night practice, when Kumerow beat him up the right sideline and made a terrific one-armed 37-yard catch on a Rodgers throw, even with Alexander clinging to Kumerow’s left arm.

“Jake Kumerow, he’s a beast,” Alexander continued. “Cool. Cool guy, a competitor, I really like his hands, his routes. He’s real good. He’s one of those sleeper kind of receivers, (where) you don’t really expect it. Shoot. He’s definitely good.”

It’s worth noting that it was Alexander saying these things instead of Rodgers, who has been the unofficial president of the Whitewater Jesus Fan Club since last summer.

The first week of training camp, Rodgers acknowledged he was running out of superlatives for Kumerow — “I don’t need to say anything else about Jake; you guys know how I feel about him,” he said — but when asked in what ways he’d seen Kumerow develop from last year’s camp to this year’s, he had plenty to say.

“He just looks even more comfortable. He’s always been a very smooth route runner; he’s just even more comfortable,” Rodgers said. “The thing I look for, (like) the throw I hit him on in Family Night against Jaire, was his ‘late hands.’ That’s just something that’s hard to teach. The trust to wait ‘til the last second to put your hands out there against a great defender who’s basically playing his hands and not seeing the football, you can’t teach that.

“The best guys we’ve had here over the years — from Greg (Jennings) to James (Jones) to Jordy (Nelson) to Randall (Cobb) — all could do that: To run full speed and at last second put their hands up. He’s just a very mature route runner. And I think he’s faster than a lot of guys who line up over him give him credit for, until they get beat on top.”

Rodgers then brought up a play that happened during the joint practices, when Kumerow whipped Texans’ two-time Pro Bowl cornerback Johnathan Joseph off the line of scrimmage but Rodgers threw the ball to the other side of the field.

“He’s just a very smart guy, cerebral guy,” Rodgers said. “And you guys know I love playing with those kind of guys.”

For his part, even after all that Rodgers has said and after coach Matt LaFleur’s effusive praise following Family Night — “It speaks to just what we’ve been saying all along: ‘You can always count on Jake,’” LaFleur had said – Kumerow continues to insist that nothing has changed for him.

Kumerow did just that last summer, when he worked his way into first-team reps with Rodgers early in camp and caught six passes for 190 yards and two touchdowns in preseason play, including an 82-yarder against Pittsburgh at the end of which he dove into the end zone, injuring his shoulder. That sidelined him for the first three months of the season, but he was activated off injured reserve in time to catch eight passes for 103 yards (including a 49-yard touchdown from Rodgers in the Packers’ comeback win over the New York Jets on Dec. 23) in the final five games.

The 27-year-old Kumerow appears to be solidly at the No. 4 spot in the receiver pecking order, behind Davante Adams, Geronimo Allison and Marquez Valdes-Scantling, although that could chance over the next four games.

Kumerow, who suffered an injury to his left pinkie finger during Family Night and was wearing a metal splint afterward, was on the No. 1 kickoff coverage unit in addition to his receiver duties. Continuing to improve on special teams would certain help solidify his roster spot — the one he refuses to take for granted.

“I don’t think my approach has changed. You always need big plays out there in situations that are when the lights are on and the crowd’s out there,” Kumerow said. “Before, I’d be getting in the huddle with Rodgers and with some of the 1s and I’d be excited, but (in awe). Now, I’m excited still, to get in there with them, but now it’s feeling more normal because I’m doing it more and more. Getting more reps with them, I feel like I’ve grown in that part. Because I hop in the huddle and it’s just, ‘OK, here we go.’”

“I just try to do me every time, try not to be any different. I don’t think anything’s changed. Maybe I’m getting more reps here with the 1s than I have in the past, but the rep count is the same. It just depends on who you’re getting them with. It’s not like I’m getting more plays than previous camps, they just might be with different quarterbacks. So my mentality’s the same – trying to make the team.“

Jason Wilde offers three keys for the Green Bay Packers when they host the Houston Texans in their preseason opener Thursday night at Lambeau Field.

A month from the season opener, is it time to worry about the Packers’ offense?

As the Packers wrapped up their two-day joint practice with the Houston Texans Tuesday in Green Bay, their new-fangled, cutting-edge offense has yet to look all that impressive in practice.

Even as he became an NFL superstar playing for Houston, J.J. Watt has never forgotten where he came from, making him one of the state’s favorite sons and greatest ambassadors.

Insisting he’s not ‘old and slow,’ Jimmy Graham vows to be the player Packers expected him to be

The 33-year-old veteran believes he’s a good fit for the Packers’ new offense under Matt LaFleur, who uses multiple tight end sets and appears to have big plans for Graham.

Lonnie Johnson drilled Jace Sternberger so hard that Sternberger’s helmet flew off — and Johnson then stood over him in a flexing, taunting manner, touching off a brawl.

During Family Night at Lambeau Field on Friday night, Tony Brown gave everyone something to really talk about with an interception of DeShone Kizer he returned for a touchdown.

“Obviously I’m thrilled and excited to be back in Green Bay and to be playing in Wisconsin," Watt said. "The last time we played here, I was injured, so I couldn’t play at Lambeau."

Marquez Valdes-Scantling has emerged early in camp as the clear-cut third wide receiver in the pecking order behind No. 1 target Davante Adams and Geronimo Allison.

Having admitted late last year that he needed to be more of a professional, the Packers third-year cornerback took a new approach with his time off this offseason.

Tickets for Packers vs. Raiders preseason game in Winnipeg not selling well

Winnipeg-based journalist Carter Brooks says the game is on pace to draw fewer than 9,000 fans — a little more than a quarter of the 33,000-seat capacity.

Only time will tell whether LaFleur squandered an opportunity to give the first-team offense a few series to work together in a live setting as it works to master his offense.

Aaron Jones understands that coach Matt LaFleur’s passing game is reliant on a successful running game setting up play-action passes and keeping defenses guessing with a more balanced run/pass ratio than the Packers have shown in recent years, so he knows his role will be vital.

“I really just want to live up to what’s within myself and be better than what I have been,” said Moore, who caught just two passes in his rookie season last year.

With Oren Burks out, Packers linebacker Curtis Bolton vows not to waste his shot

Bolton has gotten work with the No. 1 base defense the past two days after starter Burks sustained a chest injury during Thursday night’s preseason opener against the Texans.

With the Green Bay Packers having marked the 100th anniversary of the franchise's founding on Sunday, Jason Wilde ranks the five most importan…

Photos: With Aaron Rodgers out, Packers can't hang with Ravens in preseason matchup

As quarterback Aaron Rodgers sat out with back tightness, the Green Bay Packers lost to the Baltimore Ravens, 26-13, in a preseason matchup Th… 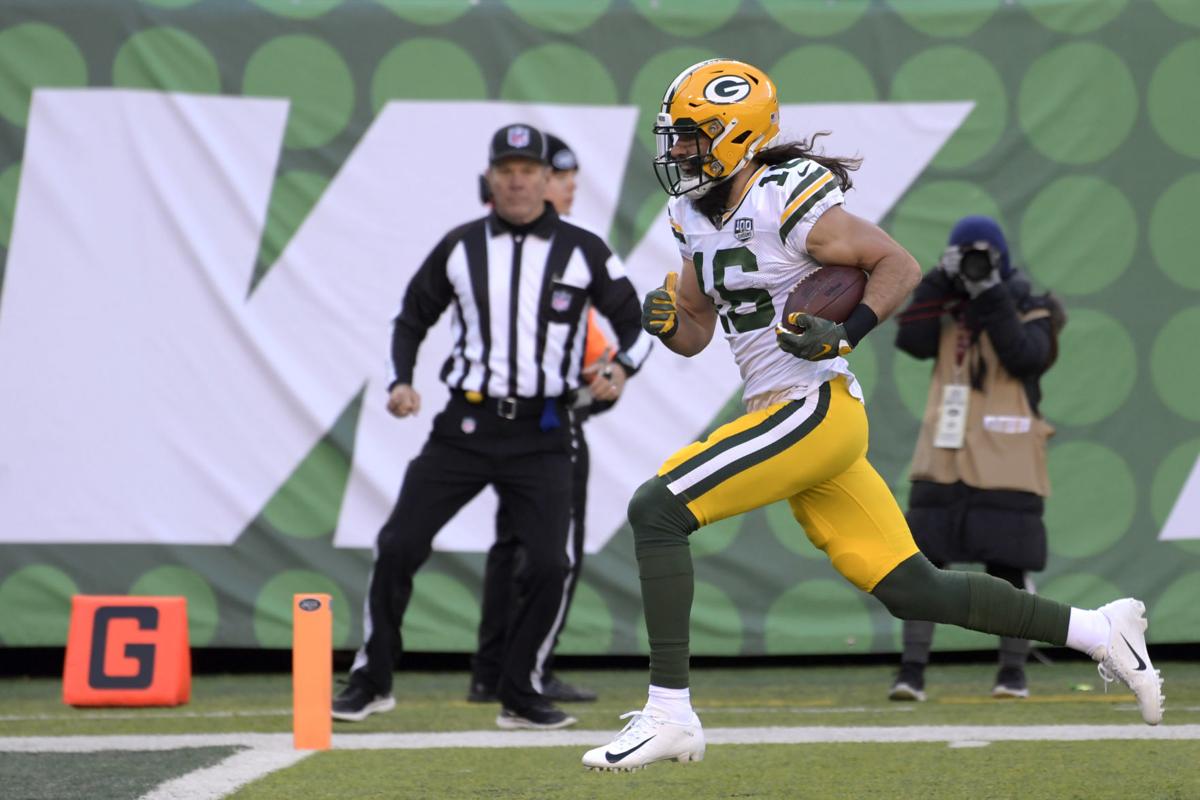 Jake Kumerow caught eight passes on 11 targets last season. One of the receptions went for a touchdown. 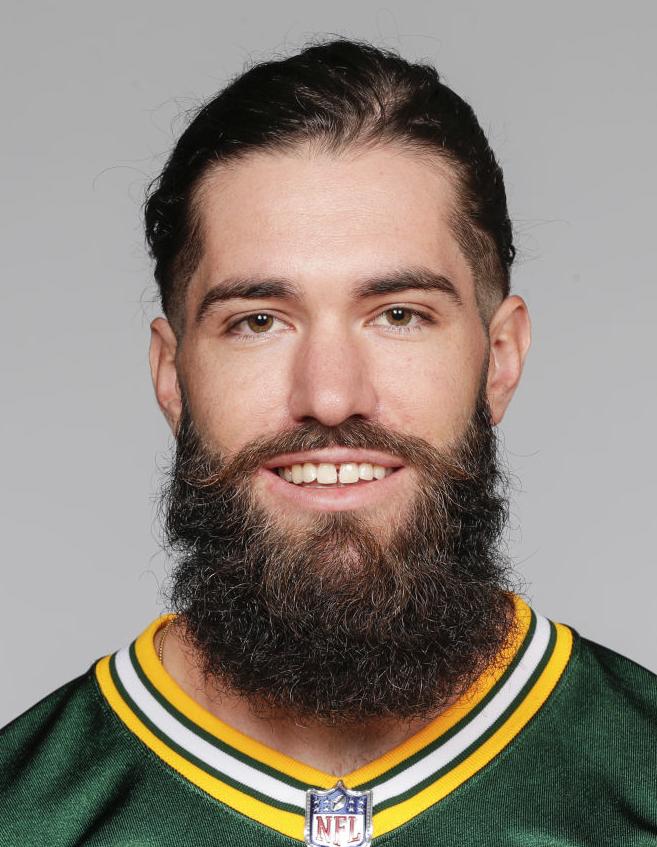