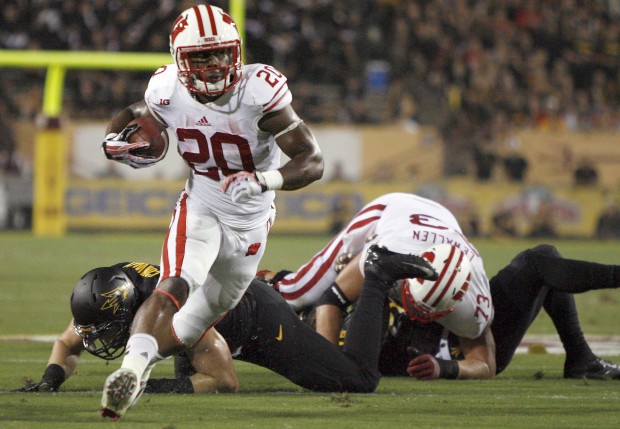 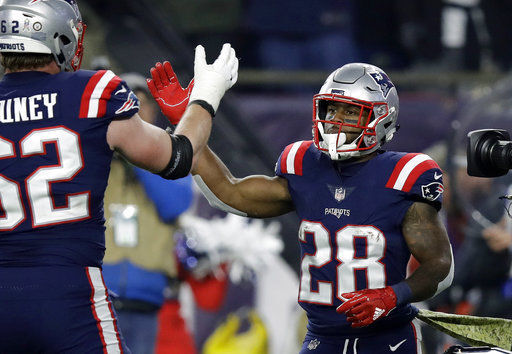 New England Patriots running back James White, right, celebrates his touchdown run with Joe Thuney, left, during the first half of a the Patriots' 31-17 win over the Green Bay Packers on Sunday, Nov. 4, 2018, in Foxborough, Mass.

When Giovani Bernard's family moved from Fort Lauderdale to Boynton Beach, he asked Tyrone and Lisa White about living with them and their son, James, to avoid an unbearable commute his final two years to St. Thomas Aquinas High.

"We'd love to have you," Tyrone White said.

"He gave me his two top guys," Billitier said.

Maybe this helps tell who was lost Sunday. Maybe it starts to explain why so many are in such pain over the death of Tyrone White, 59. Maybe it shows a glimpse of the father, the friend and the law-enforcement leader who died in a Broward crash that also has his wife Lisa in critical condition.

This is why George Smith, the St. Thomas athletic director and former football coach, went silent Monday morning in a search for words and sounded despondent even as he found some.

"He was always so helpful, loyal and humble," Smith said. "Just like James."

You always could see the father through the son, Smith thought, even as James White rose to football acclaim. Wisconsin? The New England Patriots? Super Bowl stardom in 2017 when he caught 14 passes for 110 yards and scored three touchdowns in the Patriots win?

James remained the humble and hard-working player his father taught him to be. Bernard did as well. James White and Bernard, now a Cincinnati Bengal, each scored 20 touchdowns as juniors at St. Thomas in 2008.

Tyrone and Lisa set up protocol for recruitment during their seniors years. Recruiters had to make appointments, be on time and, when a recruiter came to see one of the running backs, the other had to leave the room.

"I wouldn't have had my success without the Whites' help," Bernard said.

Every community has someone like the Whites — giving, friendly and hard-working. So everyone felt the pain with the news of Tyrone White's death. Smith, who traded texts with James White at 1 a.m. on Monday, later reached to tell him of the dozens of high school friends and teammates thinking of him.

The law community, Bellitier knew, was shook, too. For nearly a decade until retiring in 2015, Bellitier oversaw an FBI team in charge of catching violent fugitives — "the worst of the worst," he said.

Murderers. Rapists. Some were on the "America's Most Wanted" show. Others were on the FBI's top 10 most wanted list. The FBI needed local law officers for their help and neighborhood knowledge.

"We had a great tactical team," he said. "(Tyrone) White realized the importance of the team concept, working together, and didn't just supply us with his top guys but would call every few weeks and ask how things were going and if we needed anything else.

"He completely understood what being part of a team meant. I'm sure that's where James got it from."

Bellitier is an assistant coach at St. Thomas. At one point, Tyrone White mentioned his son was going to attend the school and play football. They'd see each other at games — the two sides of their lives brought together.

"He was serious in his job, but had a fun-loving personality," Bellitier said. That, too, is the son. "Smiley," was James White's nickname in high school.

Smith remembered a nationally sponsored series where each team named a former player as an honorary captain.

"We picked James one year," Smith said. He was at Wisconsin, so Tyrone and Lisa came over, and were called out of the stands and came to midfield. Tyrone is laughing, saying, 'What am I out here for?' That was him. Humble and fun."

On Monday morning, at the end of his media video conference, Miami Dolphins coach Brian Flores had something to say beyond football. He was a New England assistant for five years when James White played there and wanted to express his condolences.

"I just want (James) to know he has our support," Flores said. "We're praying for his mom right now. His dad was a truly great, great, great man who did a lot for a lot of people."

NFL scouts have enormous respect for how UW develops often unheralded recruits into the best players they can be.

“Last year is last year. This is a new year, and it’s a what-have-you-done-for-me-lately league,” said White, who scored three touchdowns, including the game-winner, in New England's stunning 34-28 over Atlanta in Super Bowl 51.

The quarterback says the running back deserved the game's MVP award.

The third-year running back from Wisconsin scored the winning touchdown in overtime and finished with a Super Bowl-record 20 points and 14 catches for 110 yards.

The Patriots pulled themselves out of a 25-point hole against the Atlanta Falcons to a 34-28 win for New England’s fifth NFL championship. It was the first Super Bowl decided in overtime.

Highs for the area will be in the upper 70s on Tuesday, and will stay in the 70s into the weekend, according to forecasters.

UW and all other teams from conferences with plans to play this fall were included in this week’s poll after being excluded in previous weeks.

New England Patriots running back James White, right, celebrates his touchdown run with Joe Thuney, left, during the first half of a the Patriots' 31-17 win over the Green Bay Packers on Sunday, Nov. 4, 2018, in Foxborough, Mass.