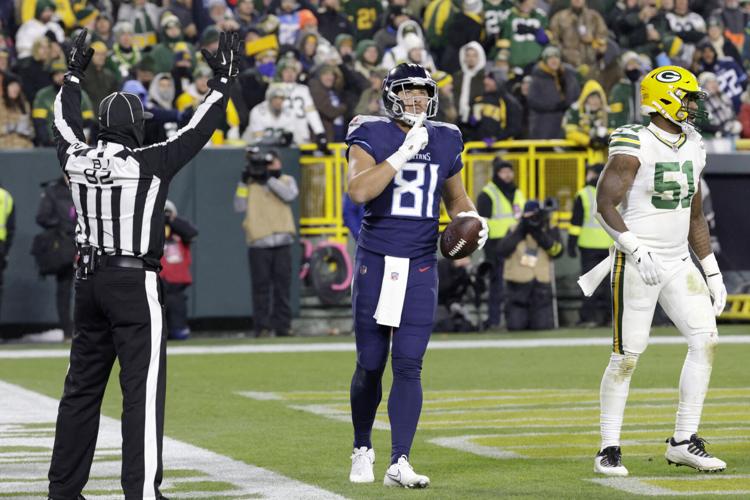 Titans tight end Austin Hooper celebrates his touchdown catch between back judge Jimmy Russell and Packers' Krys Barnes during the second half Thursday night at Lambeau Field. Hooper had second-half scoring receptions of 3 and 16 yards. 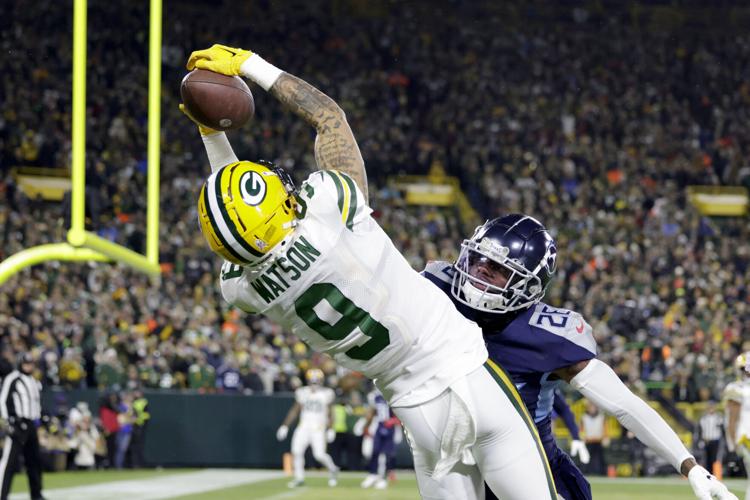 Leaping to the façade: LeRoy Butler’s name unveiled at Lambeau

GREEN BAY — As the final 2 minutes ticked away on the Lambeau Field clock, Aaron Rodgers sat on the Green Bay Packers bench, bundled in a heavy coat, a winter hat pulled down low on his noggin, staring straight ahead, seemingly deep in thought.

The Packers’ four-time NFL MVP quarterback had just watched his team squander a green-and-golden opportunity to not only validate what had seemed like a season-shifting come-from-behind victory over the Dallas Cowboys four days earlier, but to announce themselves as serious playoff contenders in a weak NFC where anything could happen.

Instead, with so much to play for and the built-in advantage of playing both ends of a short week at home, the Packers once again looked like the lost, searching-for-answers team they’d been so many times already this season. This time, though, their 27-17 loss to the Tennessee Titans might’ve finally been the conclusive evidence they’re just not good enough this year.

And so, after completing 24 of 39 passes for 227 yards — but, by his own admission, throwing some “a lot of wobblers” — just days after seemingly being on top of his game while beating the Cowboys, Rodgers was asked what was going through his mind on that chilly home sideline in the final moments of the game.

He paused, took a pull from his bottled beverage and furrowed his brow.

“That was probably it.”

Whether that’s probably it for the Packers’ 2022 season remains to be seen, but there’s no denying the opportunity lost.

“Extremely disappointed right now to put on a performance like that,” Packers coach Matt LaFleur said. “I just, I don’t even know what to say. It was nothing like a few days ago.

“And that’s why you’re only as good as your last game, and every time you step out on that field you’ve got to go out and do it.”

And because they didn’t, instead of going into Philadelphia to face the NFC-leading Eagles with a modicum of momentum after back-to-back wins, the Packers are now 4-7 and have now lost as many regular-season games this year as they did over the past two seasons combined.

The Titans, despite a banged-up lineup and the inconvenience of traveling for “Thursday Night Football,” improved to 7-3 and remain atop the AFC South and in the thick of the AFC playoff hunt.

“After a quick turnaround, we had a lot of momentum coming off the last game, and we just didn’t play up to our par,” said veteran wide receiver Randall Cobb, who returned from a four-game stint on injured reserve because of a high-ankle sprain to lead the Packers in receiving (six catches for 73 yards).

“We’ve got some learning to do, and at this point in the season, we’ve got our backs against the wall. We’ve got to figure some things out … fast.”

Unable to move the ball on the ground against the Titans’ second-ranked unit — after combining for 203 yards on 37 carries against Dallas, Aaron Jones and AJ Dillon managed just 53 yards on 18 combined attempts — Rodgers and his receivers looked like they weren’t in sync essentially all night.

The only times Rodgers and a receiver looked to be on the same wavelength were when he was throwing to Cobb or rookie Christian Watson (four catches for 48 yards, including 14- and 8-yard TDs).

“I’ve got to go back and watch it,” LaFleur replied when asked about the disconnect. “It was a little off tonight for sure.”

The disconnect was obvious — and inopportune — with 7 minutes to play and the Packers still within 10 points. On a third-and-3 from Tennessee’s 37-yard line, Rodgers had Allen Lazard open on a crossing route but threw high.

If he hits Lazard in stride, it’s a first down and the Packers get a field goal at minimum, making it a one-score game. Instead, the ball was incomplete. On the ensuing fourth down, Lazard stopped his sideline route and Rodgers threw it well beyond him.

As for the fourth-down play, Lazard said: “I just didn’t know what happened. I ran my route, and I thought the ball was thrown. It looked like it was thrown. And then by the time I realized the ball was in flight, I had already kind of stopped.”

Asked why a defense that came into the game ranked third in the NFL against the pass couldn’t stop the pass, cornerback Jaire Alexander pointed to the Packers’ all-out focus on stopping the run.

“There’s so much emphasis on stopping the run, you know? And those coverage busts, it just can’t happen at this point,” Alexander said. “I think on a few of those plays that we could’ve communicated better. And you’re worrying about stopping the run and it’s loud …”

The Titans took the opening kickoff and made it a 7-0 game without much resistance on their way to a 14-yard Ryan Tannehill-to-Dontrell Hilliard touchdown. The Green Bay defense, a third-and-7 stop away from a three-and-out, instead gave up a 43-yard Tannehill-to-Treylon Burks deep ball downfield, with Burks getting behind nickelback Keisean Nixon.

Green Bay answered two series later, with a 24-yard catch by Cobb jump-starting the drive, which ended in a 14-yard Rodgers-to-Watson free-play touchdown when the Packers caught the Titans with 12 men on the field at the snap.

A low Jack Coco snap led to Mason Crosby’s extra point being blocked — the third time the Packers have had a place-kick blocked this season — to leave Green Bay down 7-6.

The Titans then embarked on an 18-play, 10-minute 6-second drive that chewed up most of the second-quarter clock but didn’t result in points because inside linebacker Quay Walker met Henry on fourth-and-1 from the Green Bay 4 and threw him for a 2-yard loss.

The celebration was brief, however, as the Packers gave the ball right back, going three-and-out — with Rodgers getting called for intentional grounding while standing on the goal line on third down.

That left the Titans plenty of time to move back into scoring position. After limiting Henry’s effectiveness early on, the defense couldn’t prevent his 4-yard touchdown run, which made it 14-6 at the half.

Green Bay moved the ball on the opening possession of the third quarter, but the drive stalled at the Titans’ 20-yard line and the Packers had to settle for a 39-yard Crosby field goal to make it 14-9.

But Tannehill, who finished the game 22 of 27 for 333 yards with two touchdowns and one interception (127.3 rating), continued to dice up the Packers defense.

With a 31-yard deep ball to a wide open Chig Okonkwo and a 42-yard catch-and-run by Henry on a screen pass to the left flat, the Titans went from their own 12-yard line to the Green Bay 9. Henry then took a handoff, ran toward the line and then jump-passed a 3-yard TD to tight end Austin Hooper. Kicker Josh Lambo clanged the extra point off the right upright to keep the score at 20-9.

The Packers answered again, with a 28-yard Rodgers-to-Cobb completion leading to yet another Watson touchdown, this time an 8-yarder. Jones’ 2-point conversion run made it 20-17.

But yet again, the Packers’ pass defense couldn’t get a stop. Instead, the group left wideout Robert Woods all alone for a 32-yard pickup. Three plays later, Tannehill hit Hooper for a 16-yard touchdown and a 27-17 lead.

“It was just a bad night, all in all,” LaFleur said. “I mean, we’re not in a very good position right now, that’s for sure. Like I told the guys, like, there’s no margin for error. Period.

“It’s disappointing when you have, whether it’s a coverage bust defensively, whether it’s protection busts, or any type of mistake in regards to the mental errors. That’s extremely disappointing, especially where we’re at in the season. And quite frankly, even when we are all on the same page, we’re not executing to the level that we need to.

Key: Green Bay gives up a touchdown on the game's opening possession and never leads.

Check out photo galleries from every game of the Green Bay Packers' 2022 season, starting with training camp and preseason play.

Have Packers turned a corner on offense? ‘I don’t know,’ Aaron Rodgers says

The unit up a season-high 31 points and amassed 415 total yards (their second-most this season) in Sunday’s win over the Dallas Cowboys.

Rodgers fumbled four times (losing two) in just 45 total touches this season — tied for the most among NFL non-quarterbacks.

The Packers couldn't overcome a poor defensive effort leading to a tough report card after loss against Titans.

Joe Barry's defense did a quality job against star running back Derrick Henry, but Ryan Tannehill had his way. And Aaron Rodgers and the offense weren't good enough to overcome it.

Green Bay needed something special from its franchise quarterback because its defense got shredded. Instead, Aaron Rodgers looked ordinary.

Green Bay didn't get to rest after the overseas loss and the coach says that may be a factor in the 4-7 record.

Packers’ reality? ‘We're going to have to play a hell of a lot better'

Aaron Rodgers said the Packers can win their final six games if they play up to their potential.

The challenge is figuring how to make sure Christian Watson can continue his upward trajectory while not burdening him with so many responsibilities that he reverts to overthinking his role.

Never was the unpredictability of Aaron Rodgers’ injury more obvious than during the recent five-day span that included a win over Dallas and a loss to Tennessee.

After Packers’ 2016 revival began in Philadelphia, could it happen again?

The 2016 Packers reeled off eight consecutive victories following a 4-6 start to reach the NFC Championship Game before losing to the Atlanta Falcons.

The thumb hasn’t been the reason the offense has been run largely out of the shotgun for much of the season, Aaron Rodgers said.

Titans tight end Austin Hooper celebrates his touchdown catch between back judge Jimmy Russell and Packers' Krys Barnes during the second half Thursday night at Lambeau Field. Hooper had second-half scoring receptions of 3 and 16 yards.