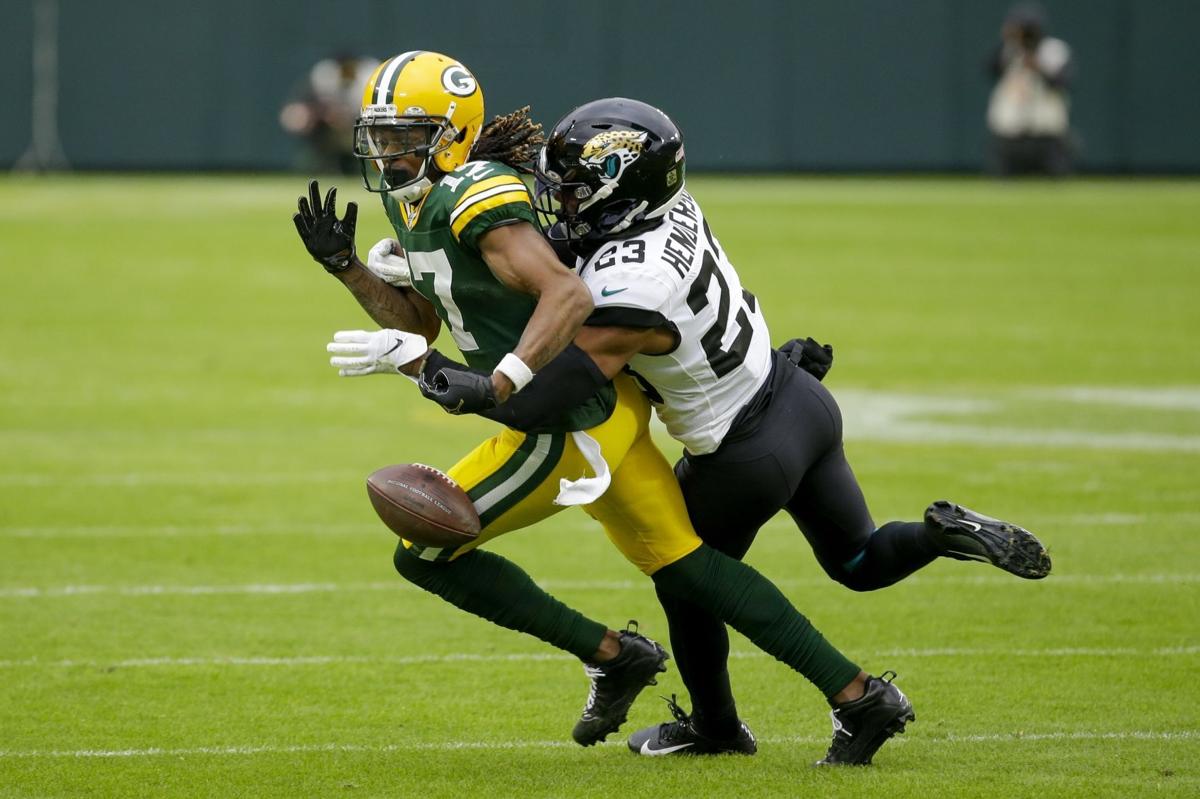 Jaguars' C.J. Henderson knocks the ball away from Packers' Davante Adams during the second half Sunday. The Jaguars recovered the fumble. 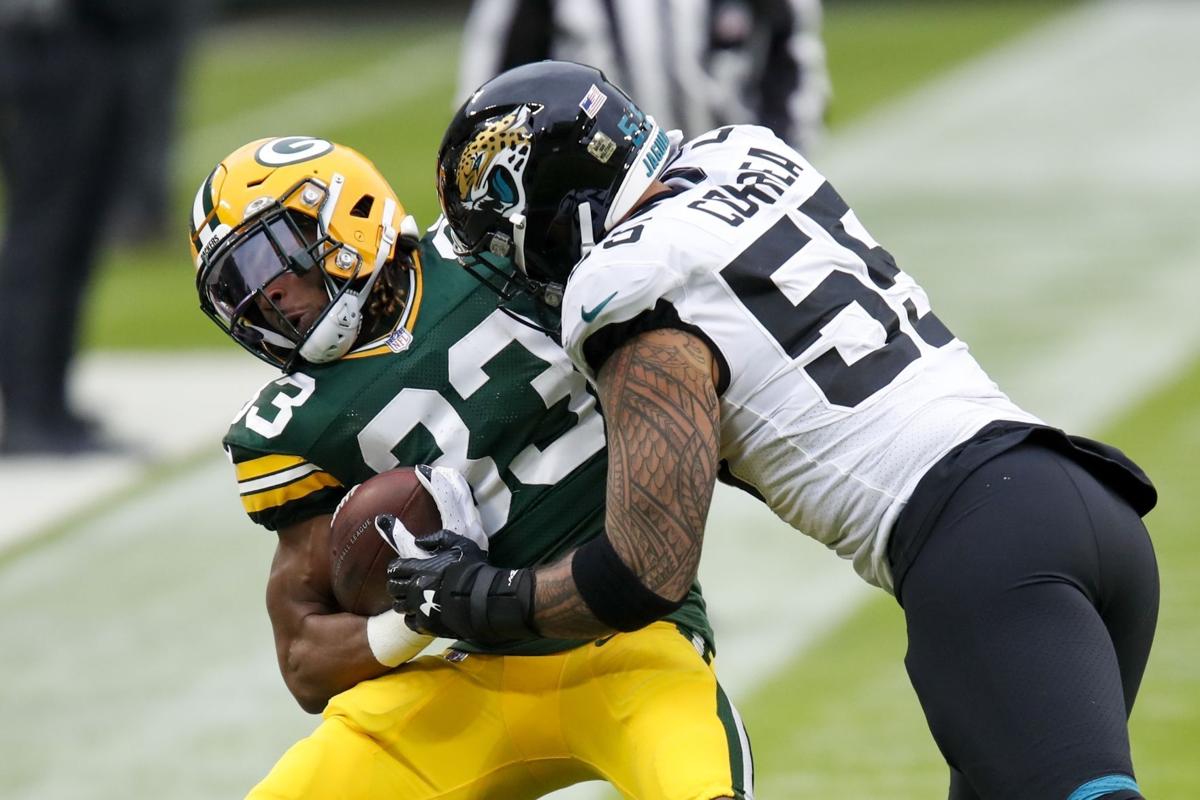 Jaguars' Kamalei Correa stops Packers' Aaron Jones during the first half Sunday. In two games since returning from a calf injury, Jones is averaging just 3.7 yards per carry.

GREEN BAY — If the Green Bay Packers’ matchup with the Indianapolis Colts on Sunday is indeed a measuring-stick game for them — and coach Matt LaFleur basically called it just that Friday afternoon — then the Packers will have most, but not all, of their best players at their disposal.

Top wide receiver Davante Adams, who sustained an ankle injury in last Sunday’s victory over Jacksonville but finished the game before being in and out of practice the past three days, was able to practice on a limited basis Friday and was removed from the team’s injury report — meaning he has been cleared to play against the Colts.

“He’s made good progress,” LaFleur said of Adams, who enters Sunday having caught 61 passes for 741 yards and nine touchdowns. “He should be good to go.”

Asked earlier this week if he’d be able to play, Adams replied, “We’re doing all the things right, right now, to make sure I’m as pain-free and not limited come Sunday. That’s where we are.”

In addition to having Adams, the Packers also will have starting cornerbacks Kevin King and Jaire Alexander, who like Adams were removed from the injury report.

Alexander, who missed last Sunday’s game with a concussion that he sustained Nov. 5 at San Francisco, was able to practice fully on both Thursday and Friday. King, who hasn’t played since Oct. 5 because of a quadriceps injury, was a full participant in practice all three days and will return to action as well.

Without King and Alexander last week against Jacksonville, the Packers’ top three cornerbacks were Josh Jackson, Ka’Dar Hollman and Chandon Sullivan, although Hollman suffered a quadriceps injury of his own against the Jaguars and is questionable.

Meanwhile, the Packers had hoped to have No. 2 wide receiver Allen Lazard available for the first time since he sustained a core muscle injury on Sept. 27 at New Orleans. But despite practicing on a limited basis all week, Lazard appears unlikely to play. The Packers listed him as questionable, but LaFleur’s tone wasn’t encouraging.

“He’s been making progress, but again, we’ll see how he’s feeling,” LaFleur said. “Hopefully, he’ll be able to go. But again, I think it’s going to be more something we’ll figure out on Sunday.”

The Packers did rule out running back/returner Tyler Ervin, who sustained an injury to his ribs against Jacksonville. Ervin had been battling a wrist injury earlier this season that had him in and out of the lineup.

LaFleur and quarterback Aaron Rodgers had been hoping to get Lazard back this week, which would have given the offense its three most potent weapons — Adams, Lazard and running back Aaron Jones — on the field together for the first time since Adams sustained a hamstring injury during the third quarter of the team’s Week 2 win over Detroit.

For his part, Jones isn’t giving up hope just yet.

“I think we can pick up right where we left off,” Jones said. “We have a great offense and not just us three guys, but we have so many more weapons as well. We’re just excited about being able to go out there and take the field and having all of us out there together.”

Jones knew the questions would be coming, just as they had for center Corey Linsley a day earlier. With left tackle David Bakhtiari having been inked to a four-year, $103.5 million contract extension last Saturday, Jones was just like anyone else — wondering who, if anyone, might be next. Jones, Linsley, King and No. 2 running back Jamaal Williams are all in the final years of their current contracts, as was Bakhtiari and nose tackle Kenny Clark, who signed a four-year, $70 million extension in August.

Linsley said Thursday he was effectively focusing on his day-to-day work and not stressing over the uncertainty — although his wife, Anna, wasn’t doing quite as well.

Jones, though, admitted that he hasn’t been able to completely block out thoughts about his future. Jones enters Sunday’s game having gained 724 yards from scrimmage and scored seven total touchdowns, although in his two games since returning from a calf injury, he has carried 28 times for only 104 yards (3.7-yard average) and caught 10 passes for 70 yards. He hasn’t scored a touchdown since coming back from the two games he missed.

“I think I’ve been doing pretty well (at not being distracted),” Jones said. “You always have that thought in the back of your head, ‘This can be life-changing. I can take care of my family forever.’ Those little things creep into your head.

“But you know, eventually, time will run its course and everything works the way that it’s supposed to. God’s got me, so I just leave it in his hands.”

Davante Adams is dealing with an injured ankle and fellow wide receiver Allen Lazard is not guaranteed to be activated from injured reserve.

Green Bay Packers quarterback Aaron Rodgers said he “wasn’t real, real happy” about the negotiations leading to the most recent NFL labor agreement as he discussed why he’s no longer a team player representative.

Who’s next? After locking up David Bakhtiari, Packers GM Brian Gutekunst has more work to do

Getting defensive? Packers — and defenses league-wide — aim to stem the rising scoring tide

The Colts come into Sunday's game against Green Bay No. 1 in the 32-team NFL in total defense (290.4 yards per game) and fourth in scoring defense (19.7 points per game).

Unfortunately for Aaron Rodgers and the Packers, what they got from Marquez Valdes-Scantling during Sunday’s OT loss to the Colts was exactly what they’d gotten from him leading into Sunday: Inconsistency.

Jaguars' C.J. Henderson knocks the ball away from Packers' Davante Adams during the second half Sunday. The Jaguars recovered the fumble.

Jaguars' Kamalei Correa stops Packers' Aaron Jones during the first half Sunday. In two games since returning from a calf injury, Jones is averaging just 3.7 yards per carry.