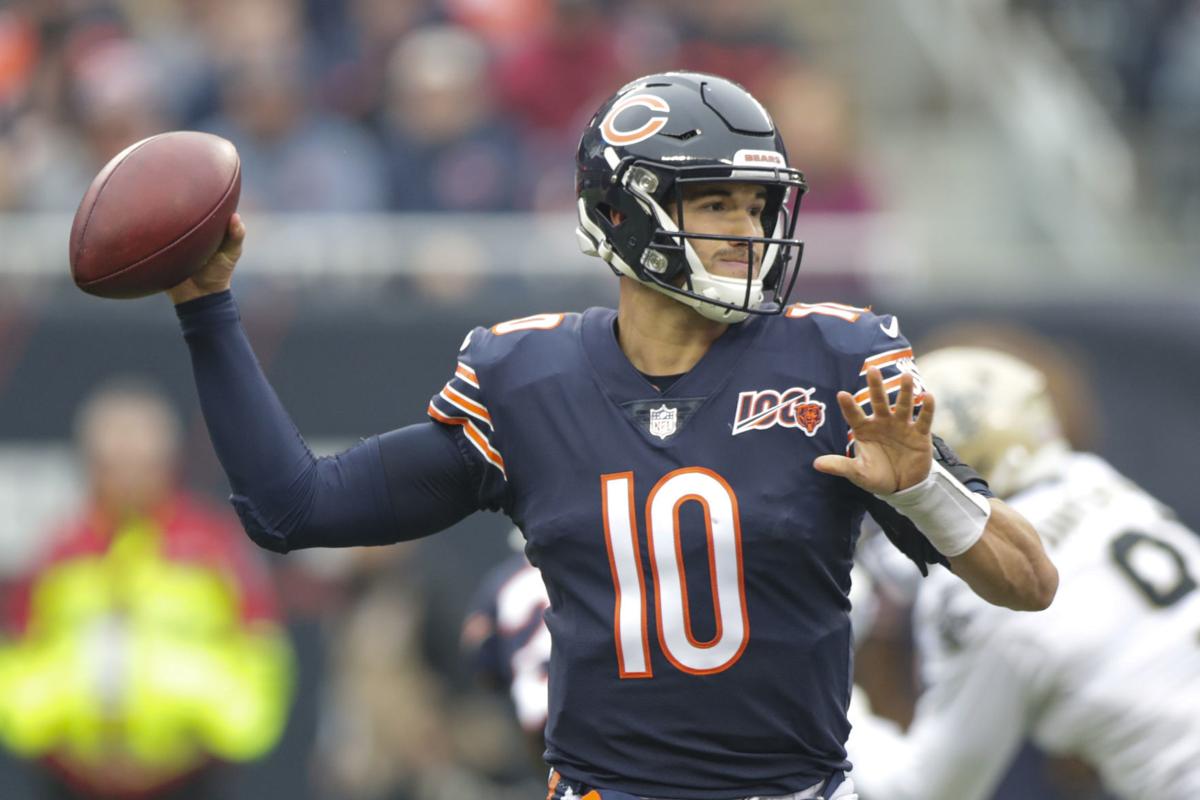 Quarterback Mitchell Trubisky can take heart that the team turned its season around from a 3-3 start a year ago with a 9-1 finish. Chicago is again off to a 3-3 start. 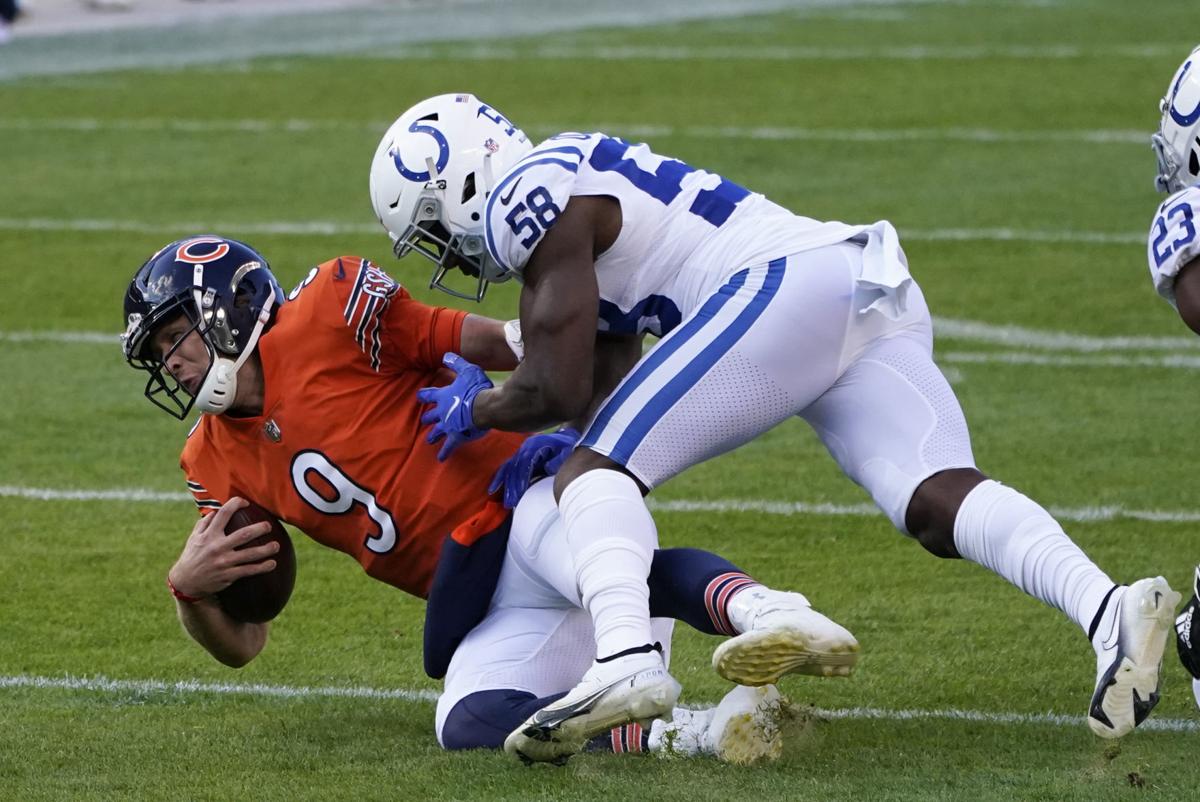 Chicago Bears quarterback Nick Foles is tackled by Indianapolis' Bobby Okereke during the first half on Sunday, Oct. 4, 2020 in Chicago.

It’s looking more like Trubisky will play, though, and at least the Bears know with certainty will have starting running back David Montgomery after he missed their fourth straight defeat against the Minnesota Vikings on Nov. 16 due to a concussion.

Foles did not practice Wednesday due to a glute and hip injury suffered against the Vikings, and he also missed Monday’s practice. Trubisky was able to go both days despite a shoulder injury he suffered Nov. 1.

“It’s day to day right now with Nick,” Nagy said. “So with him not practicing, Mitch got all the reps today and I thought he did a good job. It was good to see him out there, and he looked good, and the tempo and the rhythm was good.”

Nagy said he’d have no problem taking the decision until late in the week, and doubts it will impact receivers or others on offense because they've played with both quarterbacks.

“I think that they understand where both these guys are at with their injuries and health, etc.," Nagy said. "They don't really get into that too much. That’s not something that they ask questions about. They just kind of roll.”

Foles has started seven straight games and the Bears have gone 2-5, losing the last four. He led a 16-point comeback in the fourth quarter against Atlanta in Week 3 after replacing an ineffective Trubisky. The Bears won the first two games before benching Trubisky.

Trubisky is a scrambler and Foles a pocket passer, so Nagy acknowledged he does gain an edge by waiting to select a starter because Green Bay has to prepare to face two different style quarterbacks.

Nagy said if it is Trubisky playing, it’s possible Bears fans will notice a changed player because he benefited by being benched and watching the team — for the first time since the first few weeks of his rookie year.

“At times, when you think it’s the worst feeling in the world what you’re going through, sometimes those moments are the best thing that ever happened to you,” Nagy said. “I don’t know if that’s the case.

Getting Montgomery back can’t hurt regardless. His first NFL concussion was bad enough Cordarrelle Patterson had to play for him against Minnesota.

“I’ve never had one this severe,” Montgomery sad. “It was definitely different, but I’m fine now.”

The Bears haven’t been able to run the ball at all, but they’re not blaming this on Montgomery. Montgomery has averaged just 3.2 yards after the second game, but offensive line injuries and problems synching the blocking scheme with different quarterbacks has hurt. He thinks it’s not too late to make the running game work.

“There’s always that light at the end of every tunnel I’ve been through,” Montgomery said.

The Bears are last in the NFL in rushing and Montgomery has gained 472 yards on 131 carries for a 3.6-yard average.

“You just keep coming out here every week, going to work and focus on that, what you can control, and going out there being a great team guy, being sure that we stay on top of things, because it will turn, whether anybody wants to believe it or not,” Montgomery said.

While Aaron Rodgers was critical of the Packers' engagement level in a Nov. 1 loss to the Vikings, Matt LaFleur vented about his team’s “juice” in a Nov. 15 win over Jacksonville, though he later said he might have overreacted in the immediate aftermath of the game.

The Bears defense has allowed an average of just 20.9 points through 10 games, ranking sixth in the NFL and keeping Chicago in just about every game this season.

Marquez Valdes-Scantling on moving on after fumble: ‘I can take the good days with the bad days’

Marquez Valdes-Scantling's costly fumble in Sunday's overtime loss to the Colts came one week after his career-best game.

Bears coach Matt Nagy and his staff are spending the bye examining how their offense has spiraled to become one of the worst in the NFL.

At this point, none of the tweaks or major changes the Bears have made to their offense in 2020 have produced different results than the mess that ruined 2019.

Gone but not forgotten by ex-teammates, Jimmy Graham’s impact on Packers went beyond limited production

“I definitely would not be here without Jimmy, for sure. On and off the field,” said tight end Robert Tonyan, who enters Sunday night’s game having caught 32 passes for 391 yards and six touchdowns during a breakout season.

The Bears are expected to turn back to Mitchell Trubisky this weekend, readying him to be their starting quarterback for Sunday's Week 12 game against the Packers at Lambeau Field.

Back as starter for Packers Sunday, Bears' QB Mitchell Trubisky says benching 'felt like a blind side'

After months of running the scout team, Mitchell Trubisky will have another shot at starting for at least one game when the Bears face the Packers on Sunday night.

Quarterback Mitchell Trubisky can take heart that the team turned its season around from a 3-3 start a year ago with a 9-1 finish. Chicago is again off to a 3-3 start.

Chicago Bears quarterback Nick Foles is tackled by Indianapolis' Bobby Okereke during the first half on Sunday, Oct. 4, 2020 in Chicago.