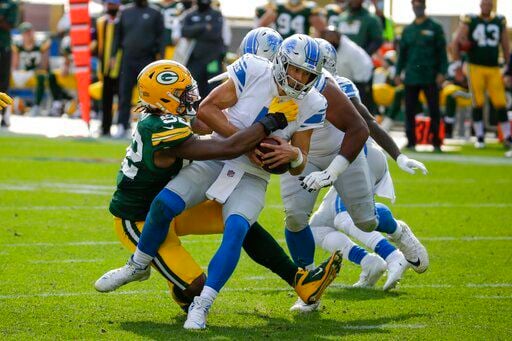 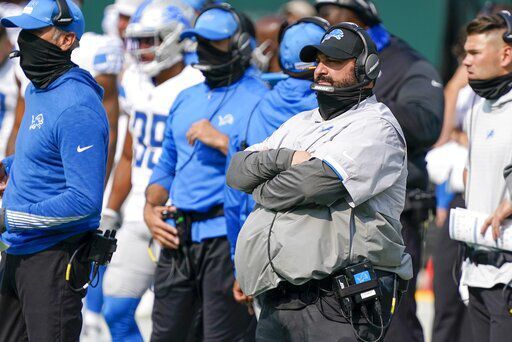 GREEN BAY — This time, the Detroit Lions didn't bother waiting until the fourth quarter to blow a double-digit lead.

The Lions scored touchdowns on their first two series to go ahead 14-3 against the Green Bay Packers but allowed that advantage to disintegrate by halftime. Detroit's 42-21 loss on Sunday came one week after the Lions fell 27-23 to Chicago after leading 23-6 at the start of the final period.

Detroit is the first team ever to blow double-digit leads to lose four consecutive games, according to the Elias Sports Bureau.

"We know what we did, we know what we've done in the past and at the end of the day, we're working to correct those mistakes and right those wrongs," running back Kerryon Johnson said. "That doesn't need to be said from anybody. We're all grown men. We all understand this is a grown man's game. We're going to go out there next week and we're going to try and get the job done again."

The Lions are hurting in every respect.

The Lions' thin secondary made plenty of costly mistakes.

Detroit seemed likely to take a lead into the locker room when Green Bay got the ball at its own 38 with no timeouts and a minute left in the half while trailing 14-10. Lions safety Will Harris was penalized for unnecessary roughness and a horse-collar tackle on consecutive plays, putting the Packers in scoring position.

An 11-yard touchdown pass from Aaron Rodgers to Robert Tonyan put Green Bay ahead for good with 14 seconds left in the half. Detroit's Matt Prater sent a 57-yard field-goal attempt wide right as time expired.

On the first play of the second half, Aaron Jones scored on a 75-yard touchdown run as he got between Harris and Lions safety Duron Harmon.

The Lions gave up 259 yards rushing (7.4 per carry) Sunday after allowing the Bears to run for 149 yards last week. Jones rushed for a career-high 168 yards.

The mistakes weren't limited to the defense.

Midway through the third quarter, the Lions were at their own 5-yard line when Matthew Stafford felt pressure from Rashan Gary and threw an interception that Chandon Sullivan returned 7 yards for a touchdown. The pick-six extended Green Bay's lead to 31-14.

"Obviously, a huge play in the game I can't make," Stafford said. "I've got to find a way to make sure that we're not giving up points there. If I have to throw an incomplete that looks horrible or find a way to get around and just get the ball out, I've got to do that."

After driving 75 yards on each of their first two possessions, the Lions gained a total of 67 yards over their next six series.

Just like that, another promising start went to waste.

After loss to Packers, Lions embattled coach Matt Patricia backed by his players

The Detroit Lions on Saturday fired Matt Patricia and Bob Quinn, who hired the coach to replace Jim Caldwell, and effectively ended the franchise's attempt to replicate the success the men helped Bill Belichick achieve in New England.