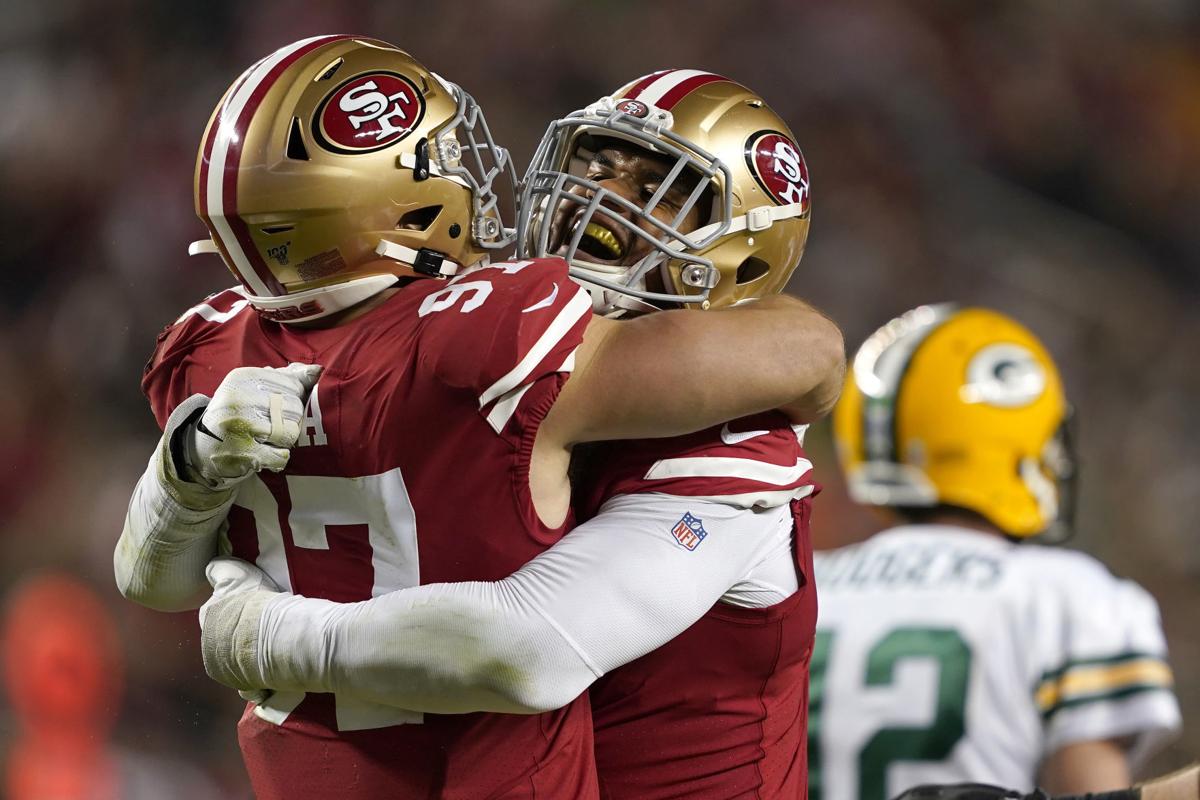 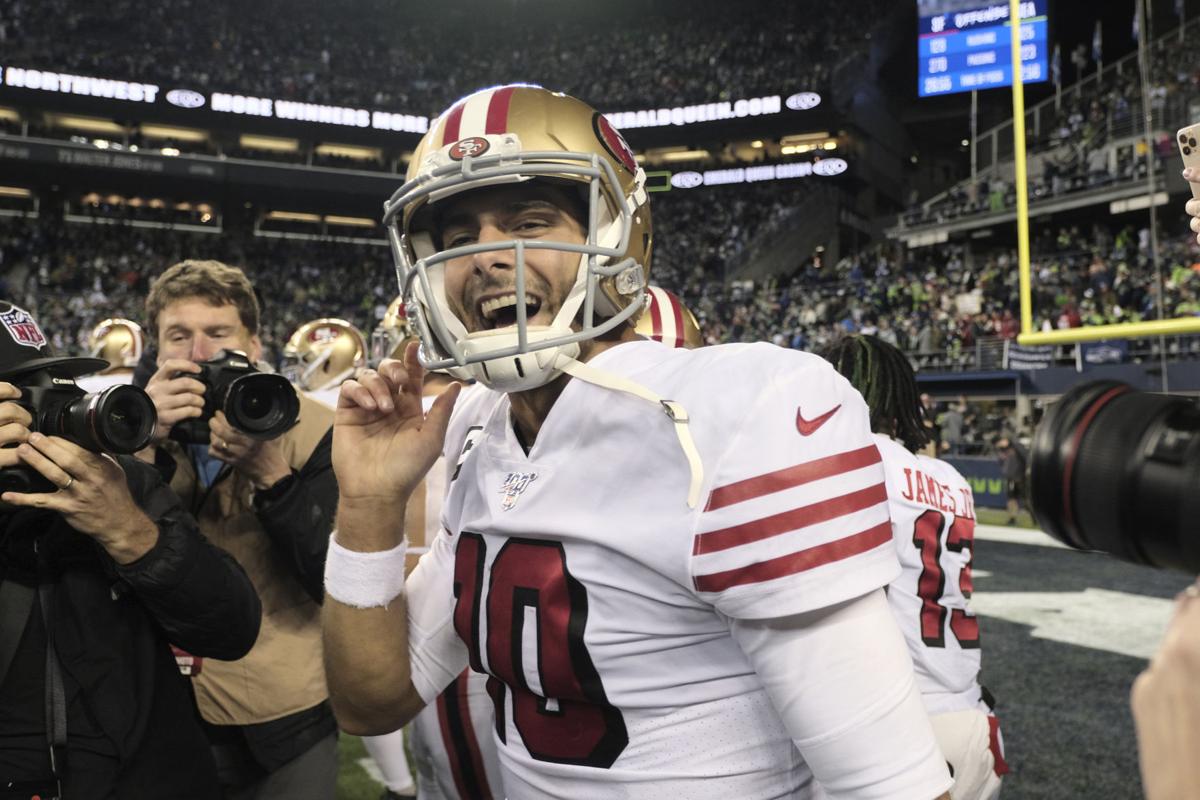 SANTA CLARA, Calif. — One of the first things Nick Bosa noticed about his new team was it probably shouldn't have been picking second overall in the NFL draft. The team, on paper, was better than its record.

"Just being a football fan last year and knowing what kind of players they have on the roster," Bosa said Wednesday. "I didn't know to this extent how good the depth was and stuff like that. But I just knew that of the top teams picking, this was definitely the most playoff-ready team."

The 49ers, of course, finished the 2018 season with a 4-12 record largely because franchise quarterback Jimmy Garoppolo went down three games after signing his $137.5 million contract. They entered the year with playoff expectations after Garoppolo's exciting 5-0 finish to the previous season after being acquired in the Patriots trade. Getting Bosa — and everything it had led to — has given Garoppolo and his team a silver lining to his injury.

Put another way, the lost season produced one of the team's most valuable players.

"Things have a way of working out," Garoppolo said. "I always told myself it was a blessing in disguise, the ACL and everything. We got Bosa out of it. So that's a pretty good trade off I guess."

Now, after Garoppolo's first full regular season as a starter, San Francisco is playing Sunday in the NFC Championship Game against the Green Bay Packers following the 13-3 finish to 2019. Bosa's addition is a key factor in the defense ranking No. 1 in the NFL against the pass, allowing 167 yards per game.

Bosa was arguably the best player on the field during the team's 27-10 throttling of the Minnesota Vikings and this week was named the Rookie of the Year and Defensive Rookie of the Year by the Professional Football Writers of America. He finished the regular season with 9.0 sacks and had a pair of Kirk Cousins in his postseason debut.

"Everything happens for a reason," 49ers coach Kyle Shanahan said. "And you need to get good players in, some difference makers, and Bosa's definitely been a difference maker. I'm very glad we have him. I don't wish 4-12 on anybody. But after going through it, it was nice what it brought us."

Bosa, in the 38-7 victory over the Packers in November, sacked Aaron Rodgers once and recovered a fumble from Rodgers forced by linebacker Fred Warner during the first series. It set up San Francisco's touchdown on the first offensive snap from the 2-yard line.

The 49ers limited Rodgers to just 104 yards on 20 of 33 completions. His 3.2 yards per attempt was the lowest average in any start of his career.

Green Bay that night lost starting right tackle Bryan Bulaga to a knee injury in the first quarter which helped San Francisco generate five sacks of Rodgers, though the 49ers were missing pass rusher Dee Ford due to a bothersome hamstring injury. Bulaga was a limited participant in the Packers' practice on Wednesday after sitting out the Divisional Round game against the Seattle Seahawks due to an illness.

Bulaga, who's been in the league since getting drafted in the first round in 2010, is expected back on the field Sunday giving Green Bay their duo of talented tackles opposite David Bakhtiari.

"I feel like being a veteran at tackle is probably the most advantageous because just all the savvy little tricks they have," Bosa said. "He's faced tons of good rushers over the years, just like their left tackle. It's going to be even more difficult with him on the field."

So, did you hear "woo guy?" Twitter erupted during Sunday night's televised football game between the Green Bay Packers and Seattle Seahawks b…

The Packers' trip to San Francisco with a Super Bowl berth on the line is treated as all business.

Hot? Not? However you view Packers' Aaron Rodgers, he has Super Bowl in his sights

At age 36 and nine years removed from his last trip, Aaron Rodgers seemed amused Wednesday that many of his younger teammates have taken up a win-one-for-the-old-guy mantra on his behalf.

Some answers, lots of questions for NFC, AFC title games

After a wild weekend of historic offensive performances by Derrick Henry and nearly every Kansas City Chiefs player, spiced by some timely defense from all the winners, we have a whole lot of questions heading into the NFL's Final Four.

Super Bowl winning coach guaranteed to be a first-timer

George Kittle's 197 catches and 2,664 yards receiving rank as the most ever by a tight end through three seasons, but it's his ability as a run blocker that truly sets him apart.

Gary Peterson: Packers have big advantage at QB, but 49ers are better team

Even though Jimmy Garoppolo may be far from Aaron Rodgers, more than any other sport, football is a team game.

49ers looking to reach historic turnaround with win over Packers

With a victory in the NFC championship game, the Niners will become the second team in NFL history to make the Super Bowl a year after losing at least 12 games.

Again in playoffs, Aaron Rodgers facing off with Richard Sherman

In the eight times their teams have played each other, Aaron Rodgers has completed only 13 passes for 138 yards against Richard Sherman, targeting him just 23 times.

With the Green Bay defense failing to lay a hand on 49ers running back Raheem Mostert for much of the first half and the Aaron Rodgers-led offense committing two turnovers and failing to convert a third down yet again during a scoreless first 30 minutes, the Packers dug themselves a 27-0 halftime deficit on their way to a demoralizing 37-20 loss.

Packers notes: Despite loss, 2019 was ‘special’ season for Aaron Rodgers ‘because it became fun again’

Tom Oates: Loss to dominant 49ers proves Packers still have lots of work to do after promising season

In the end, the message was clear. The Packers made great strides this season under first-year coach Matt LaFleur and showed they can compete with every other team in the NFC, but they're not in the 49ers' league. Not yet, anyway.