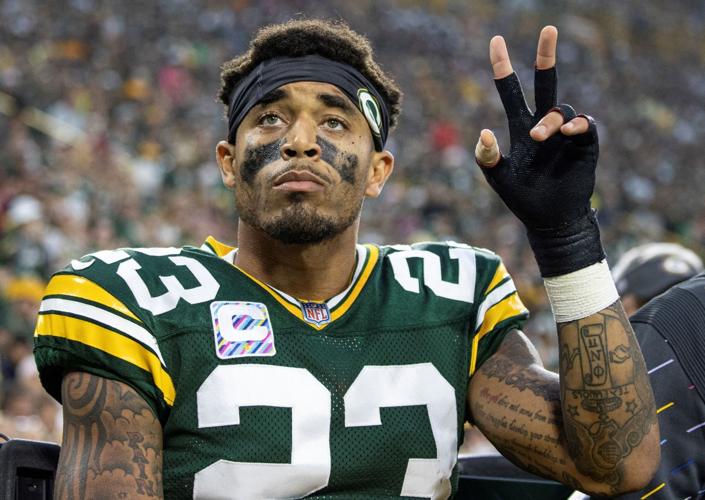 Packers cornerback Jaire Alexander waves to fans as he is carted off the field against the Steelers on Oct 3 at Lambeau Field. 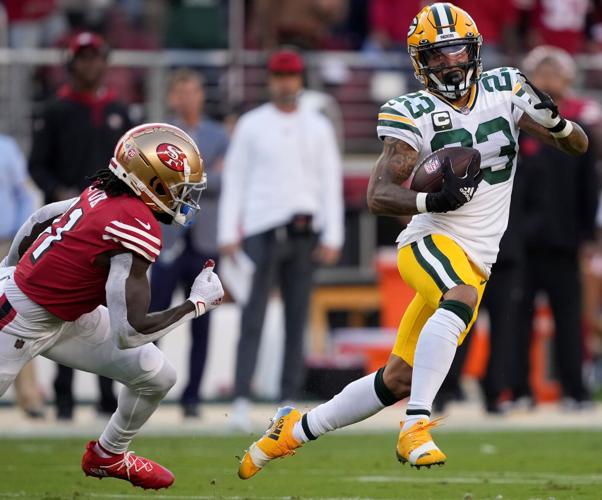 GREEN BAY — Jaire Alexander tried not to get emotional. The Green Bay Packers were kicking off training camp last summer, and their emerging star cornerback had finally received the respect he always felt he’d earn.

The 2018 first-round draft pick, coming off a season in which he’d been named second-team All-Pro and been picked for the Pro Bowl, was finally getting his due. While the Packers had come up short in their quest for a Super Bowl berth, it wasn’t as if Alexander hadn’t done his part, intercepting legendary quarterback Tom Brady not once but twice in the Packers’ NFC Championship Game loss to the Tampa Bay Buccaneers.

Now, Alexander was almost six months removed from that game, and he’d been asked to contemplate what all the honorifics from the previous season meant to him.

“I’m just thankful that everyone else gets a chance to see what I always thought I was,” Alexander said after a long, deep breath. “I love the love. Because that’s something that was rarely received to me. It’s cool, but at the same time, it’s also humbling, because I know where I came from, so it always pushes me.”

On Monday, despite a disappointing 2021 in which he spent more than half the season sidelined by a significant right shoulder injury, the kid who’d been lightly regarded coming out of high school in the Charlotte, North Carolina area, the undersized but tenacious defender whose fearlessness had led in part to that injury, got some more love — this time, in the form of a four-year, $84 million extension.

Mike McCarthy to return to Lambeau to face Packers on Nov. 13

Based on the new money in the deal, Alexander becomes the NFL’s highest-paid cornerback, with an annual average of $21 million per year. The deal includes a $30 million signing bonus while also including just a $1.076 million base salary for this season, allowing the Packers to whittle his salary-cap number down from the guaranteed one-year, $13.294 million he was set to earn on the fifth-year option year of his rookie contract.

And in addition to that cap savings of roughly $6 million it also averts a potentially acrimonious offseason showdown, had Alexander understandably held out of training camp in search a long-term deal and the security it would provide.

ESPN and NFL Network were first to report that the sides were closing in on a deal, and a league source confirmed that Alexander and the Packers were finalizing the extension. The Packers had not formally announced the deal as of Monday afternoon.

Asked in late March how immediate of a priority a deal with Alexander was, Packers general manager Brian Gutekunst replied, “I mean, we’d love to. We’ll kind of see how that goes. He’s such a big part of what we’re doing, he’s been such a good player for us since the day he kind of arrived. We’d love for that to happen. Certainly, we’ve been in communication with his representation and we will continue to be as we go through the year.”

Alexander missed most of last season after suffering a right shoulder injury during a Week 4 game against the Pittsburgh Steelers on Oct. 3. Alexander eschewed surgery in hopes of returning sometime during the season, but he wound up missing the final 13 regular-season games and only returned to the lineup for the team’s divisional playoff loss to the San Francisco 49ers on Jan. 22.

He only played eight of the Packers’ 54 defensive snaps that night and was on the field for the crucial third-and-7 that the 49ers converted on their way to the game-winning field goal as time expired.

Nevertheless, the Packers clearly viewed the 25-year-old Alexander as absolutely vital to a defense where the team has made extensive investments on that side of the ball, from making Kenny Clark one of the NFL’s highest-paid defensive tackles, to extending edge rusher Preston Smith to investing a pair of first-round picks on two Georgia defenders — inside linebacker Quay Walker and defensive tackle Devonte Wyatt — in this year’s NFL draft.

“Obviously, he’s a guy that’s really important to us, one of the premier corners in this league,” head coach Matt LaFleur said after Alexander’s injury, which came while tackling Steelers running back Najee Harris on a fourth-down play during the third quarter of that win over the Steelers.

“We’re hopeful to get him back but as far as the timeline, I just know it’s going to be a while. I know he’ll do everything he can to try to get back because he’s a big part of this football team.”

With the additional salary-cap room, the Packers have about $10 million to work with, even with most of their rookie class under contract. Whether they’ll use that money to bring in a veteran wide receiver to augment that group or squirrel away the cap space for a move during training camp or perhaps at the trade deadline remains to be seen.

“Roster building’s 365. I say it all the time,” Gutekunst said after the draft. “We’ll kind of see what opportunities are out there as we move forward.

“When you draft players at certain positions, specifically high, other players on other teams may become available. We’ll see what’s out there and if we can help our team. What we did in the draft wouldn’t prevent us from trying to help our team at wide receiver or anywhere else.”

NFL Draft: Get to know the newest members of the Green Bay Packers

Notes: Walker, who registered 139 tackles, 11 tackles for loss and five sacks in four years at Georgia, was a one-year starter for the national champion Bulldogs, but he has good speed for his size and excellent length and athleticism and could be a Day 1 starter in Green Bay.

Notes: Wyatt registered 113 tackles, five sacks and 12 tackles for loss in four seasons for the Bulldogs and was regarded as the best three-technique defensive tackle in this year's draft.

Notes: The Packers coveted Watson — trading a pair of second-round picks to move up to select the son of 1993 Packers sixth-round pick Tim Watson — after the younger Watson finished his NDSU career with 105 receptions for 2,104 yards and 16 touchdowns in four seasons, including 43 receptions for 801 yards and seven TDs as a senior last year, despite missing three games with a hamstring injury.

Dream chasers: Packers rookies get to work — and work to move past awe of their first day in the NFL

Eleven draft picks, 14 undrafted free agent signees and 17 tryout players practiced for the first time with the Packers on Friday.

While Christian Watson will be the focus, Packers ‘other’ rookie wideouts look to make impressions, too

Friday's practice gives them the first chance to catch passes as members of the team.

Help (and versatility) wanted: Packers’ approach up front has long been to move college left tackles around

Green Bay added three offensive linemen during this year’s NFL draft: UCLA’s Sean Rhyan in the third round, Wake Forest’s Zach Tom in the fourth round and Penn State’s Rasheed Walker in the seventh round — and all are left tackles.

Packers game in London will be against Giants on Oct. 9

The Packers game in London will be against the New York Giants on Oct. 9 at 8:30 a.m. Central time.

How will Aaron Rodgers connect with his new rookie wideouts? They’re eager to find out

“I know he’s going to be tough on me — and that’s exactly what I want,” Christian Watson said after the Packers picked him in the second round of last week's NFL draft.

After ‘brutal' loss of Jaire Alexander last season, Packers’ Joe Barry thrilled to have star back

As the Packers get set for the kickoff of organized team activity practices next week, Alexander isn’t just healthier — he’s wealthier, too, having reached an agreement on a four-year, $84 million extension earlier this week.

Inside? Outside? With Jaire Alexander leading the way, Packers have options for deploying cadre of cornerbacks

Defensive backs coach/defensive passing-game coordinator Jerry Gray has been cross-training players at all positions during classroom sessions this offseason and will continue to do so once on-field work begins.

Vrable, who had spent four years on the Buffalo Bills’ offensive coaching staff (2013-16), had known Watkins since the Bills had selected him with the fourth overall pick in the 2014 NFL draft.

For Adam Stenavich and Packers’ reshuffled offensive staff, offseason allows chance for ‘working the kinks out’

After three years as the team’s offensive line coach, Adam Stenavich had been promoted during the offseason — his first time being a coordinator.

For most of Aaron Rodgers’ career, he made sure he came to Green Bay for the offseason program, at least until the COVID-19 pandemic struck.

“I think the confidence is there, just watching him process things a little bit quicker than he had before,” veteran wide receiver Randall Cobb said of Jordan Love after Tuesday’s practice.

Get an early look at the newest members of the Green and Gold as Packers rookies and veterans hit the field for practice Tuesday in Green Bay.

“Really the only ‘I’ we want to hear right now is, ‘What I can do to help us win?’ That’s what we’re trying to do with all our players,” Packers special teams coordinator Rich Bisaccia said.

For former Badgers lineman Cole Van Lanen, success with Packers comes down to just one thing

The Green Bay-area native trying to make good for the team he grew up cheering for hit a turning point midway through his rookie season and he believes his confident approach has made him a "different player."

Photos: Green Bay Packers get back to work during organized team activities

Check out the scene from the practice field as the Packers returned from the long weekend to run training camp drills Tuesday in Green Bay.

Packers cornerback Jaire Alexander waves to fans as he is carted off the field against the Steelers on Oct 3 at Lambeau Field.