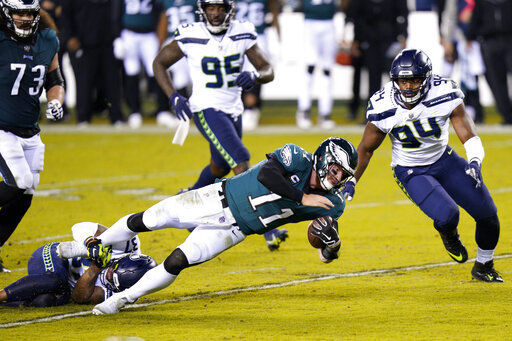 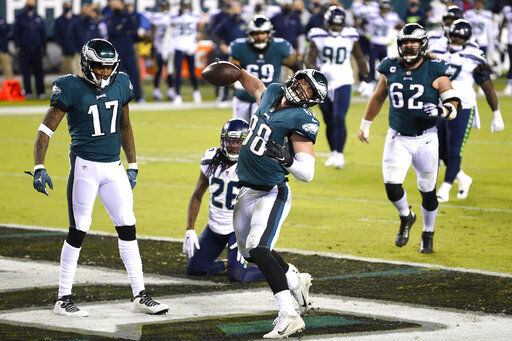 Philadelphia Eagles' Dallas Goedert (88) celebrates after scoring a touchdown during the first half of an NFL football game against the Seattle Seahawks, Monday, Nov. 30, 2020, in Philadelphia. (AP Photo/Derik Hamilton) 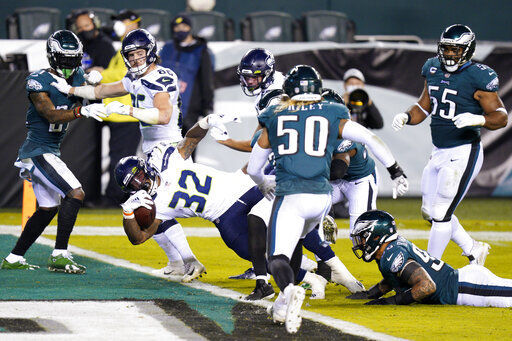 Seattle Seahawks' Chris Carson (32) scores a touchdown during the first half of an NFL football game against the Philadelphia Eagles, Monday, Nov. 30, 2020, in Philadelphia. (AP Photo/Chris Szagola) 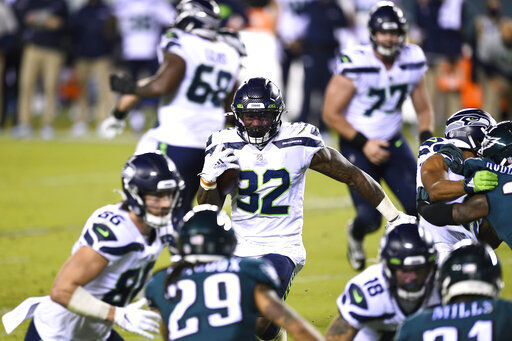 Seattle Seahawks' Chris Carson rushes during the first half of an NFL football game against the Philadelphia Eagles, Monday, Nov. 30, 2020, in Philadelphia. (AP Photo/Derik Hamilton) 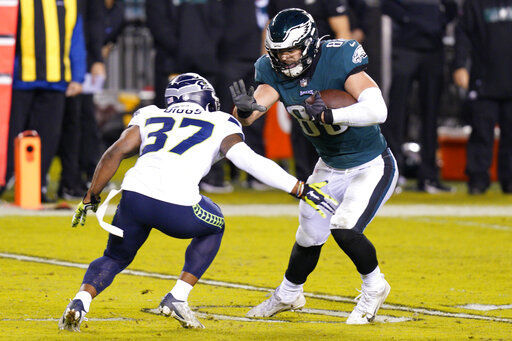 Philadelphia Eagles' Dallas Goedert (88) tries to get past Seattle Seahawks' Quandre Diggs (37) during the second half of an NFL football game, Monday, Nov. 30, 2020, in Philadelphia. (AP Photo/Chris Szagola)

PHILADELPHIA — Three years after winning a Super Bowl, the Philadelphia Eagles are spiraling.

There are questions about coach Doug Pederson’s job security and Carson Wentz’s future as quarterback. But the responsibility for the team’s collapse begins at the top.

The Eagles (3-7-1) have missed terribly in the draft since Howie Roseman regained control of personnel decisions following Chip Kelly’s firing in December 2015.

Metcalf had 10 catches for 177 yards in Seattle’s 23-17 win over the Eagles on Monday night. He already has 1,039 yards receiving this season and nine touchdowns, one more than all of Philadelphia’s wide receivers have combined.

The Eagles took wide receiver Jalen Reagor at No. 21 in this year’s draft. Reagor has 19 catches for 222 yards and one TD in six games, missing five because of injuries. Justin Jefferson went to Minnesota with the next pick. He has 52 receptions for 918 yards and six TDs.

Philadelphia then took quarterback Jalen Hurts in the second round, even though Wentz’s $128 million, four-year contract extension kicks in next year. Running backs J.K. Dobbins and Antonio Gibson were on the board and could’ve contributed immediately to a stale offense.

The draft failures go back further.

Wentz is the only player selected by Philadelphia since 2014 to make a Pro Bowl. No one has been an All-Pro.

The organization’s success rate on top picks has been abysmal since right tackle Lane Johnson and tight end Zach Ertz were the first two selections in 2013.

Pederson has accepted blame for the offense’s dismal performance. Wentz and other players have done the same.

Has the front office communicated to the coach its role in the team’s struggles?

“Those conversations are private,” Pederson said Monday. “I'm not going to get into that. This is not the time or the place to really get into those types of conversations.”

Wentz has been most effective throwing to tight ends and especially on designed rollouts, though those plays haven’t been called much. Dallas Goedert had seven catches for 75 yards and one TD against Seattle, but also turned the wrong way on a fourth-down pass that resulted in an interception in the end zone. Richard Rodgers caught three passes for 53 yards and one TD.

Defensive end Derek Barnett had two stops on fourth-and-2 in the first quarter. He tackled David Moore for a 5-yard loss from the Eagles 2 and sacked Russell Wilson from the Philadelphia 37 on Seattle’s second drive.

Wide receiver Travis Fulgham has four catches on 14 targets in the past three games after an excellent stretch of five games. He had 28 catches for 427 yards and four TDs after debuting with the Eagles on Oct. 4.

Ertz (ankle) could return to action this week.

3 — The Eagles only have three interceptions this season, none from their cornerbacks.

The Eagles visit the Green Bay Packers (8-3) on Sunday. Despite a dismal record, Philly is only a half-game behind the Giants (4-7) and Washington (4-7) in the woeful NFC East.

Are the Green Bay Packers pretenders?

Could Arkansas keep their impressive start going against Texas A&M (-4.5)?

Could Arkansas keep their impressive start going against Texas A&M (-4.5)?

The White Sox are AL Central Champs, but can they make a run?

The White Sox are AL Central Champs, but can they make a run?

Amid expanded protocols, Packers get to work — and contemplate their dire-emergency QB options

Coach Matt LaFleur wouldn't say who would play QB in a pinch but a few players on the roster have high school or college experience at the position.

The Green Bay Packers dodged disaster when they were unable to complete a trade for Houston Texans receiver Will Fuller, who on Monday said he's been suspended for six games for violating the NFL's policy on performance-enhancing drugs.

Ahead of facing Packers on Sunday, Eagles fall to Russell Wilson, Seahawks

DK Metcalf caught 10 passes for 177 yards, Russell Wilson threw for 230 yards and a touchdown and the Seattle Seahawks beat the Philadelphia Eagles 23-17 on Monday night.

Tom Oates grades the Packers' performance as they improved to 8-3 with a 41-25 victory over the Bears in an NFC North showdown Sunday night at Lambeau Field.

Packers quarterback Aaron Rodgers is on pace to be sacked a career-low 16 times.

Tavon Austin, the No. 8 overall pick in the 2013 draft by the St. Louis Rams, hasn’t played any NFL games this season.

With fond memories to take away from Green Bay, nostalgic Aaron Rodgers says, ‘Hopefully, that day isn't too soon’

“If you had told that 21-year-old he'd still be sitting here at 37, I'd be pretty happy about that,” Green Bay Packers quarterback Aaron Rodgers said Wednesday.

Unbeaten Steelers stay on top, Packers rise to No. 4 in AP Pro32 poll

Pittsburgh received eight of the 12 first-place votes for 380 points in balloting Thursday by media members who regularly cover the NFL.

Even at 3-7-1 heading into Green Bay, Eagles still have playoff hopes in sorry NFC East

The Eagles (3-7-1) trail the New York Giants and Washington by half a game in the division as they head to Green Bay for a Sunday matchup with the NFC North-leading Packers (8-3).

Free agent receiver Tavon Austin could be another weapon for quarterback Aaron Rodgers and also in the return game.

Jon Runyan Jr., a sixth-round pick from Michigan, has acquitted himself well the past two weeks, when he’s been called off the bench against Indianapolis and Chicago after Corey Linsley left each game with an injury that led to a reshuffling of the line.

Philadelphia Eagles' Dallas Goedert (88) celebrates after scoring a touchdown during the first half of an NFL football game against the Seattle Seahawks, Monday, Nov. 30, 2020, in Philadelphia. (AP Photo/Derik Hamilton)

Seattle Seahawks' Chris Carson (32) scores a touchdown during the first half of an NFL football game against the Philadelphia Eagles, Monday, Nov. 30, 2020, in Philadelphia. (AP Photo/Chris Szagola)

Seattle Seahawks' Chris Carson rushes during the first half of an NFL football game against the Philadelphia Eagles, Monday, Nov. 30, 2020, in Philadelphia. (AP Photo/Derik Hamilton)

Philadelphia Eagles' Dallas Goedert (88) tries to get past Seattle Seahawks' Quandre Diggs (37) during the second half of an NFL football game, Monday, Nov. 30, 2020, in Philadelphia. (AP Photo/Chris Szagola)