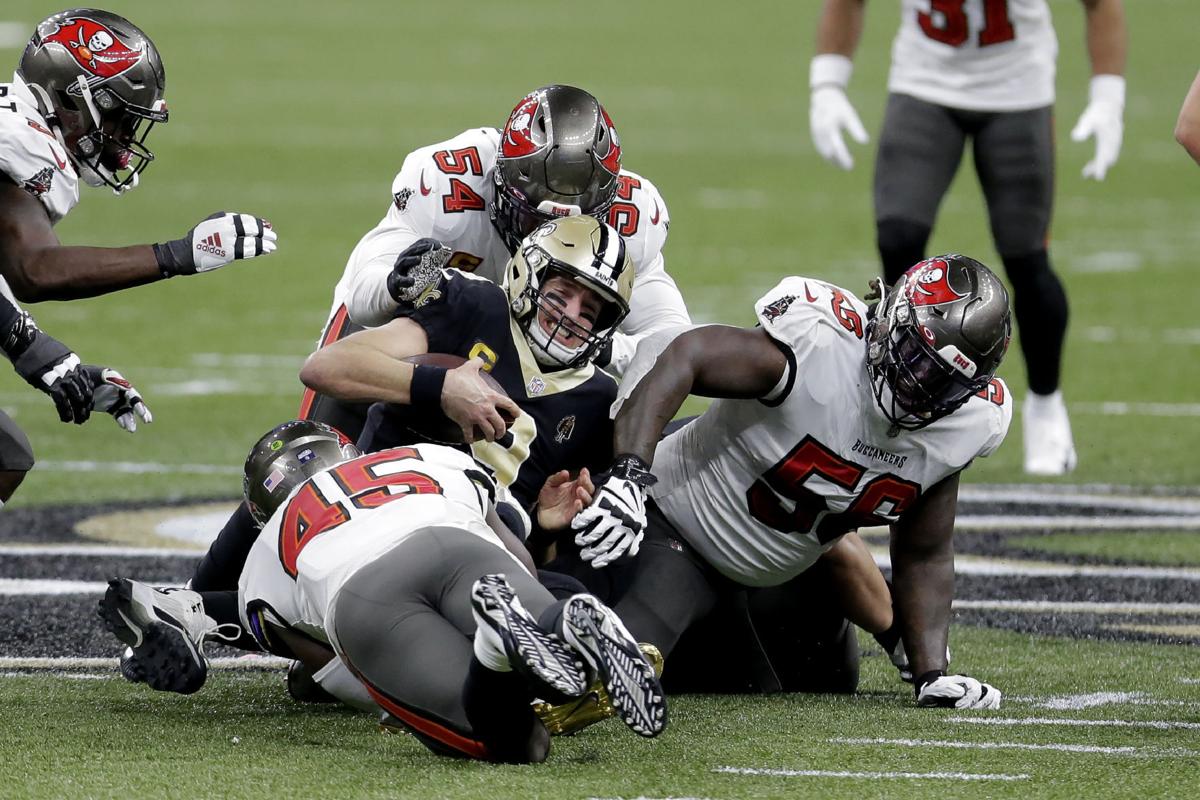 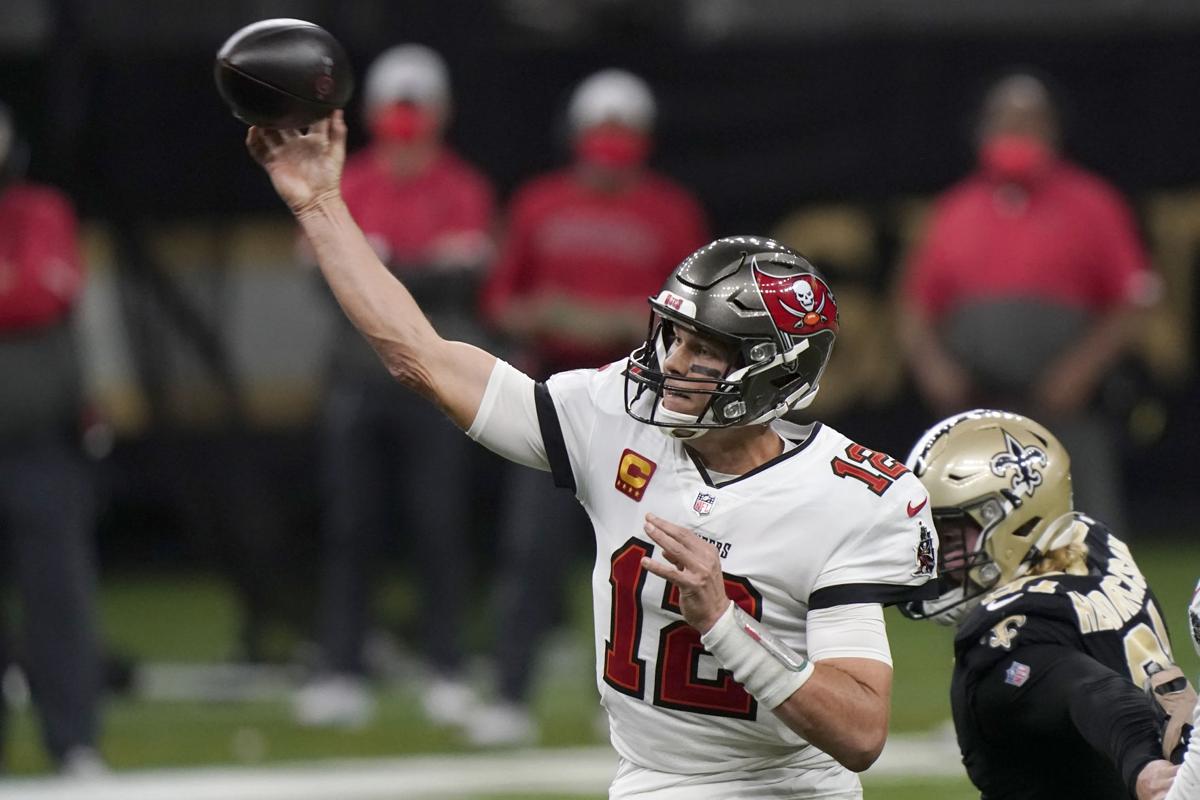 TAMPA, Fla. — Tom Brady's quest for a seventh Super Bowl ring continues, thanks to a young defense that's regained its swagger when the Tampa Bay Buccaneers needed it most.

The Bucs (13-5) advanced to the NFC championship game for the first time in 18 years, with Brady outplaying Drew Brees with plenty of assistance from a rejuvenated defense that forced four turnovers in a 30-20 divisional playoff victory over the New Orleans Saints.

Brady threw for two touchdowns and ran for a third, finishing scoring drives of 3, 40 and 20 yards set up by takeaways by a unit many felt would be a liability in the third meeting of the season between the NFC South rivals.

"They played incredible," said Brady, who is headed to his 14th conference title game — first in the NFC.

"This team has been doing that all year at different times," the 43-year-old quarterback added. "The defense has picked us up, some weeks the offense has been a little bit better. Special teams has been so consistent. The way the defense played (Sunday), they were spectacular."

New Orleans had won five straight over Tampa Bay, including a pair of lopsided wins this season.

While the Bucs led the NFL in run defense for the second straight year, a young secondary featuring three starters in their first or second seasons seemed to regress during a stretch in which Tampa Bay dropped three of four games in November.

Despite going 4-0 over the final month of the regular season and beating Washington in the NFC wild-card round, questions persisted about the pass defense heading to New Orleans, where Devin White, Sean Murphy-Bunting and Mike Edwards had interceptions and rookie Antoine Winfield Jr., forced a fumble that White scooped up to position Brady to throw a tying TD pass in the third quarter.

"We've been fighting adversity all year ... battling the naysayers and those that say we can't do things," Murphy-Bunting said.

"I know one thing," White, a second-year linebacker who was the fifth overall pick in the 2019 draft, added. "We might be young, but we can get after it when we've got our minds set to it."

Brees was limited to 134 yards and one TD passing, while Saints star receiver Michael Thomas was held without a catch. NFL touchdown leader Alvin Kamara had 105 yards from scrimmage, but failed to get into the end zone.

New Orleans scored early in the third quarter to take a 20-13 lead. Four possessions the rest of the way ended fumble, punt, interception and interception.

Now, it's on to Green Bay for a matchup against Aaron Rodgers and the Packers. The Bucs will need another strong defensive performance.

"It's hard to get to this point," Brady said. "There's nothing guaranteed from this point forward, but we've got to go out there and we're going to have to play our very best to beat one of the best teams in the league."

A huge part of advancing to the NFC championship game for the fourth time in franchise history was Brees turned the ball over and Brady didn't after throwing five of his 12 interceptions against the Saints during the regular season. The Bucs have won six straight since their bye week in early December, and they've only turned the ball over twice during that stretch.

Although Brady lauded the overall consistency of the special teams this season, New Orleans' Deonte Harris returned a punt 54 yards to set up an early field goal. Minutes later, Harris had a 67-yarder for an apparent touchdown nullified by penalty.

When it looked as if New Orleans might have an opportunity to take control of the game, Winfield — son of former NFL cornerback Antoine Winfield, Jr. — forced the third-quarter fumble that shifted momentum to Tampa Bay's favor for good.

"I can't say enough about him," coach Bruce Arians said. "To me, he's the defensive rookie of the year."

Receiver Antonio Brown suffered a knee injury against the Saints. He had a MRI on Monday.

One, as in one more road victory needed to become the first team to appear in a Super Bowl in its home stadium. This year's NFL title game will be played at Raymond James Stadium in Tampa, Florida, on Feb. 7.

A chilly date with the Packers in Green Bay, where the weather forecast is for temperatures in the mid-20s and snow.

"You've just got to have some mental toughness, wear some warm clothes and be ready to go," Brady said. "We'll be prepared. The team that plays the best is going to win."

Ted Thompson died on Wednesday night, three days after his 68th birthday and just as a Packers team that bears his fingerprints is again one victory away from a Super Bowl berth.

Packers put Week 6 loss to Buccaneers in rearview, focus on preparation with Super Bowl on the line

"We’ll take what we can from that game and try to learn from it, and apply it where we can in this upcoming game,” Packers coach Matt LaFleur said of the 38-10 loss to Tampa Bay.

Aaron Rodgers up next as Tom Brady moves on, making history with every throw

Tom Brady is one win away from the Super Bowl, two wins away from a seventh ring. And Aaron Rodgers stands in his way.

Tom Brady’s best game in three tries against New Orleans kept the Buccaneers moving on in the NFL playoffs, and has Saints quarterback Drew Brees headed home — perhaps for good.

With Patrick Mahomes out with a concussion, the Chiefs' defense and backup QB Chad Henne enabled Kansas City to survive Cleveland 22-17, keeping their hopes of a Super Bowl repeat alive.

In the Packers' playoff-opening, 32-18 victory over the Rams at noisy — yes, noisy — Lambeau Field, the offense went up against the best defense the NFL has to offer and controlled the game from start to finish.

“I forgot how much you truly, truly miss having a crowd there," Aaron Rodgers gushed after the Packers dispatched the Rams. "It’s hard to really put into words how special that feeling is. But you can feel it. It’s so palpable.”

Packers coach Matt LaFleur was convinced running the ball was vital to winning their NFC Divisional playoff showdown with the NFL’s No. 1 scoring defense, not only to be productive but to set up what he wanted to do in the passing game.

Taron Johnson's pick-6 of Lamar Jackson's pass with 41 seconds remaining in the third quarter helped secure a 17-3 win over the Ravens in a divisional-round playoff game Saturday night.

“Anytime you call on Billy, he steps up and does a great job for us,” offensive line coach Adam Stenavich said.

To beat Green Bay at Lambeau Field and advance to the Super Bowl, it’ll take another superb performance from a defense that until last Sunday had not played a dominant game since it sacked Aaron Rodgers four times and intercepted him twice in a 38-10 rout of the Packers in Week 6.

If Pat Mahomes is cleared to play Sunday, it might be a good week to put defensive backs through plenty of those backpedal-turn-run drills.

Mike Bianchi: A Tom Brady Super Bowl with Bucs would equal 6 he won with Patriots

Tom Brady is already the NFL's GOAT, but if he can take the once-moribund Tampa Bay Buccaneers to a Super Bowl championship, he will be the lion of all GOATs.

No team has ever played a Super Bowl in its home stadium, but Tom Brady and the underdog Bucs (13-5) can do it by winning the NFC championship game against the Packers (14-3) on Sunday.

If Dan Campbell builds the kind of ball-control, physical squad he likes and if the new general manager, Brad Holmes, unearths enough playmakers on defense, the Lions could — maybe should — be relevant in a way they haven't been in decades.

“My future is a beautiful mystery, I think," Packers quarterback Aaron Rodgers said Wednesday. "The present is such a gift to be able to stay in the moment and to have gratitude for being in this situation again."

Only three times previously in the 55-year Super Bowl era — the neutral-site championship began with the 1966 season — have the Packers staged a semifinal at Lambeau Field.

A sincere gentleman: Former Packers GM Ted Thompson's influence felt on and off the gridiron

With former Green Bay Packers general manager Ted Thompson dying Wednesday at age 68, there was an outpouring of support from around the NFL.