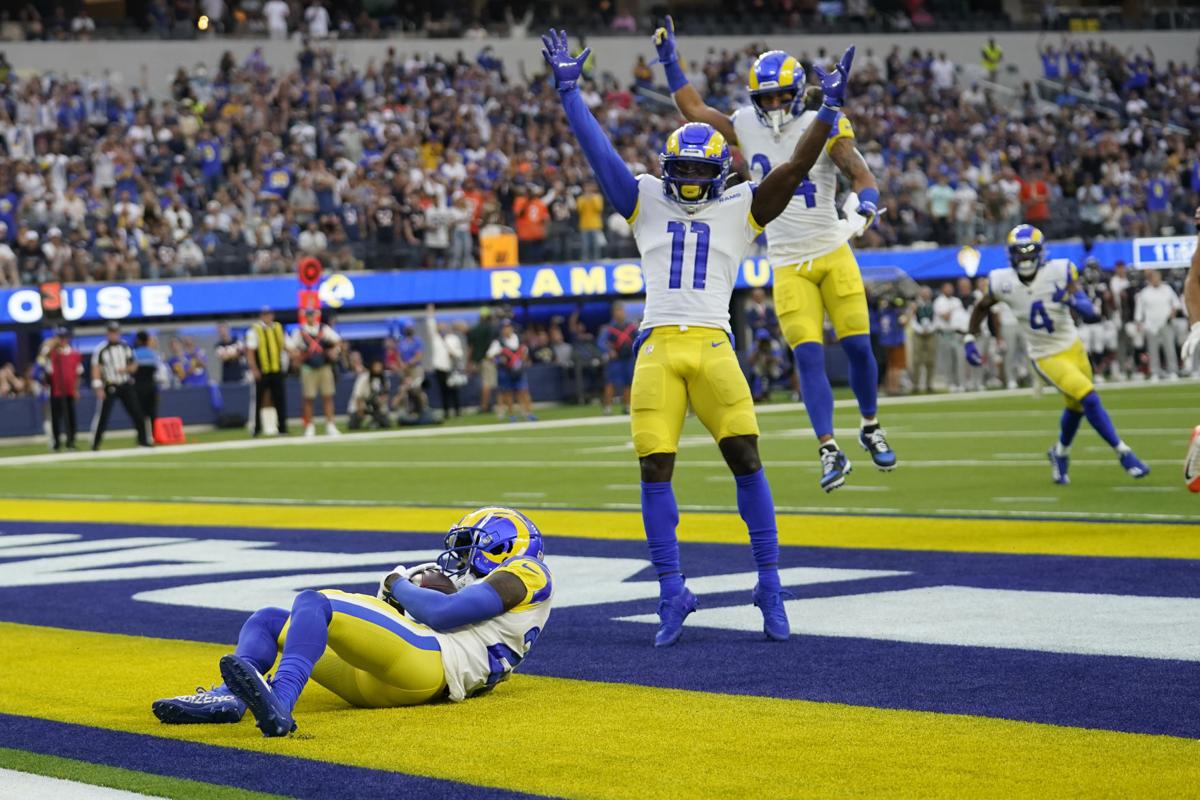 Los Angeles Rams defensive back David Long, left, intercepts a pass in the end zone during the first half of an NFL football game against the Chicago Bears, Sunday, Sept. 12, 2021, in Inglewood, Calif. (AP Photo/Marcio Jose Sanchez) 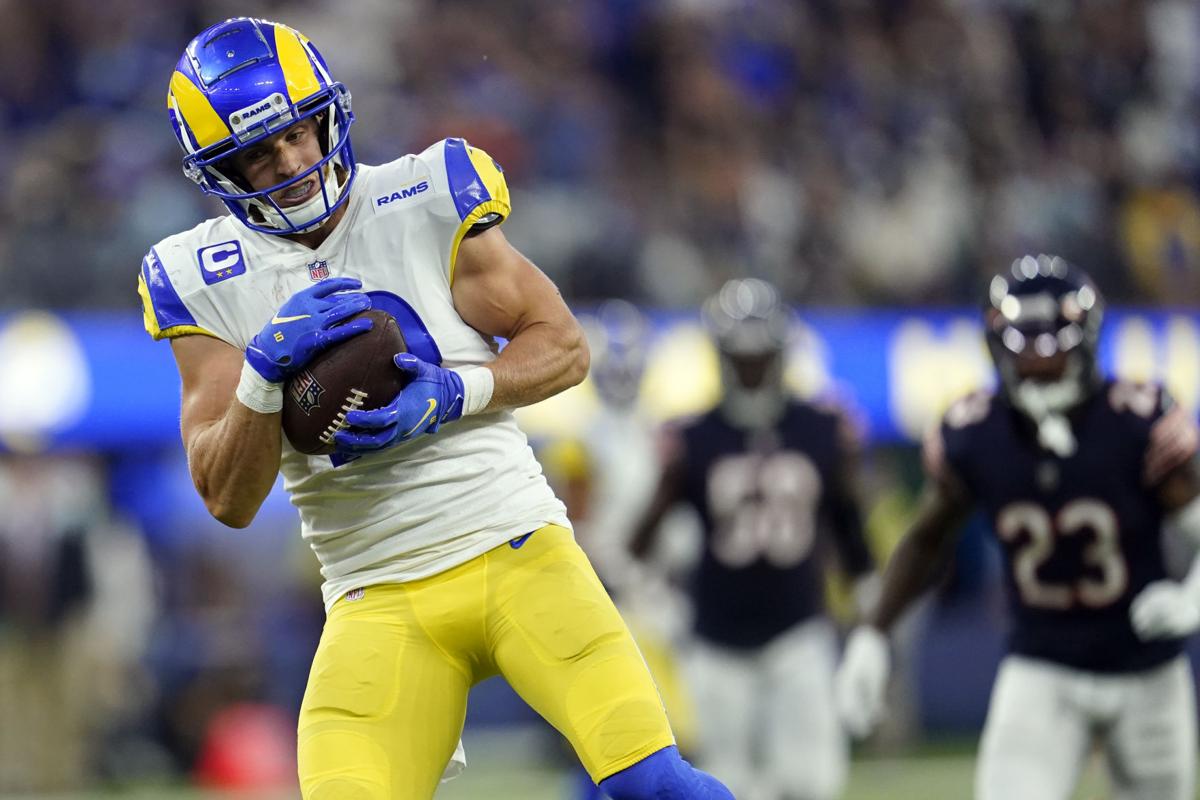 Los Angeles Rams wide receiver Cooper Kupp hauls in a pass on his way to scoring a touchdown during the second half of an NFL football game against the Chicago Bears, Sunday, Sept. 12, 2021, in Inglewood, Calif. (AP Photo/Marcio Jose Sanchez) 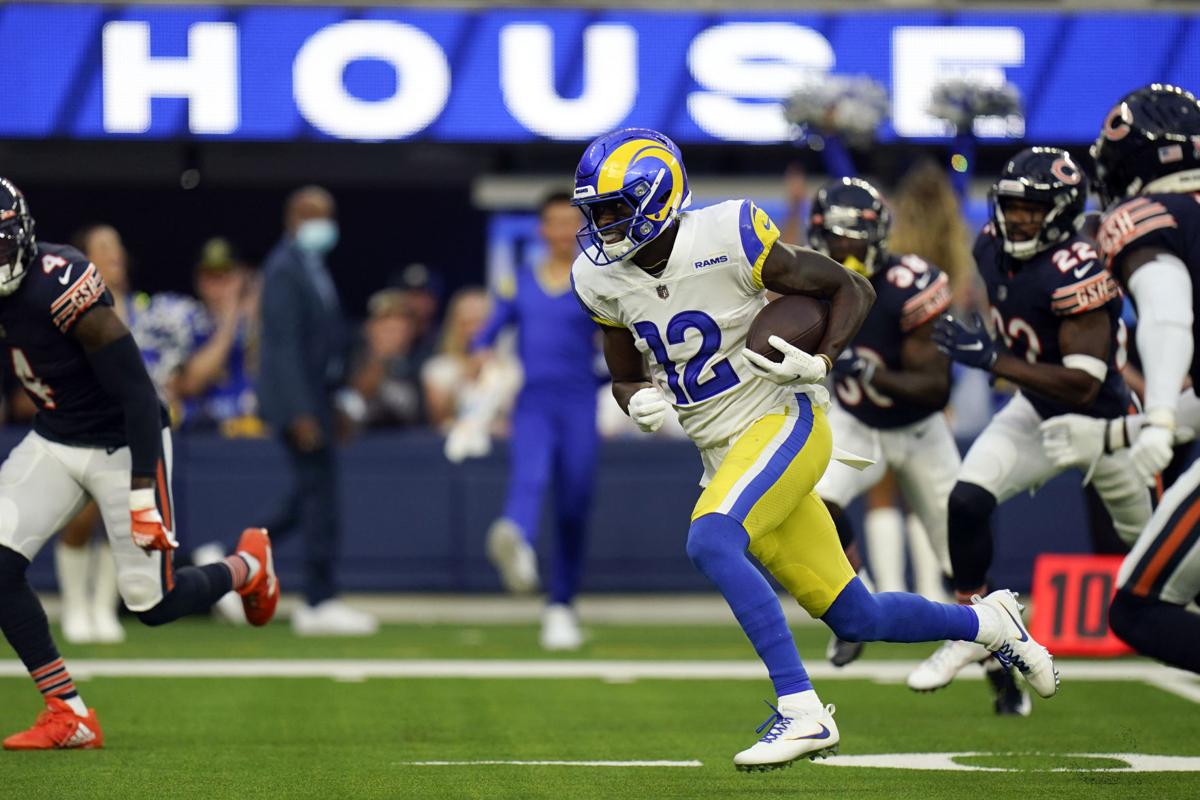 Los Angeles Rams wide receiver Van Jefferson runs on his way for a touchdown during the first half of an NFL football game against the Chicago Bears, Sunday, Sept. 12, 2021, in Inglewood, Calif. (AP Photo/Jae C. Hong) 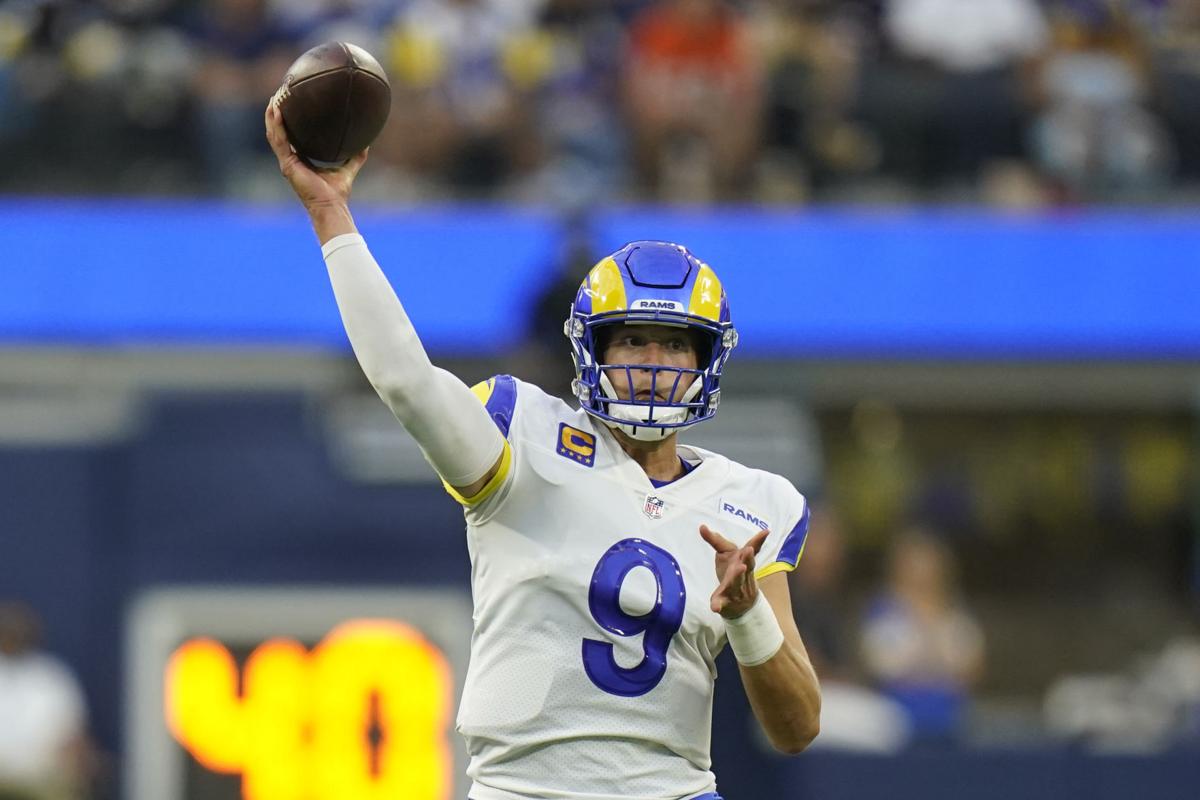 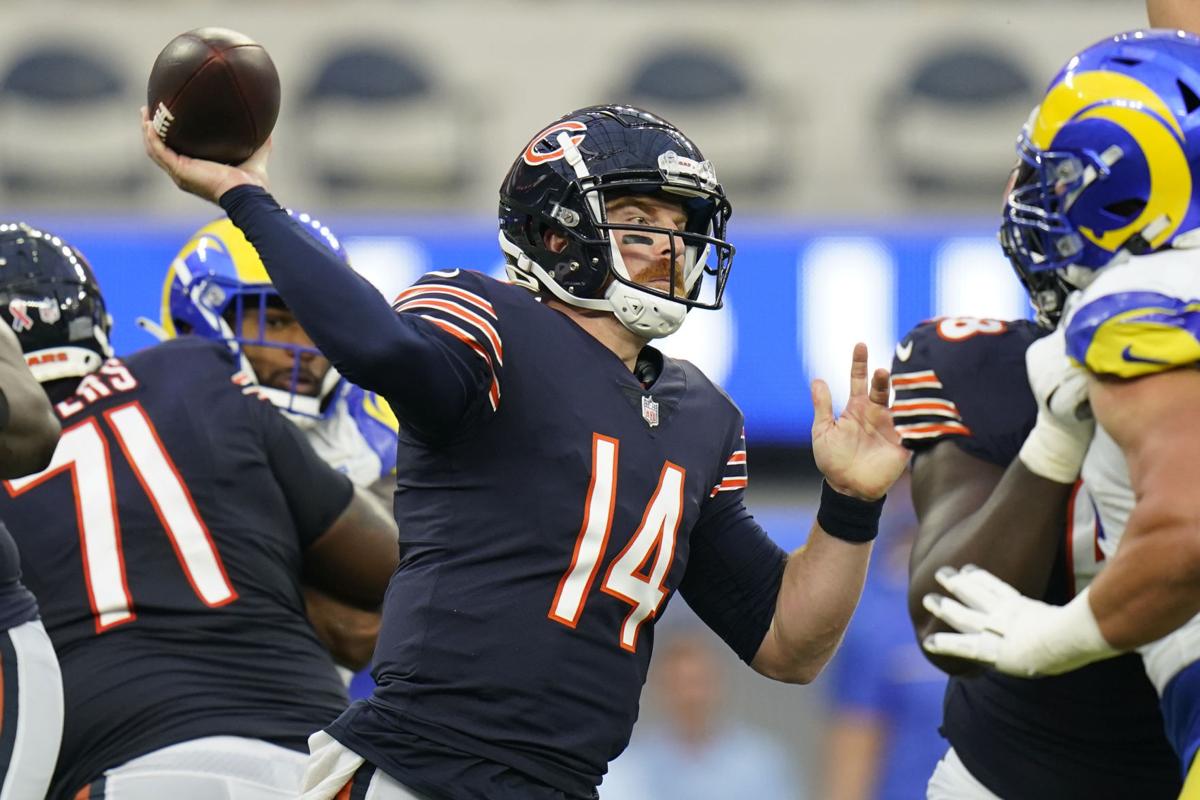 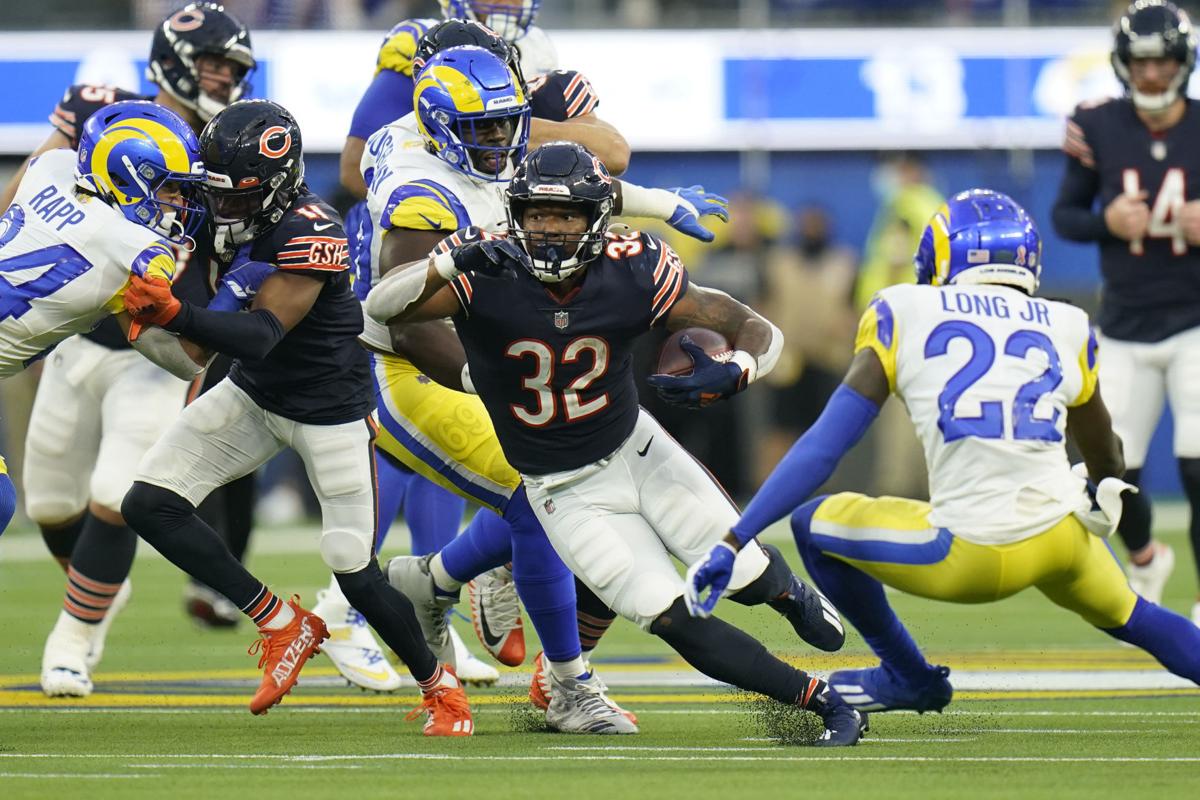 Chicago Bears running back David Montgomery (32) runs with the ball during the first half of an NFL football game against the Los Angeles Rams, Sunday, Sept. 12, 2021, in Inglewood, Calif. (AP Photo/Jae C. Hong)

CHICAGO — The defensive starters who didn't show up for the voluntary offseason program in support of first-year Chicago Bears coordinator Sean Desai — and that was almost every one with the exception of Roquan Smith — didn't show up again Sunday night in the season opener.

Los Angeles Rams quarterback Matthew Stafford had one of the best games of his career in his debut with his new team as he gashed the Bears defense time and time again in a 34-14 victory at SoFi Stadium. Stafford completed 20 of 26 passes for 321 yards and three touchdowns. He was rarely pressured, dropped some dimes when he had to and hit wide-open targets streaking behind the secondary when the opportunity was there.

A close game through the first half turned into a runaway as the limited Bears offense couldn't keep pace with the quick-strike Rams. The Bears surrendered 7.72 yards per play, the fourth-highest average they have allowed over the last 20 seasons, and Stafford averaged a ridiculous 12.3 yards per attempt.

When the Rams were trying to bleed the clock in the fourth quarter, a run defense that had been stout to that point wilted as Darrell Henderson finally got loose. It was an embarrassing performance all the way around, and it stretched well beyond safeties Eddie Jackson and Tashaun Gipson failing to touch down wide receiver Van Jefferson after he scorched Jackson with a double move — using the same concept the Green Bay Packers ran against Jackson with tight end Robert Tonyan for a touchdown last November at Lambeau Field.

That's not to suggest that if highly paid players such as outside linebackers Khalil Mack and Robert Quinn, defensive lineman Akiem Hicks, Jackson and others shown up in May and early June, the Bears would have had a different result. It was their most lopsided season-opening loss since a 49-7 stinker in San Francisco to start the 2003 season.

But it's hard to accept the idea of culture and buy-in when players choose not to participate in offseason practices, especially with a new coordinator and three new position coaches on defense.

"The biggest theme for us would be 'no panic,' " coach Matt Nagy said Monday afternoon. "And just understand that, hey, that was Sean's first game calling (the defense) and this was our first game, and we understand that that's not good enough. We know we want to be better. We want to focus on any of the positives there were. That's why I think we all believe in one another, and now we get another chance this weekend."

That makes sense from the standpoint that panicking wouldn't do the coaches or players any good. It's not like the Bears can make wholesale personnel moves to the 53-man roster. Maybe they'll swap out nickel cornerback Marqui Christian, who they cut in a procedural move before Week 1. But promoting Duke Shelley, who was inactive for the Rams game, wouldn't make the kind of improvement the Bears can get if players such as Mack, Quinn, Hicks, Smith, Jackson and others step up.

The Bears have huge investments on defense and a coordinator who, while he hasn't called plays before this season, isn't in a get-to-know-you phase with his players. They have to be significantly better if they want to compete more than every once in a while.

Talking about culture — the Bears culture has been positively .500 the last two seasons — and using corporate jargon that doesn't apply on the gridiron only will pass the time from one Sunday to the next. The Bears need action, and they need to play with an edge when they host the Cincinnati Bengals on Sunday at Soldier Field.

The Bengals upset the Minnesota Vikings 27-24 in overtime Sunday as Joe Burrow completed 20 of 27 passes for 261 yards and two touchdowns while running back Joe Mixon had 127 yards on 29 attempts.

To be fair, the defense has been the primary reason the Bears have had success when they have won, and carrying that burden weekly can be daunting. But repeatedly blowing assignments against a competitor like Stafford, who will make you pay every time, is not acceptable. Nagy and Desai, when he speaks Wednesday, don't have to throw anyone under the bus, but they need to have some pointed conversations with players.

"We always look at everything each week," Nagy said. "We're also going to evaluate all these players. We need to make sure that everybody that's out there playing in all three phases is doing their job.

"We're all being evaluated each day. You guys have heard me say this before, and I truly believe this, but it's really not an effort thing. But we do need to get it going, right? We need to get that ... energy and that swag back. And they'll do that. I have a lot of belief in our guys."

Swag. There's another nebulous word when it comes to this defense and what the Bears need to accomplish. Desai needs to be better, the players need to be better and there has to be real talk and legitimate accountability.

If not, there will be reason to panic — and there's nothing much the Bears would be able to do at that point.

10 reasons for optimism for Bears, from David Montgomery's emergence to questions for NFC North rivals

The Bears are coming off consecutive 8-8 seasons, reaching the playoffs as the seventh seed in the NFC a year ago, and there is a belief at Halas Hall that big things are ahead despite one of the toughest schedules in the league.

The Bears are casting a covetous glance at a 326-acre parcel of revenue-spinning potential that lies near two interstate highways and a Metra station.

Trading up for a QB sure to be costly for Bears, but they may have little choice

Surely, signing Andy Dalton is Part 1 of a two-part plan, which creates intrigue as you look ahead to the draft.

If the Bears are interested in finding a quarterback on the first night of the draft, they will have to have trade capital ready and a feel for how high up the draft board they'll need to jump to get their guy.

Los Angeles Rams defensive back David Long, left, intercepts a pass in the end zone during the first half of an NFL football game against the Chicago Bears, Sunday, Sept. 12, 2021, in Inglewood, Calif. (AP Photo/Marcio Jose Sanchez)

Los Angeles Rams wide receiver Cooper Kupp hauls in a pass on his way to scoring a touchdown during the second half of an NFL football game against the Chicago Bears, Sunday, Sept. 12, 2021, in Inglewood, Calif. (AP Photo/Marcio Jose Sanchez)

Los Angeles Rams wide receiver Van Jefferson runs on his way for a touchdown during the first half of an NFL football game against the Chicago Bears, Sunday, Sept. 12, 2021, in Inglewood, Calif. (AP Photo/Jae C. Hong)

Chicago Bears running back David Montgomery (32) runs with the ball during the first half of an NFL football game against the Los Angeles Rams, Sunday, Sept. 12, 2021, in Inglewood, Calif. (AP Photo/Jae C. Hong)