At Cowboys intro, ex-Packers coach Mike McCarthy calls Dallas 'most iconic franchise in all of professional sports'
0 comments
Share this
{{featured_button_text}}
1 of 5 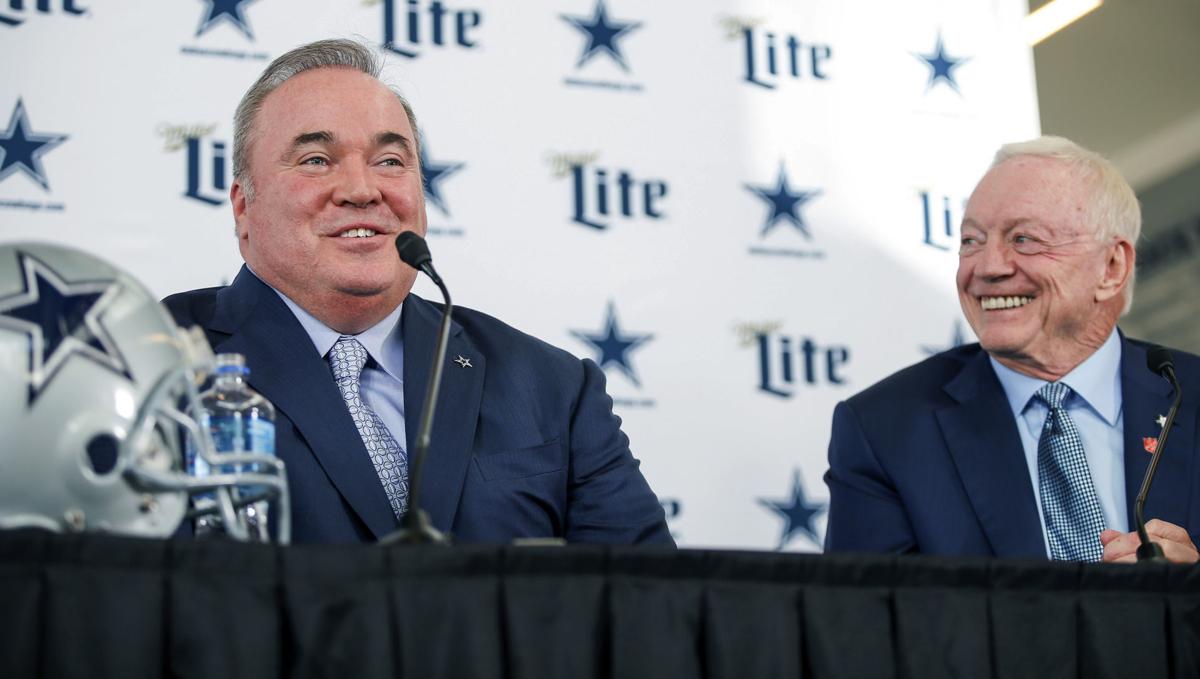 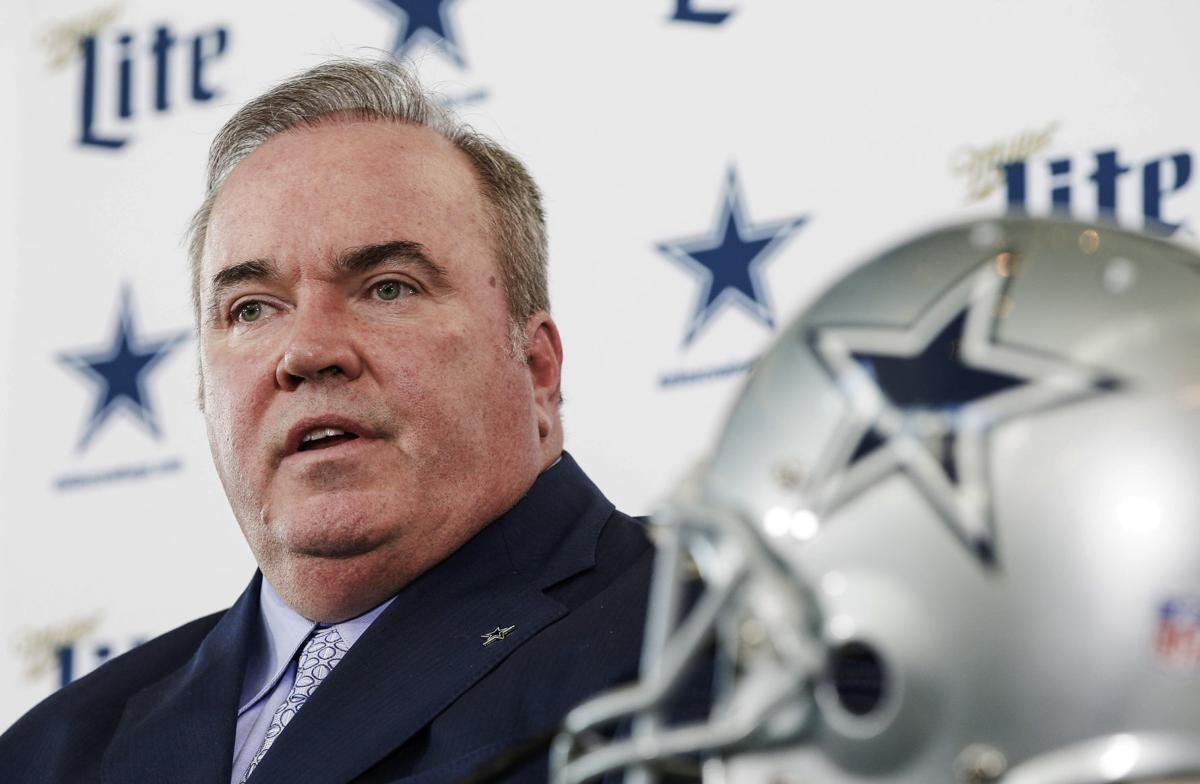 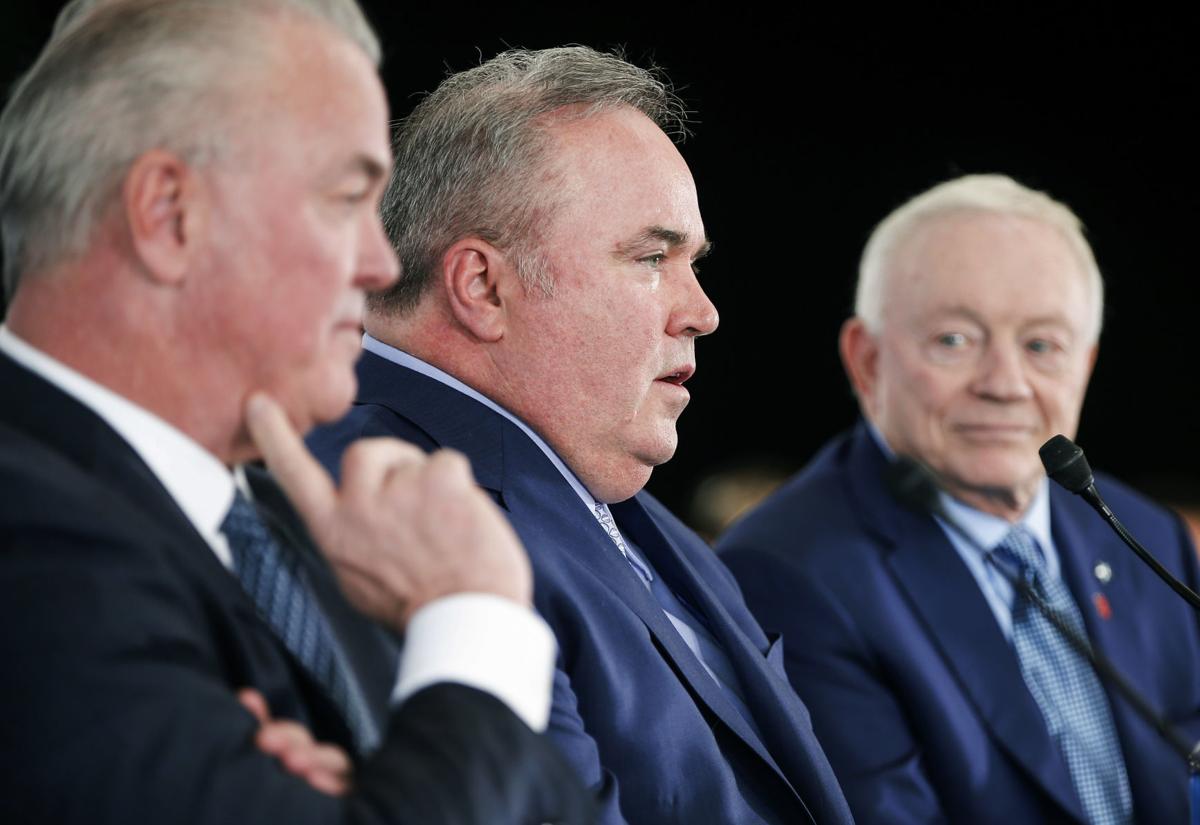 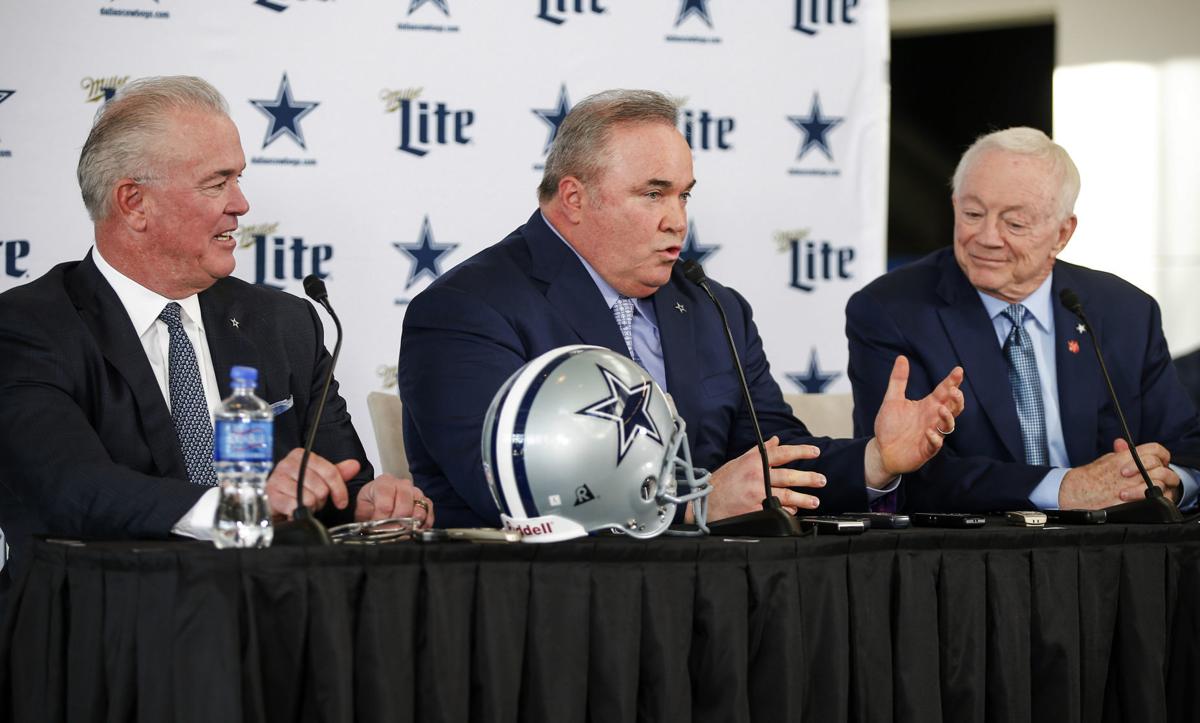 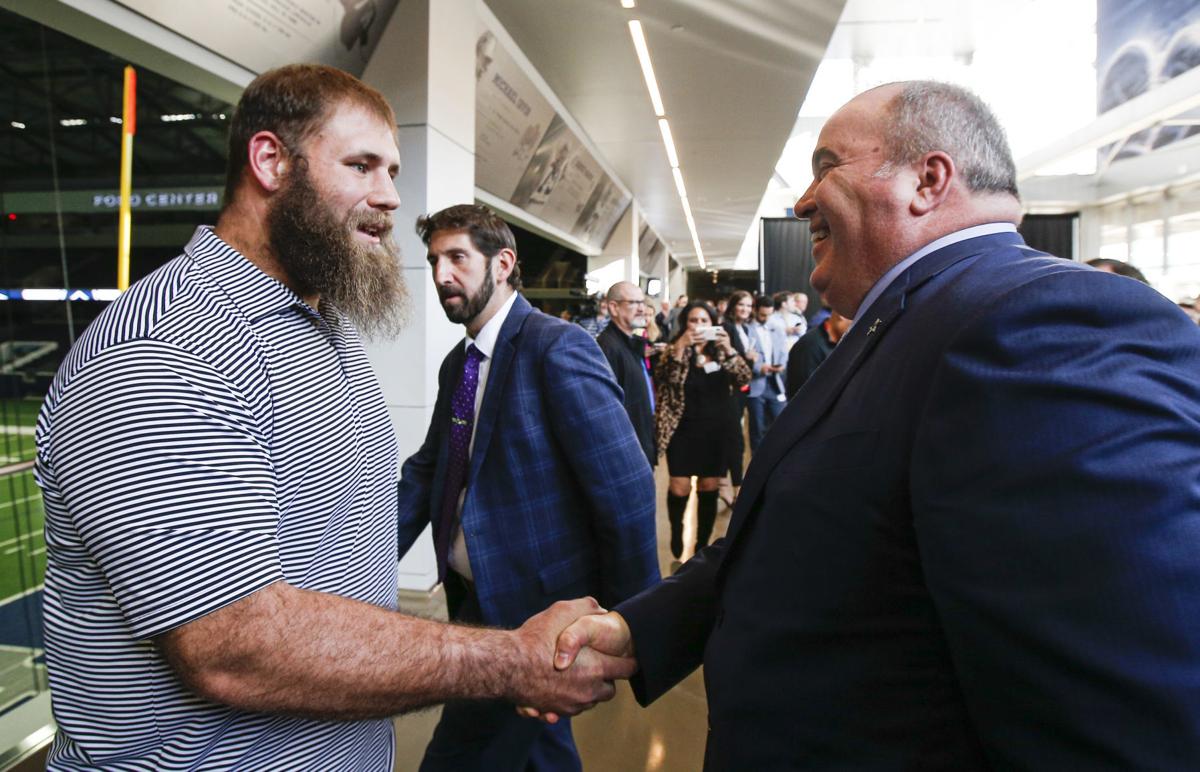 FRISCO, Texas — Mike McCarthy used to drive by the statues every day when arriving for work at Lambeau Field, so there never was much need to tell him what he was getting into as coach of the Dallas Cowboys.

Nearly 10 years after winning a Super Bowl with one iconic franchise in Green Bay, McCarthy is taking over another and knows that's where the conversation starts with the Cowboys, regardless of their nearly 25-year absence on football's biggest stage.

"You look at the great coaches that have been here," McCarthy said during his introductory news conference Wednesday. "The Super Bowl champions. All the Hall of Fame players. You look at the great quarterback play here. There's a lot of similarities that I feel that I can use in this particular situation."

Flanked by owner Jerry Jones and his son, executive vice president Stephen Jones, McCarthy addressed a large crowd that included a handful of players and dozens of staff members in the atrium of the indoor football stadium that's also one of the team's practice fields.

McCarthy won his championship nine years ago at the home of the Cowboys, which has a statue of Hall of Fame coach Tom Landry near the main entrance.

McCarthy coached in the shadow of Curly Lambeau and Vince Lombardi with the Packers, reaching the playoffs nine times in his first 11 years before getting fired during what ended up being a second straight losing season.

Now the 56-year-old McCarthy, after a year out of football, is taking over for Jason Garrett, second to Landry's 29 years in tenure for Dallas coaches at 9½ seasons, but without anything remotely approaching Landry's postseason pedigree.

"I am honored to be the steward of this iconic franchise," McCarthy said. "I told Jerry this in the interview, that I will take care of that honor and privilege and that responsibility. Because I understand it. And I know what it takes."

Dallas missed the playoffs at 8-8 with high expectations in a make-or-break season for Garrett, whose departure with an expiring contract was announced after McCarthy interviewed. The Cowboys missed the playoffs six times in his nine seasons, winning two wild-card games.

Green Bay was the only other head coaching job McCarthy had. He led the Packers to at least 10 wins in eight of his first 11 seasons, including four trips to the NFC championship game.

Dallas hasn't been that far in the playoffs since the last of the franchise's five Super Bowl titles to finish the 1995 season.

"One of our primary goals in selecting the head coach of the Dallas Cowboys was to focus on a proven team builder and winner," Jerry Jones said. "In Mike McCarthy we found a coach who not only checked those boxes, but also has the experience of taking an NFL team to the biggest stage, a Super Bowl, and completing the job."

McCarthy went 125-77-2 in the regular season with the Packers and 10-8 in the playoffs. The Cowboys have just three playoff wins since their most recent championship.

With two-time MVP Aaron Rodgers at quarterback, the Packers made eight straight playoff appearances from 2009-16, a stretch that included two divisional-round victories over the Garrett-led Cowboys.

McCarthy focused mostly on his family in his year away from football, but spent plenty of time analyzing film and thinking about how he'd like to structure parts of a football operation. There was never much doubt he would coach again.

"I just think it just really gives you a chance to evaluate where you are and what you have left," McCarthy said. "And frankly I believe this is what I was put on this earth to do professionally. I'm a football coach. And I'm working at the most iconic franchise in all of professional sports. It doesn't get any better than that."

Just as McCarthy had with Rodgers, the Cowboys believe they have their franchise quarterback in Dak Prescott, the 2016 NFL Offensive Rookie of the Year who ran the league's No. 1 offense in his fourth season.

Prescott is a free agent-to-be after finishing his rookie deal as a fourth-round pick. There's no question where he will be in 2020, only whether it's on the franchise tag or a long-term deal that's been in the works for a year.

"I've always been impressed with him," said McCarthy, whose Packers beat Prescott as a rookie in the divisional round. "You're going to able to run the whole offense and then some. I think he has an incredible foundation to build off of."

McCarthy also made it clear that two-time rushing champion Ezekiel Elliott will be an important part of the offense. Elliott signed a $90 million, six-year extension days before the 2019 season started.

For all of McCarthy's success in Green Bay, the last two years were rough, capped by his firing the same day of an embarrassing home loss to Arizona. There was always talk of a tenuous relationship with Rodgers.

Now McCarthy starts over with two young cornerstones on offense and a defense that left more questions than answers in a season that fell far short of expectations.

"We didn't win enough games at the end of my career," he said. "I think you go back and you be honest and go through the why. Honesty's the only way you really give yourself a chance to grow and this past year gave me that opportunity. I feel like I took very good advantage of it."

Talk of the ending in Green Bay drew an unsolicited response from Jerry Jones.

Jones picked a coach who's been there with another of the NFL's biggest brands.

We are sharing Wisconsin State Journal writers' favorite work from 2019. From Packers reporter Jason Wilde: When I started on the Packers beat for the State Journal in 1996 — the first of 13 consecutive seasons I covered them for the paper — I had three really great mentors in Green Bay: State Journal Packers beat writer Kent Youngblood, State Journal columnist Tom Oates, and Tom Mulhern, who was at the Appleton Post-Crescent at the time but would later spend more than two decades at the State Journal covering the Packers and University of Wisconsin football. Among the many lessons I learned from them at that young age of 24 was what an incredible responsibility we bore to chronicle the journey of each team we covered each season. Every journey was different, but covering it was no more or less important based on how the season went or how far the journey took that team. In ’96, it took the Packers to New Orleans and the Super Bowl XXXI title, the historic franchise’s first championship since the 1960s glory days.

Now in Year 4 of my second tour of duty covering the Packers for the State Journal thanks to sports editor Greg Sprout, the 2019 season has been — and continues to be, as the Packers ready themselves for an NFC Divisional playoff game at Lambeau Field on Jan. 12 — a fascinating journey. And it has nothing to do with the franchise celebrating its 100th birthday in August. (Although that was quite the accomplishment. And you should’ve seen the cake.)

From the team hiring Matt LaFleur as its new head coach, to the arrival of flamboyant and dominant pass rusher Za’Darius Smith (and his brother-from-another-mother fellow outside linebacker Preston Smith) in free agency, to 36-year-old Aaron Rodgers’ and the 40-year-old LaFleur’s work-in-progress offense and relationship, it’s all somehow gotten the Packers to a 13-3 record and into the postseason — something Super Bowl-winning head coaches Vince Lombardi, Mike Holmgren and Mike McCarthy couldn’t do in their first seasons.

For my five selections, I tried to pick stories that reflected key mileposts in the 2019 Packers’ journey.

For the past three decades, Brett Favre and Aaron Rodgers have done their best to live up to Bart Starr’s ideals. And while that’s not always the easiest thing to do, their success has given the Packers something no other NFL team can claim in the past century: three Hall of Fame-level quarterbacks.

The Dallas Cowboys are hiring former Packers head coach Mike McCarthy as the ninth head coach in Cowboys history, according to reports.

The Cowboys and Redskins went with experience, the Giants and Panthers with newcomers, and the Browns still are searching.

Ex-Packers coach Mike McCarthy focused on next NFL head-coaching stop — and being ‘better, not bitter’

“As I’ve said many times over the last eight or nine months, this year has been a gift. And I’m very thankful for it,” McCarthy said.

49ers' Richard Sherman on lack of minority hires in NFL: 'It's not changing'

Get the latest analysis, injury reports and highlights as the Green Bay Packers take on the Seattle Seahawks in an NFC divisional playoff matchup Sunday night at Lambeau Field.

Mike McCarthy's legacy in northeast Wisconsin extended off the field with various charitable contributions and engagement with community members.