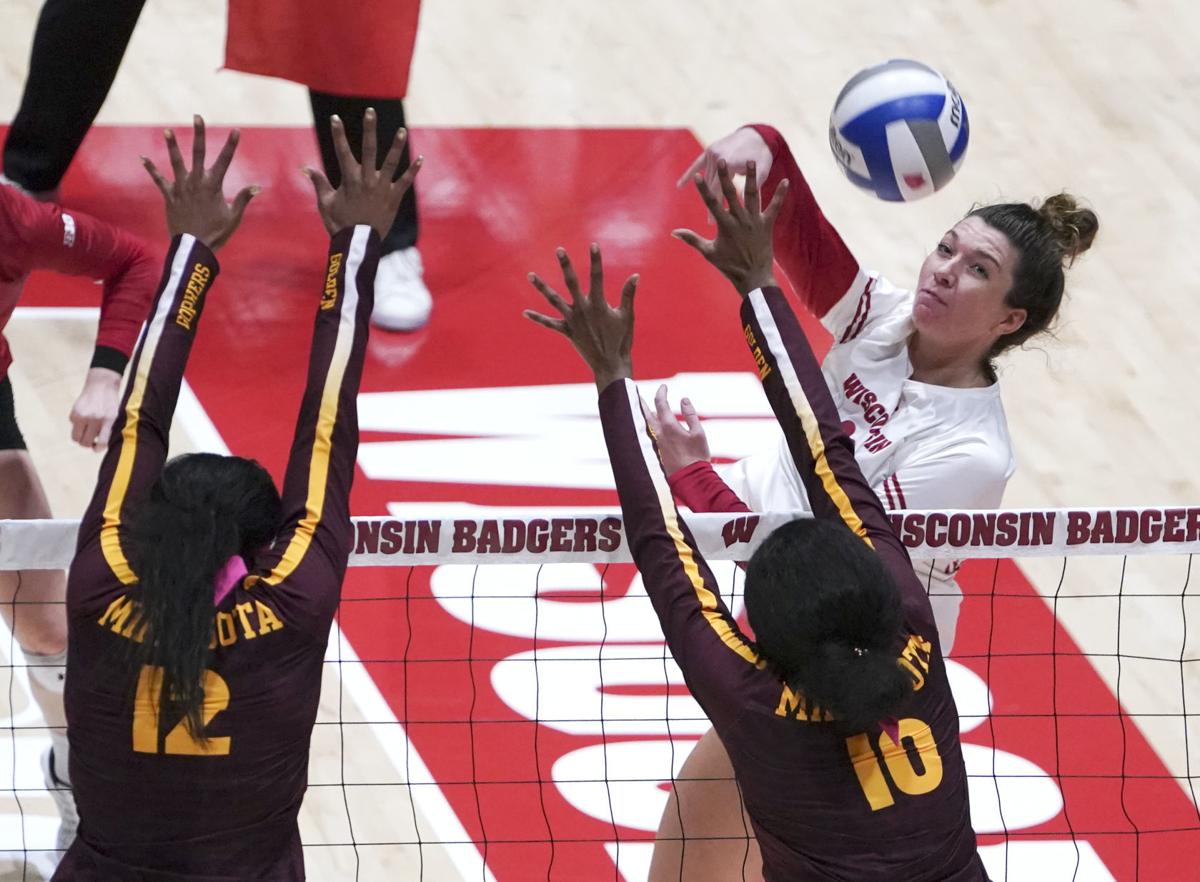 UW's Molly Haggerty attacks the block of Minnesota's Stephanie Samedy (10) and Taylor Morgan during the third set Sunday at the UW Field House. The junior finished with 12 kills. 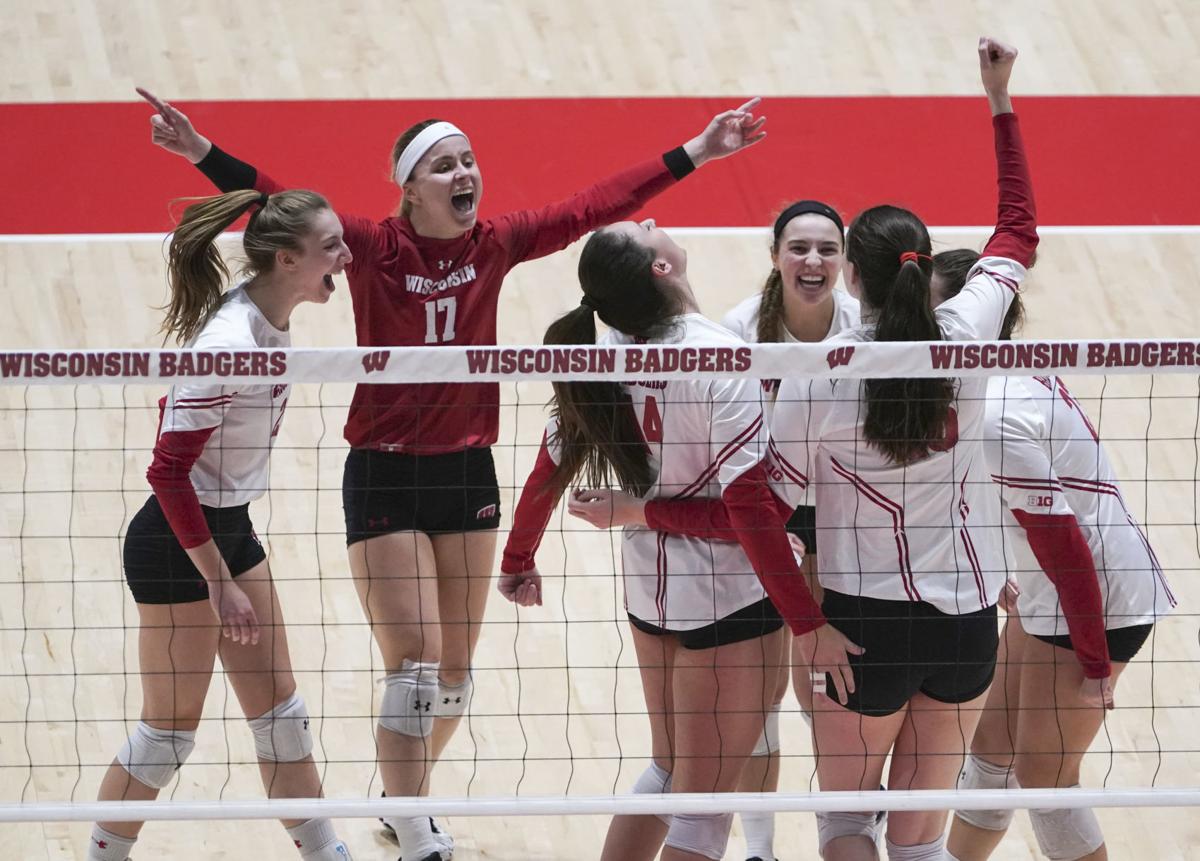 The Badgers celebrate a point in the third set as they close in on the program's first victory against the Golden Gophers since 2014.

A warning to the rest of the Big Ten Conference: The University of Wisconsin volleyball team insists it is nowhere near reaching its peak.

But even as they momentarily celebrated their first Border Battle win in five years, coach Kelly Sheffield emphasized that the Badgers still need to improve.

“After the game the first thing Kelly said is we’ve still got to get better,” junior setter Sydney Hilley said. “That’s our goal every day when we come in. It doesn’t matter if we win or lose, every day we’re working our butts off to get 1% better.”

The Badgers (10-4, 6-0 Big Ten) have improved by leaps and bounds since the start of the conference season, as they’ve recorded victories over the three teams perceived to be their biggest rivals — Penn State, Nebraska and Minnesota.

While going undefeated against a gauntlet that also included another ranked team in Purdue is a significant achievement, and gives them sole possession of first place, it’s not their ultimate goal.

“The team’s got to continue to evolve,” Sheffield said. “People have film on you and if you’re still doing the same thing in November and December that you’re doing in October, then what in the world are they paying me for?

“There wasn’t anything in our goals that said, man, whatever we do we’ve got to win on October 13th. It’s not that. We want to be a team that continues to evolve and see how good we can be.”

For a while it looked as if the Badgers again would have their hands full with the Gophers (11-3, 5-1), who had won the past eight meetings. Aided by five UW attack errors, Minnesota jumped to an early lead in the first set.

But things flipped when Lauren Barnes, who transferred to UW after two seasons at Minnesota, came in to serve with the Badgers down 8-6. She recorded aces on two of her first three serves to fuel a 7-0 run that put UW ahead 12-8. She finished off the set with four more service points in a 5-0 run.

“She kind of set the tone,” Hilley said of Barnes. “She had a great serving run and I think we all got confidence from that. It was like, all right, let’s do this. From there we kept getting better and better as we found our rhythm.”

The Badgers never lost that rhythm as they trailed just twice the rest of the match, the latest coming at 9-8 in the third set.

Junior Dana Rettke, who has enjoyed some of her biggest matches against the Gophers — she averaged 20.8 kills and hit .521 in her first four contests — again led the way with 16 kills, hitting .500.

While Rettke’s career high of 30 kills came against the Gophers in her freshman year, this match understandably stood above the others in her mind.

“I always take a team win over anything ever,” Rettke said

As for the Gophers’ dominance in recent years? “I think it makes us more determined,” she said.

Rettke had plenty of offensive help, as junior Molly Haggerty had 12 kills and sophomore Danielle Hart added nine, with five of them coming in the third set and three of those in a 6-1 run that stretched a 16-13 lead to 22-14.

“She’s working a lot on her game, before practice, after practice,” Rettke said of Hart, her fellow middle blocker. “She’s just really, really determined to help this team out any way she can. She’s doing absolutely phenomenal. I was screaming in her ear today because I was so happy for her. She’s doing really awesome.”

The Badgers also showed some stingy defense, holding the Gophers to a season-low .160 hitting percentage. All-American opposite Stephanie Samedy finished with a season-low five kills.

That defense, combined with superior serving, proved too much for Minnesota.

“I thought our serve-pass game was really good,” Sheffield said. “I thought we put a lot of pressure on behind the service line and I thought our passers were really good the entire match, very consistent.

“Who are we kidding? The locker room feels good after a win. But we’re getting better and that’s the thing that’s most important to me right now.”

The Wisconsin Badgers defeated both Northwestern University and the University of Minnesota this past week. They are now 6-0 in the Big Ten an…

Badgers move up a spot to No. 6 in national coaches poll

The Badgers (10-4) have won six straight matches, including a sweep of then-No. 6 Minnesota on Sunday.

Nicole Shanahan fills in for the injured Dana Rettke at middle blocker and provides a spark as UW swept Northwestern 25-22, 25-21, 25-17 before a full house at the UW Field House.

UW's Molly Haggerty attacks the block of Minnesota's Stephanie Samedy (10) and Taylor Morgan during the third set Sunday at the UW Field House. The junior finished with 12 kills.

The Badgers celebrate a point in the third set as they close in on the program's first victory against the Golden Gophers since 2014.