Chayla Edwards has discovered more about herself as a hockey player for the University of Wisconsin in the last three seasons.

Much of what she has unlocked in the way she plays has been because of an increasing level of comfort and composure, she said.

The changes haven't stopped when she has taken off her skates, and her personal growth has come with a new willingness to express herself.

Edwards credits a partnership she entered after the NCAA allowed athletes to profit from their name, image and likeness last summer with helping her find that voice.

Milewski on Hockey: A rare double sweep for Wisconsin alters the outlook for both teams

"The main message I've been trying to push is authenticity," she said. "Being yourself, especially when you're a minority in this situation for so long and so many years, because that's something I struggled with. So I want to show people being authentic, that's just the best version of yourself. It doesn't matter what people think about that."

Edwards, a junior defender for the Badgers, partnered with Degree deodorant as part of a team of college athletes who have overcome adversity in their careers.

She said she has felt alienated as a Black woman in hockey, a sport whose USA Hockey membership was less than 8% percent people of color in 2019 and that continues experiencing episodes of racism. Finding her identity in the game or outside of it hadn't been easy, nor had finding the words to talk about it.

"They gave me a chance to share my story just about being a hockey player of color," Edwards said. "So it's been very cool because I'm getting more comfortable using my platform and speaking out about things that I care about, and in a very authentic way. That's what they encourage. So I was very grateful for that opportunity."

On the ice, Edwards' growth hasn't been a direct path. There have been unsuccessful shifts and forgettable games.

The way she has approached them, however, is part of the reason she said she has been able to keep pushing forward. When a bad moment happens, it's time to move on and work on the next opportunity.

That's also an important reminder for the Badgers heading into a series at St. Cloud State on Friday and Saturday and a rescheduled game at St. Thomas on Monday. UW fell out of the top spot in the rankings for the first time this season after losing twice at Minnesota last week.

"You reflect on the games and the big thing is to push forward and try to improve," Badgers coach Mark Johnson said. "I'm sure we're going to see (Minnesota) again at some point as we go through the next couple of months. There was a lot of things that we did well in both games; unfortunately we just didn't win either one of them."

Edwards, a Cleveland native whose sister, Laila, has signed to play for the Badgers next season, was plus-23 through her first two seasons at UW. She's plus-24 in 24 games this season and has five assists over her last six contests.

She said she's more confident with the puck and trusts herself more lately. Maturity in her game is behind that development.

Just as critically, she's growing as a person, too.

"I don't think I ever really knew who I was so I couldn't go and then find her," Edwards said. "So I had to just sit with myself, figure out what I like apart from hockey — what my true passions are. Because hockey is great but I can't do that forever."

The answers are evolving. She wants to travel beyond just hockey road trips. She recently found out she loves dog sitting after getting the opportunity to do it.

"I care for people a lot," Edwards said. "So I want to help people when I get older. And I love just literature, books and just all kinds of things — music, yoga, mindfulness. So it's really cool to discover that and have fun with that too."

Read stories on the Badgers women's hockey games from the 2021-22 season.

The Huskies thought they frustrated the Badgers' offense in a victory that kept UW from its eighth straight Frozen Four.

The Badgers blocked 25 shots and got 30 saves from Kennedy Blair to advance to a regional final against Northeastern.

Liz Schepers and Gabby Rosenthal scored second-period goals for the Buckeyes after Sophie Shirley put the Badgers in front.

O'Brien scored the first of her two goals 66 seconds into the game as the Badgers women's hockey team completed a sweep of Bemidji State.

The Wisconsin women's hockey team had to rally to start the Western Collegiate Hockey Association playoffs in a positive way.

Goalie Kennedy Blair missed the game and forward Sarah Wozniewicz left early as injuries continued to pile up for the Badgers.

The Badgers looked undisciplined on the defensive side of the ice at times and fell into third place in the WCHA with one game to play.

Drake, Daryl Watts and Grace Bowlby all had multiple points in their last regular-season home game with the Badgers women's hockey team.

Watts and linemate Casey O'Brien both scored twice but the Badgers had to climb out of an early hole again.

Watts scored three times as the Badgers salvaged a split of a series against Minnesota Duluth.

Jojo Chobak made 45 saves in cranking up the level of scoring frustration a little more for UW.

The Badgers took over first place in the Western Collegiate Hockey Association, going percentage points ahead of Minnesota and Ohio State.

The Badgers moved into a tie with Ohio State for second place in the WCHA with a victory at St. Cloud State.

Emma Polusny makes 54 saves for St. Cloud State, which halts a 29-game losing streak to the Badgers with the tie.

The Gophers took 11 of 12 points in the four-game regular-season series against the Badgers.

The Gophers secured the advantage in the regular-season series between the border rivals for the first time since the 2014-15 season.

The top-ranked Badgers went 4-for-4 in killing penalties, including one in overtime against the fourth-ranked Bobcats.

O'Brien scored a tiebreaking, short-handed goal in the third period for the top-ranked Badgers against the fourth-ranked Bobcats.

The Badgers hadn't scored more than two goals in a first period this season but scored four times to take control of the series opener against the Beavers.

Close but not enough was the theme for the Badgers during a series in which they never led.

Momentum disappears in a flash as No. 1 Wisconsin's unbeaten streak ends against Minnesota

The Badgers lost for the first time this season and had a 22-game unbeaten streak that dated to last season extinguished.

Brette Pettet, Makenna Webster, Sophie Shirley and Casey O'Brien all were credited with a goal and an assist for the top-ranked Badgers.

Maddi Wheeler scored twice and recorded her first four-point game for the Badgers in their first game against the Tommies.

Held scoreless on 56 shots a day earlier, the Badgers broke out with eight goals on Sunday.

Hannah Hogenson made 56 saves for Bemidji State, the most ever by a Badgers women's hockey opponent in a shutout. But Wisconsin managed to pick up the extra point in the shootout.

The Badgers women's hockey team earns a series sweep, thanks in part to Webster scoring three times in a 6:26 stretch of the third period.

UW outshot the Mavericks 18-3 in the third period to assume control and then guide the game to the finish.

Nicole LaMantia finds room for first overtime goal as No. 1 Badgers down No. 2 Ohio State

LaMantia recorded her first two-goal performance in 108 career games for the Badgers.

Casey O'Brien's redirection late in the second period gave UW the lead for good in a 3-1 victory against No. 2 Ohio State at LaBahn Arena.

Watts scored twice and assisted on three other goals as UW completed a sweep of St. Cloud State with a 6-1 victory at LaBahn Arena.

Fifteen of 18 Wisconsin skaters recorded at least a point as the Badgers defeated the Lions for the 19th straight time.

Sophomores Maddi Wheeler and Casey O'Brien both scored twice for the top-ranked Badgers.

No. 3 Badgers at St. Cloud State

The Gophers took 11 of 12 points in the four-game regular-season series against the Badgers.

Emma Polusny makes 54 saves for St. Cloud State, which halts a 29-game losing streak to the Badgers with the tie.

The Badgers moved into a tie with Ohio State for second place in the WCHA with a victory at St. Cloud State.

The Badgers play at St. Thomas on Monday before hosting No. 5 Minnesota Duluth on Friday and Saturday. 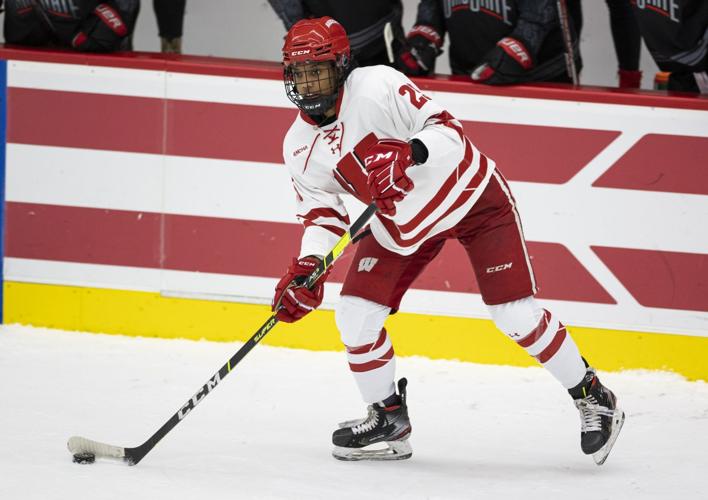 Badgers defender Chayla Edwards is plus-24 in 24 games this season. 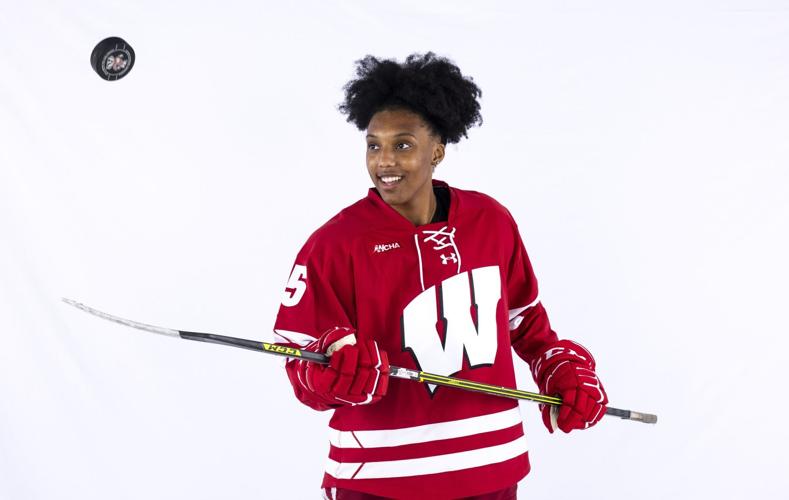 "I want to show people being authentic, that's just the best version of yourself," Chayla Edwards said. "It doesn't matter what people think about that." 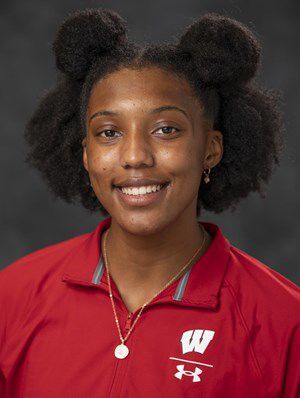