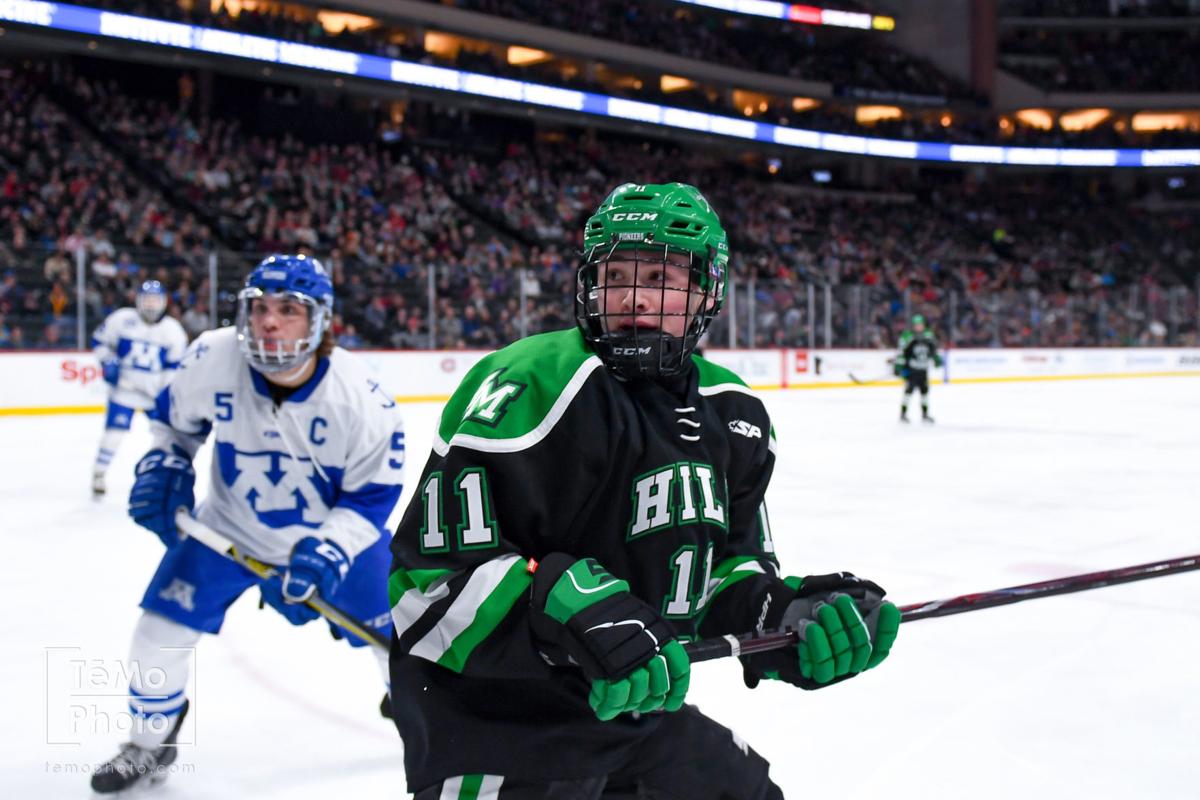 Nick Pierre, a 14-year-old who has given Badgers coaches an oral commitment, was called up to the Hill-Murray varsity team as an eighth-grader and played in the Minnesota state tournament this past winter. 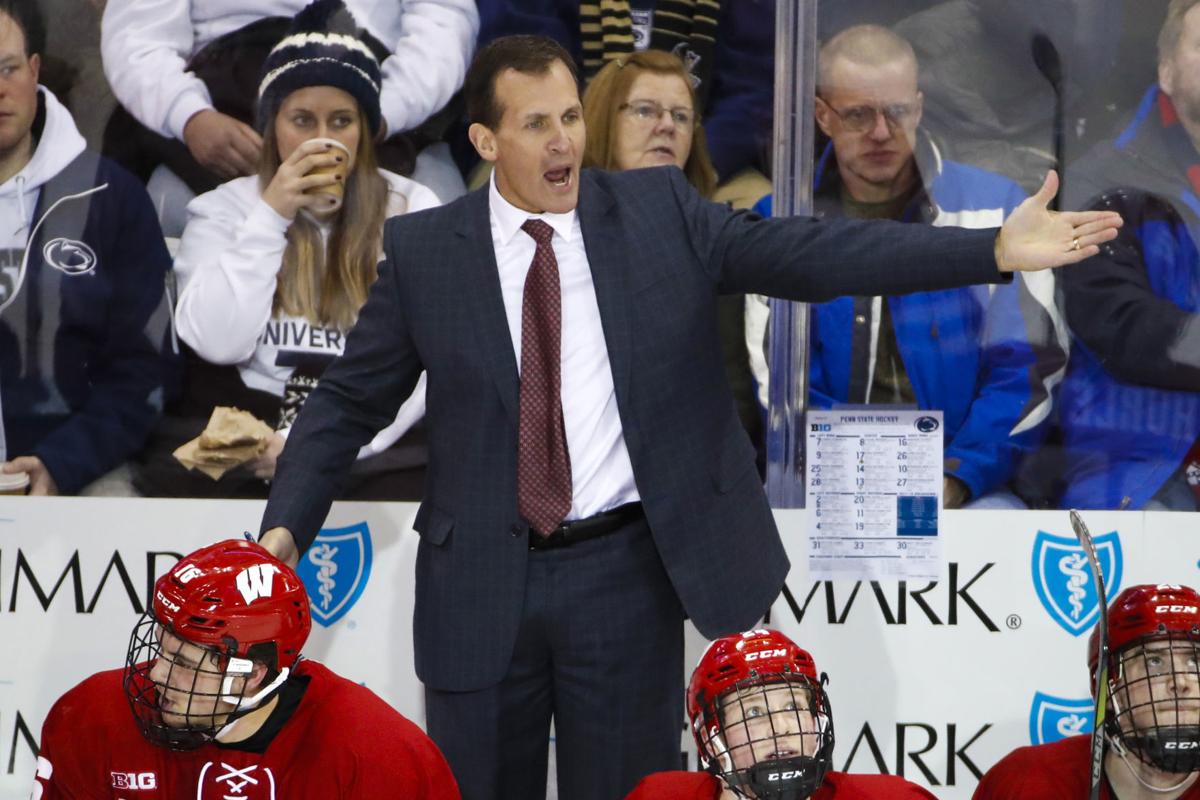 Wisconsin men's hockey head coach Tony Granato stands behind his bench during a game against Penn State in State College, Pa., on Jan. 5.

Nearly two months ago, University of Wisconsin men’s hockey coaches had to beat the clock to be able to get their latest committed recruit onto campus to see them.

Minnesota forward Nick Pierre was scheduled to make an unofficial visit with the Badgers on May 12 until pending NCAA legislation played a role in both sides moving that ahead to April 22.

On April 25, three days after Pierre and his parents were at the Kohl Center, the NCAA Division I Council finalized an immediate rule change to prevent team officials from being involved in a campus visit until September of the player’s junior year in high school.

At the time of his visit, Pierre was in eighth grade and more than 28 months away from reaching the point where he could meet with Badgers coach Tony Granato on campus under the rules that were about to take effect.

The movement in meeting dates offers a glimpse into how UW coaches adjusted to new limitations. Pierre’s oral commitment to the Badgers, announced last Wednesday, was an indication that delaying early college decisions won’t be an easy task.

Pierre became the first player born in 2004 to commit to the Badgers but he’s the sixth 14-year-old to give a pledge since Granato’s tenure at UW began in 2016.

Pierre’s parents, Scott and Courtney, conceded that their son’s decision to commit to the Badgers came early but said it was anything but off the cuff.

“He covered his bases and made sure that he surrounded himself with good people that gave him their honest opinions,” Courtney Pierre said.

In describing his reasons for committing to the Badgers, Nick Pierre cited the team’s culture and the coaching staff’s set of values. He said they reminded him of what he has found at Hill-Murray School in the St. Paul suburb of Maplewood, Minnesota.

A speedy player with a heavy shot, Pierre is already familiar with an accelerated timeline.

He was called up to the Hill-Murray varsity team as an eighth-grader last season. As a winger getting top-line opportunities, he scored eight goals in eight regular-season games before helping the Pioneers to the state tournament.

“He’s a very mature young man. He’s very focused, very driven,” longtime Hill-Murray coach Bill Lechner said. “Wisconsin got a great find. Obviously, it’s a risk, being a puppy like that. ...Some kids, it would go to their head or they would quit working or think it’s just going to happen because now they’re the greatest. Nick’s kind of the opposite of that.”

Before he joined the Badgers staff as an associate head coach last summer, Mark Strobel coached Pierre in AAA hockey summer leagues. Strobel is a former Hill-Murray player whose nephew, Charlie, now plays for the Pioneers.

Scott Pierre said his son made his own decision on committing to UW, but having Strobel and Granato at the school was comforting.

“It’s such a young age in making that early commitment, but being a part of a family like that, that everybody’s got everybody’s back and they will do anything for you, that’s what I want to surround my kid (with),” Scott Pierre said. “It’s more than just hockey when you really look at it. It’s about building his character, building who he is and making him a better person.”

There are efforts underway to carve out exceptions for men’s and women’s hockey to the reworked NCAA rule on unofficial visits.

Still, those involved with the push for relief for men’s hockey have alleviating early recruiting as one of their broad goals.

Supporters of the new limitations passed in April argue that they will slow the recruiting process and put academics, not college decisions, on the front burner for the first years of high school.

Schools also would have a better sense of a recruit’s academic situation when he or she is first allowed to visit their training facilities.

The same date was fixed for the first permissible recruiting conversation between a coach and a prospective student-athlete at an institutional camp or clinic.

In college hockey, the unofficial visits change likely will have varying impacts on programs. Some whose recruiting patterns tip toward older commitments won’t have to alter practices as much as schools such as UW.

Nineteen of 36 current Badgers recruits made their oral commitment when they were age 14 or 15.

The Canadian-based leagues, which can draft players at age 15 and 16, are considered professional by the NCAA. So once players compete there, they lose American college eligibility.

“The presence of Canadian junior hockey really makes it desirable for us to be able to deal with prospective student-athletes a little bit earlier,” Bertagna said.

“We don’t necessarily have any contention with the concept of delaying this process and not having the activity happen with eighth-graders and ninth-graders and so forth.

“But the cookie-cutter approach that the NCAA has taken with Sept. 1 of the junior year has been problematic to both men and women.”

Granato, who is prohibited by NCAA rules to discuss recruits who haven’t signed the National Letter of Intent that formalizes the commitment before enrollment, said there now will be less information available to players if they choose to commit before their junior year.

“You’re putting the kid in a bad position to have to make that decision,” Granato said.

After working for the past two years on recruiting practices, an ad-hoc committee of Division I men’s college hockey commissioners, school athletics administrators and head coaches has recently gained a temporary adjustment to the new recruiting calendar for the sport.

The committee has focused on promoting understanding of the nonbinding nature of oral commitments and hockey-specific complexities of the National Letter of Intent with delayed enrollment.

Under current NCAA rules, coaches aren’t allowed to contact prospective recruits until Jan. 1 of their sophomore year, but there is no prohibition on contact initiated by the player.

The committee developed a draft recruiting model that was shared with the NCAA’s Student-Athlete Experience Committee, the body that helped craft this year’s overall recruiting legislative changes. Fenton declined to provide details of the still-in-discussion model beyond stressing that the main point was to alleviate early recruiting.

When the overall changes to unofficial visits were passed in April by the NCAA Division I Council, however, men’s hockey wasn’t afforded any exemption despite the sport’s challenges in competing with major junior teams for top talent.

Fenton worked with the Big Ten Conference to apply to the NCAA’s Committee on Legislative Relief for a waiver that would allow men’s hockey coaches to host unofficial visits and have recruiting conversations at camps starting Jan. 1 of the prospect’s sophomore year.

The NCAA granted that request on May 31, but only through Sept. 1 of this year. Fenton said the college hockey committee is continuing to work on a long-term solution.

As of now, Pierre’s projected enrollment at UW is in 2022. Given the unofficial nature of oral commitments, there’s no guarantee.

The Pierre family was aware of the NCAA rule change because of the moving date for Nick’s unofficial visit. Things happened faster than they originally thought they would, but they’re convinced that the outcome didn’t change.

“Everyone has a different path. Everyone has different timing,” Courtney Pierre said. “I think it’s a very personal choice. And it ultimately ends up being Nick’s choice, and we’re supporting him.

“If we didn’t feel he was ready to make that commitment — we thought about it long and hard and had a lot of conversations with him about everything. But this is a perfect fit for Nick right now.”

Pierre said he understands that there’s a desire among many to stop the kinds of early commitments that he made. He had his own reason for the decision: He said he’ll be more motivated over the next four years because of what’s ahead of him.

“I get what they’re saying,” he said of the intent behind the rules change. “They don’t want too many at an early age. But I feel like if you commit at an early age, they (coaches) will help guide you to where they want you to be.”

Nick Pierre, a forward who'll enter ninth grade at Hill-Murray School in the Twin Cities in the fall, announced Wednesday that he had committed to the Badgers. The earliest he'll join UW is 2022.

Caden Brown's dad and brother played in major juniors, but the St. Louis-area center has chosen the college route by giving an oral commitment to the Badgers.

A movement toward standardizing the overtime format for NCAA hockey may have stalled, the rules committee chair said.

JD Greenway is leaving the Badgers to play the 2018-19 season with the United States Hockey League's Dubuque Fighting Saints, who completed a trade for his rights on Thursday.

In the final six weeks of the 2018-19 regular season, the University of Wisconsin men's hockey team will determine its place in the final Big …

The Badgers announced Thursday that senior defenseman Peter Tischke will take the captain's role for his senior season, with senior forward Seamus Malone as alternate.

Nick Pierre, a 14-year-old who has given Badgers coaches an oral commitment, was called up to the Hill-Murray varsity team as an eighth-grader and played in the Minnesota state tournament this past winter.

Wisconsin men's hockey head coach Tony Granato stands behind his bench during a game against Penn State in State College, Pa., on Jan. 5.