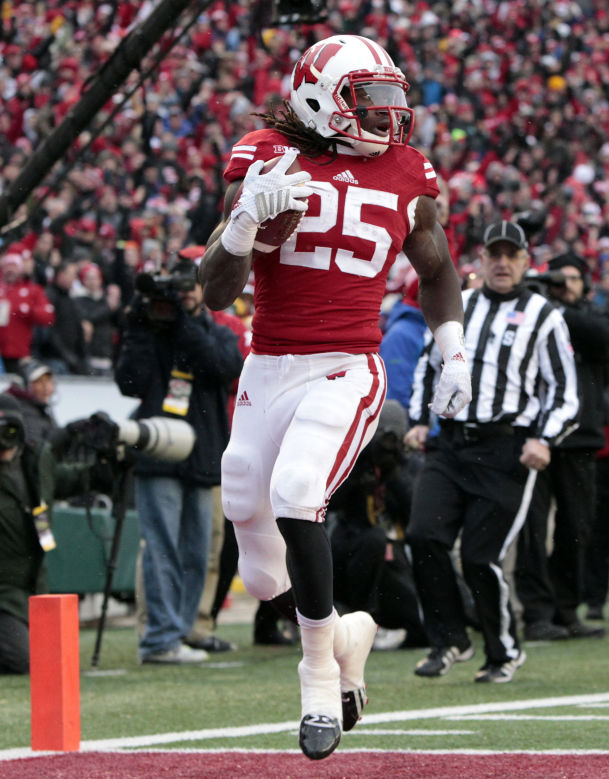 Wisconsin running back Melvin Gordon enters the end zone on a 62-yard touchdown run in the second quarter of the Badgers' 59-24 victory over Nebraska on Saturday at Camp Randall Stadium. 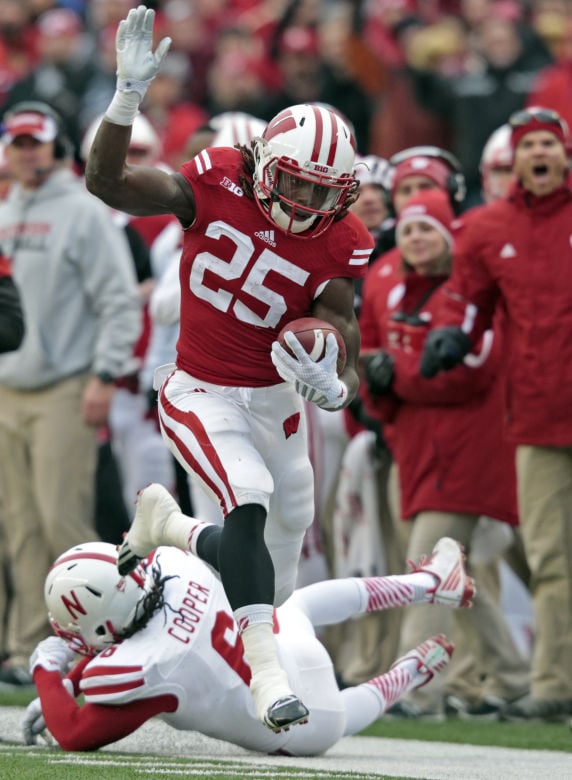 Wisconsin running back Melvin Gordon eludes Nebraska  safety Corey Cooper on a 42-yard first down run in the first quarter of the Badgers' 59-24 victory over Nebraska on Saturday at Camp Randall Stadium.

No matter, the effect was the same as it was 15 years earlier on the same field.

In 1999, it was Dayne breaking the NCAA career rushing record to all but sew up the Heisman Trophy and UW clinching a second consecutive Big Ten Conference title with a 41-3 victory over Iowa in the final regular-season game.

Saturday, Gordon broke the major college single-game rushing record with 408 yards to thrust himself into the upper echelon of Heisman contenders and 22nd-ranked UW gave second-year coach Gary Andersen his first signature win with a 59-24 rout of 11th-ranked Nebraska, one that put the Badgers in the driver’s seat in the Big Ten’s West Division.

That’s a lot to pack into one game. Or, in this case, two games.

“Obviously, that was such great history,” said tight end Sam Arneson, whose parents attended what came to be known as the Dayne Game in 1999. “But I think tonight has to rank up there with it.”

The difference, of course, is that this UW team still has unfinished business. The Badgers earned themselves a one-game lead in the division, but they have games remaining with Iowa and Minnesota. And Gordon’s performance, as remarkable as it was, still won’t make him the favorite for the Heisman, though he might have turned it into a two-man race between himself and Oregon quarterback Marcus Mariota.

Yet the timing makes Saturday’s game no less important. Gordon’s stunning ability to break off long run after long run, still another stifling performance by UW’s defense, the Badgers’ refusal to flinch after falling behind 17-3 just a few plays into the second quarter, and running off 56 consecutive points against a once-beaten Nebraska team turned it into one of the more memorable games in the long history of Camp Randall.

“It was like you were in a dream, the way the game was going and then the snow and being under the lights,” Arneson said. “We scored right before ‘Jump Around’ and we were all just looking at each other like, ‘This is something special.’ It was such a special game. One I’ll never forget.”

No one was more unforgettable than Gordon, who needed only 25 carries and three quarters to rush for those 408 yards and bury the Cornhuskers. Keep in mind that Nebraska’s defense hadn’t allowed another team to rush for more than 188 yards in a game this season. Gordon blew by that mark sometime in the second quarter.

His 26-yard touchdown run on the final play of the third quarter made it 52-17 and signaled his departure. Instead of a Heisman pose, however, Gordon simply turned toward the field and bowed.

“I was just running to win,” he said.

The junior tailback took UW along for the ride with his record-setting day, prompting Andersen to call him “the best of the best” and eliciting reams of praise from teammates. Still, the comeback Gordon fueled will stand the test of time as well.

In its first 22 games under Andersen, UW had beaten only one ranked team — No. 19 Northwestern last year. And even that was somewhat tainted because it was the second of seven straight losses for the Wildcats.

But there are no asterisks attached to Nebraska, which had lost only at Michigan State and had been performing extremely well on offense, defense and special teams. The Badgers outplayed the Cornhuskers in all three phases and probably a few more, too.

“We needed a big win to make a statement,” quarterback Tanner McEvoy said. “I think we did that today. It was a great overall team win. The defense played great. We tasted adversity and we came back to win it.”

The way UW stormed back to win was the most special — and encouraging — aspect of the game. The Badgers lost three potentially demoralizing fumbles, including two by Gordon, and had an 18-yard punt to literally hand Nebraska 17 points, but never veered from their game plan or lost their resolve.

“They stayed well-grounded and fought through it,” Andersen said. “It was an amazing day to watch.”

At least as amazing as that game 15 years ago when Dayne and the Badgers made history. Quarterback Joel Stave, like many of his teammates, was just starting grade school back then and his memories of that game are a bit vague.

“I remember the papers and everyone talking about Ron Dayne and how he just absolutely blew up,” Stave said. “But I think this game and the season that Melvin’s having is right up there with anything that any running back has realistically ever done. He’s having a special year.”

Because he is, the Badgers still have a chance to do the same. The junior runs for an astounding 408 yards and the Badgers score 56 consecutive points to obliterate the Cornhuskers.

When you consider the opponent and the circumstances, it could be seen as the most dominating one-game individual performance in FBS history.

Now the focus shifts to finishing strong against the two biggest rivals.

The title scenarios in the Big Ten’s West Division, with two conference games to play.

The UW legend says he's proud of the running back who knocked him out of the top spot of the school record book for single-game rushing yardage.

The junior runs for an astounding 408 yards and the Badgers score 56 consecutive points to obliterate the Cornhuskers.

Read the State Journal's coverage of Melvin Gordon's historic game in UW's rout of Nebraska in 2014.

The junior tailback credits the big boys up front for the holes he ran through en route to an NCAA single-game mark.

The senior recorded a sack, an interception and a fumble recovery in helping UW hold the Cornhuskers to 180 yards of total offense.

Jim Polzin of the Wisconsin State Journal joins Rob Hernandez of BadgerBeat.com to break down the Badgers' huge win over Nebraska in a Big Ten…

University of Wisconsin players, including tailback Melvin Gordon, celebrate a 59-24 victory over Nebraska with the Freedom Trophy and by sing…

Video: UW's Joel Stave says Melvin Gordon 'has done a tremendous job for himself ... & team, too'

Get ready for game day with our guide to getting into, out of and around Camp Randall Stadium.

Wisconsin running back Melvin Gordon enters the end zone on a 62-yard touchdown run in the second quarter of the Badgers' 59-24 victory over Nebraska on Saturday at Camp Randall Stadium.

Wisconsin running back Melvin Gordon eludes Nebraska  safety Corey Cooper on a 42-yard first down run in the first quarter of the Badgers' 59-24 victory over Nebraska on Saturday at Camp Randall Stadium.