Running back Stevie Scott III and Indiana had their way against Big Ten rival Michigan State, blanking the Spartans 24-0 on Saturday in East Lansing, Mich. Up next for the Hoosiers? No. 3 Ohio State. 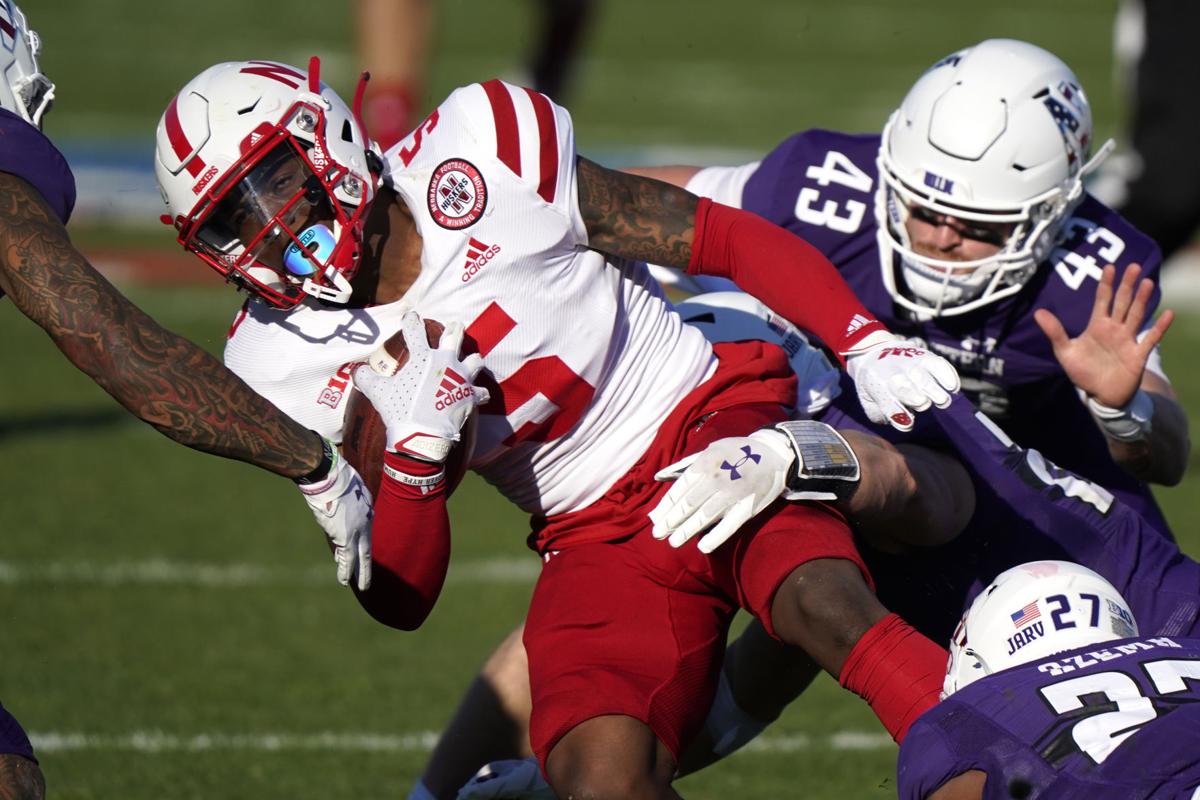 Indiana is officially a football school. Northwestern fans aren't thinking about basketball tipping off either. Wisconsin and Ohio State can wait too.

Illinois, Michigan - heck, even Rutgers - are counting down to hoops season.

Big Ten football teams are sorting themselves out, making a clearer picture of who is pushing for a spot in the championship game.

Nope, it's not just a slow start for Michigan and Penn State. They're truly having awful seasons.

Northwestern and Indiana? Four games in, we can safely say they're legit.

Here are five takeaways from Week 4 of the Big Ten season.

1. Northwestern finds a connection that clicks.

The Supreme Court has ACB. The Democrats have AOC.

Wide receiver Ramaud Chiaokhiao-Bowman showed his value in the Wildcats' 27-20 victory at Purdue as they remained unbeaten.

Quarterback Peyton Ramsey has been a game-changer for the Wildcats, steadily steering them to a 4-0 start. The graduate transfer from Indiana was spectacular against Purdue (2-1) with 212 yards on 23-of-36 passing, three touchdowns and one interception on a tipped pass.

Chiaokhiao-Bowman, a senior, has emerged as a favored target for Ramsey. He had a career night with eight catches for 86 yards and caught all three touchdown passes.

He had only one previous touchdown reception in his career — as a freshman. Before this season, he never had more than four catches in a game.

"Just absolutely awesome," Northwestern coach Pat Fitzgerald said. "You want to talk about a guy who is relentless in his work ethic. When Peyton made his decision to come here, he and RCB were in constant communication. That's what older leaders do. I'm just so proud of him. I'm not surprised though. His play tonight speaks for itself."

Their connection was especially important as Northwestern was unable to get its running game going on a cold, rainy night.

Fitzgerald mentioned Chiaokhiao-Bowman popping up after a hard hit across the middle.

"Gets right back up," he said. "Middle-of-November Big Ten football. That's what it's all about."

Chiaokhiao-Bowman said he had one thought after scoring his first touchdown.

Now No. 19 Northwestern (4-0) can put itself in the driver's seat for the Big Ten West title if it can win Saturday's showdown against No. 10 Wisconsin (2-0) at Ryan Field.

Prepare for plenty of pregame clips showing Fitzgerald in a Northwestern uniform. The Wildcats haven't gotten off to such a strong start since he was a linebacker in 1996.

2. Wisconsin-Michigan has 2 sides to the story.

Is Wisconsin this good? Or is Michigan this bad?

Michigan's paper-thin defense, error-prone offense and lifeless play overshadowed an efficient return to the field by the Badgers. The calls for Jim Harbaugh's job have never been louder as the Wolverines (1-3) crumble.

But let's not let that downplay what Wisconsin did.

After not playing for two weeks because of a COVID-19 outbreak, rust could have been expected. Instead, the Badgers mostly hummed along.

Even with key players still out because of COVID-19 protocols and injuries, Wisconsin's defense appeared at full force. The Badgers had an impressive goal-line stand, intercepted two passes and held Michigan to 47 rushing yards and 3 of 11 third-down conversions.

Quarterback Graham Mertz was nearly perfect in his starting debut against Illinois on Oct. 23, completing 20 of 21 passes with five touchdowns. He then tested positive for COVID-19.

The redshirt freshman wasn't as sharp against Michigan, completing only 12 of 22 passes for 127 yards and two touchdowns. Expect him to regain his step by the time he gets to Evanston.

Michigan, meanwhile, needs to completely regroup. The 38-point defeat was the largest home loss for the Wolverines since 1935, according to ESPN Stats & Information.

Harbaugh took responsibility for the disastrous start — Michigan's worst since 1967.

"Not a good place as a football team right now, and that falls on me," he told reporters after the game. "Got to get after really going back to basics in everything that we do and look at everything that we're doing. Everybody's got to do better. I'm at the front of the line in the accountability."

Luke McCaffrey looked like an answer for the struggling Cornhuskers.

The son of former NFL receiver Ed McCaffrey and brother of Panthers running back Christian McCaffrey could be another star in the family tree. The redshirt freshman earned his first start and led Nebraska (1-2) to its first victory, 30-23 against reeling Penn State (0-4).

McCaffrey especially impressed with his decision-making and ambidextrous throwing on a play late in the first half. As he was being pulled down on third-and-9, he avoided a sack by switching the ball to his left (non-throwing) hand and dumped it to Marvin Scott III, who picked up 14 yards to help set up a 25-yard field goal as the clock ran out.

McCaffrey led Nebraska to a 27-6 halftime lead before Penn State started to catch up thanks to more conservative play by the Cornhuskers. He completed 13 of 21 passes for 152 yards with a touchdown and an interception and added 67 yards and a touchdown on 13 carries.

He took over for Adrian Martinez, who had started all of his previous 23 games but was ineffective in the Cornhuskers' first two games this season.

Either one could have a strong day Saturday against Illinois.

Last season, Martinez completed 22 of 34 passes for 328 yards and three touchdowns in a 42-38 victory over Illinois and also gained 118 yards on eight carries.

4. For Indiana's Tom Allen, a day of celebration and concern.

Indiana coach Tom Allen is enjoying historic success on his way to a potential Big Ten Coach of the Year award.

Allen, who has become a favorite even among non-Hoosiers fans for his genuine sideline and locker-room emotions, had a tough personal moment during Saturday's game. His son, Thomas Allen, a redshirt junior and reserve linebacker, was carted off the field with a serious leg injury in the 24-0 victory against Michigan State.

He hugged and kissed his son before he was carted off. The extent of the injury wasn't known after the game.

Thomas Allen forced a fumble and recorded two tackles for No. 9 Indiana (4-0).

The victory at Michigan State was the first for the Hoosiers since 2016. Indiana has won five of its last six Big Ten road games, setting up the Hoosiers for one of the biggest games in program history when they head to No. 3 Ohio State on Saturday.

On Nov. 5, conference presidents and chancellors met and approved a rule that would allow a team with a canceled game that has had no COVID-19 issues to play another team in the same circumstance.

The Big Ten has had only one game canceled in a given weekend, so the rule couldn't have had an impact yet. The Ohio State-Maryland game scheduled for last Saturday was canceled because of active cases on the Terrapins.

Wisconsin had to cancel two games after a COVID-19 outbreak. If it misses another, it would not have enough games played to qualify for the conference championship game. But if the Badgers could pick up another game, it could be a lifesaver for their season.

A decision for two teams to play on a Saturday would have to be made by noon the previous Wednesday, according to ESPN.

The Big Ten painted itself into a corner — and drew loads of criticism — by initially delaying the season. The late start and no breaks in the schedule put the conference in a jam.

Led by its defense, the Badgers jumped out to a 28-0 lead over the Wolverines on Saturday, spurred by two turnovers the defense caused on the first two Michigan possessions, and rolled to a 49-11 win.

The Tigers' streak of top-five appearances reached 50 this week, the longest active streak in the country and the third-best in the history of the AP poll.

James Franklin's charisma, big-picture thinking and track record of success checks all the boxes for USC, even if maybe he has maxed out at Penn State.

Running back Stevie Scott III and Indiana had their way against Big Ten rival Michigan State, blanking the Spartans 24-0 on Saturday in East Lansing, Mich. Up next for the Hoosiers? No. 3 Ohio State.