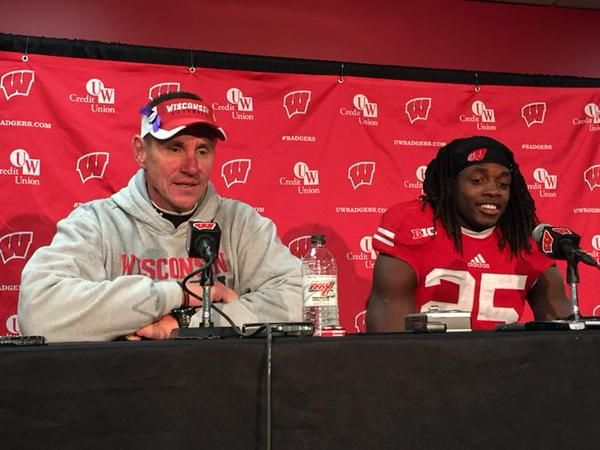 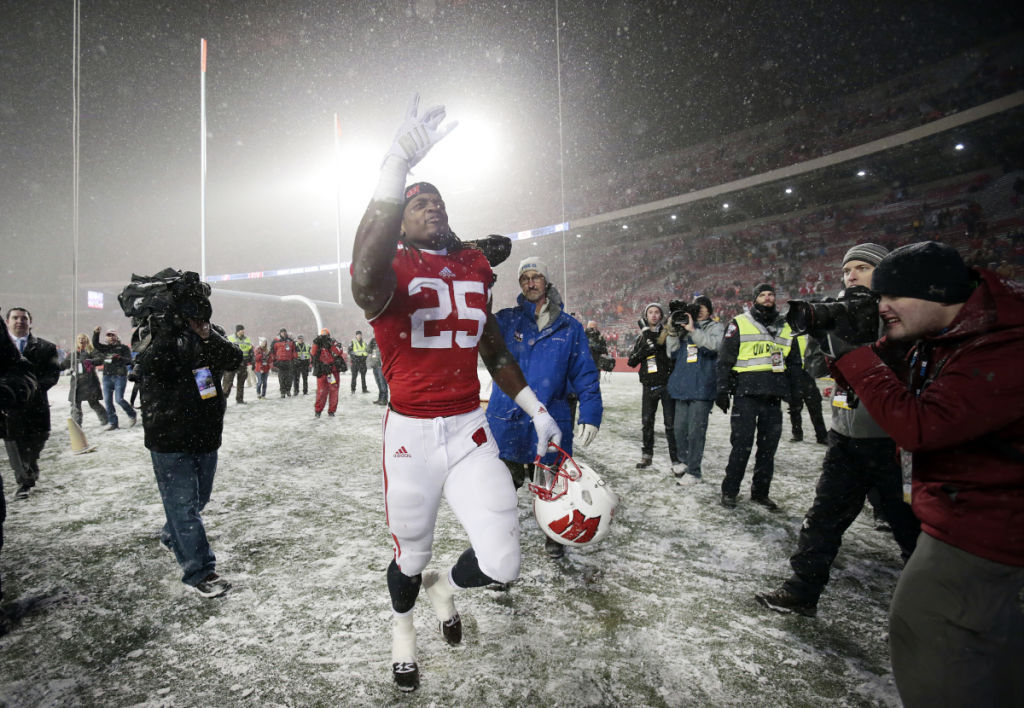 Wisconsin Badgers running back Melvin Gordon points to the student section while running off the field after his team's win over the Nebraska Cornhuskers on Saturday in a game at Camp Randall Stadium in Madison.

Melvin Gordon claims he was just running to win.

But for a stretch of time late in the University of Wisconsin football team’s 59-24 victory over Nebraska on Saturday, the result was only secondary.

The Camp Randall Stadium crowd yelled Gordon’s name in unison throughout the second half and chanted “Heisman” as he ran off the field afterward.

The Badgers’ three early fumbles, their early deficit, their 56 consecutive points, their now-unmatched advantage in the Big Ten Conference’s Western Division — none of it mattered as much as UW’s star running back.

Gordon broke an NCAA FBS record with 408 rushing yards and scored four touchdowns against the Cornhuskers, vaulting himself to the top of the Heisman Trophy race.

“You never know when a special day is going to come,” Gordon said. “I didn’t even know I was close to a record like that. … I was trying to hold back a little bit, but after they told me, I felt so good.”

It took Gordon only three quarters and 25 carries to go where no other major college football running back has ever ventured.

His final carry of the day came on the final play of the third quarter, when he broke a tackle near the line of scrimmage, cut inside a defender and high-stepped over another tackle attempt to score from 26 yards out.

It put him two yards ahead of the NCAA record set by TCU’s LaDainian Tomlinson against UTEP in 1999.

He eclipsed the Badgers’ single-game rushing record set by Ron Dayne, who ran for 339 yards against Hawaii in 1996, on a 68-yard burst in the third quarter. Three carries later, he broke the previous Big Ten record of 377, set by Indiana’s Anthony Thompson in 1989.

“To see a performance like that was amazing,” UW coach Gary Andersen said. “I think he’s the best of the best, and I think he proved it today when he was given the opportunity.

UW wide receiver Kenzel Doe lost a fumble on the game’s second play and Gordon lost two more in the first 21 minutes of the game as Nebraska (8-2, 4-2 Big Ten) built a 17-3 lead.

Two possessions after running for a 62-yard touchdown, Gordon broke off a 39-yard gain to set up Corey Clement for a 17-yard score that tied the game at 17 with 7:21 left in the first half.

“After the second fumble, I was kind of just out of it,” Gordon said. “(Simon) told me, ‘Keep your mind into it. You worked so hard. Nobody can take this moment from you.’ ”

He began the Badgers’ next possession with a 68-yard run before scoring again from 6 yards out.

The junior now has 1,909 rushing yards, the fourth-best single-season total in school history, and 23 rushing touchdowns through 10 games.

“This game meant a lot,” Gordon said. “Forget about the statistics. I knew if we lost this game, it’d be tough for us to get into the Big Ten championship.”

With wins the next two weeks against Iowa and Minnesota, that’s where UW would find itself on Dec. 6 in Indianapolis.

The Badgers have won five straight games, all by 10 points or more, and now their focus shifts to finishing off a division title.

“It was a tremendous victory for all of us. Every single person,” Andersen said. “We’ve got to back it up next week. That’s what you do. It’s easy to start, winners can sustain and maintain, but only the great ones can finish.

“That’s where these kids are at right now. This game was a lot of fun to be a part of.”

Jason Galloway covers high school sports for the Wisconsin State Journal. Galloway moved to Madison in 2013 after graduating from the University of Alabama and spending two years as the high school sports reporter for the Opelika-Auburn News in Alabama.

When you consider the opponent and the circumstances, it could be seen as the most dominating one-game individual performance in FBS history.

Now the focus shifts to finishing strong against the two biggest rivals.

The title scenarios in the Big Ten’s West Division, with two conference games to play.

The UW legend says he's proud of the running back who knocked him out of the top spot of the school record book for single-game rushing yardage.

Iowa coach Kirk Ferentz has great respect for the No. 14 Badgers as the Hawkeyes prepare for Saturday's game in Iowa City.

Badgers football: Only one speed bump on Melvin Gordon's run to glory

Western Illinois (4-7) is the only team to hold Gordon to less than 100 yards rushing this season. So how did the Leathernecks do it?

Slideshow: The 5 defining moments of the Gary Andersen 'era' at UW

Jim Polzin of the Wisconsin State Journal joins Rob Hernandez of BadgerBeat.com to break down the Badgers' huge win over Nebraska in a Big Ten…

Badgers AD Barry Alvarez BEFORE the game: 'No one like Melvin; he's the best'

Badgers athletic director Barry Alvarez, addressing fans before the game at Badgerville, was hyped up for UW's game with Nebraska and to watch…

Video: UW's Joel Stave says Melvin Gordon 'has done a tremendous job for himself ... & team, too'

Video: UW's Sam Arneson says 'I knew if I got my hands on a guy, ... Melvin was getting past'

The senior recorded a sack, an interception and a fumble recovery in helping UW hold the Cornhuskers to 180 yards of total offense.

The junior tailback credits the big boys up front for the holes he ran through en route to an NCAA single-game mark.

Images from before the Badgers/Nebraska pregame tailgating around Camp Randall Stadium.

Wisconsin Badgers running back Melvin Gordon points to the student section while running off the field after his team's win over the Nebraska Cornhuskers on Saturday in a game at Camp Randall Stadium in Madison.