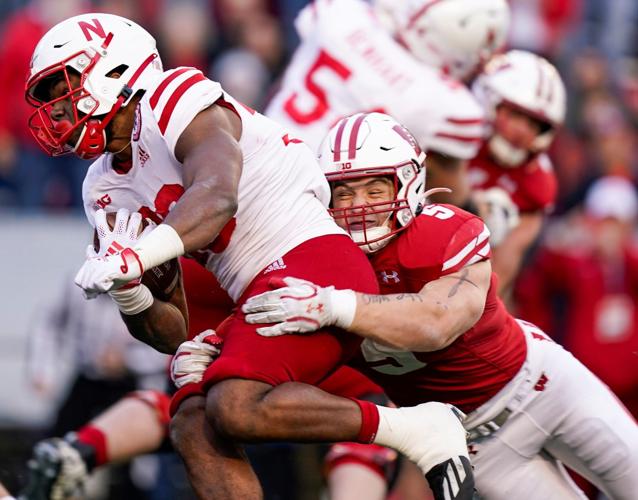 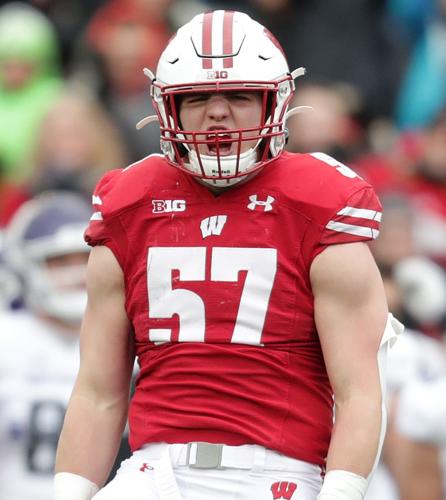 UW linebacker Jack Sanborn celebrates against Northwestern. He was a first-team selection by the coaches after making the media's third team last season.

Inside linebacker Leo Chenal was a frequent visitor in opponents’ backfields for the University of Wisconsin football team this season, disrupting run and pass plays.

His performance was rewarded with the Big Ten Conference’s Butkus-Fitzgerald Linebacker of the Year Award along with a first-team All-Big Ten nod from both coaches and media.

Senior inside linebacker Jack Sanborn joined Chenal as a first-team selection, earning his honor from the coaches.

The last UW inside linebacker to earn first-team All-Big Ten honors was T.J. Edwards in 2019, and the last time the Badgers had two linebackers earn first-team all-conference nods was 2012 (Mike Taylor, Chris Borland).

All 11 defensive starters for UW earned a Big Ten honor.

Chenal leads the Badgers and is second in the conference with 106 tackles despite missing the first two games after contracting COVID-19. His seven sacks are a team-high, as are his 17 tackles for loss. He ranks fourth in the league in sacks and second in tackles for loss, but he had the most tackles for loss per game (1.7) in the Big Ten.

Chenal joins Borland (2013) and Joe Schobert (2015) as the program’s linebackers to win the conference’s linebacker of the year award.

Sanborn was a third-team media selection last season and is UW’s second-leading tackler (88). He has a career-high 14½ tackles for loss and he recorded 3½ sacks. His four quarterback hurries are tied for second for UW, and he recovered a fumble in a loss to Notre Dame.

UW nose tackle Keeanu Benton was a unanimous second-team selection on the defensive line. He produced 24 tackles, including five for loss and 2½ sacks, while also recovering two fumbles and breaking up two passes this season. It is his first career all-conference honor.

Michigan State’s Mel Tucker — a former UW defensive back — was named the Hayes-Schembechler and McClain Coach of the Year after guiding the Spartans to a 10-2 season.

The Badgers (8-4) learn Sunday which bowl game they’ll play in and who they’ll face in that game.

(Selections are consensus unless otherwise noted)

Defensive lineman of the year and defensive player of the year: Aidan Hutchinson, DE, Michigan

Defensive back of the year: Riley Moss, CB, Iowa 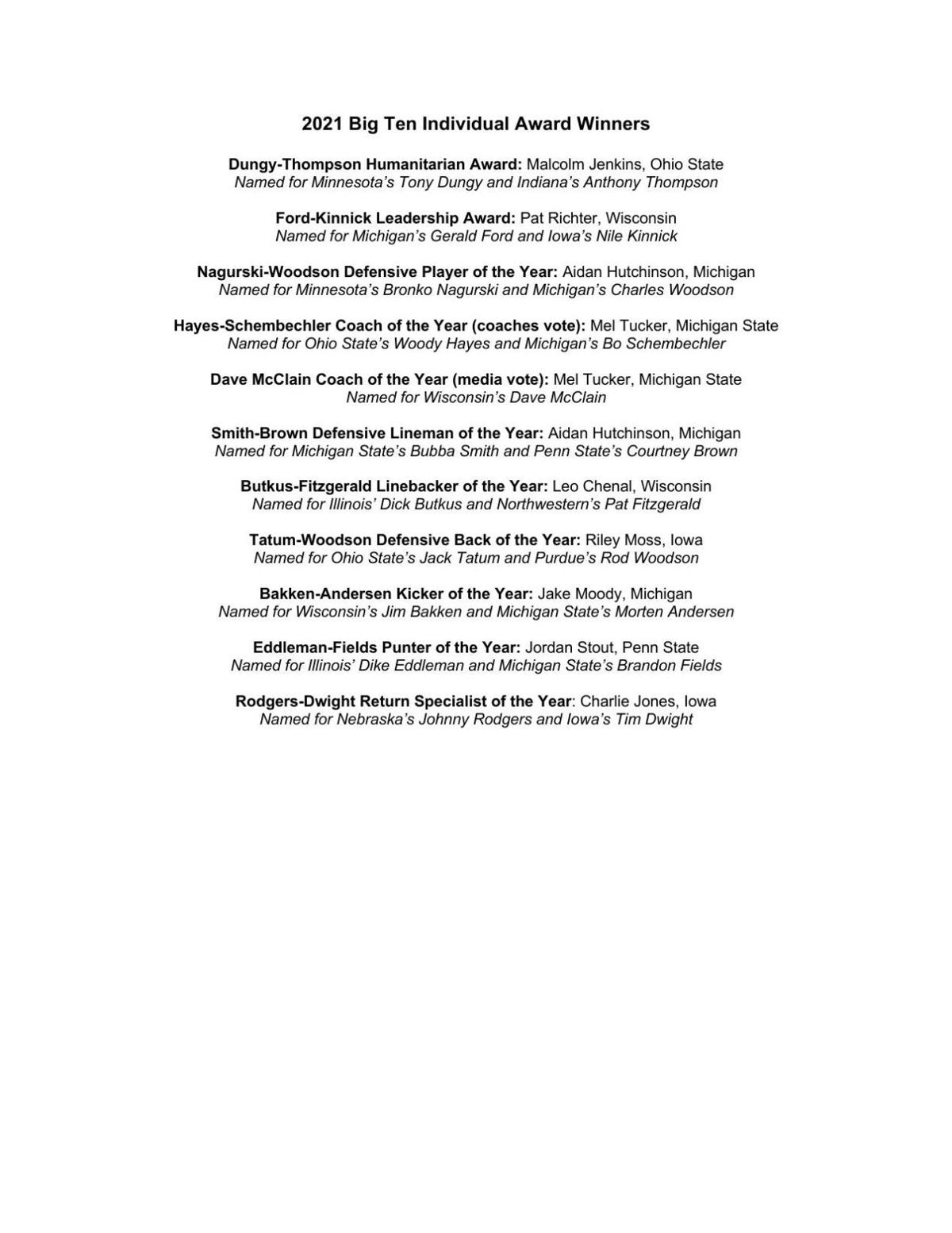 (Selections are consensus unless otherwise noted)

Take a hard look in the mirror

Expectations every year is that the Badger should win the West. 3 of the last 4 years they have not. They had a chance for a successful season after a 1-3 start, but that fell short with tonight’s loss. Chryst needs to re-evaluate the direction of the program.

As for the defense, it remains vulnerable to good quarterback play. The Wisconsin secondary is full of gritty, sound guys who are not elite athletes. Badgers’ pass rush can’t compensate for coverage limitations against good teams.

A complete & utter Axe-whopping. Let the sun set on another disappointing season. pic.twitter.com/TWfxKNqnzJ

Starts at the top

So many bad decisions. Kicking that FG down 7 in 4Q with a kicker who’s long is 43 yards. Has struggled all season with longer kicks. Outdoors, in the cold. He isn’t making a 48 yarder. Then the timeout, punt, false start, go for it on 4th down when trailing by 10 under 5mins 🤷‍♂️

Meh. Would’ve been much worse if we realistically had a chance for the CFP. This just prevented us from probably losing to Michigan next week.

Far from the top

Don’t have to be elite to beat the Gophers though. This performance today was embarrassing putting it nicely

It's tough bc Chryst has a decent record, but not against ranked teams or big games. Lost twice to MN and can't even win BT West. I think Wisc ADs are fine with average seasons, but don't think Chyrst is the answer to win a Big Ten title. QB Coach/Playcaller that was worst part.

A banged-up, ineffective B. Allen really doomed the offense. Surprised they didn’t sub in Julius Davis for some fresh legs. Receivers dropped passes, got beat. Mertz still work in progress. Weren’t going to beat MI in any event.

3 weeks ago (after the win vs Rutgers) I replied to @JimPolzinWSJ with: “I’m still waiting for @BadgerFootball to win convincingly against 1) A respectable opponent who 2) Doesn’t continually turn it over deep in their own territory”

Ready for a new role

How low can he go?

They played jump around after the game. I hate pj fleck.

Hearts not in it

From the players to the coaching, this was never a team playing for the Axe, let alone a Big Ten Championship Game. The most disappointing loss for Wisconsin under the leadership of Paul Chryst.

Straight up beaten in every facet of the game…Allen is clearly hurt, but too many players failed to make plays. Coaching was painful

Barry out of retirement to coach.

Looking lost out there

10 years ago, Paul was a creative football mind with a Badger offense that was balanced, efficient, and high scoring. The game has passed him by. His offense has gotten stale and predictable. Today it was painful to watch. Time to make Jim Leonhard our HC and hire a modern OC.

There's one way to look at it

In need of an overhaul

Coaching is horrible and QB is worse. They better give Hill a real shot next year as going nowhere with Mertz. Also really need to look at that OL. We used to always be good there, but not this year. D had the tipped ball pick 6 but did little else today. Bad play all around

Slipped through their fingers

This was a badly played game by the Badgers today. No ground game and no O line and no passing game spells loss big time. Disappointing loss considering our 7 game win streak But No axe, no B1G championship game but……a bowl game to b determined.

What a day for this team not to show up. Poor play on offense and defense.

Same old story, played just well enough to have a meaningful game today but laid that same egg on the field… no imagination in this team, don’t have the players? Could be but use what ya got and create a game plan exposes Mn flaws, they have them!

Felt like first losses of the season...confusing play calling, OL not good enough, etc. Continued concerns with Chryst management and inability to adapt in game.

Also, attrition finally caught up in the RB room.

If not now, when?

I think it’s time to have a serious discussion about PC. Offense is stale and Mertz hasn’t progressed at all since he’s been here. Very disappointing loss today.

I read all the comments below. Chryst termination will not happen until after next year. Why? Our road schedule in 2022 is difficult. Could end up 6-6 or 7-5 only because we have 3 cupcakes at home.

One of the more disappointing, lethargic, uninspired losses of the Chryst era, with a division title up for grabs

Wisconsin will face Berger and the Spartans early next season.

Green-May finishes his Badgers career with 20 games played, eight tackles and a sack.

Jim Polzin: Wisconsin football's failure against rival Minnesota 'a disgrace to the program'

The Badgers started the season talking about making history and completing unfinished business. They ended it by getting pushed around by a rival they've dominated.

State playoffs are winding down across the country. But a couple of incoming Wisconsin players still had big games, including a recruit from Pennsylvania and two incoming receivers.

The Badgers end the regular season unranked after losing at Minnesota.

The Badgers finished with three sacks, but their inability to make Tanner Morgan uncomfortable allowed the Gophers to win back Paul Bunyan's Axe.

Red Zone podcast: A look to the future after the Badgers lose Paul Bunyan's Axe

State Journal beat reporter Colten Bartholomew and columnist Jim Polzin break down the Badgers’ loss to Minnesota, next steps for the program and the Big Ten title game between Iowa and Michigan.

Michigan moved up to No. 2 in the second-to-last College Football Playoff rankings, joining Georgia, Alabama and Cincinnati in the top four heading into conference championship weekend.

Pair of area football recruits to walk on at Wisconsin

The Badgers football team added a lineman and linebacker from the state to the 2022 recruiting class.

The Badgers' use of motion, personnel packages and runs on first down stood out after analyzing each snap.

What went right and what went wrong for the Badgers football team as it waits for a bowl game announcement.

No. 2 Michigan routs No. 15 Iowa in Big Ten Championship Game

The resurgent Wolverines (12-1, No. 2 CFP) have won five straight and if they reach the playoff, as expected, would need one more win to return to Indianapolis to play for their first national championship since 1997.

UW linebacker Jack Sanborn celebrates against Northwestern. He was a first-team selection by the coaches after making the media's third team last season.