WAUKESHA — A distinct combination of laughter in the Dike house meant Kai Lermer was over.

Chimere Dike, now a junior University of Wisconsin wide receiver, had his best friend in the house often, part of a crew of about eight boys who played sports and ran around together in their hometown of Waukesha.

But Dike’s mother, Mary, could always tell when Lermer and her son were together.

“No one made Chimere laugh like Kai did,” Mary said. “The way they giggled together just warmed my heart.”

Laughter was a significant part of Chimere Dike’s youth football camp Saturday at Waukesha North High School, the first in what Dike hopes is an annual event benefiting Lermer, who died from a rare heart condition in 2019. There was plenty of instruction and skill work, led by Dike and 13 other UW players who made the hour drive east, but there was also a focus on the more than 70 campers having fun between drills.

“Obviously we love football, but for us (college players), it’s usually in a super serious scope,” Dike said. “To be able to have the pure joy of being a kid and playing the game introduced to you and shown to you, it’s refreshing.”

Lermer attacked sports with pure joy as well, putting in the work when it was time to, but always cracking jokes on the sidelines. Lermer grew into a talented football, basketball and track athlete who had college sports in his future if he chose that path. Lermer would’ve jumped at the chance to be at Dike’s camp, according to those who knew him well. Instead of being involved in the camp, Lermer served as the catalyst for its creation.

To compete in the 1970s, Wisconsin women's athletes dealt with cramped cars and uniform sharing

Lermer had Wolff-Parkinson-White syndrome, a condition in which a person has an extra electrical pathway in the heart, leading to a rapid heartbeat. Lermer suffered cardiac arrest while playing basketball with friends in March 2019 and died a few days later at the hospital. Dike had been with Lermer the day he collapsed, grabbing lunch before Lermer went to the court.

Dike’s camp will benefit the Kai Lermer Memorial Fund, which was started by Lermer’s family to raise awareness about sudden cardiac arrest and the benefits of echocardiograms, an ultrasound screening of the heart that reads how blood is pumping through the muscle. An EKG could’ve detected Lermer’s condition, a fact that motivated Lermer’s family to act.

Gov. Tony Evers on March 29 signed into law the Kai 11 bill, requiring high schools and other youth sports leagues to provide parents with information about sudden cardiac arrest. The law provides avenues for athletes to get EKGs prior to starting competition. Lermer’s parents, Patty and Mark, spearheaded the bill’s creation and passing.

The Lermers were on hand Saturday, as were an army of volunteers lending a hand to ensure the camp ran smoothly. Mary and Uche Dike, Chimere’s father, said the outpouring of support in Waukesha was overwhelming. They had to turn down help from some willing to come to the field Saturday because they ran out of jobs for folks to do.

“Rallying the community around it was easy,” Uche said. “These people are coming from everywhere. People who see things posted about Kai, they all have something to say or something to add on. ‘If you need me for anything, just let me know.’

“It’s been really eye-opening knowing that everyone else also has Kai in mind, and his memory’s fresh in people’s minds at this time. And having this camp obviously is something that they wanted to do to make sure that his memory doesn’t fade.”

Dike’s role as host, instructor and fundraiser was interesting for his parents to watch blossom. He’s had help, especially from his representatives at Team Lammi, a Milwaukee-based agency, and the football program at Waukesha North. UW teammates such as quarterback Graham Mertz, tailback Braelon Allen, outside linebacker Nick Herbig and safety Hunter Wohler were among those helping kids through drills and signing autographs for those who paid for a meet-and-greet.

“We had a great time out here,” Herbig said. “Seeing kids run around out here, I was having little flashbacks. That used to be me looking up to players like that. Everything coming full circle like that is really special.”

Wohler — a Muskego native who competed against Dike in their prep track and field days and remembers hearing of Lermer’s passing — said he enjoyed imparting knowledge on the next generation of players and benefiting Lermer’s fund.

“The plans they have for the money, it’s really going to be good for high school kids, high school athletes,” Wohler said. “I’m excited to see how it takes off.”

Leaning on high school teammates was critical for Dike’s grieving process following Lermer’s passing. Mary said Dike and his and Lermer’s other close friends — a handful of whom were on hand Saturday — talked about Kai often in order to heal. The camp served as another cathartic step. A day to remember, celebrate and honor a departed friend.

“If they didn’t have that group of boys to help navigate that through, I don’t know how well Chimere would have done if he didn’t have that core group,” Mary said. “They all were missing (Lermer) terribly. So they just lifted each other up and supported one another. And they still do. They still talk about him, they still hang out when they can, they support each other immensely. It’s been really beautiful to see.”

The Rock Springs native will represent the Badgers as a Bill Walsh Diversity Coaching Fellow. She'll spend training camp as a coach for the Tennessee Titans.

A crucial position hasn't yet been filled, but some trends in the Badgers plan of attack for this year's recruiting class have emerged.

As Title IX turns 50, a look back at the conditions for women's athletes at Wisconsin in the 1970s shows the law didn't flip a switch for equity but gave proponents a legal basis to push for change.

From La Crosse to Wisconsin, Johnny Davis had his sights set on the NBA draft

Johnny Davis, the Big Ten Player of the Year, trained under his father, a former NBA draft pick and player himself. The former Badgers guard is a projected lottery selection in Thursday's NBA draft.

Jim Polzin: Why the NBA draft is a banner moment for both Johnny Davis and Wisconsin men's basketball

Greg Gard is scheduled to be in attendance when Johnny Davis hears his name called Thursday. Here's why it's important for the program to build on this crowning achievement for one of its stars.

The Badgers secure another commitment for their future secondary from a four-star Georgia cornerback.

Former Badgers standout Melvin Gordon rushed for 918 yards and eight touchdowns for Denver last season and had 28 receptions for 213 yards and two scores.

The three-star recruit received high praise from his high school coach, who called his standout player a “film junkie” and “whiteboard genius.”

The salary pool for Badgers football coaches will be significantly larger than last year's.

Three-star athlete Trech Kekahuna has the ability to play a number of positions, something the Badgers will hope to utilize after he joined the program's 2023 recruiting class.

The decision by the Los Angeles schools — two of the NCAA’s most decorated athletic programs — comes almost a year after Oklahoma and Texas formally accepted invitations to join the SEC in July 2025.

Some of the biggest games in Badgers football history have been against UCLA and USC, programs joining the Big Ten Conference in 2024.

Learn more about the Badgers' latest commit for their 2023 class, an offensive lineman from the state of Illinois whose offer sheet exploded in the month of May.

Why tight bonds between teammates matter for Wisconsin football

From appearing at each other's charity events to spending time together at cookouts, the trust and relationships formed away from the field make a difference on it for the Badgers.

The Badgers are looking to replace a pair of multi-year starters at wide receiver, and Skyler Bell is proving up for the challenge. 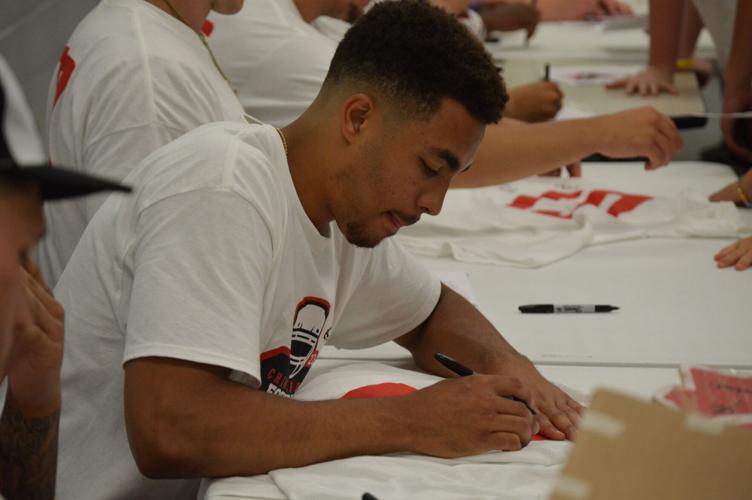 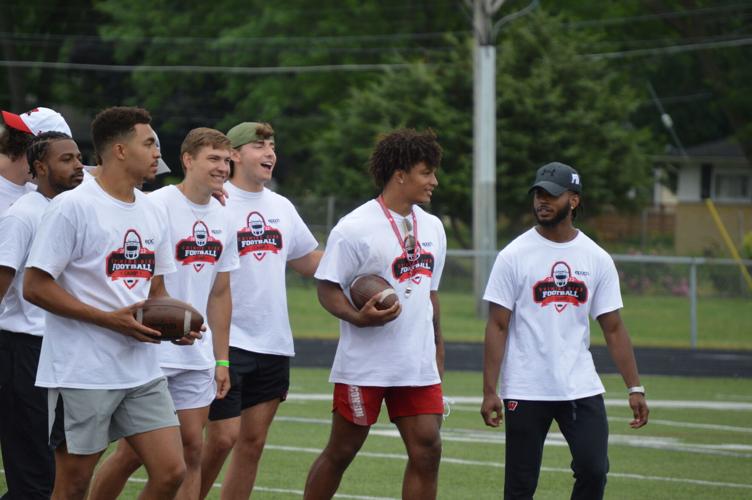 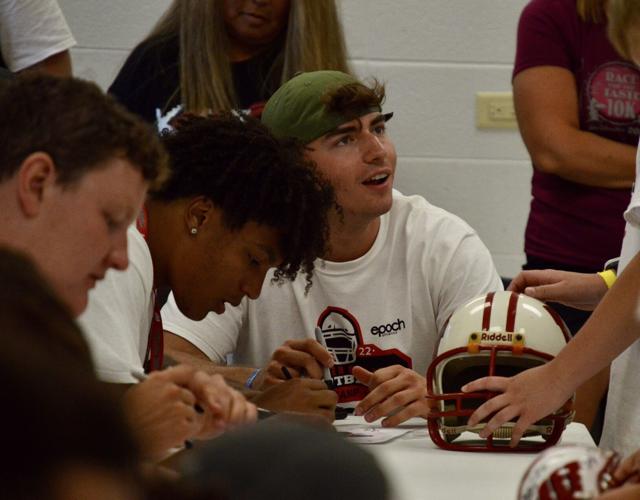 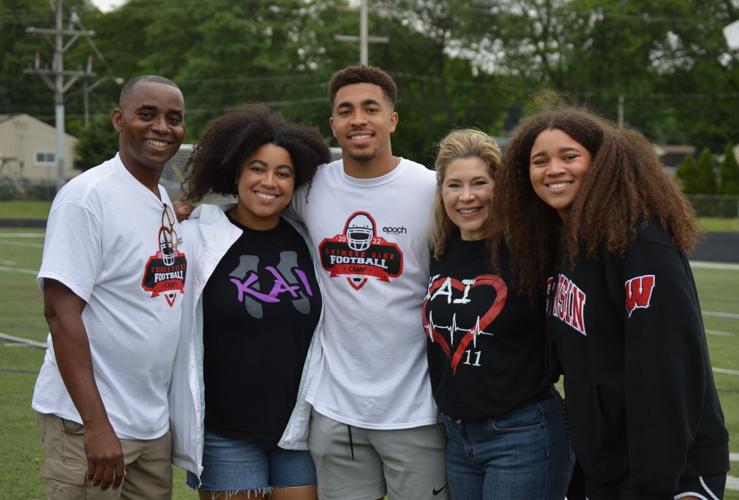