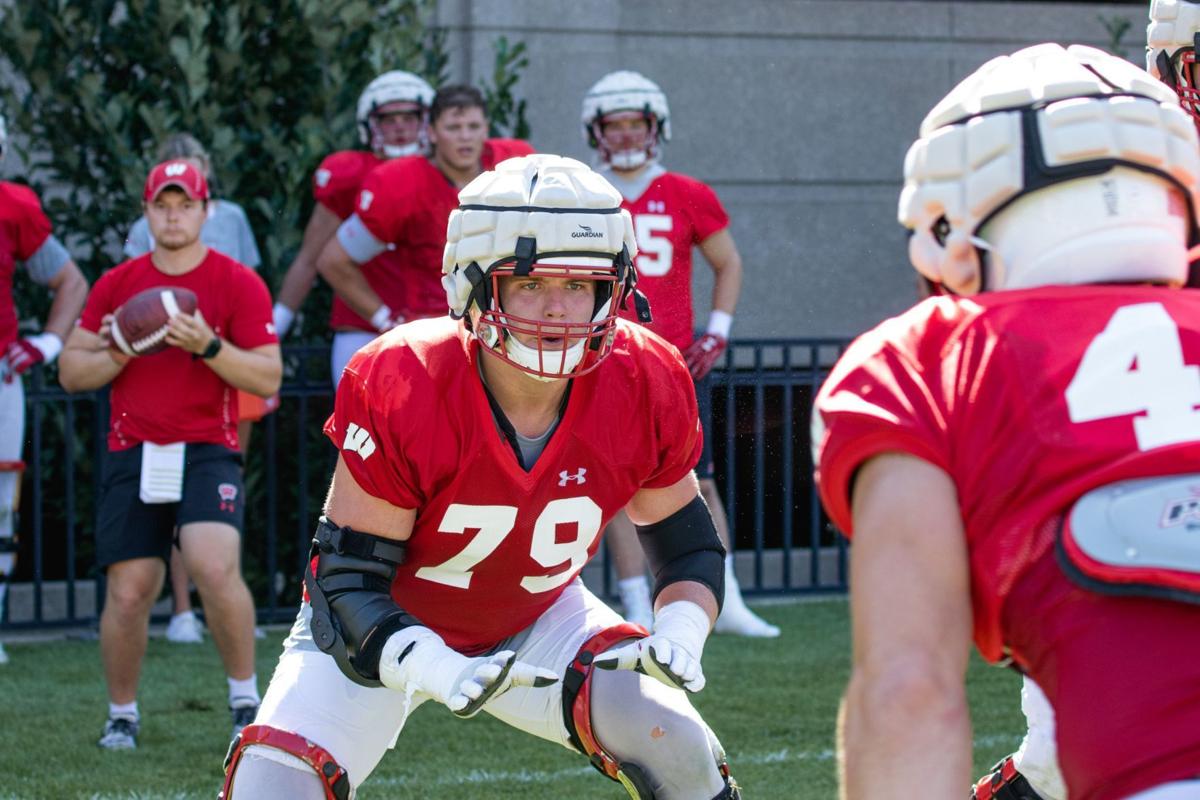 Todd Nelson played on the offensive line for the University of Wisconsin football team in the 1980s. He now has a son playing for the Badgers and another one set to join the program a year from now.

“This was not some big, grand plan,” he said earlier this week, “or anything like that.”

Maybe not for him. But it certainly was for Jack Nelson, a 6-foot-7, 304-pound redshirt freshman who’s the leading candidate to start at right guard when the Badgers open the 2021 season Sept. 4 against visiting Penn State.

The oldest of Todd and Sarah Nelson’s four boys — yes, they’re all linemen — leaned over a railing at Camp Randall Stadium following a training camp practice and looked around at a place that’s been the dream destination for as long as he can remember.

“My dad was the guy who played on the Badgers football offensive line,” Nelson said. “I was like, ‘Shoot, that’s going to be me.’”

Nelson orally committed to the Badgers as a sophomore at Stoughton High School on Oct. 30, 2017. That pledge of allegiance never wavered even when Michigan and other programs tried to convince him to change his mind.

When Nelson finally arrived at UW last summer, it all felt very surreal and he’d often find himself distracted in practice during his first season on campus. Was he really in the huddle at Camp Randall Stadium, wearing a Badgers uniform?

Now, there’s no time to lose focus because Nelson is battling for significant playing time. A lifelong tackle, he was moved to guard in the offseason in part because UW offensive line coach Joe Rudolph liked the idea of pairing Nelson with right tackle Logan Bruss, an athletic duo who complement each other and “move at an explosive tempo.”

Nelson has some nastiness to him and plays to the whistle. He’s managed to both annoy and earn the respect of the defensive linemen he goes against every day in practice.

“He’s an aggressor,” UW nose tackle Keaanu Benton said. “I love it. Just coming out and seeing him hit guys every play, play after play, he does not give up. He’s a pest. When you think the play is over with, he’s right on your hip until that whistle blows, which is what I love about him.”

The opener is less than three weeks away but Nelson won’t allow himself to think that far ahead. Asked about how much he thinks about nailing down a starting spot, Nelson said the only thing that mattered to him was learning from the mistakes he’d made in the practice that had just ended.

Jim Polzin: How Wisconsin Badgers assistant Joe Rudolph was able to handle a demotion with dignity

After the interview, Nelson planned to shower and go back to his apartment, where he’d watch video from the practice. He’d rewind after bad plays and watch them over again. And then again. There’d be another review session later in the day with Rudolph and the entire offensive line group.

“Just preparing myself to be the best guard I can be for my team,” Nelson said.

Todd Nelson played at UW from 1984-88, starting at guard for three seasons as the Badgers won a combined seven games during that span under Jim Hilles and Don Morton.

Red Zone podcast: A confident Paul Chryst and breaking down the Badgers' OL and DL

The former Madison Memorial athlete was a projected second-round pick entering his senior season. But UW went 1-10 under Morton and Nelson’s stock slipped; he ended up being selected in the 12th round — pick No. 318 overall — by the Arizona Cardinals and was cut in training camp. The following season, it was the Buffalo Bills who cut Nelson and that’s where his playing career ended.

Some of Nelson’s teammates with the Badgers remain his best friends and felt proud as the program was built into a Big Ten power under Barry Alvarez. Now, it’s Nelson’s former UW teammate Paul Chryst leading a program that, starting next season, will include two Nelsons on the roster: Barrett, a 6-6, 255-pound offensive tackle/defensive end set to start his senior season at Stoughton, is a commitment in UW’s 2022 class.

Todd Nelson helped coach his sons in youth football and encouraged them to embrace being linemen. He didn’t need to twist Jack’s arm.

“I really had no interest in playing anything else,” Jack said. “I was never the guy who wanted to throw the ball or run with the ball. Tight end? None of that. I never wanted to be that. It was always the offensive line for me.”

Specifically, it was always the UW offensive line for Nelson, a big, grand plan that never needed a revision.

The Badgers have been ranked in the preseason edition of the poll 30 times, the highest being No. 4 in 2018.

John Torchio’s play between spring practices and fall training camp has earned him a new nickname with one of his fellow Badgers safeties.

Stiff competition for snaps during training camp should lead to a bounce-back fall for the Wisconsin outside linebackers.

The offense lands some counterpunches on the defense after a slow start to fall camp.

In the fifth part of our position-by-position breakdown series, UW nose tackle Keeanu Benton breaks down the offensive line as we take an in-depth look at the group tasked with protecting Graham Mertz.