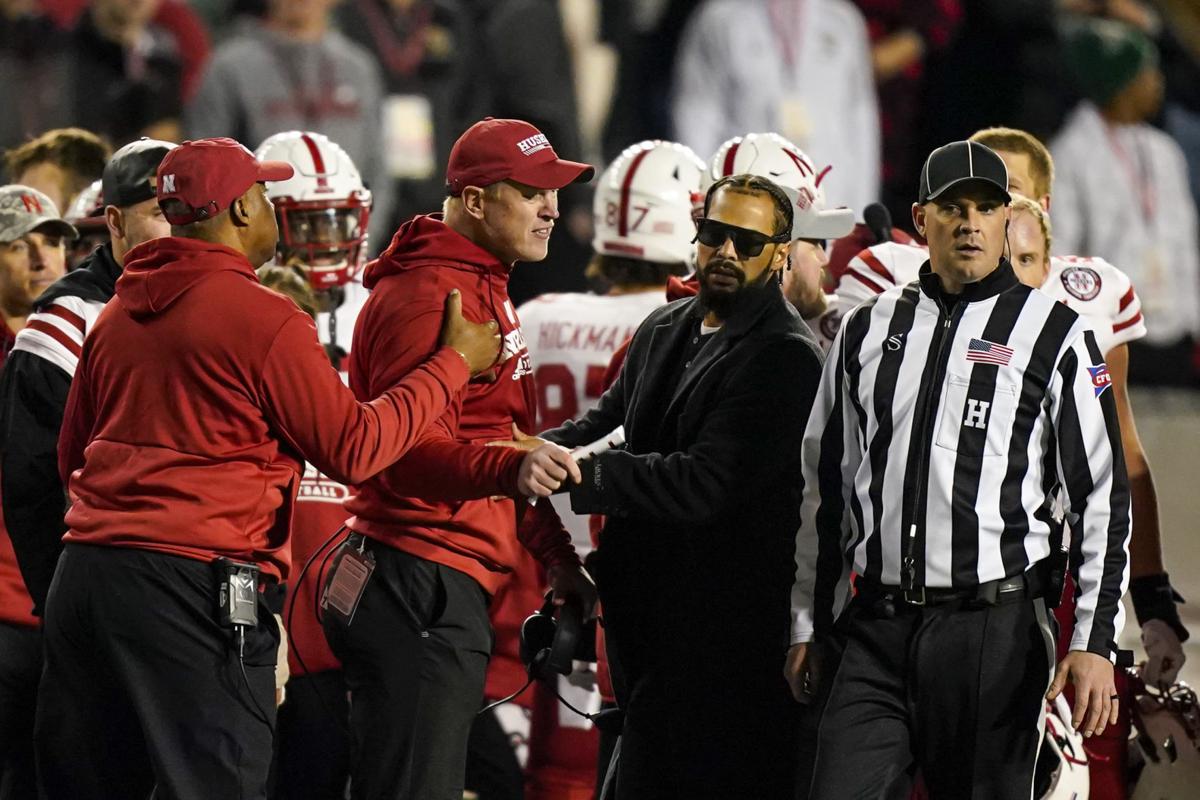 Nebraska coach Scott Frost is restrained while arguing a call during the second half of the team's NCAA college football game against Wisconsin on Saturday, Nov. 20, 2021, in Madison, Wis. (AP Photo/Andy Manis) 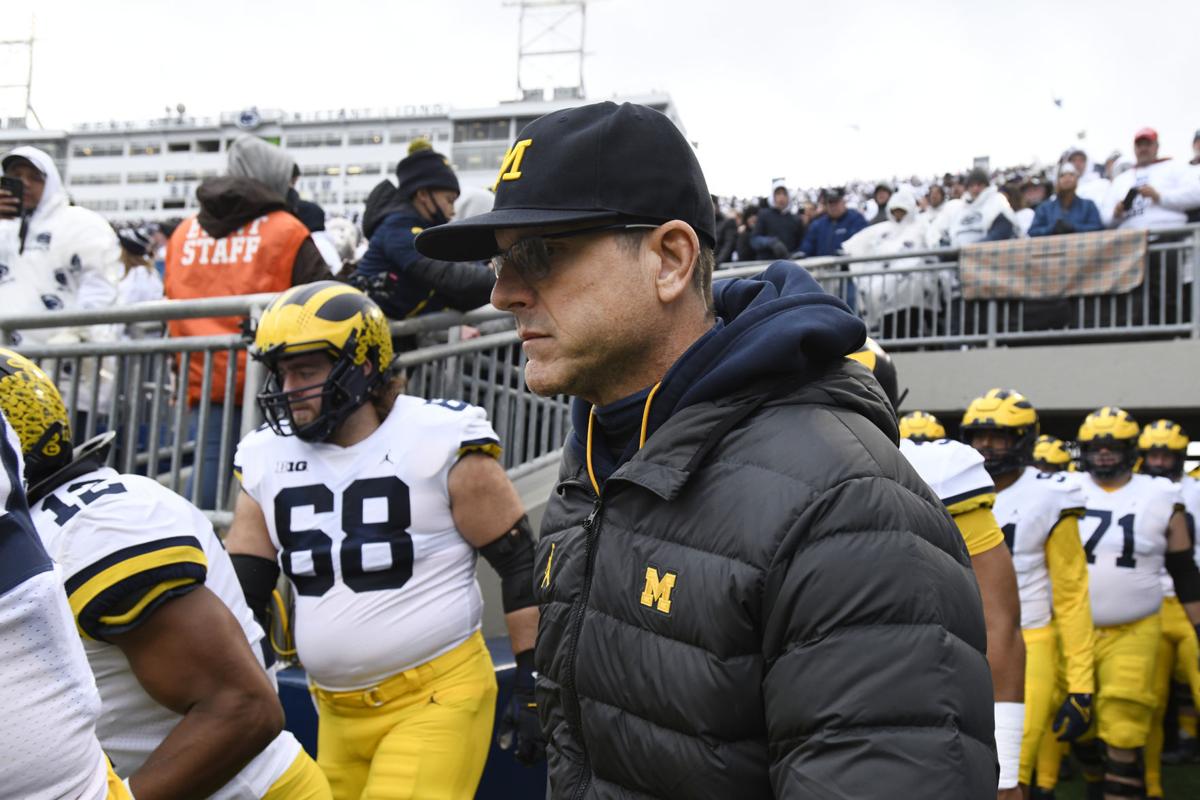 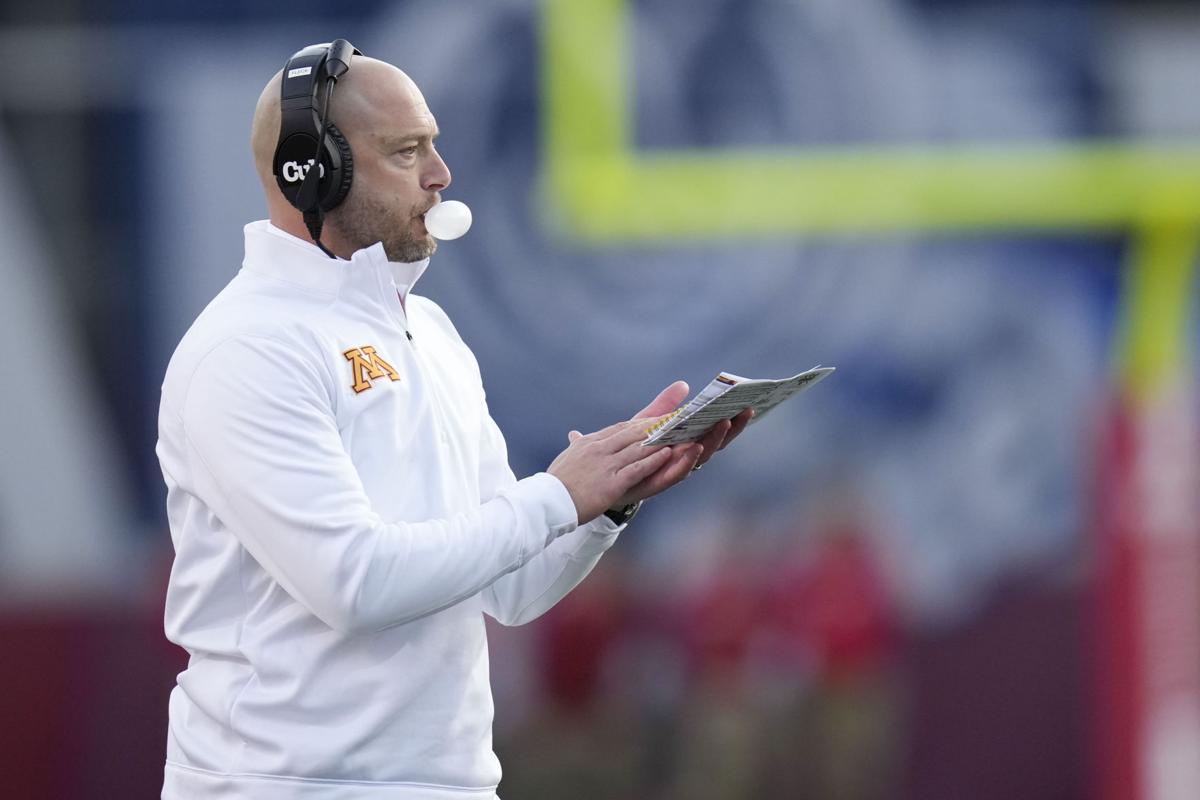 Minnesota head coach P.J. Fleck claps after his team scored against Indiana in the first half during an NCAA college football game in Bloomington, Ind., Saturday, Nov. 20, 2021. (AP Photo/AJ Mast)

Minnesota’s P.J. Fleck sees the rampant coaching turnover going on this season and feels grateful about his relative security.

“There are a lot of things going on around the country, coaches who had great years last year that don’t have jobs now a year later,” said Fleck, who owns a 33-23 record in five seasons coaching the Gophers.

Coaches across the Big Ten have reason to feel thankful on this holiday week.

The Big Ten is the only Power Five conference that hasn’t had at least one head coaching change already this season. That follows an offseason in which only one Big Ten school fired a coach, with Illinois hiring Bret Bielema after Lovie Smith went 17-39 in five seasons. Penn State announced a 10-year deal for coach James Franklin.

“I think there’s a little bit of an old-school mentality from the administration at a lot of these universities,” ESPN analyst and former Ohio State quarterback Kirk Herbstreit said. “I think that they pride themselves on prioritizing the importance of athletics. And they’re obviously very, very important, but people can roll their eyes all they want, but how a guy runs his program, is he graduating his players, are they good citizens, those things add up.”

Only three of the 14 Big Ten coaches (Bielema, Rutgers’ Greg Schiano and Michigan State’s Mel Tucker) are in their first or second season on the job. Rutgers fired Chris Ash four games into the 2019 season and Mark Dantonio retired at Michigan State in February 2020.

“I just think that the intensity of social media, especially in that middle tier of the Big Ten, I just don’t think it’s as rabid as you might find in some other regions,” Herbstreit said. “Most notably the SEC, where it’s win a championship today. Win every game.”

Ten of the 14 Southeastern Conference members have interim coaches, lame-duck coaches or coaches in their first or second seasons running their teams.

LSU announced last month that Ed Orgeron wouldn't be back next year, even though he led the Tigers to a national championship two seasons ago. Dan Mullen, who coached Florida to an SEC East title in 2020, was fired Sunday after losing six of his last nine games.

By contrast, Nebraska’s Scott Frost has produced a losing record each of his four seasons but will be back next year, though he took a pay cut and fired four assistants.

Big Ten network analyst and former Indiana coach Gerry DiNardo says the expectations are the same at any of the schools that have what he describes as “national championship or bust programs,” regardless of conference.

But there’s a big difference.

“In the Big Ten, there’s only one national championship or bust program,” DiNardo said in reference to Ohio State. “In the SEC, there’s probably five.”

In the Pac-12, three of the 14 member schools have fired their coaches since the start of this season ( Clay Helton at Southern California, Nick Rolovich at Washington State, Jimmy Lake at Washington).

Other Power Five programs to change coaches during the season include TCU, Texas Tech and Virginia Tech.

ESPN analyst and former Penn State quarterback Todd Blackledge is the son of Ron Blackledge, a longtime college and NFL assistant who was Kent State’s head coach from 1978-80. He sees a difference in the way Big Ten schools are handling things.

“I think the Big Ten wants to consider themselves more civilized in that their mission is more than just football,” Blackledge said. “Maybe that’s why they show more patience.”

Blackledge then adds this caveat.

“Make no mistake,” Blackledge said. "Football still drives the train at every Big Ten school just the way it does at all the other Power Five schools. Being successful in football is very, very important for all the universities.”

Indeed, Nebraska essentially put Frost on notice even while keeping him. Nebraska is hoping it can match the success of Michigan, which brought back Jim Harbaugh on a new five-year deal after a 2-4 season in 2020. Michigan now is 10-1 and ranked sixth in the Associated Press Top 25.

Frost and Harbaugh are former quarterbacks coaching their alma maters, which may help explain why both schools were patient with them.

DiNardo notes that the lack of recent coaching changes in the Big Ten also is cyclical to a certain extent because many of the coaches with the league’s tougher jobs haven’t been there quite long enough to be evaluated fully.

At Minnesota, Fleck understands what’s expected of him. He just likes being at a place where he has a good working relationship with his bosses and in a conference that often rewards patience.

“I’m sure at some point you don’t win enough games at some point, people get fired,” Fleck said. “I’m no different than that. I’m not exempt to that. But I think when you look back on it, at the end of the day, I’ve always said: ‘Did we make it better? Was it better when we left it than when we found it?’ Somehow, some way.

“That is not comparing it to anybody else. That is just, ’Did you make it better and make your players better somehow? That is all you can do in a world that we are living in right now where it’s just win at all costs.”

Badgers move up in CFP Top 25 Poll after beating Nebraska

A one-touchdown win against Nebraska last week bumped the Badgers up in the College Football Playoff Top 25 Poll.

A team from outside the Power Five conferences has never been selected for the semifinals in the previous seven years of the College Football Playoff.

Badgers freshman running back Braelon Allen already has a plan for what he wants to do with his brand, a deal with Iron Joc sportswear and a UW alum for an agent.

Wisconsin heads to Minneapolis this week to play Minnesota in the Battle for Paul Bunyan’s Axe with a chance to secure the Big Ten West title.

For the first time in 2021 all the teams that were ranked in The Associated Press college football poll presented by Regions Bank last week stayed ranked this week.

In a college football season that has been dotted with upsets and surprises, the most talented teams are rising to the top.

Braelon Allen became just the sixth Badgers freshman to rush for 1,000 yards in a season. And that's after he didn't get a carry in two games this season.

Jim Polzin: Wisconsin football's offense owed the defense. It made good against Nebraska

The Badgers defense wasn't itself. But Braelon Allen, Kendric Pryor and the rest of the offense did their part to keep alive the Badgers' winning streak by holding off Nebraska.

Analysis: What Nebraska did to put up the most yards of the season on Wisconsin's defense

Pre-snap motion, max protections and good players put the Badgers' defense in binds against the Cornhuskers on Saturday.

C.J. Stroud tied a school record with six touchdown passes — all in the first half — as No. 5 Ohio State bolted out to a 49-point halftime lead on the way to a startling 56-7 rout Saturday that eliminated the Spartans from the Big Ten East race.

Before the Axe, Minnesota and Wisconsin played for the Slab of Bacon

The Slab of Bacon was a wooden carving that debuted in 1930 and was presented through 1943. The Gophers were 11-3 in those games.

Nebraska coach Scott Frost is restrained while arguing a call during the second half of the team's NCAA college football game against Wisconsin on Saturday, Nov. 20, 2021, in Madison, Wis. (AP Photo/Andy Manis)

Minnesota head coach P.J. Fleck claps after his team scored against Indiana in the first half during an NCAA college football game in Bloomington, Ind., Saturday, Nov. 20, 2021. (AP Photo/AJ Mast)