After more than a week of criticism, the Big Ten Conference answered why it postponed the fall sports season amid the COVID-19 pandemic.

Big Ten Commissioner Kevin Warren wrote an open letter to the “Big Ten community,” which was posted on the Big Ten website and shared on social media Wednesday evening. Warren wrote that the decision to postpone fall sports won’t be revisited, despite players and coaches’ pushes for an overturn, and that the Big Ten Council of Presidents and Chancellors’ vote on the matter was “overwhelmingly in support of postponing fall sports.” 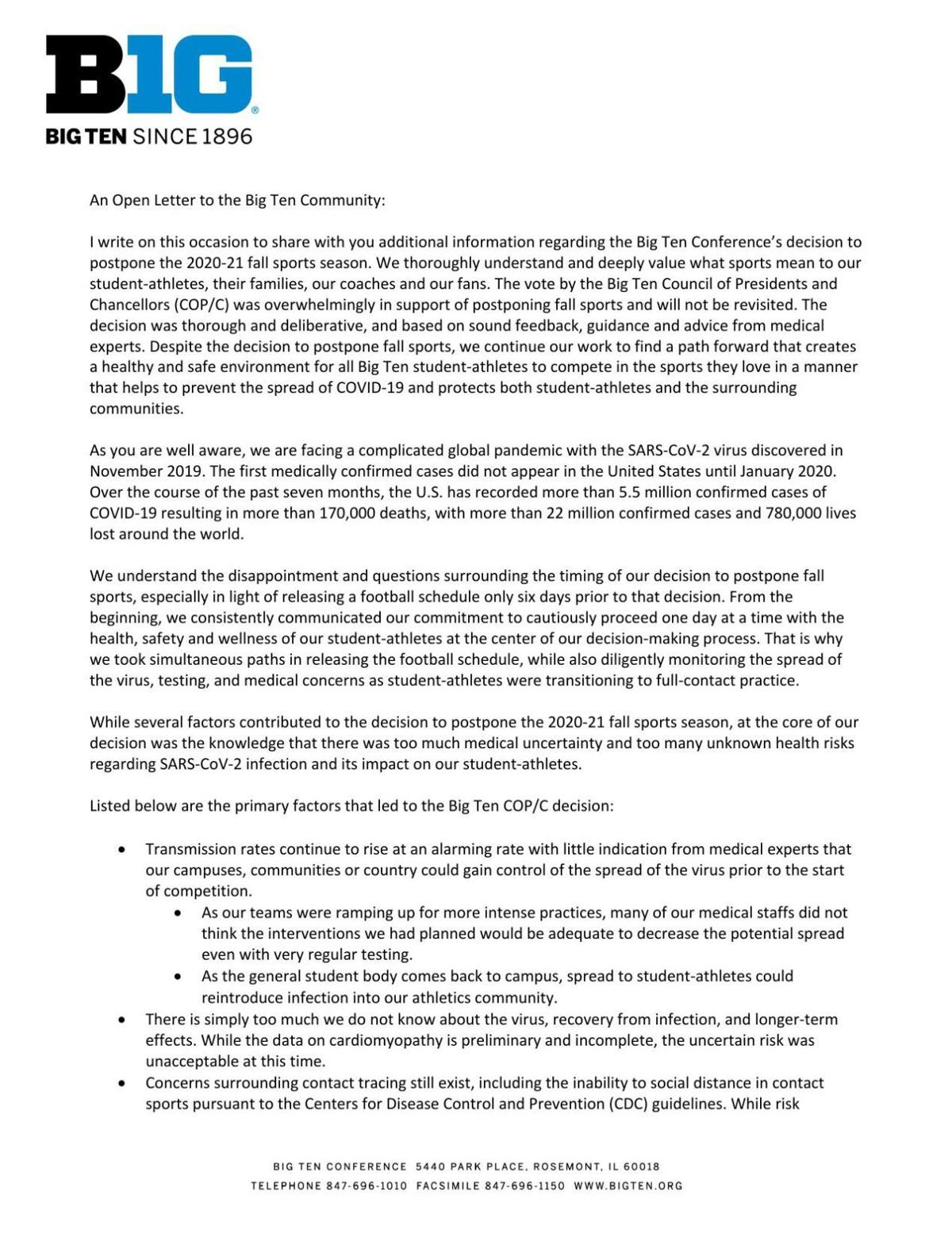 There had been debate, fueled by comments by administrators and coaches around the Big Ten, if a vote had taken place at all.

“We understand the disappointment and questions surrounding the timing of our decision to postpone fall sports, especially in light of releasing a football schedule only six days prior to that decision. From the beginning, we consistently communicated our commitment to cautiously proceed one day at a time with the health, safety and wellness of our student-athletes at the center of our decision-making process. That is why we took simultaneous paths in releasing the football schedule, while also diligently monitoring the spread of the virus, testing, and medical concerns as student-athletes were transitioning to full-contact practice,” Warren wrote.

When Warren appeared on the Big Ten Network on Aug. 11 to discuss the conference’s decision, he said the uncertainty surrounding the pandemic was the key factor, but didn’t go into further detail. In his open letter, Warren listed some of those concerns.

Medical experts gave “little indication” that Big Ten campuses could gain control of COVID-19 transmission prior to the start of the fall sports schedule, Warren wrote, and as practices ramped up, especially in football, Big Ten medical staffs “did not think the interventions we had planned would be adequate” to slow the spread. General students returning to campus was also a concern.

Other universities still planning to play fall sports, such as Notre Dame and North Carolina, have had to pause athletic activities and shut down campus due to COVID-19 outbreaks.

Warren also wrote that there was too much doctors don’t know about the virus in terms of recovery and long-term effects, including heart risks like myocarditis.

The conference also didn’t believe that sufficient coronavirus risk mitigation like physical distancing and face coverings could be achieved in contact sports. Availabilty of rapid testing was also an issue, Warren wrote. That concern could be alleviated if the SalivaDirect test, recently approved by the FDA, can be widespread and get results quickly.

“We understand the passion of the many student-athletes and their families who were disappointed by the decision, but also know there are many who have a great deal of concern and anxiety regarding the pandemic,” Warren wrote.

The conference is exploring scheduling models for football that begin in the winter, and is determining how many games can be played in a calendar year while keeping athletes safe. Warren wrote that the conference wants to hold a Big Ten Championship Game after the winter/spring season.

“We have tremendous appreciation and understanding regarding what participation in sports means to our student-athletes, their families, our campus communities and our fans. We will continue to make the best decisions possible for the health, safety and wellness of our student-athletes,” Warren wrote.

In another open letter released Wednesday, Ohio State athletic director Gene Smith said some teams could be back to competition in 2020.

"While a decision has been made by the presidents of the Big Ten Conference to postpone the fall season, we view this as a temporary delay, and (Ohio State president-elect) Dr. (Kristina) Johnson has directed us to prepare for the possibility of bringing at least some of our fall sports back to practice and competition by the end of the year," Smith wrote.

"We are actively planning for the winter and spring seasons for all sports, including the return of football."

So disappointed. I feel like if the Big Ten wanted to make it work they could have done it. Such a major bummer for the players. #BigTenBummer

Way to Gopher it

The only reasonable solution, as much as I hate it.

There is no way football will happen in the spring.

Not enough tests to test students every other day. Danger of long lasting heart conditions far too high.

We've failed at containing the virus over the past 5 months, and this is the outcome. Hate that this is where we are, but seems it's the only responsible choice right now.

As a huge football fan and ex-athlete, it pains me. But it’s the right call. Do a mini-season in Spring, and get ready for a full blown epic season Fall 2021.

What choices do schools have? If they aren't allowed fans in the stands, how will they cover the costs of athletics this year? Football pays for most everything. If they play with no fans, it would be a poor business decision.
TV contracts would be their only revenue.

Yes, yes it does

Right decision. Experience of NHL, MLS, PGA, NBA v MLB shows bubble is only safe way. Can’t do that with CFB. Schools need to figure out the student part first, then the athletic part can follow.

Do you have to ask?

Giving it their best shot

Lots of Badgers have been tested multiple times and things were in place. Sucks

Could it spell the end?

Death Penalty for the big ten unless all power 5 conferences do it.

Straight to the point

Waiting for the call

As the college football season approaches, players on the University of Wisconsin team are garnering national recognition as some of the best …

After a grim week for the University of Wisconsin football team, the Badgers got some welcome news Sunday.

'You didn’t even give it a chance': Badgers seniors angered by Big Ten cancellation

One doctor on the organization's COVID-19 advisory panel said she approved of the Big Ten's decision Tuesday and the one made later the same day by the Pac-12 because “that keeps the safety of the athletes as the No. 1 priority.”

Red Zone podcast: Punting on fall football — can it work in the spring?

State Journal beat reporter Colten Bartholomew details why the Big Ten punted on the fall football season, what role myocarditis played in the decision, and discusses if spring football can actually work.

UW coach Paul Chryst: “I know what our group is made of and I know what our intentions will be. Therefore, I’m confident that … we’ll find a way to get a lot out of whatever time we have until the next time we get to play a game.”

The athletic director and coach say any plan wouldn't amount to a full season.

The guarantee for the 2027 matchup is $625,000, according to SIU’s news release, the largest guarantee in the Salukis' history.

The NCAA Division I Council recommended that the Board of Governors approve eligibility and scholarship relief for fall athletes in the 2020-21 season, regardless of whether they compete in a potential spring season.

Despite a projected drop in revenue similar to Iowa's for the 2020-21 school year, UW's senior staff members said during a virtual staff meeting that the Badgers aren't moving in the direction of eliminating sports, sources said.

Safeguards have worked except in MLB; college football has almost no chance of succeeding and should shut down like the Big Ten Conference did.

UW and other teams not playing football this fall won't be considered for the AP Top 25 poll once games begin.

Van Lanen was one of 12 Big Ten Conference players to make either the first or second team.

Ex-UW quarterback Brooks Bollinger reflects on his time with the Badgers, the NFL and life after football.