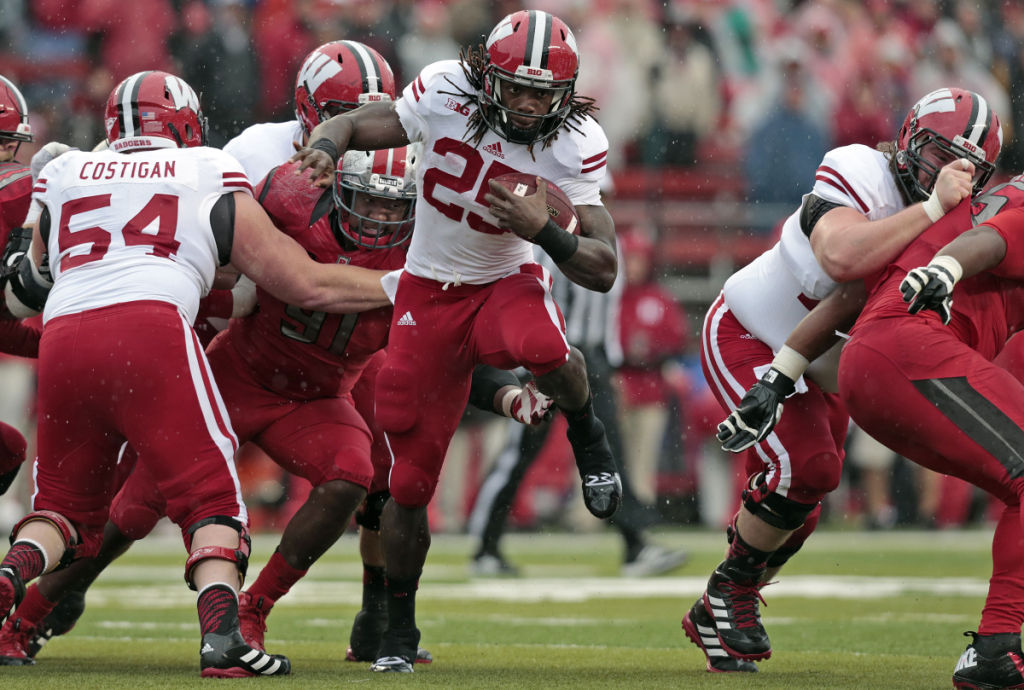 Badgers running back Melvin Gordon scores on a 13-yard run in the first quarter, just three plays after a blocked punt gave UW possession against Rutgers on Saturday at High Point Solutions Stadium in Piscataway, N.J. 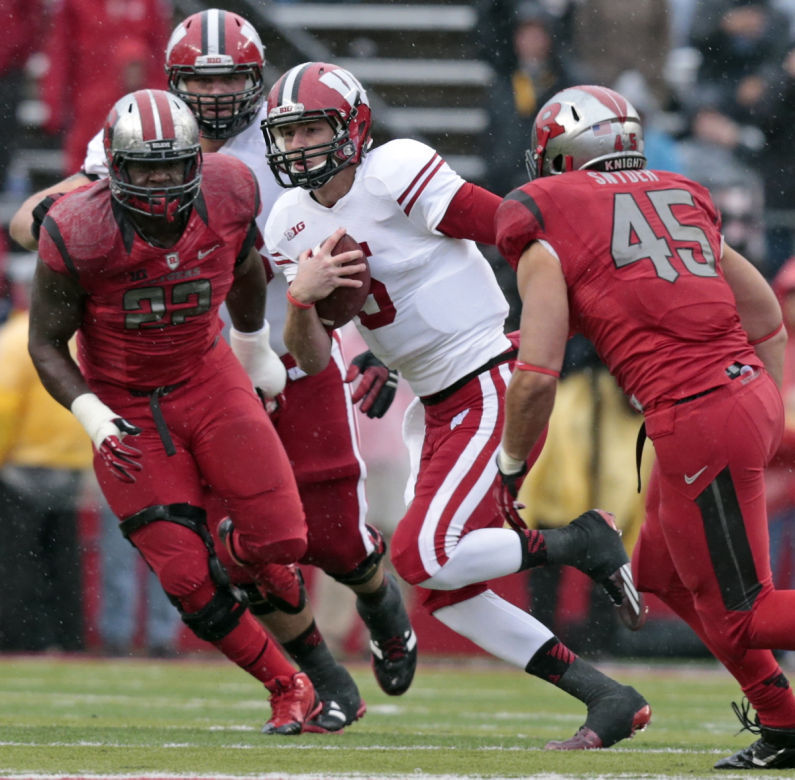 Badgers quarterback Tanner McEvoy scrambles for a first down. He finished with 20 yards on five carries.

PISCATAWAY, N.J. — The University of Wisconsin punt return unit knew what was coming.

The players knew on the practice fields and in meeting rooms days before, and still believed it just before taking the field in the middle of an ugly first quarter Saturday at High Point Solutions Stadium.

Rutgers punter Tim Gleeson was a slow worker, and the Badgers were going to take advantage.

A.J. Jordan burst through the line and reached his left hand out just in time to block Gleeson’s punt, jump-starting UW to a 37-0 victory after a stagnant start.

“I saw on the sideline that a lot of guys were energized from that play.”

The block gave UW the ball on Rutgers’ 20-yard line after the Badgers offense began the game with three straight three-and-outs.

UW running back Melvin Gordon, who had negative-1 rushing yards prior to the block, found the end zone three plays later.

The Badgers then scored on three of their next four drives on their way to a second straight blowout against a Big Ten Conference opponent.

“It’s all about momentum, and I think that was a big momentum swing,” Gordon said. “We just kind of fed off that.”

Gordon scored twice Saturday, putting his total at 19 for the season after a 51-yard touchdown on the first play of the third quarter gave the Badgers (6-2, 3-1) a 27-0 lead.

UW’s star running back, who finished with 128 yards on 19 carries, hobbled off the field after Sam Arneson’s helmet collided with Gordon’s knee on a deep incomplete pass early in the fourth quarter.

He did not return, but coach Gary Andersen and Gordon each said he could have stayed in had the score been closer.

“He’s fine. He’s ready to go. He has no issues,” Andersen said. “He’ll come back in, it’ll just be against Purdue.”

The play after Gordon left the field, backup Corey Clement broke off a 36-yard touchdown to give the Badgers their final touchdown of the day.

It was Clement’s second touchdown after he scored from 43 yards out to give UW a 14-0 lead with 9 minutes, 36 seconds left in the second quarter. He finished with 131 yards on 14 carries.

It masked a sub-par day at the quarterback position.

Joel Stave completed 7 of 16 passes for 81 yards, while Tanner McEvoy was 1 of 4 for 6 yards and an interception.

The Badgers had no trouble pressuring quarterback Gary Nova, who started after being a game-time decision with a knee injury.

Nova was replaced by redshirt freshman Chris Laviano in the third quarter after a three-and-out that included sacks by Vince Biegel and Marcus Trotter.

“I don’t think we did a great job protecting him, which is why I took him out when I took him out,” Rutgers coach Kyle Flood said. “I would give a lot of credit to Wisconsin’s defense. They’re number one in our conference for a reason. We certainly knew it was going to be a great challenge for us. They certainly played like a number one defense.”

The Badgers have now slaughtered both conference newcomers after last week’s 52-7 win over Maryland, and they would be coming off two straight shutouts if not for the second-team defense allowing a late, meaningless touchdown to the Terrapins.

Saturday was also an emphatic first road victory for UW, which lost at Northwestern and against LSU on a neutral site earlier in the season.

“Winning on the road is tough to do,” UW linebacker Derek Landisch said. “I think we are starting to gain momentum.”

The Badgers are playing their best football heading into the season’s final stretch, where four more wins would give them a spot in the Big Ten Championship game — a feat that looks much more plausible than it did a few weeks ago.

Jason Galloway covers sports for the Wisconsin State Journal. Galloway moved to Madison in 2013 after graduating from the University of Alabama and spending two years as the high school sports reporter for the Opelika-Auburn News in Alabama.

There’s ample evidence that says rebuilding Purdue is one of the most improved football teams in the Big Ten Conference this season.

“There’s no one better as far as being selfless on this team," said Bill Busch, the UW safeties coach. “There’s no one I’ve ever coached that I appreciate more than him, ever."

Bill Busch and Jeff Genyk share the coaching duties while with most teams, the responsibilities fall on one person.

Tom Oates grades the Badgers: UW earns an A-minus for win over Rutgers

The offense isn't jumping on on every opportunity due to misfires in the passing game, but if the defense and special teams play like they did Saturday, it won't matter.

Badgers running back Melvin Gordon scores on a 13-yard run in the first quarter, just three plays after a blocked punt gave UW possession against Rutgers on Saturday at High Point Solutions Stadium in Piscataway, N.J.

Badgers quarterback Tanner McEvoy scrambles for a first down. He finished with 20 yards on five carries. 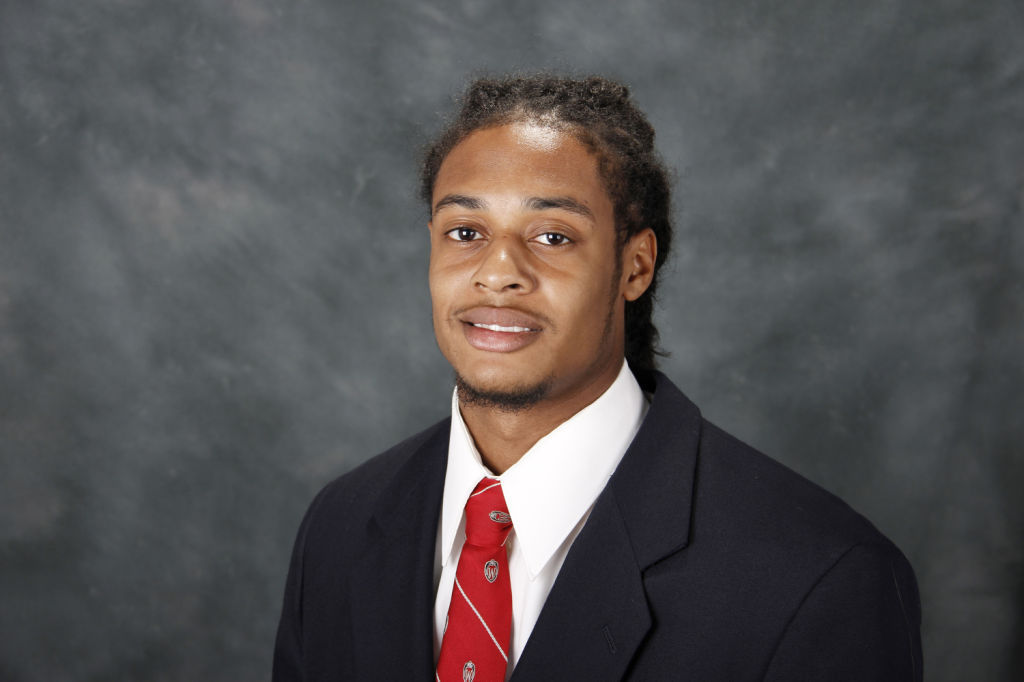