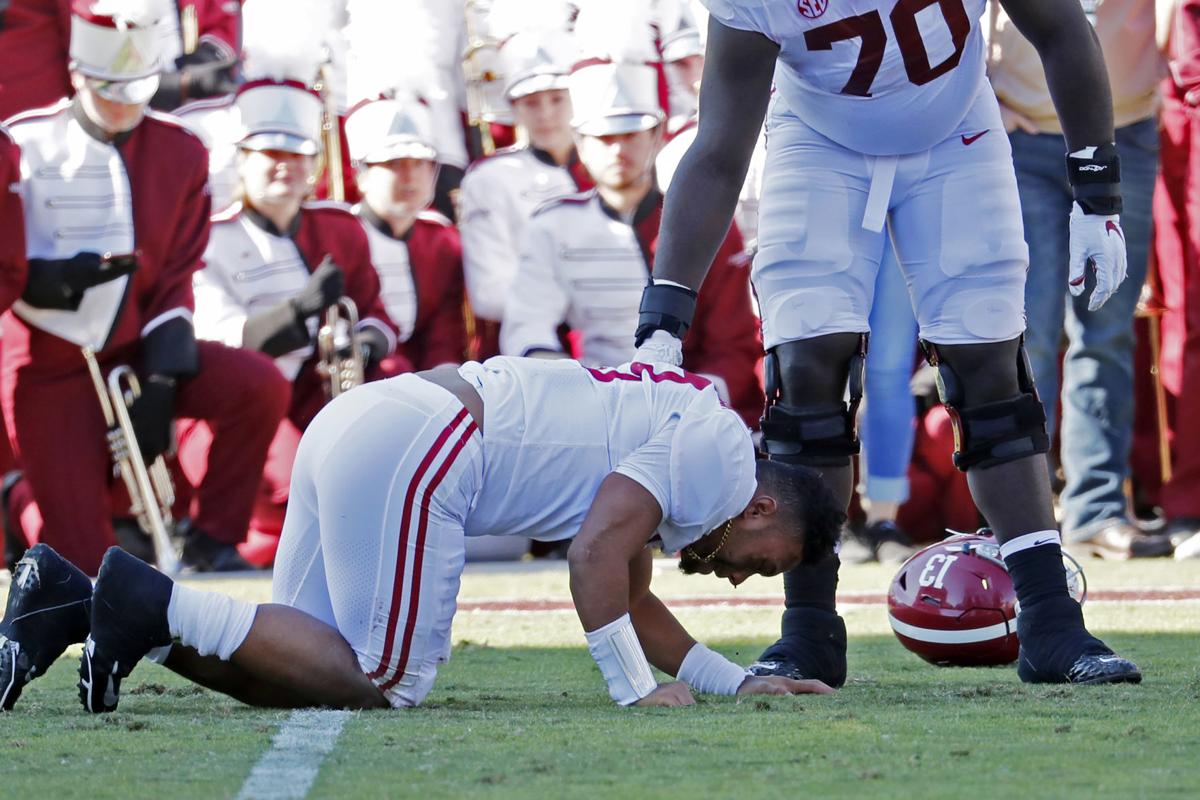 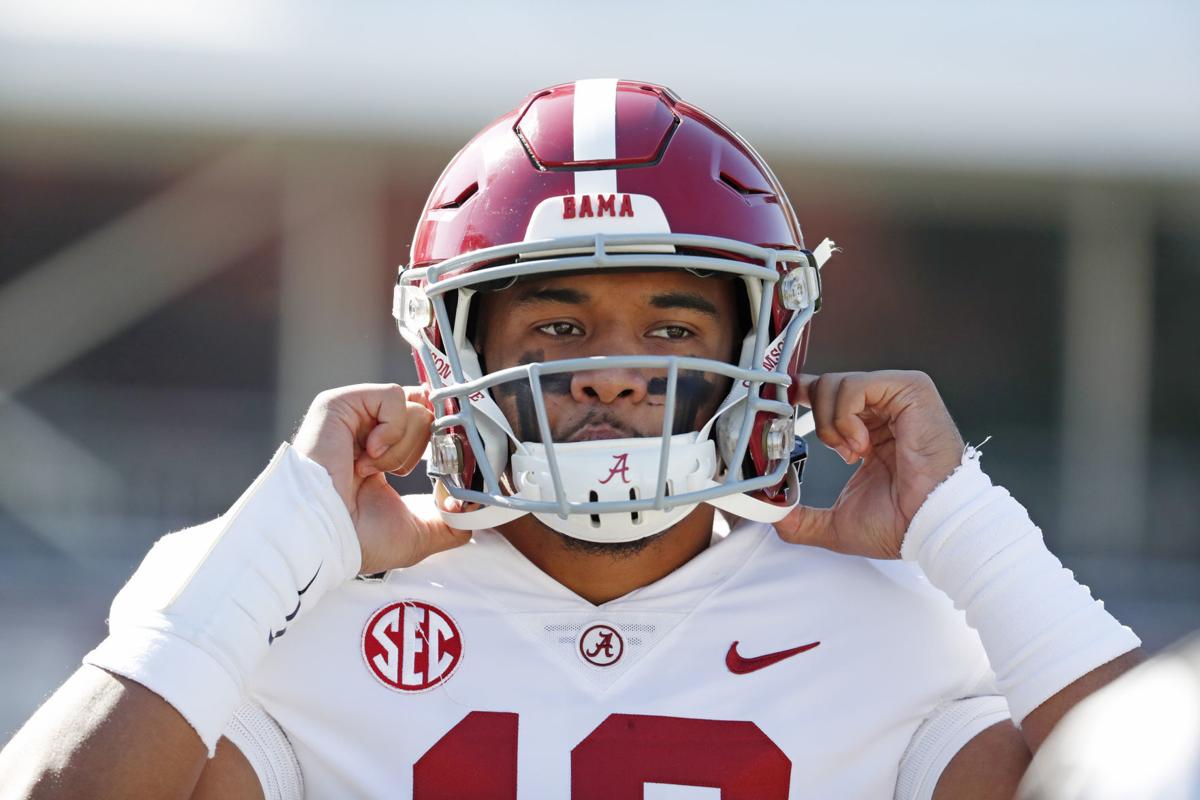 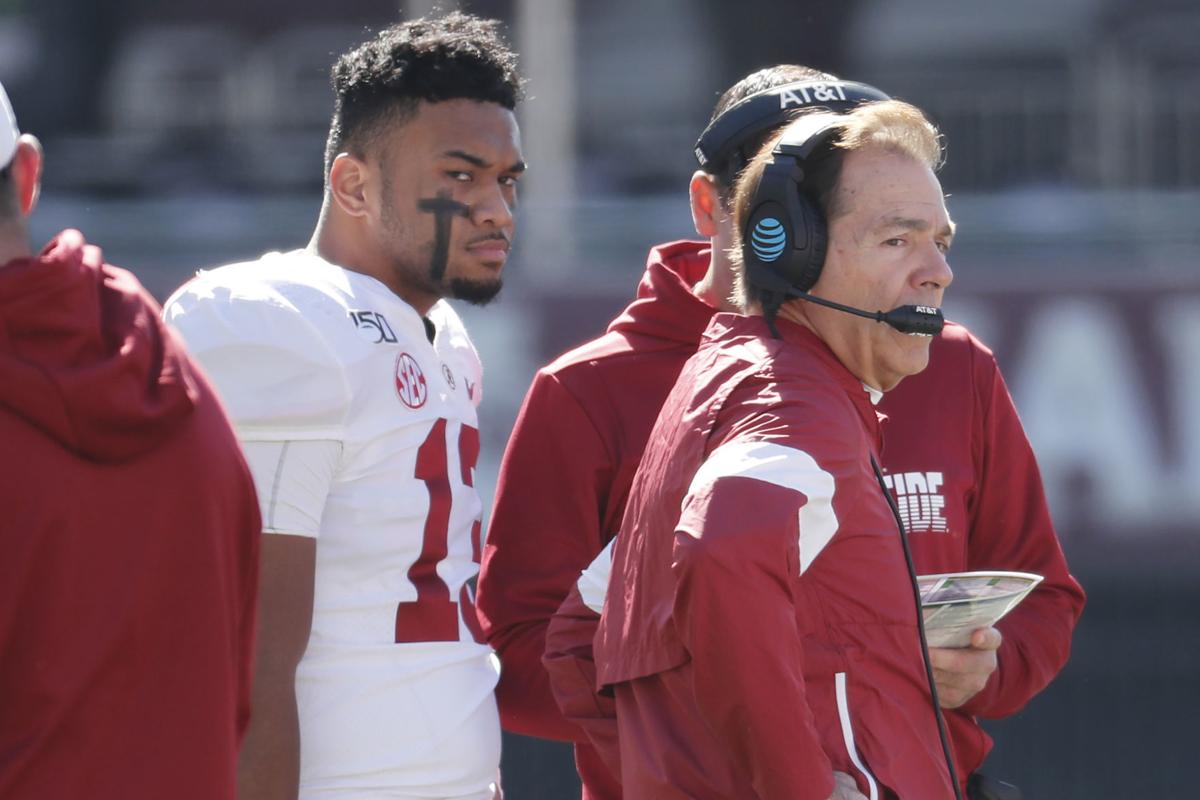 TUSCALOOSA, Ala. — The only foolproof way to avoid being injured playing football is to not play at all.

Alabama star Tua Tagovailoa started Saturday at Mississippi State, a week after he looked gimpy on a surgically repaired ankle but played great against LSU. The junior quarterback seemed done for the day with the Crimson Tide up 28 points late in the first half, but Tagovailoa lobbied for one more series and Tide coach Nick Saban gave it to him.

“We can second-guess ourselves all we want,” Saban said. “We told Mac (Jones) to warm up and we were going to go 2-minute before the half. Tua wanted to play in the game and so I don’t really make a lot of decisions worrying if a guy is going to get hurt.”

That final series ended with Tagovailoa seriously injured. Alabama announced hours after it had beaten Mississippi State 38-7 that Tagovailoa had suffered a dislocated right hip and would miss the remainder of the season.

The quarterback who was a national championship game MVP and Heisman Trophy candidate before he ever started a game at Alabama will probably never take another snap for the Tide. A player who had a real chance of being the first pick in April’s NFL draft is now facing an uncertain future. When a football player gets a hip injury the first name that comes to mind is Bo Jackson, whose career was ended by a dislocated hip in 1990. Hopefully, advancements in medicine will produce a better outcome for Tagovailoa.

In 33 games with Alabama, Tagovailoa has thrown 87 touchdown passes and 11 interceptions.

Some might question why Tagovailoa, a little less than a month after suffering a high ankle sprain, was playing. At that point in the game? Against a team Alabama could have handled without him?

Saban’s comment sums it up: If the player can play (cleared by doctors) and wants to play (with the blessing of his family), he plays. It is a dangerous game. Tagovailoa’s injury is awful for Alabama, college football and for him. He has a multimillion-dollar arm and was about six months away cashing in.

“Every time you step on the football field and put your pads on you’re at risk of being injured every single play,” Leinart said.

It is moments like this when this becomes so obvious: Between NCAA amateurism rules and NFL rules prohibiting players from being drafted until they are three years out of high school, elite football players are being forced into a system that does not properly value or protect them. In a sane world, the NFL would be developing its own players, and paying them in the process.

That’s not the real world, though. There will be an avalanche of hot takes about what happened to Tagovailoa, but that’s just noise from folks who feed the outrage machine for living.

The biggest story in college football on Saturday was a sad one, but only football was to blame.

The Crimson Tide was going to need some help to make the College Football Playoff.

The Tide will beat Western Carolina next week, and then go to No. 13 Auburn, which lost to No. 5 Georgia, to finish the season. An argument can made that beating Auburn with Mac Jones at quarterback could enhance the Tide’s playoff credentials. Think Ohio State beating Wisconsin in the Big Ten title game in 2014 with third-stringer Cardale Jones.

If the SEC is going to get two teams in the College Football Playoff, it will be LSU and Georgia.

AROUND THE COUNTRY: Minnesota and Baylor, the most surprising unbeaten teams in the country, are no longer unbeaten. The 12th-ranked Bears came out of the gates like a Triple Crown winner, jumping out to a 28-3 lead on No. 10 Oklahoma. The Bears ran just 16 plays in the second half as the Sooners pulled off the biggest comeback in school history ... You could see it coming for Minnesota: After a huge victory at home last week, the No. 7 Gophers had their perfect season come to an end at No. 23 Iowa. Kinnick Stadium has been a trap for highly ranked teams in recent years. The Hawkeyes are 5-1 since 2008 against teams ranked in the top seven. As for the Gophers, they still control their path to a first Big Ten championship game appearance. They are at Northwestern next week and then finish the season at home against rival Wisconsin in a game that will likely decide the West Division champ ... Another interesting thing about Minnesota: If it wins out, a tall task indeed, how do you keep the Gophers out of the playoff with victories against Penn State, Wisconsin and Ohio State? ... It’ll be billed as a big game next week in Columbus, Ohio, but it’s hard to see No. 9 Penn State hanging with the Buckeyes after what Indiana was able to get done against that Nittany Lions’ pass defense ... No team deserved to win a close one more than Iowa State. The Cyclones beat Texas on a last-second field goal after losing four games by a total of 11 points, including three by two or fewer. ... Meanwhile, Texas is staring at a seven-win season unless it can win out. ... No. 5 Georgia is the first team to represent the SEC East in three straight conference championship games since Florida’s mid-1990s teams under Steve Spurrier. ... More Clemson carnage: The third-ranked Tigers held a Wake Forest team averaging 35 points and 487 yards to 3 and 105. ... The Pac-12 has eight teams needing one or two victories over the last two weeks of the regular season to become bowl eligible. The most disappointing? Stanford (4-6) needs to beat Cal and Notre Dame to avoid its first season without a bowl game since 2008. Most pleasant surprise? Oregon State (5-5) needs a split against Washington State and Oregon to snap a five-year postseason drought. ... The foundation of Mark Dantonio’s success at Michigan State was a dominant run against Michigan. That’s over now. Nobody at Michigan State is firing Dantonio, but you have to wonder if change is coming or will the 63-year-old Dantonio dig in for another year. It is difficult for successful coaches to step away after a bad season. Only upcoming games against Maryland and Rutgers give the Spartans any chance of becoming bowl eligible.