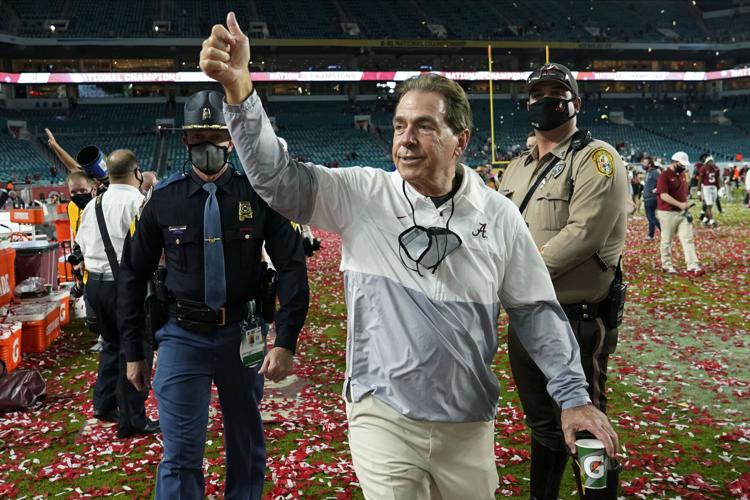 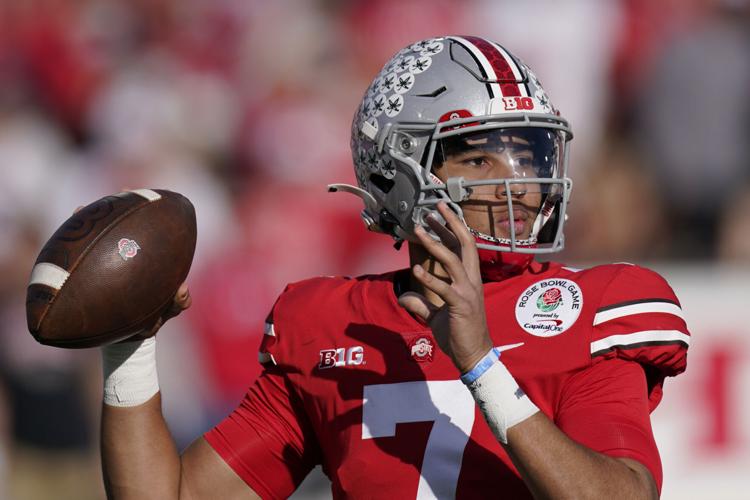 That's not to say your favorite team will fail to live up to the promise that comes with landing a spot in The Associated Press preseason Top 25 college football poll presented by Regions Bank that was released Monday.

But numbers suggest it is best to sprinkle a healthy amount of caution on that optimism as you gear up for the 2022 season.

Lear year was especially volatile for the Top 25, with 14 teams that started the season ranked finishing unranked. From 2010-20, on average, 9.5 teams that appeared in the preseason Top 25 finished unranked — about 38% of the picks. During that time, the most was 12 in 2010.

Time to temper expectations for the preseason Top 25 this season — except for Alabama.

Reality check: The surest bet in sports is the Crimson Tide, which has only missed the playoff once. Alabama has not finished outside the top 10 since 2007, coach Nick Saban's first season. No reason to think it's happening this season.

Reality check: Most of last season's all-time great defense is now in the NFL. The Bulldogs are too talented to take a big step backward, but assuming Alabama-level consistency from any team is a lot to ask.

Reality check: Coming off their first non-ACC championship season in seven years, the Tigers are maybe the most intriguing team in the country. Clemson has two new coordinators and a former five-star quarterback (D.J. Uiagalelei) trying to recover from a puzzlingly poor season. Voters are leaning toward last season being a blip for Dabo Swinney's team and not the start of a trend.

Reality check: The Aggies won the offseason with the No. 1 recruiting class and coach Jimbo Fisher going off on his former boss, Saban. They are also a team relying heavily on sophomores and those five-star freshmen and one with no established starting quarterback or big-play receivers.

Reality check: The Utes are coming off their first Pac-12 title and Rose Bowl appearance, and have enough pieces back to do it again. But repeating a magical season is difficult for the vast majority of programs that don't regularly sign top-10 recruiting classes.

Reality check: The Wolverines broke through for coach Jim Harbaugh with a Big Ten title and victory over Ohio State in 2021. Now, with two new coordinators and a defense replacing three first-round draft picks, a repeat seems unlikely. An experienced offense and accommodating schedule gives Michigan a high floor.

Reality check: New coach (Brent Venables), new quarterback (Dillon Gabriel) and more uncertainty in Norman than there has been in years. The Sooners have been one of the most reliable teams in the country for two decades, finishing unranked only twice. But turnover often comes with volatility.

Reality check: Another one of 2021's surprise breakout teams, the defending Big 12 champions hope to keep it up with strong line play. Still, the Big 12 is all about winning close games and the difference between playing for the title and finishing fourth is thin.

Reality check: Another highly ranked team with a new coach and quarterback. Former Georgia DC Dan Lanning inherits the most talented roster in the Pac-12. Transfer Bo Nix will try to bring stability to the quarterback position, which was not really his thing at Auburn.

Reality check: The Cowboys, a team buoyed by super seniors — especially on defense — in 2022, will need to lean heavily on its experienced offense. QB Spencer Sanders has had a long career filled with peaks and valleys.

Reality check: The Wolfpack enter one of the most highly anticipated seasons for the program in recent history, with a loaded defense and star quarterback in Devin Leary. This is also program that has one double-digit victory season — ever.

Reality check: The star power at USC has not been this bright in a while with coach Lincoln Riley, QB Caleb Williams and WR Jordan Addison providing hope for an immediate turnaround. But the game is still about blocking and tackling and there are plenty of questions about the Trojans' ability to do either well.

Reality check: Coach Mel Tucker parlayed the Spartans' surprising surge last year into an enormous contract and the elevated expectations that go with it. Will regression come for the Spartans in 2022?

Reality check: The U. brought back hometown hero Mario Cristobal to help build the program back to its powerhouse past. He's got a pro prospect in QB Tyler Van Dyke to work with, but this is a lot of optimism for a team that has only finished ranked once in the last four seasons.

Reality check: Coming off an ACC title, the Panthers are hoping USC transfer Kedon Slovis can replicate Kenny Pickett's stellar 2021. He will have to do it without the departed Jordan Addison. Pitt hasn't finished consecutive seasons ranked since 1983.

Reality check: In three of the last four seasons, the Badgers have started the season ranked and finished it unranked. The formula of star running back (Braelon Allen) and staunch defense appears to be in place again, but can QB Graham Mertz finally find his blue-chip form?

Reality check: Life in the SEC West is hard. The Razorbacks were overachievers last year, but things can flip fast. Especially facing a schedule that also includes Cincinnati and No. 25 BYU with a rebuilt defense.

Reality check: Kentucky has found success in bullying teams up front. Turnover on both lines could make that tougher this season, even while QB Will Levis' NFL prospect status rises. The last time the Wildcats finished ranked in consecutive seasons: 1977.

Reality check: After the first 10-win regular season in school history, Ole Miss coach Lane Kiffin dived back into the transfer portal to rebuild his offense with QB Jaxson Dart, RB Zach Evans and OT Mason Brooks. Do the pieces come together again for the Portal King?

Reality check: The Demon Deacons have 13 starters returning from one of the best teams in school history. But as good as Wake was last year, the defense fell apart late and now the Deacs will have to make do for an indefinite stint without QB Sam Hartman.

Reality check: Any remaining doubts about last year's Bearcats were buried on NFL draft night. Cincinnati had nine players selected, including five in the top 100. That's a mountain of difference-makers for any program not named Alabama to replace.

Reality check: The Cougars filled the promise of the Dana Holgorsen hire last year by playing for the American Athletic Conference title and are poised to be this season's G5 King. They also face a tricky early schedule that includes Texas Tech, and have to replace two big-time playmakers in DB Marcus Jones and DL Logan Hall.

Reality check: The Cougars won 10 games with a young team last year, which bodes well for this season. But, oh that schedule. BYU's last season as an independent before joining the Big 12 includes games against No. 10 Baylor, No. 11 Oregon, No. 5 Notre Dame, No. 19 Arkansas, Boise State and Stanford.

Thoughts on a few scuffles, a good day from the Badgers' quarterbacks and running backs, and a key depth piece making progress.

Wisconsin football ranked in first AP poll of the 2022 season

The Badgers were one of four Big Ten teams to be ranked in the preseason poll, and were the only West Division team. Five other conference teams received votes.

An uncommitted 2023 recruit discusses his UW offer and interest in the program, and the offensive coordinator talks quarterbacks for this recruitng cycle.

How Titus Toler found his way back onto Wisconsin football's roster

The Badgers safety missed the 2021 season with an undisclosed injury. He said he is 100% healthy and has participated in fall camp.

The freshmen on the Wisconsin football team have a handful of traditions that they participate in as a welcome to the team. Here’s one that requires them to show off their dance moves.

Red Zone podcast: What to make of the Badgers passing attack and secondary

Colten Bartholomew and Jake Kocorowski break down Paul Chryst's comments on the state of the Badgers passing game, and where the Badgers secondary has been its best during training camp.

The 6-foot-3, 236-pound tight end believes he is back to full strength after suffering a horrific injury last October at Camp Randall Stadium.

Ohio State and Michigan are making the Big Ten look like the Big Two and Little 12, rekindling memories for some of the era of Woody Hayes and Bo Schembechler.

No. 6 Alabama and No. 18 LSU is a big game again after a two-year hiatus. The teams meet Nov. 5 after both have next week off.

In their final games before the first College Football Playoff rankings are released, Georgia, Ohio State and Tennessee made compelling cases to start the race for the national championship at the top.

The chances of having a 1 vs. 2 matchup go up if there are two No. 2s, as there are with Tennessee and Ohio State.

Tennessee is No. 1 in the CFP rankings for the first time, starting ahead of a group of teams that have become regulars at the top of the selection committee's top 25.

Kirby Smart's top-ranked Bulldogs have never looked more like peak Alabama than in handily beating No. 2 Tennessee, which just three weeks ago knocked off the Crimson Tide.

AP Top 25 Reality Check: Notre Dame is back in rankings; Can Wisconsin return as well?

Without a path to the Southeastern Conference championship game, the slim chance 2-loss Alabama had to reach the CFP for the eighth time in its nine-year history is now none.

The Pac-12 is better than it has been in recent years, but is also eating its own and undercutting its best teams' chances to earn a College Football Playoff berth.

With three of the top six teams and only three weeks left until Selection Sunday, the SEC appears well positioned to put two teams in the CFP again.

College Football Playoff contenders lived on the edge in Week 12, with the top four teams all surviving scares and No. 5 Tennessee going down with a thud.

Michigan and Ohio State will meet Saturday as ranked teams for the 48th time, the most of any rivalry. Texas and Oklahoma are next at 42.

Ryan Day is 45-5 at Ohio State as Urban Meyer's replacement, but 1-2 against Michigan after the Wolverines routed the Buckeyes 45-23 on Saturday.

The AP Top 25 got a remake thanks to four top-10 teams losing this past weekend, but there were some interesting results among teams that have played each other.