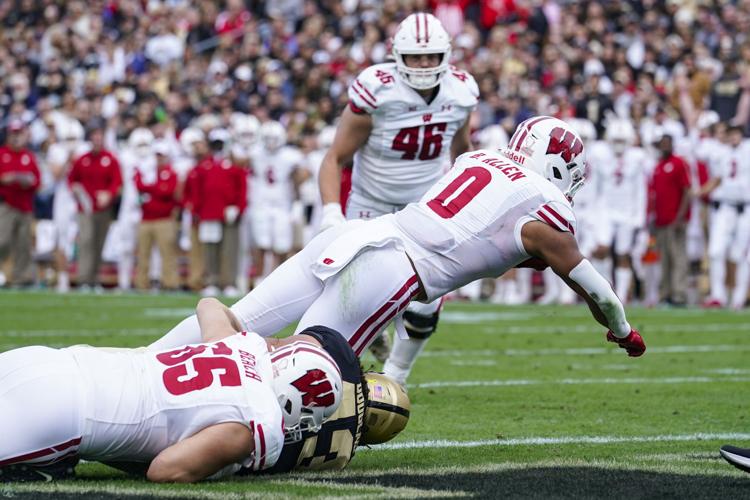 UW freshman running back Braelon Allen dives in for a 4-yard touchdown to open the scoring against No. 25 Purdue on Saturday in West Lafayette, Ind. 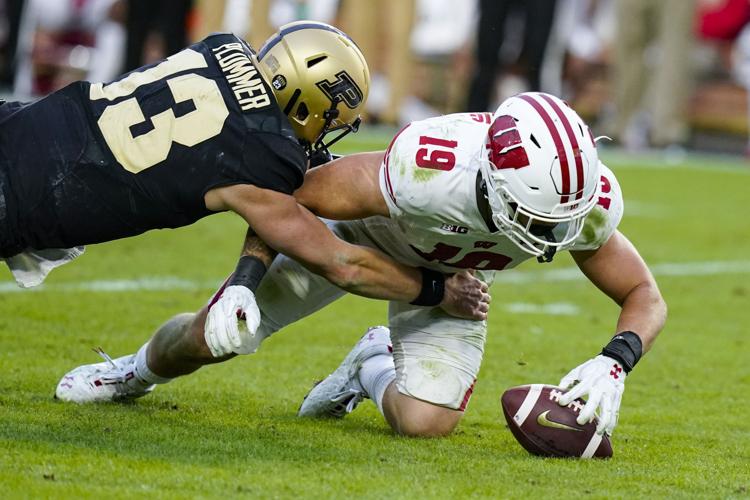 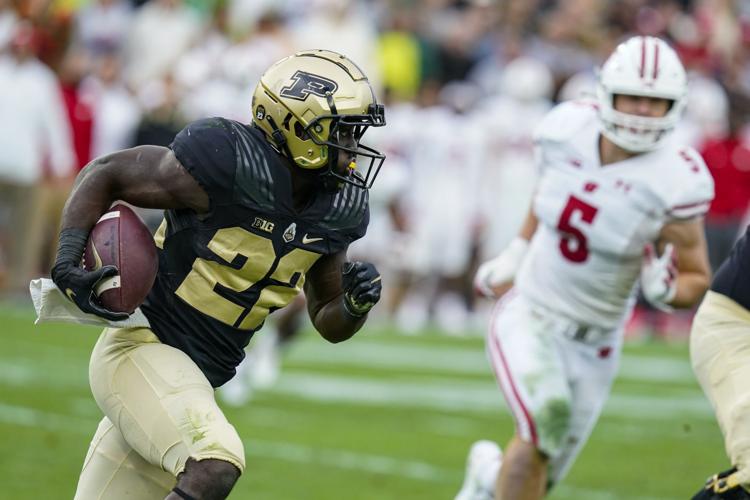 Running back King Doerue led the Boilermakers in carries (9) and yards (20). Purdue was limited to minus-13 rushing yards on 24 attempts.

WEST LAFAYETTE, Indiana — Events unfolding during the University of Wisconsin football team’s game at No. 25 Purdue came as a shock to senior cornerback Faion Hicks.

It wasn’t just that the Boilermakers weren’t throwing the ball to David Bell, their star junior receiver coming off a monster game that spurred their upset of then-No. 2 Iowa. The fact that Purdue wasn’t looking Bell’s way for the majority of the game had Hicks looking for answers.

At one point, he just asked Bell what was up.

Bell was shut down during the Badgers’ 30-13 win at Ross-Ade Stadium on Saturday. He had six catches for 33 yards on 10 targets, his lowest yardage output in nearly two calendar years and more than 100 less than the Big Ten-best 135.8 he averaged coming into the game. Two of Bell’s catches and 14 of his yards came on Purdue’s final drive when it was down three scores. A week prior against Iowa, Bell had 240 yards and a touchdown on 11 catches.

Rapid reaction: What the Badgers' best win of the season means for their Big Ten title game hopes

Credit for the performance against one of the best receivers in the country bounced around the UW defense — the game plan, senior cornerbacks Hicks and Caesar Williams, the safeties, and the pressure created on the quarterback by the front seven all earned praise.

All of these elements came together to take away the Boilermakers’ best big-play threat and hold the second-best passing offense in the Big Ten to 219 yards passing, 115 less than their average.

“(Defensive coordinator Jim Leonhard), our defensive staff puts together a really good plan,” UW coach Paul Chryst said. “That’s a part of it, but the kids understand it. The kids are able to go out and execute it. … To take away a good player, it takes a lot.”

UW’s plan to open the game was to have Hicks follow Bell as much as possible, similar to how it guarded Penn State receiver Jahan Dotson. However, Hicks and Williams each felt most comfortable defending a side of the field, with Hicks on the left and Williams on the right. That allowed both of the experienced players to get chances to lock up Bell and didn’t force UW (4-3, 2-2 Big Ten) to rely too heavily on Hicks.

Both corners stayed close to Bell throughout the game and he wasn’t able to create yards after the catch, one of his best skills as a receiver.

“We just had confidence in ourselves,” said Williams, who had his first interception since 2019 in the second quarter. “We do it each and every week. I don’t think Faion or myself get the credit for what we do week in and week out, but I like to grind in the shadows and let the light come when the light comes.”

The Badgers rolled their coverages toward Bell on early downs. These plays weren’t true double-teams, but Hicks and Williams knew they had safety help to particular areas when they guarded Bell. That allowed them to play aggressively and take away a direction Bell could go, knowing that if he broke toward the safety, it would at the very least be a tight-window throw for the quarterback.

“We put extra guys on him at certain points,” said junior safety John Torchio, who had an interception in the second quarter. “We knew he was going to get his. I think we contained him pretty well.”

UW’s safeties finally made good on interception chances against Purdue (4-3, 2-2), with Torchio and senior Collin Wilder (one interception, one fumble forced and recovered) making Purdue’s quarterbacks hesitate to throw the ball near them.

The Badgers again controlled the run game, holding the Boilermakers to minus-13 yards rushing after adjusting for yards lost on sacks. The performance tied for the second-fewest rushing yards allowed in program history and marked the first time UW has held a Big Ten program to negative rushing yards since 1951. That added more pressure to Purdue quarterback Aidan O’Connell and the passing game — they were the only chance the team had to move the ball.

UW created long third downs for Purdue. The Boilermakers went 3 of 12 on third down with an average of 7.75 yards to gain, and three of their five turnovers came on third downs. Long third downs allowed Leonhard to play man against Bell on the outside and bring pressure, which effectively smothered Aidan O’Connell with six sacks — tying a team-high for a game this season — before he could give Bell a chance to get downfield.

“I thought the corners and the safeties did well, and I don’t want to give us credit but … even us (linebackers), we had to know where (Bell) is and get underneath him,” senior inside linebacker Jack Sanborn said. “It was a collective effort. The DBs were playing aggressive today, and I loved it.”

One of the few negatives to the Badgers’ strategy for defending Bell was it allowed for Purdue tight end Payne Durham to come open underneath often. With the back end of the UW defense keeping their eyes on Bell and the linebackers so involved with the pass rush, Durham was able to tally nine catches for 112 yards and a touchdown.

“Those were types of things … if we deflected a ball with the tight end coming down the middle, great; if we tackle him for 4 yards, it is what it is,” junior linebacker Leo Chenal said.

Shutting down Bell should inject even more confidence into a UW defense that has been dominant for much of the season. Bell was the best receiver left on the Badgers’ regular-season schedule and UW has proven it can take away an opponent’s best option when needed.

“We forced them to throw the ball elsewhere,” Hicks said, “and everybody made plays.”

University of Wisconsin quarterback Graham Mertz, tailback Braelon Allen and cornerback Caesar Williams speak to the media Saturday after the …

The losing streak extended back to 2019, when the then-ranked No. 13 Badgers beat No. 9 Minnesota to close the regular season before losing the Big Ten Championship and Rose Bowl.

It wasn't always pretty, but Wisconsin dominated Purdue in the second half. Here are some key takeaways from a key win in the Big Ten race.

AP Top 25 Takeaways: Cincinnati, Oklahoma win ugly in tussle for No. 2 behind Georgia

5 observations after rewatching the Badgers' win over No. 25 Purdue

Thoughts on Logan Bruss' return at right tackle, the interior offensive line play for the Badgers and some credit for a clutch special teams performer.

AP Top 25 Reality Check: Badgers among the teams in position to get back into rankings

There are currently 13 unranked teams that started the season ranked, including Wisconsin, which started at preseason No. 12.

How staying in the moment has become the Badgers' mantra

One of Paul Chryst's favorite saying is, "Be where your feet are." The Badgers have embraced that mentality while winning three consecutive games.

Kayden Lyles hadn't played in the past two Badgers games after Joe Tippmann beat him out for the center position in training camp.

The best player on the Iowa football team’s offense touches the ball every play, but doesn’t have a passing, rushing or receiving yard to show for it. The Badgers can't allow Tyler Linderbaum to take their best defenders out of plays.

Iowa's 24-7 loss to Purdue and Wisconsin's 30-13 win over Purdue the last two Saturdays doesn't mean the Badgers will rout the Hawkeyes on Saturday.

Whether you are heading down to Camp Randall or watching from the comfort of your couch, the State Journal has Badgers fans covered with a complete breakdown of everything they need to know as Wisconsin takes on the 9th-ranked Iowa Hawkeyes on Saturday in Madison.

Colin Kaepernick secures Raiders workout after 5 years out of NFL

UW freshman running back Braelon Allen dives in for a 4-yard touchdown to open the scoring against No. 25 Purdue on Saturday in West Lafayette, Ind.

Running back King Doerue led the Boilermakers in carries (9) and yards (20). Purdue was limited to minus-13 rushing yards on 24 attempts.