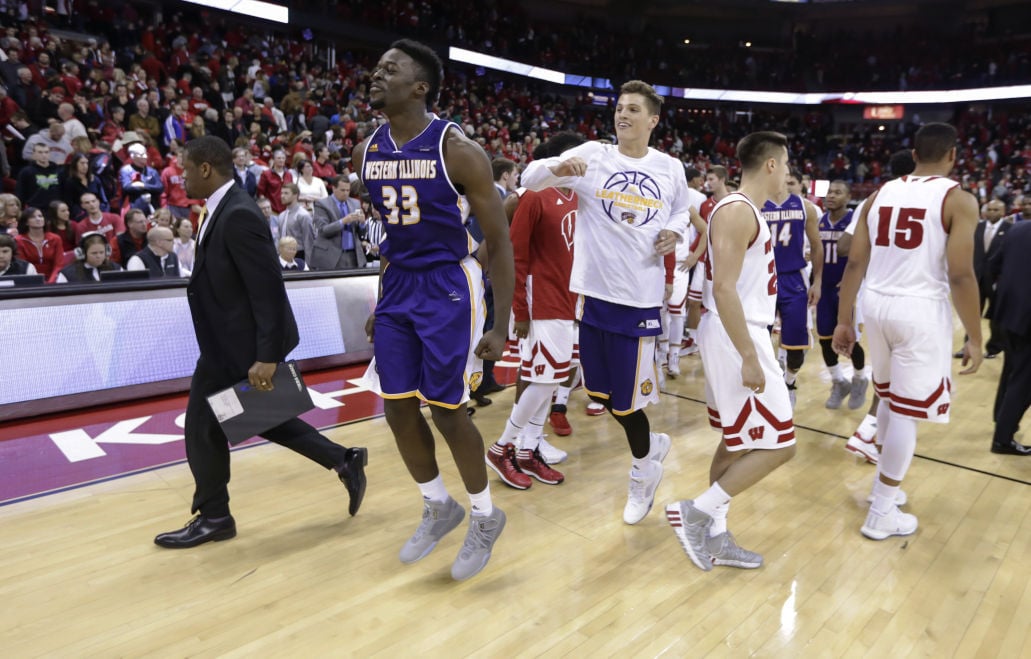 Jalen Chapman (33) and his Western Illinois teammates celebrate Friday night after defeating UW at the Kohl Center, handing the Badgers their first loss in a season opener since the 2001-02 season. 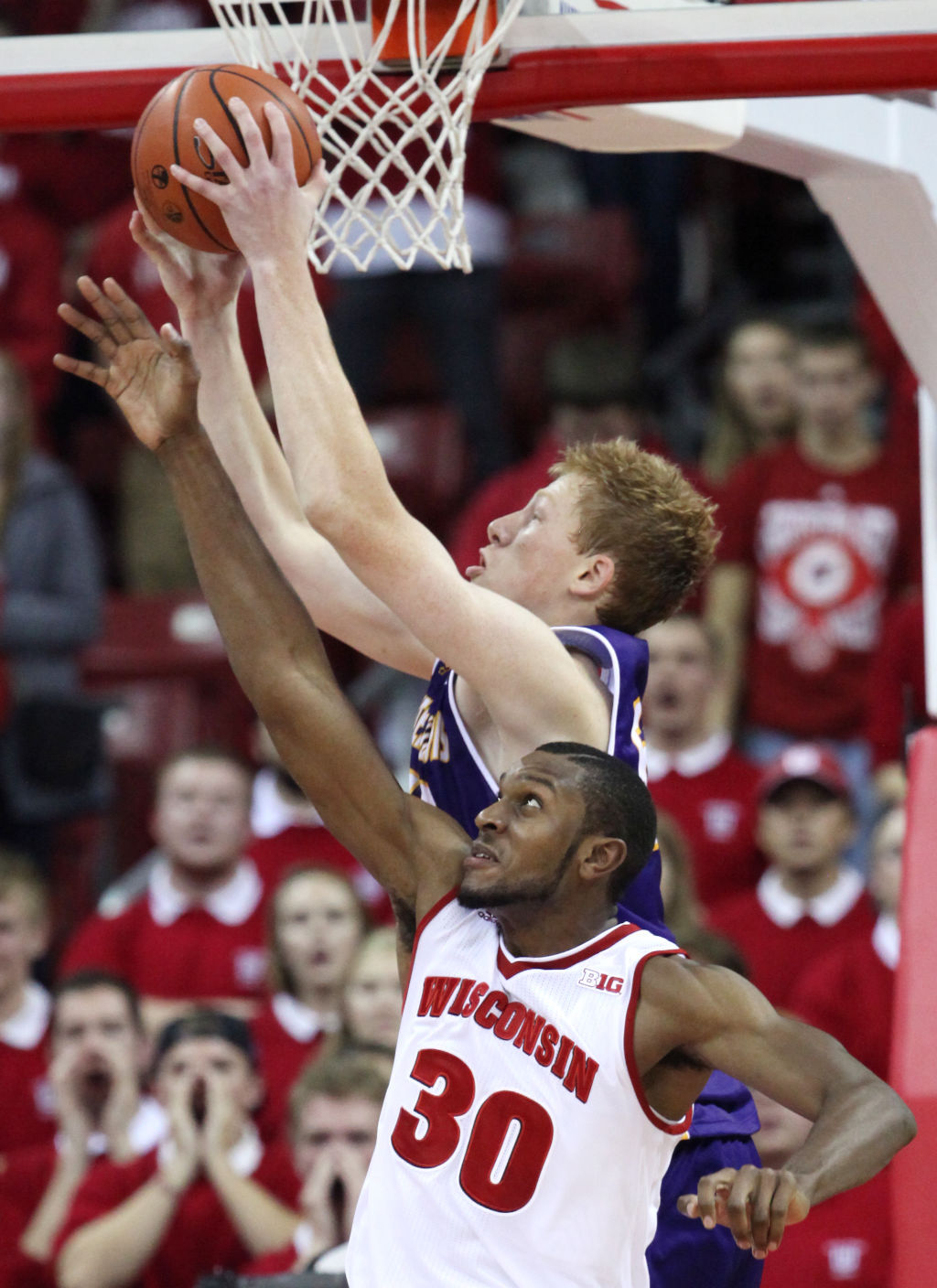 Western Illinois’ Brandon Gilbeck, a former River Valley athlete, goes up over UW’s Vitto Brown during the second half. 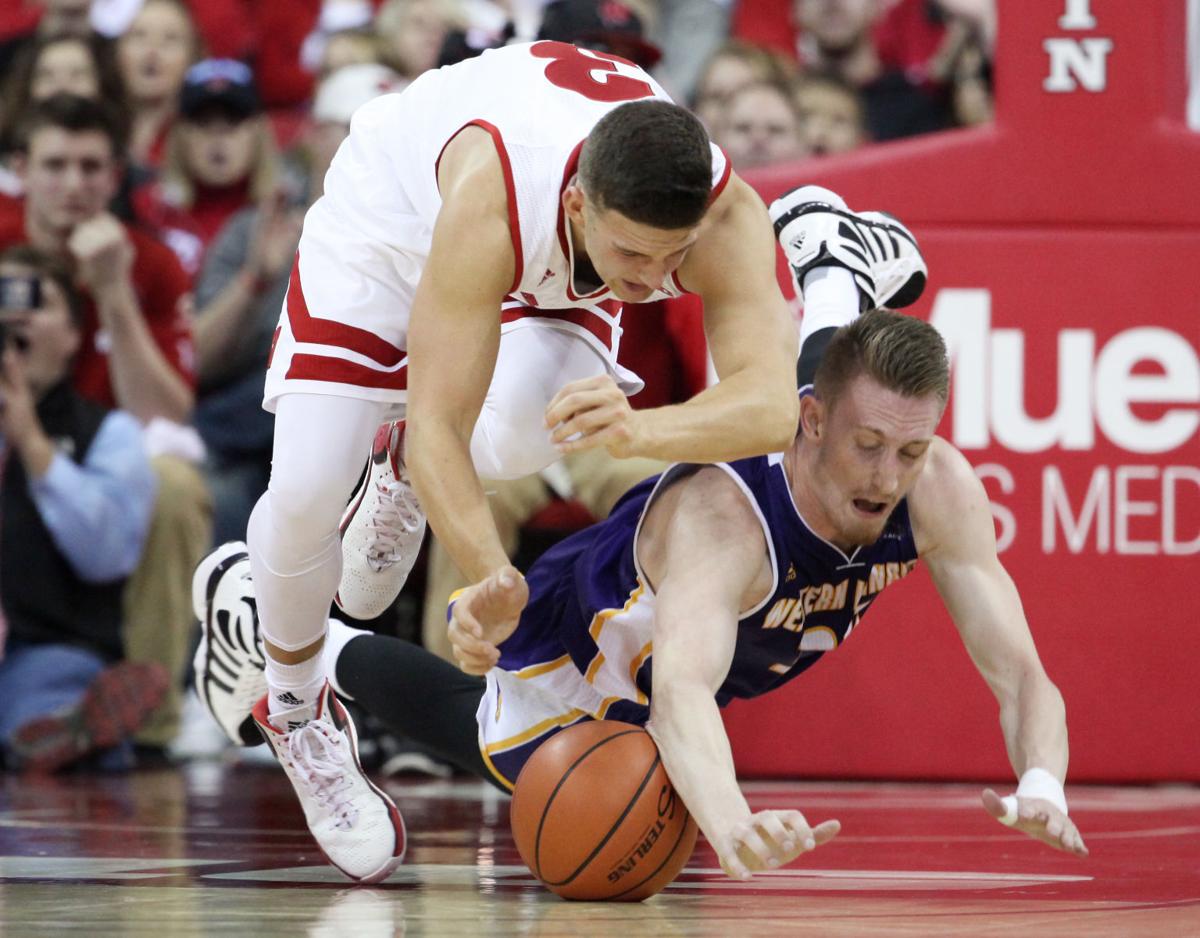 UW’s Zak Showalter, left, and Western Illinois’ Tate Stensgaard dive for a loose basketball during the first half.

On the eve of his team’s official start to the 2015-16 season, University of Wisconsin men’s basketball coach Bo Ryan was asked if he was satisfied where the Badgers stood heading into the opener.

Ready or not, the calendar said it was time for the Badgers to start the season. As it turned out, UW still could have used a few more weeks of practice.

The shocking result on the scoreboard on what began as a joyous night at the Kohl Center on Friday: Western Illinois 69, No. 17 Badgers 67.

Leathernecks senior guard J.C. Fuller went 4 of 4 from 3-point range and scored 20 points to lead all scorers. Covington scored 14 of his 16 points after halftime to help Western IllinoiS which was picked to finish last in the Summit League this season, overcome a seven-point halftime deficit.

The Leathernecks shot 54.0 percent overall and 7 of 9 from beyond the arc. They scored 30 points in the paint, outscoring UW by 10 in that area.

“It’s not a surprise to me,” Ryan said of UW’s struggles on the defensive end. “It’s just I thought offensively we would be a little better and we could handle not being very good defensively at this point.”

UW was very efficient on offense while building a 44-37 halftime lead. But the Badgers shot 25.0 percent from the field in the second half and missed four consecutive free throws during one stretch.

“When you get there, you’ve got to shoot in the 70s at least,” Ryan said after his team shot 64.0 percent from the line overall. “And in a two-point game, how huge do all of those (misses) look? They look pretty big.”

Junior guard Bronson Koenig finished with 17 points, including 12 of UW’s 23 in the second half. Junior forward Nigel Hayes also had 17 points, but he was held scoreless after halftime.

Western Illinois coach Billy Wright said his team used a spy on Hayes in the second half and did a better job of making him shoot over defenders.

But Hayes said he was mostly to blame for being shut out in the second half.

“Part of that was I had open jump shots, so it’s on me to knock them down and make them,” said Hayes, the leading returning scorer for the Badgers. “Being able to attack the rim, if they’re going to play off to prevent that, then I have to make that shot. So the shots I took, I’m fine with. I just have to make them next time.”

UW held a Final Four banner raising ceremony prior to tipoff that included a video tribute with taped messages from Frank Kaminsky and Sam Dekker.

But Kaminsky and Dekker, the two biggest stars on a team that won 36 games before falling to Duke in the NCAA tournament title game, weren’t around to help the Badgers once the game tipped off. Neither were three other key players from that remarkable team: Josh Gasser, Duje Dukan and Traevon Jackson.

The Badgers missed 20 of their first 24 shots from the field in the second half and found themselves trailing 64-56 with less than 5 minutes remaining.

Junior forward Vitto Brown and Koenig combined for all of UW’s points during a 11-3 run that tied the game at 67 with 2 minutes left, but the Badgers were held scoreless the rest of the way.

Covington was fouled by UW freshman guard Khalil Iverson on the perimeter with 10.2 seconds left and made both free throws. Koenig had a chance to tie the game in the closing seconds but missed a jumper.

Afterward, Wright was remarkably calm while answering questions about the Leathernecks’ shocking upset.

“Obviously, I’m thrilled for our program,” said Wright, whose team was 0-14 away from home during his first season at Western Illinois. “I shed a few tears of joy. I think it’s something that can help us move forward.”“My first road win, someone pointed that out. With all we went through last year as a program, those kids did not give up, they didn’t quit.”

Tom Oates: Bo Ryan's Badgers have a lot of work to do

Western Illinois’ shocking 69-67 victory won’t doom UW to a disappointing season, but it did show everyone that it’ll take awhile for the Badgers to get up to speed after their heavy roster turnover.

PLAYER OF THE GAME

Badgers men's basketball: A look at the NCAA rules changes for the 2015-16 season

A closer look at the NCAA rules changes in men's basketball for the 2015-16 season.

Recapping Wisconsin's win over Siena on Sunday after a shocking loss to Western Illinois on Friday.

Jalen Chapman (33) and his Western Illinois teammates celebrate Friday night after defeating UW at the Kohl Center, handing the Badgers their first loss in a season opener since the 2001-02 season.

Western Illinois’ Brandon Gilbeck, a former River Valley athlete, goes up over UW’s Vitto Brown during the second half.

UW’s Zak Showalter, left, and Western Illinois’ Tate Stensgaard dive for a loose basketball during the first half.