Democrats swing behind bipartisan virus aid bill; Biden calls it 'down payment' ahead of inauguration

NBA targeting Dec. 22 as start to coming season
0 comments
Share this
{{featured_button_text}}
1 of 2 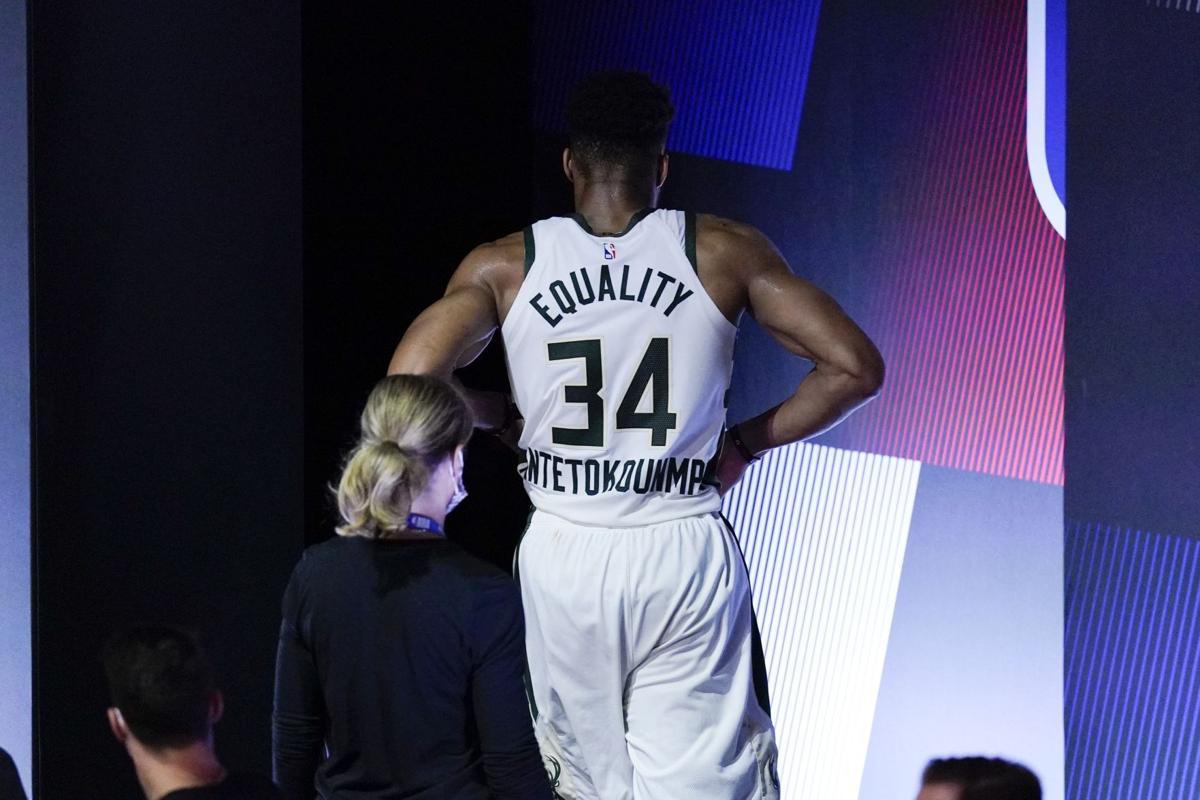 Milwaukee Bucks' Giannis Antetokounmpo leaves the court after hurting his ankle during the first half of a conference semifinal playoff basketball game against the Miami Heat on Sunday, Sept. 6, 2020, in Lake Buena Vista, Florida. 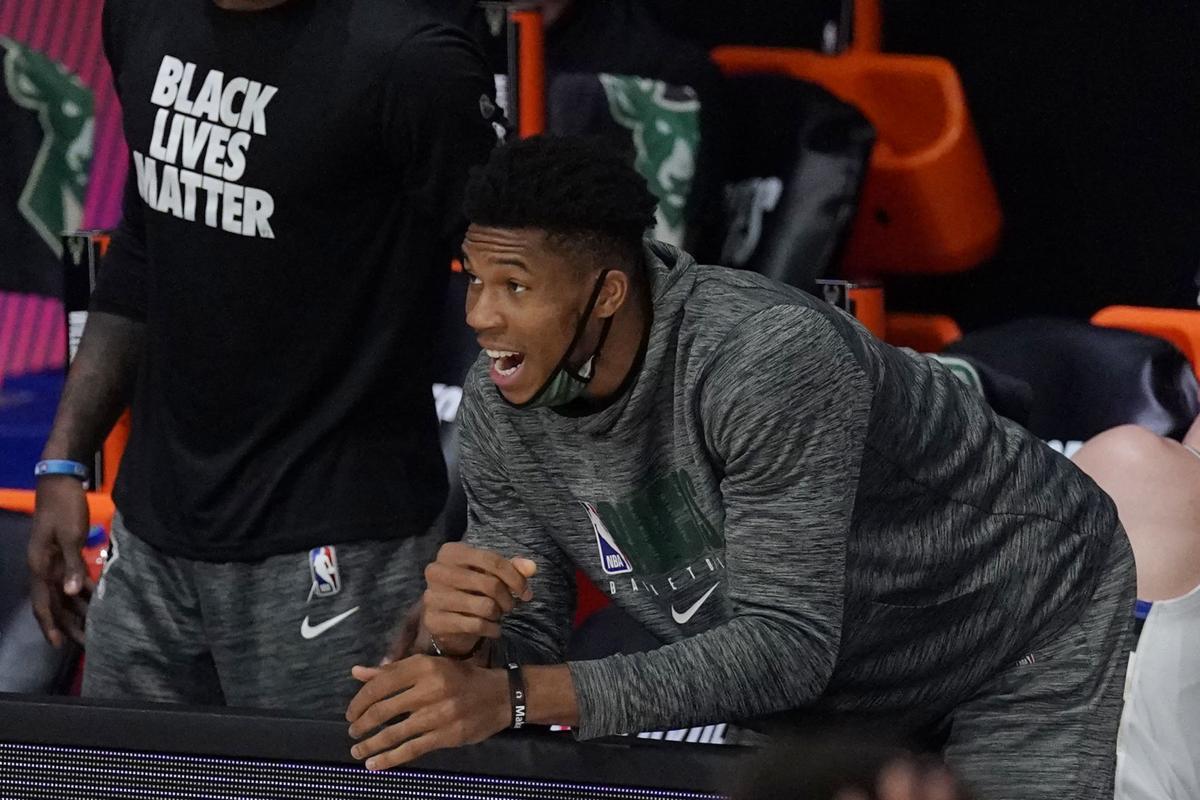 Milwaukee's Giannis Antetokounmpo, who was out with an injured ankle, shouts from the bench in the first half of Game 5 of the Eastern Conference semifinals against Miami on Tuesday, Sept. 8, 2020 in Lake Buena Vista, Florida. The Heat eliminated the Bucks with a 103-94 win.

The NBA may be back before Christmas and fans could return to games at some point next season, if one plan considered by the league's board of governors becomes reality.

The board is targeting a Dec. 22 start to what would be a season of 70 to 72 games, with the NBA Finals ending in June again as has been in the case for many years, according to a person with knowledge of the situation. The person, who spoke to The Associated Press Friday on condition of anonymity because no plan has been finalized, said the possibility of fans being at games would hinge on how a particular market is faring against the coronavirus at that time.

There are other options, such as waiting until later in the season to begin play with the hope that more arenas would be able to have fans. But starting in December instead of mid-January or later could generate a difference of roughly $500 million in revenue, the person said.

Revenue projections for the league this season were missed by about $1.5 billion, the person said. The losses were the result of a combination of factors — the shutdown caused by the pandemic, the cancelation of 171 regular-season games, completing the season in a bubble at Walt Disney World without fans, the nearly $200 million price tag for operating that bubble and a yearlong rift with the Chinese government that saw NBA games not shown on state television there.

No decisions have been finalized on next season and talks with the National Basketball Players Association remain ongoing on many matters, including the financial parameters for the coming year. Those talks, especially on the money issue, would have to be concluded before any real decisions about next season are made.

The NBPA has not made any final decisions on how it wants to see the league proceed, either. But this plan, starting in December and ending in June, would get the 2021-22 season — virus-permitting — back to normal, with 82-game slates starting in October.

A pre-Christmas start for the upcoming season would mean the offseason for the NBA champion Los Angeles Lakers and Eastern Conference champion Miami Heat would be almost absurdly short, since a Dec. 22 start date would mean teams would likely be starting training camps around the end of November. This season’s NBA Finals ended on Oct. 11, so the Heat and Lakers could basically have as little as seven weeks off.

It would also mean that the league, and its broadcast partners, would get to keep Christmas games on the schedule. The league has made Christmas a five-game slate in recent years, primarily because of how many viewers tune in on the holiday.

Typically, a mid-June end to the finals is followed by about a 3 1/2-month break before the following training camp. But a June ending of next season would also allow players to compete in next summer's rescheduled Tokyo Olympics, which are set to begin in July.

The U.S. has already qualified for those Olympics, as have seven other nations. There are 24 teams left to compete for the final four spots in the men's basketball field for the Tokyo Games, with those qualifiers set to begin in June. If the NBA season goes into July or longer, it would seriously jeopardize plans to have many of the league's players taking part in the Olympics.

Still, any December resumption of play would necessitate a serious time crunch to get rosters settled. The NBA draft is scheduled for Nov. 18 and it remains unclear when free agency — which typically follows the draft — would take place.

“It would be nice to have all of the numbers and everything in a tiny little binder, you know, but because of the pandemic and the delay in the season, this is where we are now," Miami Heat President Pat Riley said Friday, speaking at his annual end-of-season availability with reporters. “I think the NBA and the Players Association are going to try to get that together."

There were 171 games canceled this season by the coronavirus, which caused the league to suspend operations on March 11. The league sent 22 of its 30 teams to a bubble at Walt Disney World in July, with play resuming July 30 and the full 16-team playoffs going on as scheduled — though all without fans.

The NBA Players Association voted Thursday to support the notion of starting this coming season on Dec. 22, the date that the league has been targeting for a planned 72-game season.

Milwaukee Bucks' Giannis Antetokounmpo leaves the court after hurting his ankle during the first half of a conference semifinal playoff basketball game against the Miami Heat on Sunday, Sept. 6, 2020, in Lake Buena Vista, Florida.

Milwaukee's Giannis Antetokounmpo, who was out with an injured ankle, shouts from the bench in the first half of Game 5 of the Eastern Conference semifinals against Miami on Tuesday, Sept. 8, 2020 in Lake Buena Vista, Florida. The Heat eliminated the Bucks with a 103-94 win.