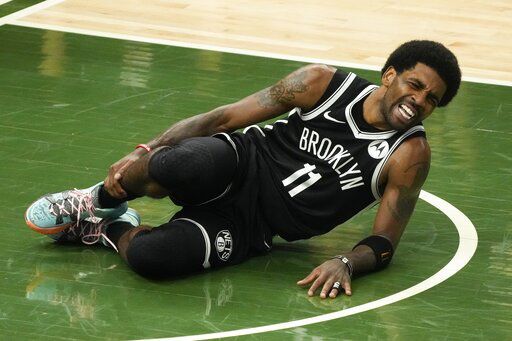 Brooklyn's Kyrie Irving holds his leg after injuring his ankle during the first half of Game 4 of the NBA Eastern Conference semifinals in Milwaukee on Sunday, June 13, 2021. The Bucks beat the Nets 107-96 to even the series 2-2. 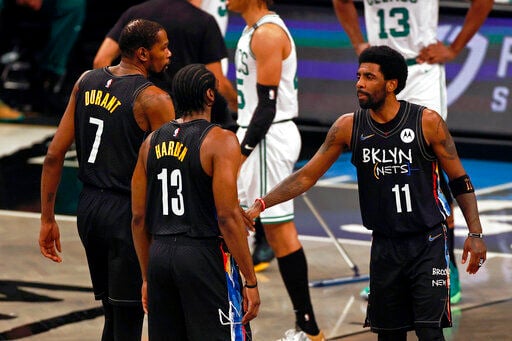 Brooklyn Nets guard James Harden, Kyrie Irving (11) and forward Kevin Durant react after a basket against the Boston Celtics in the first half of Game 5 during a first-round playoff series on Tuesday, June 1, 2021, in New York.

NEW YORK — As "Bucks in six!" chants erupted at the Fiserv Forum, the Nets emptied their bench, and the Bucks connected on a late-game alley-oop from Jrue Holiday to Giannis Antetokounmpo that blew the roof off the arena.

The Nets face an uphill battle to realize their championship dreams in a season mired by the injuries that have been on the table since well before the season began.

Here's what the Nets have going for them after their Game 4 107-96 loss to the Bucks, a defeat that tied their second-round playoff series at two games apiece.

That, however, is where the list of pros ends and the elder's scroll of hurdles the Nets face begins.

Durant is the best player on the floor, but after injuries to the Nets' star guards, the Bucks employ the next five in Giannis Antetokounmpo, Khris Middleton, Jrue Holiday, Brook Lopez and P.J. Tucker.

While Kyrie Irving definitely is out for Game 5 on Tuesday, James Harden on Tuesday was upgraded to doubtful, instead of being ruled out.

It's an unenviable task, no matter how many home games they have left this series. In the blink of an eye, the Nets have devolved from juggernauts into jugger-nots. Their Big 3 is now a Big 1 with two possibles that became outs for Game 5, the Nets announced later on Monday.

"I have no idea what is going to happen with Ky in the coming days," said Nets head coach Steve Nash postgame Sunday. "We will cross our fingers and hope that it is better than I don't know — better than what? — better than missing the next game?"

Irving was "in a walking boot and using crutches," and X-rays were negative according to ESPN.

This reality was always on the table. Irving's checkered injury history reared its head before he ever took the floor, sustaining an orbital fracture in his first Nets training camp that cost him all of camp and most of his first preseason. His first season in Brooklyn was cut short due to a nagging shoulder injury, with a knee injury in Washington serving as the icing on the cake. His injury history dates back to his lone year at Duke, where he only appeared in 11 games before a season-ending toe injury.

The talent and production was never in question. Irving's availability has always been the lone variable in his career, a career with only three seasons of 70 or more games played.

"I hate to see anybody go down. It really sucked. The timing was a little rough," said veteran forward Jeff Green, fresh off his return from a strained plantar fascia. "We have to find a way to get momentum somewhere and to get out there on the floor and communicate and play together. Whoever is in, whatever body is in. That's what we needed to do, but we didn't get the job done."

When one star goes down, the other two have to pick up the slack. That workload caught up to Harden, who shouldered the load while both Irving and Durant missed games earlier this season, and succumbed to a strained hamstring, his first real injury ever. If the Nets rush Harden back — and history would suggest that he wants to play — they run the risk of re-injury, a loss on top of another loss.

And with both Irving and Harden out, the workload intensifies for Durant, whose Achilles tendon alone is worth nine figures. History has already been kind to Durant, who has emerged from the ashes of the operating table one of the best players to ever recover from the dreaded Achilles tear. But he was never supposed to be the only star on the floor, especially not in must-win playoff games.

"It is tricky with Kevin. We all have to pitch in, we all got to play together, we have to move the ball. And I thought tonight, we got a little single-minded looking for Kevin every time." Nash said postgame. "(It) puts a little bit too much pressure on him and it makes us a little predictable, I thought, which puts a lot of burden on him."

This is the Nets' living, breathing nightmare.

They took the gamble on Durant and Irving, as any smart team would have. This is the other side of that risk, the side you don't think about when the Nets drop a 40-piece on an opponent without their third star.

The Nets are down bad. And it's unclear if they'll recover in time.

Irving's right ankle sprain briefly sucked the life out of Milwaukee's Fiserv Forum as rowdy fans realized a man was in clear pain, writhing on the floor in need of assistance before he limped to the locker room without help. It was the embodiment of all that could go wrong when you invest in oft-injured bodies.

In a way, it's business as usual for a Nets team that hasn't been healthy all season. The Nets were 3-0 in games Durant played without Irving or Harden after the midseason trade. Those wins came against the Knicks, Timberwolves and Pacers, none of whom stack up against a Bucks team that has seized control of this series thanks to the Nets' injury misfortunes.

"The message is keep our heads up. Now it's a three-game series," Nash said postgame. "We've got to get home and rest up, get our mind and bodies right and study the film and try to put out our best performance on Tuesday. It's simple. Stay positive. We've had an adverse season, a lot of things have happened, we remained positive and that's what got us through the season so we have to have that same mentality here and find a way to solve some puzzles and preserve."

Brooklyn never had its three stars together against Milwaukee. Irving missed the Nets' 125-123 home victory on Jan. 18 in their second game after acquiring Harden from Houston. Durant and Harden (above), who have combined for two MVP awards and seven scoring titles, put up 64 points that night.

THE SHOW GOES ON

The Bucks have already lost starting guard Donte DiVincenzo (above) for the playoffs after he tore a ligament in his left ankle during Game 3. But Nash said versatile forward Jeff Green is improving from a left foot injury that sidelined him the final three games of the first round.

"We've said it since the injury happened, we've got to move forward, we've got to step up," Bucks coach Mike Budenholzer said Friday. "Everybody's just got to continue to be themselves; execute, defend and compete, which is a lot of things Donte does well."

Bucks center Brook Lopez (above) will be back in Barclays Center, having played for the Nets in Brooklyn and New Jersey. He scored the most points in franchise history.

“I think I’m excited to go back and play in Brooklyn, play on that court again in Barclays, but obviously we’re going to be pretty focused once tipoff comes,” he said.

Bryn Forbes (above) averaged 18.3 points and shot 16 of 30 from 3-point range during the final three games of the Bucks’ first-round sweep of Miami. He was a combined 7 of 12 from beyond the arc in the Bucks' two-game sweep of the Nets in May.

BUCKS ON THE BOARDS

Milwaukee had a double-digit rebounding edge in each game against Miami and dominated the glass by a margin of 16.8 boards per game. The Bucks' size advantage may make Nash consider reinserting former starting center DeAndre Jordan (above) into the rotation.

Brooklyn's Kyrie Irving holds his leg after injuring his ankle during the first half of Game 4 of the NBA Eastern Conference semifinals in Milwaukee on Sunday, June 13, 2021. The Bucks beat the Nets 107-96 to even the series 2-2.

Brooklyn Nets guard James Harden, Kyrie Irving (11) and forward Kevin Durant react after a basket against the Boston Celtics in the first half of Game 5 during a first-round playoff series on Tuesday, June 1, 2021, in New York.