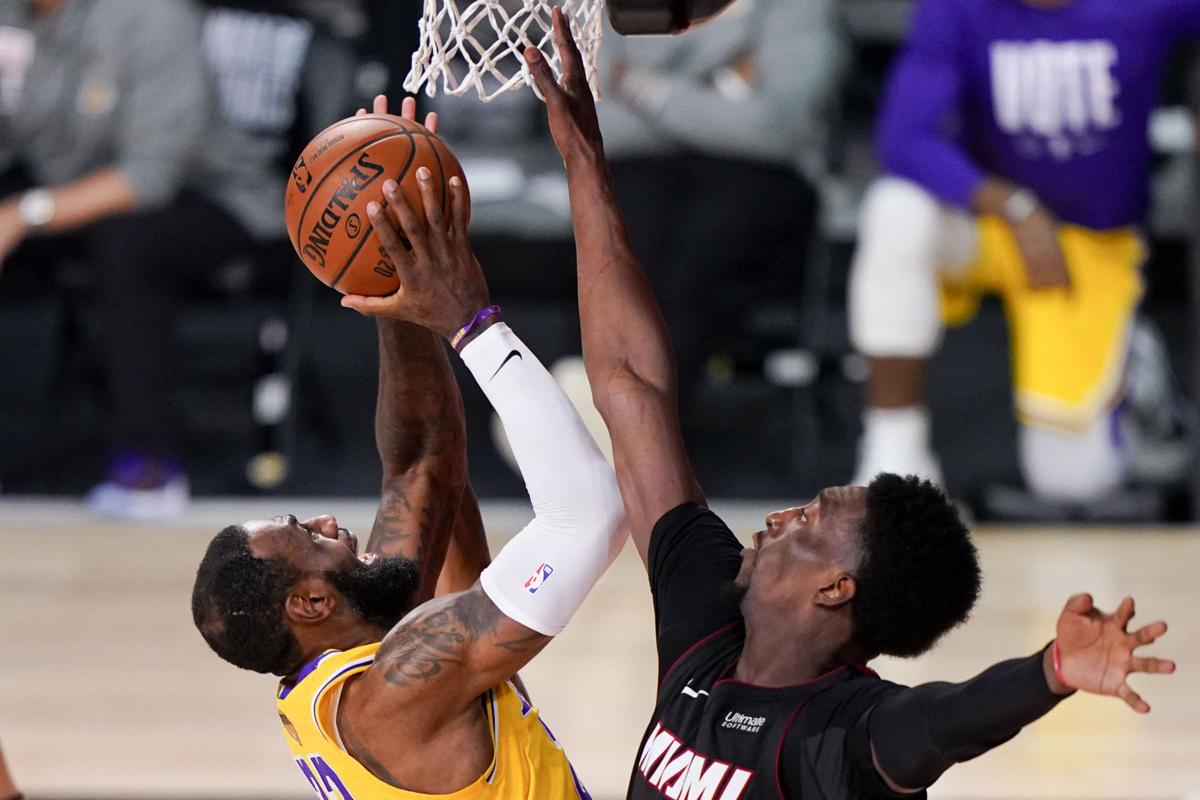 Lakers' LeBron James drives against Heat's Bam Adebayo during the first half Tuesday night. James made 8 of 16 shot attempts and finished with 28 points, 12 rebounds and eight assists. 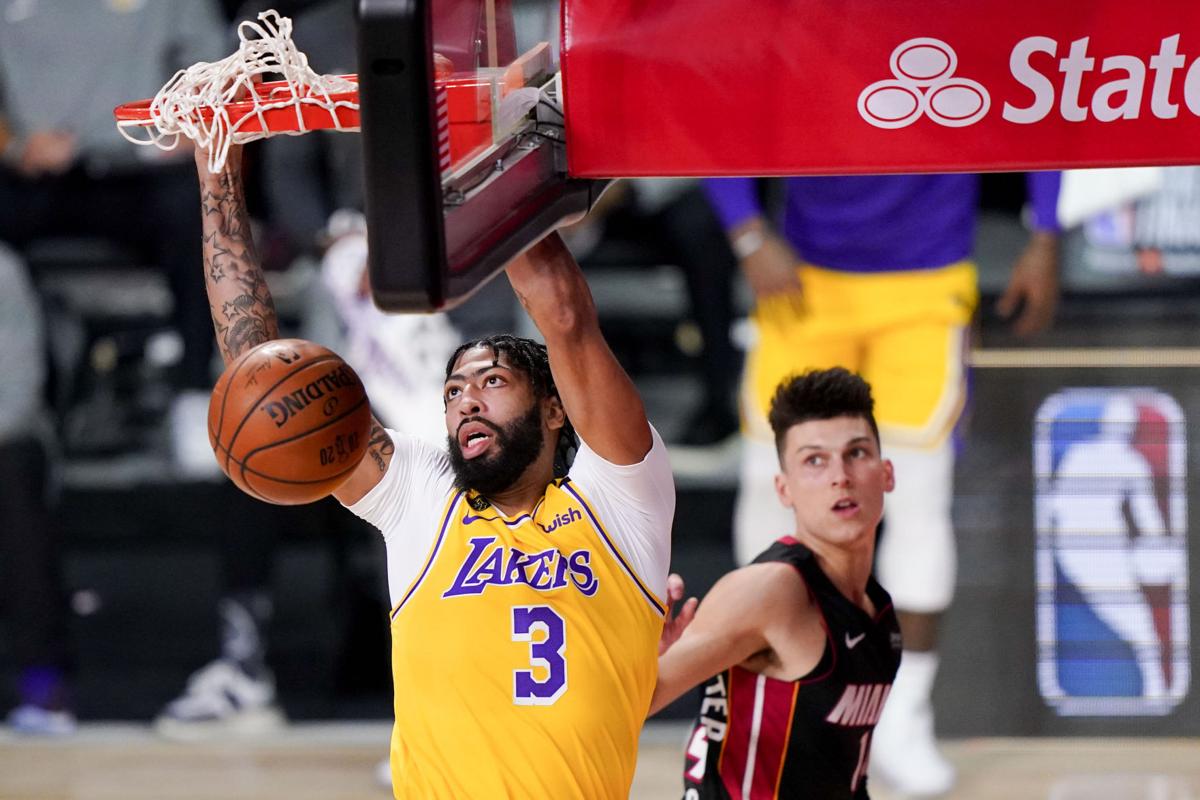 Lakers' Anthony Davis scores as Heat guard Tyler Herro looks on during the first half. Davis finished with 22 points and nine rebounds.

LAKE BUENA VISTA, Fla. — LeBron James woke up from his gameday nap Tuesday and decided it was time to send his Los Angeles Lakers teammates a message.

He grabbed his phone and told the Lakers they were facing a must-win game.

“I felt that vibe. I felt that pressure,” James said. “I felt like, for me personally, this was one of the biggest games of my career.”

James and the Lakers are back in control of these NBA Finals, one win away from the franchise’s 17th championship. James finished with 28 points, 12 rebounds and eight assists, Anthony Davis’ 3-pointer with 39.5 seconds left finally settled matters and the Lakers beat the Miami Heat 102-96 in Game 4.

The Lakers lead 3-1 and can win the title when the series resumes Friday.

“Big-time play. Big-time moment,” James said of Davis’ 3-pointer. “Not only for A.D., but for our ballclub and for our franchise.”

Davis finished with 22 points, Kentavious Caldwell-Pope scored 15 and Danny Green added 10 for the Lakers, who didn’t trail at any point in the final 20-plus minutes. The Lakers are now 56-0 this season when leading going into the fourth quarter.

Jimmy Butler scored 22 points for Miami, which got 21 from Tyler Herro, 17 from Duncan Robinson and 15 from Bam Adebayo — who returned after missing two games with a neck injury.

“I just loved seeing our guys compete. I love how they respond in between those four lines,” Heat coach Erik Spoelstra said. “This was a throwback game and there were some moments of truth there at the end, and probably the bottom line is they won those moments of truth.”

He’s right. Whenever Miami had something going, the Lakers snuffed it out.

James’ 3-pointer with 8:18 left in the third put the Lakers up 55-54 and set the tone for the way the rest of the night was going to go; L.A. leading, Miami chasing.

“Like I always say, they’re a really, really, really good team and we’ve got to play damn near perfect to beat them,” Butler said. “We didn’t do that tonight. ... We’ll watch this, learn from it, but we can’t lose another one.”

The Lakers were up by seven with 2:27 left in the third after a 3-pointer by Davis; Miami scored the next six to get within one. Herro made a 3 early in the fourth to get Miami within one again; the Heat promptly fouled Markieff Morris on a 3-point try, and he made all three shots.

Butler scored inside to tie the game with 6:27 left; James scored the next five points himself, including a three-point play where he ended up flat on his back after spinning the ball perfectly off the glass for a score on a drive while taking contact.

“You have to credit our guys’ competitive spirit,” Lakers coach Frank Vogel said. “They were flying around and just competing at an extremely high level that end of the floor.”

A bounce here, a bounce there. Those were the differences late, and the Lakers made their own breaks.

Butler had a corner 3 that would have given Miami the lead rim out with 3:05 left; Caldwell-Pope made a corner 3 at the other end seven seconds later and the Lakers were up 93-88. Miami then turned the ball over on a shot-clock violation; Caldwell-Pope scored on a drive for a seven-point lead.

James said the job isn’t done. But he knows the Lakers are on the brink.

“I love what we did tonight,” James said.

The Lakers led 49-47 at halftime. It was just the third time in the last 26 NBA Finals games that neither team reached 50 points in the first 24 minutes. Tuesday’s was the 1,140th game played this season and just the 35th occurrence of both teams scoring 49 or less by the break, which works out to 3.1% of the time.

Heat point guard Goran Dragic (torn left plantar fascia) went through an on-court workout before the game with hopes of being able to play for the first time since the first half of Game 1, but was ruled out again shortly afterward.

Lakers big man Dwight Howard nearly collided with NBA commissioner Adam Silver while leading his team out of the locker room for pregame warmups. ... The Lakers were 14-for-39 on 3-pointers, making them 59-for-166 in the series. Before this year, the Lakers’ record for 3s in a finals were 43 made and 125 attempts — both of which were surpassed this year in the first three games. ... Robinson’s first 3-pointer Tuesday was his 50th of the playoffs, meaning he and Jae Crowder are the first duo in Heat history with 50 postseason 3s apiece. They’re the fourth teammates in NBA history to pull off that feat.

Lakers' LeBron James drives against Heat's Bam Adebayo during the first half Tuesday night. James made 8 of 16 shot attempts and finished with 28 points, 12 rebounds and eight assists.

Lakers' Anthony Davis scores as Heat guard Tyler Herro looks on during the first half. Davis finished with 22 points and nine rebounds.