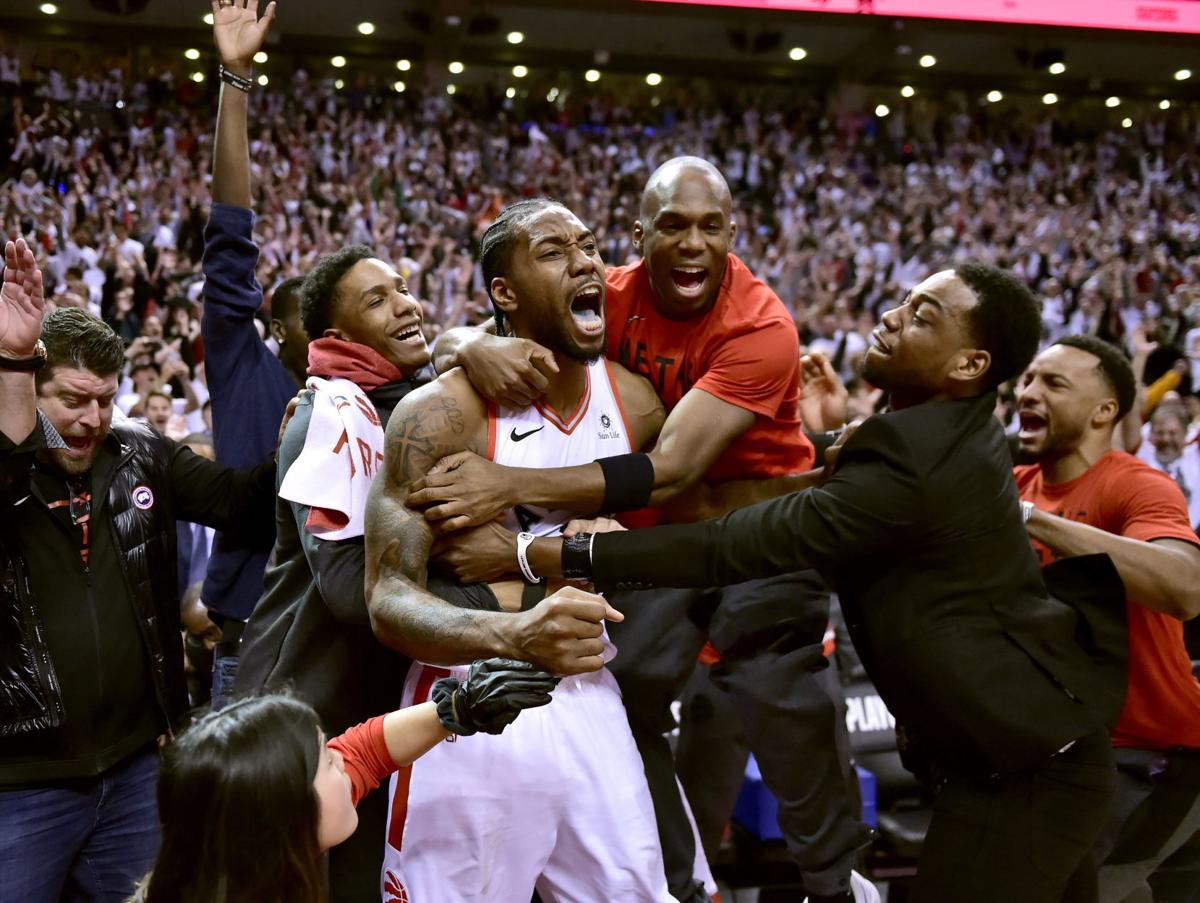 Kawhi Leonard celebrates his winning basket as time expires Sunday in Toronto. He was 16-for-39 from the field. 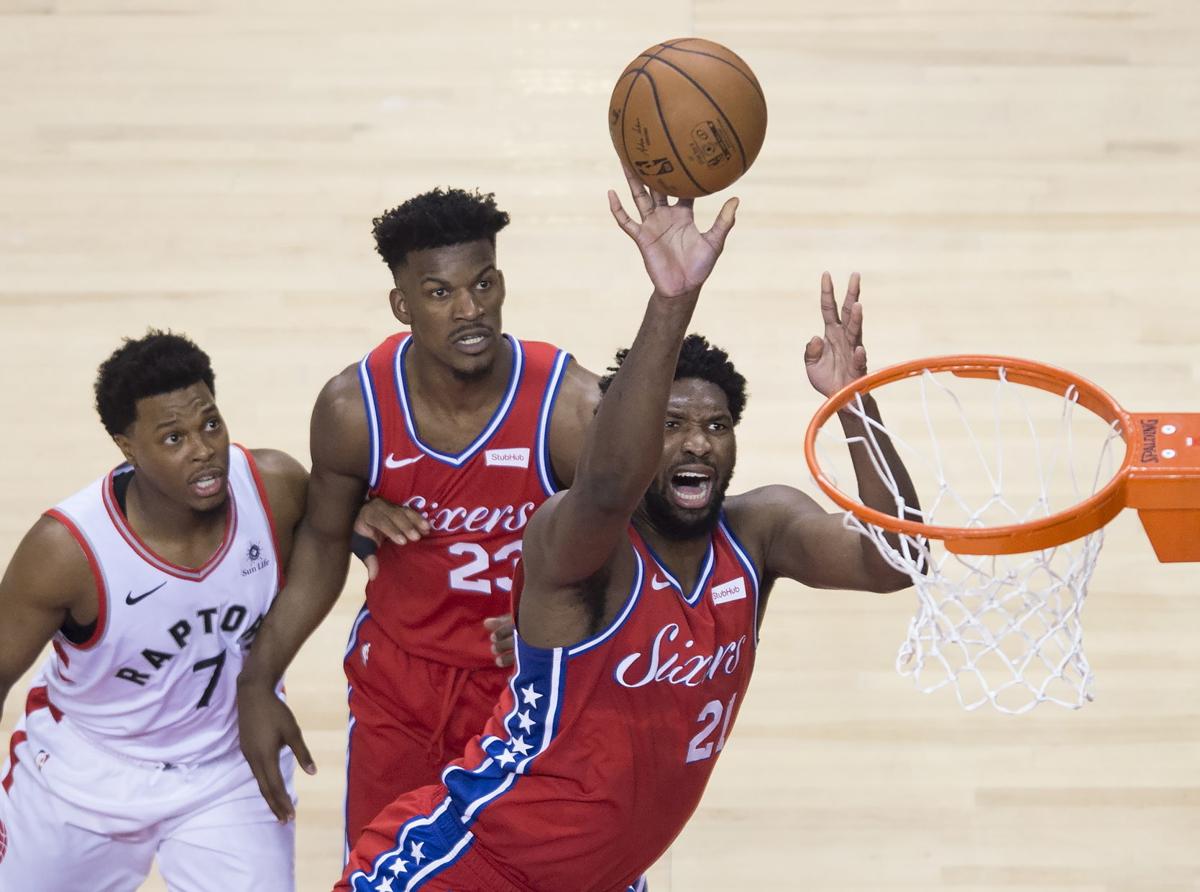 Leonard hit a shot from the corner over Joel Embiid at the buzzer that bounced off the rim four times before falling to give the Toronto Raptors a 92-90 victory over the 76ers on Sunday night in Game 7 of the Eastern Conference semifinal series.

“It was great,” Leonard said. “That’s something I never experienced before, Game 7, a game-winning shot. It was a blessing to be able to get to that point and make that shot and feel that moment.”

After Philadelphia’s Jimmy Butler tied it with a driving layup with 4.2 seconds left, Toronto used its final timeout to draw up a play for Leonard, who dribbled toward the right corner and launched the high-arching shot.

It bounced to the top of the backboard, hit the near side of the rim again, then the other side twice before going through, setting off a wild celebration as the Raptors advanced to the conference finals for the second time in four seasons. They will open the conference finals Wednesday night at Milwaukee, which won three of four meetings between the teams this season.

“It’s tough,” Butler said. “Nobody likes to lose, not that way.

“He was awesome at both ends,” Raptors coach Nick Nurse said. “That’s his uniqueness. Not only can he get you 30 and anywhere upwards from that, but there’s moments when he can just decide you’re not scoring, either.”

The Raptors ran a similar play for Leonard during the first round against Orlando. That time, he caught the ball and shot without dribbling.

“Remembering that moment, I knew I had some time to try to get some space, rather than just catch and shoot the ball,” Leonard said. “I ended up finding a spot that I like, that I work on. I just knew I had to shoot it high.”

Serge Ibaka scored 17 points, and Pascal Siakam had 11 points and 11 rebounds for Toronto.

Embiid, in tears as he left the court, led the 76ers with 21 points and 11 rebounds. JJ Redick scored 17 points, Butler had 16, and Tobias Harris provided 15 points and 10 rebounds.

“I give Toronto credit for a tenacious, switching defense,” 76ers coach Brett Brown said. “We had a hard time turning the corner once they did switch.”

Redick tied it at 85 with a three-point play with 3:29 left. Nearly two minutes passed before the next basket, Leonard’s long jumper with 1:41 to go was initially ruled a 3 but changed to a 2 after video review.

On Philadelphia’s next possession, Kyle Lowry forced a steal near midcourt and fed Siakam for a fast-break layup, giving Toronto an 89-85 lead with 1:14 left.

Butler made one of two at the line and Leonard missed a pair of jump shots, giving the 76ers the ball down 89-86 with 24.1 seconds remaining. Embiid was fouled and made both, cutting it to 89-88 with 12 seconds left.

Leonard was fouled with 10.8 seconds left. He made the first, but missed the second, setting up Butler’s tying layup.

“We did a lot of things that we could have done better but we found a way to win the game,” Lowry said. “That’s all that matters.”

Watch now: Ty Pelton-Byce talks about his time playing for the Badgers

Watch now: Ty Pelton-Byce talks about his time playing for the Badgers

Building a positive chemistry in the locker room and on the floor is something every NBA team aspires to but few accomplish. It's hard enough just to define chemistry in sports and it's even harder to achieve it, but the Bucks nailed it this season.

Hanging tough: Bucks pull away from Raptors in fourth quarter to take Game 1

Brook Lopez scored 13 of his 29 points in the fourth quarter, Giannis Antetokounmpo added 24 and the Milwaukee Bucks rallied in the final minutes to beat the Toronto Raptors 108-100 in Game 1 of the Eastern Conference final on Wednesday night.

Rallying in the fourth quarter after shooting abysmally from 3-point range in the first three, the Bucks got the series off to the start they were looking for with a 108-100 win over the Raptors, a victory that was way harder than it looked.

Taking control: Bucks blow past Raptors to go up 2-0 in East final

The Eastern Conference doesn't belong to Giannis Antetokounmpo and the Milwaukee Bucks — yet. But they're two wins away, after Antetokounmpo had 30 points and 17 rebounds, Ersan Ilyasova came off the bench to add 17 points and the Bucks never trailed on the way to a 125-103 victory over the Toronto Raptors on Friday night and a 2-0 lead in the East final.

With the teams playing at noticeably different speeds, the Bucks blitzed the Raptors en route to a 25-point halftime lead and coasted to a 125-103 victory Friday night, holding serve at home and heading to Toronto up 2-0 in the best-of-seven conference final.

Kawhi Leonard scored 36 points, including eight in the second overtime, and the Toronto Raptors beat Milwaukee 118-112 on Sunday night to cut the Bucks' lead to 2-1 in the Eastern Conference final.

Kawhi Leonard celebrates his winning basket as time expires Sunday in Toronto. He was 16-for-39 from the field.