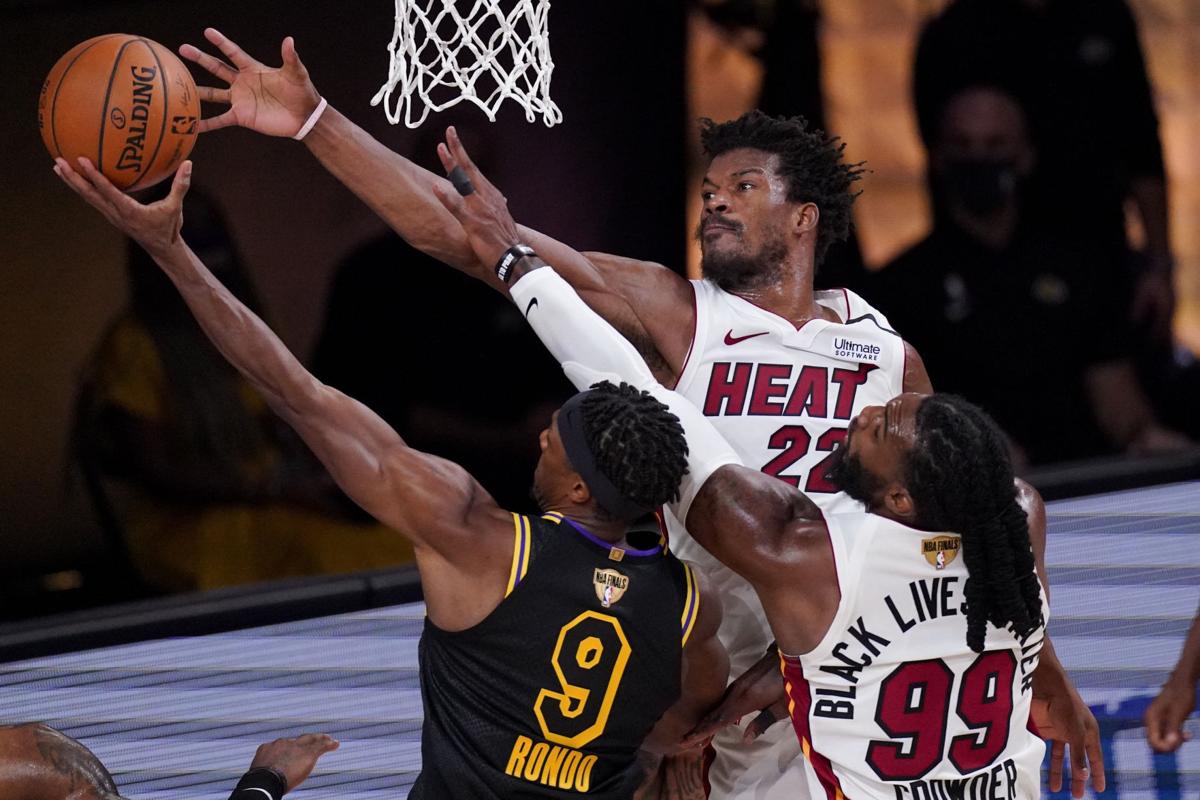 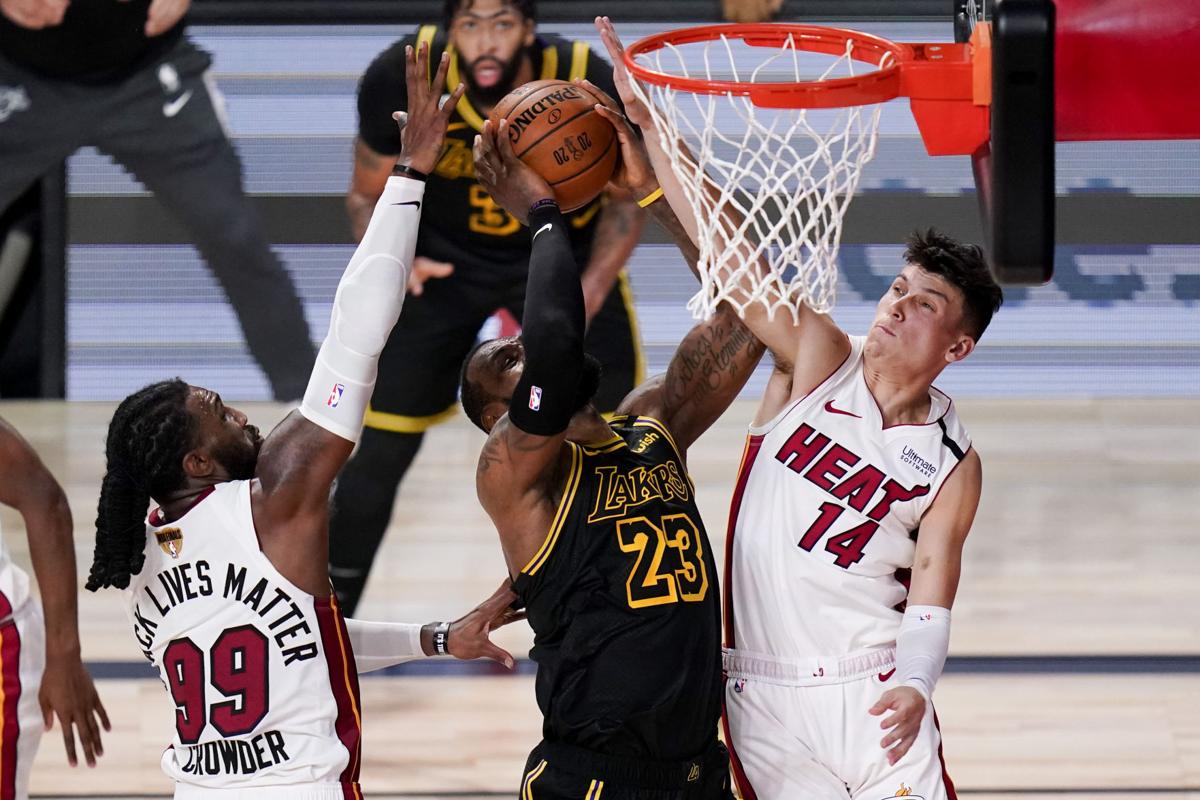 Lakers forward LeBron James scores between Heat forward Jae Crowder and guard Tyler Herro during the second half. James finished with 40 points on 15-for-21 shooting.

Jimmy Butler and the Miami Heat delayed its appearance. The NBA Finals are not over, not after Butler and the Heat pulled off a virtuoso performance in Game 5 on Friday night.

Butler had 35 points, 12 rebounds and 11 assists, and the Heat watched Danny Green’s wide-open 3-pointer in the final seconds bounce off the rim on the way to beating Los Angeles 111-108 — cutting the Lakers’ lead in the title series to 3-2.

“There was a little bit of luck that Danny Green missed that shot at the top of the key,” Butler said.

LeBron James had 40 points, 13 rebounds and seven assists for the Lakers. Anthony Davis scored 28 points, and Kentavious Caldwell-Pope had 16.

The Lakers were seconds away from the title before the Heat rallied to save the season.

“It was all about getting stops,” Butler said.

Los Angeles broke out all the stops: Davis had shiny gold sneakers on, the hue similar to the Larry O’Brien Trophy, and the team made the decision earlier in the week to skip on the scheduled purple uniforms and wear the black ones designed and inspired by Kobe Bryant instead.

But Bryant, oh, how he would have loved this fight. Drama, all the way to the end.

Robinson’s 3-pointer with 3:13 left put Miami up by two, and started a stretch where the next nine scoring possessions from either side resulted in a tie or a lead change.

“Those are the games we expect him to have,” Butler said of Robinson.

Back and forth they went. Butler got fouled with 46.7 seconds left, then slumped over the baseline video boards, clearly exhausted. He made both foul shots for a one-point lead; Davis’ putback with 21.8 seconds left got the Lakers back on top.

Heat coach Erik Spoelstra used his last timeout before the ensuing possession, just to buy Butler a couple minutes of rest. Butler drove the lane, drew contact and made both with 16.8 seconds left for a 109-108 lead.

The Lakers’ mission at that point could not have been more simple: Get a basket, win a title.

They couldn’t do it. James found Green all alone for a top-of-the-key 3-pointer which missed, and Herro finished it off with two free throws.

It was go time for the Lakers.

James’ 3 started a 17-3 run over the next 4:50. Caldwell-Pope hit a 3-pointer to put the Lakers up 97-96, then added a basket in transition about a minute later. Nobody was seated on the Lakers’ bench. The Heat went frigid.

But behind Butler, they rallied.

Butler became the sixth player in NBA Finals history to have multiple triple-doubles in the same title series: Magic Johnson and James have both done it three times, while Larry Bird, Wilt Chamberlain and Draymond Green have done it once.

The Heat led 88-82 after three quarters, scoring 28 points in that period — and getting 14 of those points on three possessions.

Butler scored while drawing a flagrant-1 foul from Dwight Howard to start a three-point play, and Robinson made a 3-pointer on the bonus possession — the sequence taking things from a tie game to a 76-70 Heat lead in a matter of 13 seconds.

Crowder’s four-point play with 3:01 left in the third put Miami up by five, and Robinson had a four-point play in the final minute of the quarter to put the Heat up six.

James had 15 points in the second quarter, his eighth quarter this season with at least that many — second in the playoffs — and the Lakers needed them all to keep Miami from building what was briefly looking like a solid lead.

The Heat led by as many as 11 in the second quarter, but James kept the Lakers afloat. Butler had 22 by the break, and Miami took a 60-56 lead into the half.

“This is a game of runs,” Butler said. “We withstood theirs.”

Lakers forward LeBron James scores between Heat forward Jae Crowder and guard Tyler Herro during the second half. James finished with 40 points on 15-for-21 shooting.