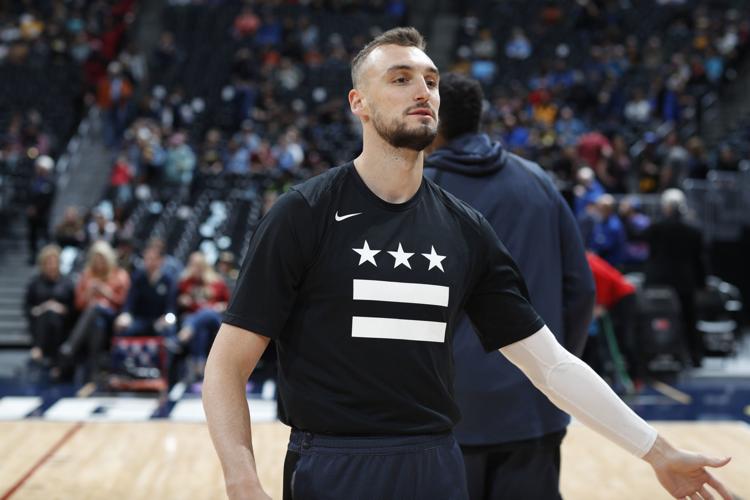 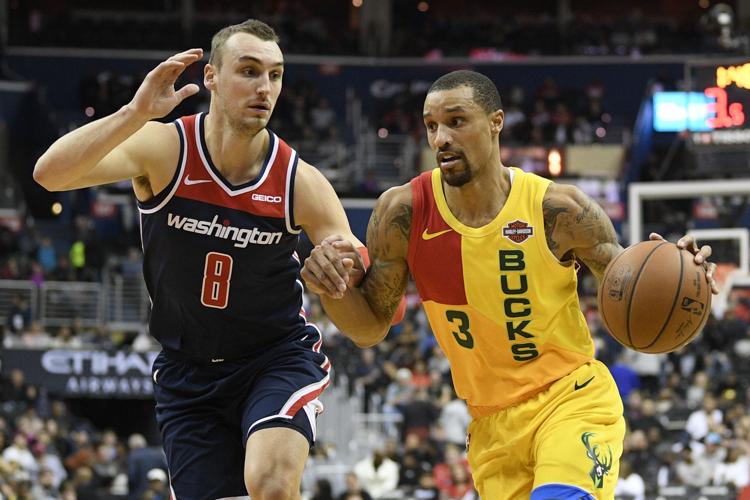 “Oh, I was prepared,” she said with a chuckle.

Yes, after her son’s 42-hour Moscow-to-Chicago odyssey made necessary by the COVID-19 crisis, Sam Dekker’s mom had brought him Clorox disinfecting wipes, a change of clothes (a t-shirt, Wisconsin sweatshirt and Nike sweatpants), his favorite sandwich from Jimmy John’s (the No. 9 Italian Night Club) and a Gatorade (lemon lime) for the 135-mile drive back to Sheboygan, the final leg of a remarkable journey during which he nearly wound up stuck — twice — thousands of miles from home amid the worldwide novel coronavirus pandemic.

And now, with his Delta Airlines flight from John F. Kennedy International Airport in New York finally having arrived at 10:15 p.m. on March 27, there was only one thing Carol could not give him:

“No! We had to have six feet,” she said of herself and Sam’s dad, Todd. “We were following the rules. We are rule followers.”

They are also relieved parents, happy to have 26-year-old Sam home from his first season playing professionally in Russia, continuing to chase his basketball dreams after playing 200 NBA games over four seasons with four teams following his standout career at the University of Wisconsin.

“Of course, Russia was not his dream, but he wants to play basketball, so that’s where he was this year,” Carol said. “It was not a terrible experience for him. I think he grew up a lot, he’s seeing the world, and that’s a good thing. But I’m glad he’s home now. That’s the best thing.”

She’ll get no argument from her son on that. A few days earlier, Sam had been scrolling through his Twitter feed and saw a headline about his buddy Aaron Rodgers’ exodus from Peru. During a podcast, the Green Bay Packers quarterback had likened his escape to the climactic scene in the 2012 Ben Affleck film “Argo,” which tells the true, only slightly embellished story of six American hostages’ escape from Iran in 1979.

In the final scene, the hostages and Affleck’s character (Tony Mendez, the mastermind behind their extraction from Tehran) are on a Swiss Air flight with Iranian authorities in pursuit on the runway. The plane manages to get in the air, and when the flight attendant announces that the plane has cleared Iranian airspace, the group can exhale and celebrate.

For Dekker, whom Rodgers had befriended at the annual Wisconsin Sports Awards years ago and supported by jumping on the bandwagon for the Badgers’ back-to-back Final Four teams in 2014 and 2015, the Argo scene had crossed his mind, too, as he hurriedly packed four duffle bags and headed to Moscow’s Vnukovo International Airport.

Having spent 14 days in self-quarantine after he and his Russian teammates on Lokomotiv Kuban had faced an Estonian team with several players who’d tested positive for COVID-19, Dekker had taken two coronavirus tests — both of which were negative. With the remainder of the basketball season canceled, he could finally head home to the U.S. — something his parents and his wife, Olivia, had been pleading for him to do earlier, not realizing he couldn’t because of the quarantine.

“So my last day of quarantine was — thankfully — the last day before I left,” Dekker recounted during an appearance on ESPN Wisconsin last week. “Everyone was like, ‘Why didn’t you leave?’ People were mad at me that I wasn’t gone yet. But I couldn’t. I had to get tested twice for coronavirus — thankfully both were negative tests — and once that quarantine was lifted, then we could think about leaving.”

Then, on the morning of March 26, a Lokomotiv front-office staffer called to warn Dekker the country was canceling all international flights later in the day. Dekker called his wife and his mother — “It was 3:21 in the morning here when my phone rang,” Carol said — and got on the final flight out of Russia, bound for Istanbul, Turkey. But first, he had to explain to airport security that he was indeed clear of the virus and allowed to travel.

“They actually gave me a hard time in Moscow looking at my passport. Because they saw I was in Estonia two and a half weeks before, and they were like, ‘They had an outbreak there,’” Dekker said, acknowledging he’d likely have been trapped in Russia had his quarantine lasted one day longer. “They were still a little wary of that, but then I pulled out a sheet of paper that said I was tested twice, I was in quarantine, so that helped me get by. But, yeah, it was important that I had all those documents so I could get on the plane and get out of there.”

His odyssey was just beginning, though. He arrived in Istanbul at almost midnight, then struggled to get through customs and into an airport hotel. His flight the next day from Istanbul to JFK wound up being the last flight to the U.S. from Turkey — meaning he was again just hours from being trapped in a foreign country with no way home during a worldwide pandemic. In fact, the same staffer from Lokomotiv gave him the heads-up that he would again be cutting it close.

“That was the weirdest part, in Istanbul,” Dekker said. “When I was walking to my gate, the same woman that helped our team with travel for our Russian flight called me and said, ‘My friend from Turkish Airlines just called me and said they’re about to cancel all flights out of Turkey. So please let me know if you get on board and they’re still running your flight.’

“That’s when I got scared. I didn’t tell my parents, because I knew my mom would freak.”

Turkish Airlines ended up holding that flight for two hours to allow any other U.S.-bound passengers booked on later flights to board the plane.

“So for the next two hours I was seeing sweaty people running onto the plane,” Dekker said. “But props to the airline for giving those people time to get to the airport and get on the plane and get home.”

Once the flight went wheels-up, Dekker finally exhaled. Just like the characters in Argo.

“I just leaned back in my seat like, ‘Thank you,’” Dekker admitted. “It was definitely a stressful time, a crazy time without much sleep, but I made it. Just hoping none of the flights were canceled or delayed, seeing how empty the airports were and how cautious everyone was, I’m definitely thankful to be stateside and home. Even though everyone’s locked down, it’s nicer to do that at home.”

Like the rest of the sporting world, Dekker was disappointed to see the NCAA tournament canceled and the NBA season suspended. For now, he’s happily at home with his wife, “hunkered down, doing in-home workouts and trying not to drive Olivia too crazy and stay out of her way.” Where his basketball travels will take him next — and when — remains up in the air like the rest of his, and everyone else’s, life.

“I will say there have been a lot of tough times, where I’ve called Liv or my brother (John) or my sister (Hannah) saying, ‘I don’t know how much longer I can do this,’” Dekker said. “You need to hear from them, ‘Sam, you can do this, you can get through it.’ Because it’s tough, especially your first year being in Russia. It’s not easy. Yeah, I’m playing basketball professionally, but it’s not the same.

“But there are also really, really good days. When you have enough of those good days, it’s a sign to you that life is still good and to stay positive. The basketball part was still fun for me, it’s what I love to do, and it was a great learning experience for me. So I only have positive thoughts moving ahead of what’s left for me.”

A recap of how 12 players with Wisconsin ties fared in the NBA regular season this year.

Photos: How NBA players with Wisconsin ties fared in the 2015-16 season

How NBA players with Wisconsin ties fared in the 2015-16 regular season.

No NCAA tournament in 2020? The State Journal has you covered. Over the course of two-plus weeks, we’re looking back at one UW game per round. Today, it’s the Badgers’ 71-64 win over Kentucky in the 2015 Final Four.

No NCAA tournament in 2020? The State Journal has you covered. Over the past two-plus weeks, we’ve looked back at one UW game per round. Today, the final part of that series, UW’s 39-34 win over Washington State in the 1941 title game.

Red Zone podcast: COVID-19's effect on recruiting and a season in limbo

State Journal beat reporter Colten Bartholomew does a solo podcast from his bedroom closet to talk about Badgers football news. He starts by breaking down how COVID-19 coronavirus is affecting coaches and players on the recruiting trail, how they're adjusting, how the regular season might be altered by COVID-19, and the financial impacts that football has on UW athletics. Then, he shares part of his conversation with Alvis Whitted, UW's new receivers coach.

State high schools haven't exactly flooded the NBA with talent over the last 70 years, but Wisconsin has produced a few all-stars, 20-point sc…

With a rollercoaster year on the basketball court coming to a close, it didn't take long after the final buzzer sounded Wednesday in Turkey for the former Badgers star to appreciate how important it was to finish on a high note.

Colin Kaepernick secures Raiders workout after 5 years out of NFL