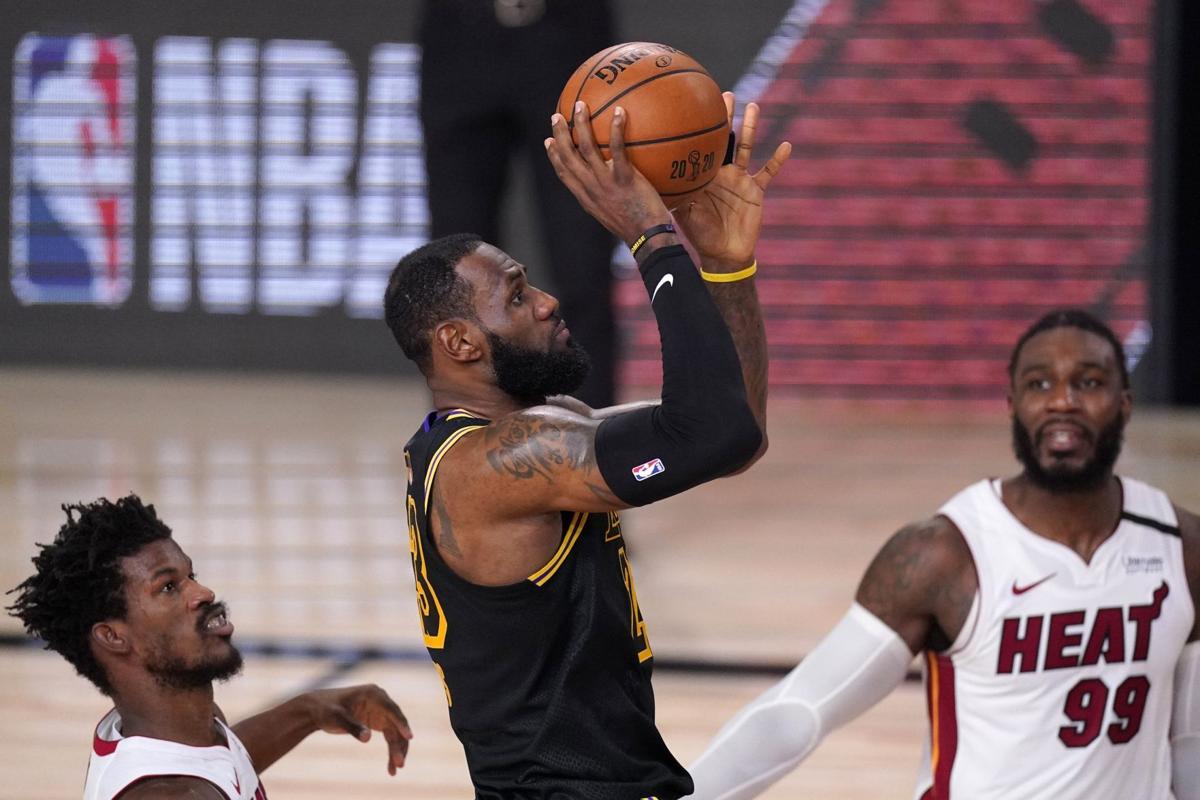 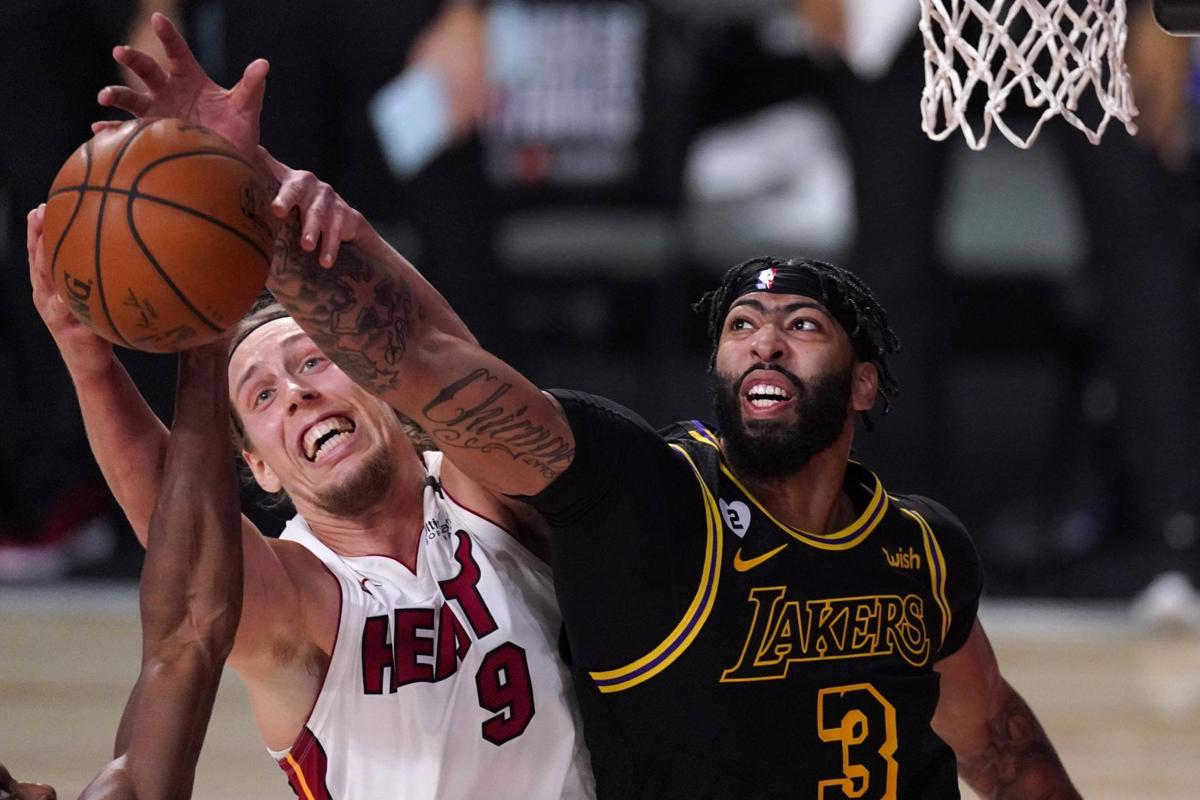 Heat's Kelly Olynyk and Lakers' Anthony Davis battle for the basketball during the second half. Davis scored 32 points on 9-for-16 shooting and had 14 rebounds.

LAKE BUENA VISTA, Fla. — Anthony Davis got most of his points with a feathery shooting touch. LeBron James flexed his muscle to bulldoze his way to damage. And whenever the lead looked even the tiniest bit threatened, the Los Angeles Lakers had an answer.

The NBA Finals are halfway to a coronation.

James finished with 33 points, nine rebounds and nine assists, Davis made 14 of his first 15 shots on the way to 32 points, and the Lakers took a 2-0 lead in the title series by beating the short-handed Miami Heat 124-114 on Friday night. The Lakers shot 51%, making 16 consecutive shots from 2-point range in a stretch that started late in the first quarter and ended late in the third.

James and Davis were the first Lakers duo to score at least 32 points in a finals game since Game 3 against New Jersey in 2002, when Shaquille O'Neal and Kobe Bryant did it.

“It’s very humbling that we can be even mentioned with those greats," James said.

Shaq and Kobe got rings that year.

James and Davis are two wins away.

“Those guys are playing at an extremely high level, and hopefully we can get two more wins," Lakers coach Frank Vogel said.

Jimmy Butler finished with 25 points, 13 assists and eight rebounds for Miami, which played without injured starters Bam Adebayo (neck and left shoulder) and Goran Dragic (torn left plantar fascia). The Heat scored 39 points in the third quarter and that was only good enough to cut a 14-point halftime deficit to a 10-point hole going into the fourth, mainly because they just couldn’t get enough stops.

“Look, I love these guys. I love the way we compete," Heat coach Erik Spoelstra said. “We have to figure out how to overcome this and get over the top.

Game 3 is Sunday night. It’s unclear if Dragic, Adebayo or both could return; each lobbied to play Friday night, before the Heat had to make the call to keep them sidelined.

It’s also unclear how much it will matter.

This is the 24th time that James has had a 2-0 series lead; his teams in Cleveland, Miami and L.A. are 23-0 in the previous instances. And the last time the Lakers’ franchise has wasted a 2-0 lead was in the 1969 finals against Boston.

“Until we win four games, we haven’t accomplished our goal," Lakers guard Alex Caruso said. “It’s been over a year together and we’ve talked about the same goal from Day One. We’re still here chasing that same goal. Until we get four wins, we’re staying hungry."

Kelly Olynyk scored 24 points for the Heat, who trailed by as many as 32 in Game 1 and — even without Adebayo and Dragic — were far more competitive in Game 2. Miami got within nine points in the fourth, but never got close enough to truly put a scare into the Lakers.

“Maybe we've just got to play a lot harder, to know that's how we're going to squeak out a win in the end," Butler said. “There really isn't too much to say to our guys. We understand what we have to do."

Whitnall High School's Tyler Herro had 17, Kendrick Nunn scored 13 and Jae Crowder had 12 for the Heat. Herro and Meyers Leonard took Dragic’s and Adebayo’s spots in the starting lineup.

“We had it right there on the edge, but we just couldn’t push it over," Olynyk said. “We can build on that."

Rajon Rondo had 16 points, while Kentavious Caldwell-Pope and Kyle Kuzma each had 11 for the Lakers — who improved to 4-0 in these playoffs when wearing the Kobe Bryant-inspired “Black Mamba" uniforms, one of many tributes to the Lakers legend who died Jan. 26 in a helicopter crash.

“This is what it's all about," James said. “We're thinking about the Bryant family ... and hopefully we're making them proud."

Heat: Miami led for 53 seconds in the first quarter and have led for 10:44 out of 96 minutes played in the series. ... The Heat have rallied from a 2-0 series hole only once in eight previous tries, that one being the 2006 NBA Finals. ... Spoelstra collided with official Eric Lewis while trying to call time with 7:49 left. They both got a laugh out of it.

Lakers: Jeanie Buss, the team’s owner and president, was in the bubble for the game. ... Flea, the bassist from the Red Hot Chili Peppers — formed in Los Angeles — performed the national anthem. ... James, in his 10th NBA Finals, has a 2-0 lead in the title series for the first time. ... The Lakers took a franchise-record 47 3s, making 16.

Herro, at 20 years, 256 days, became the youngest player to start an NBA Finals game. He did so eight days younger than Magic Johnson was when he started Game 1 of the title series for the Lakers against the Philadelphia 76ers on May 4, 1980. They’re the only 20-year-olds to start; Tony Parker is the third-youngest, at 21 years, 18 days for San Antonio in Game 1 against New Jersey on June 4, 2003.

The Lakers had a knack in the second half for making clutch 3’s whenever it seemed like Miami was poised to threaten. Rondo made a 3 with 37.2 seconds left in the third to push a nine-point lead back to 12, Kuzma connected 47 seconds into the fourth to make the lead 13 and, with the Heat within nine, Markieff Morris hit with 9:41 left to make it 111-99.

Heat's Kelly Olynyk and Lakers' Anthony Davis battle for the basketball during the second half. Davis scored 32 points on 9-for-16 shooting and had 14 rebounds. 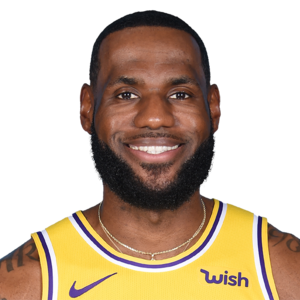