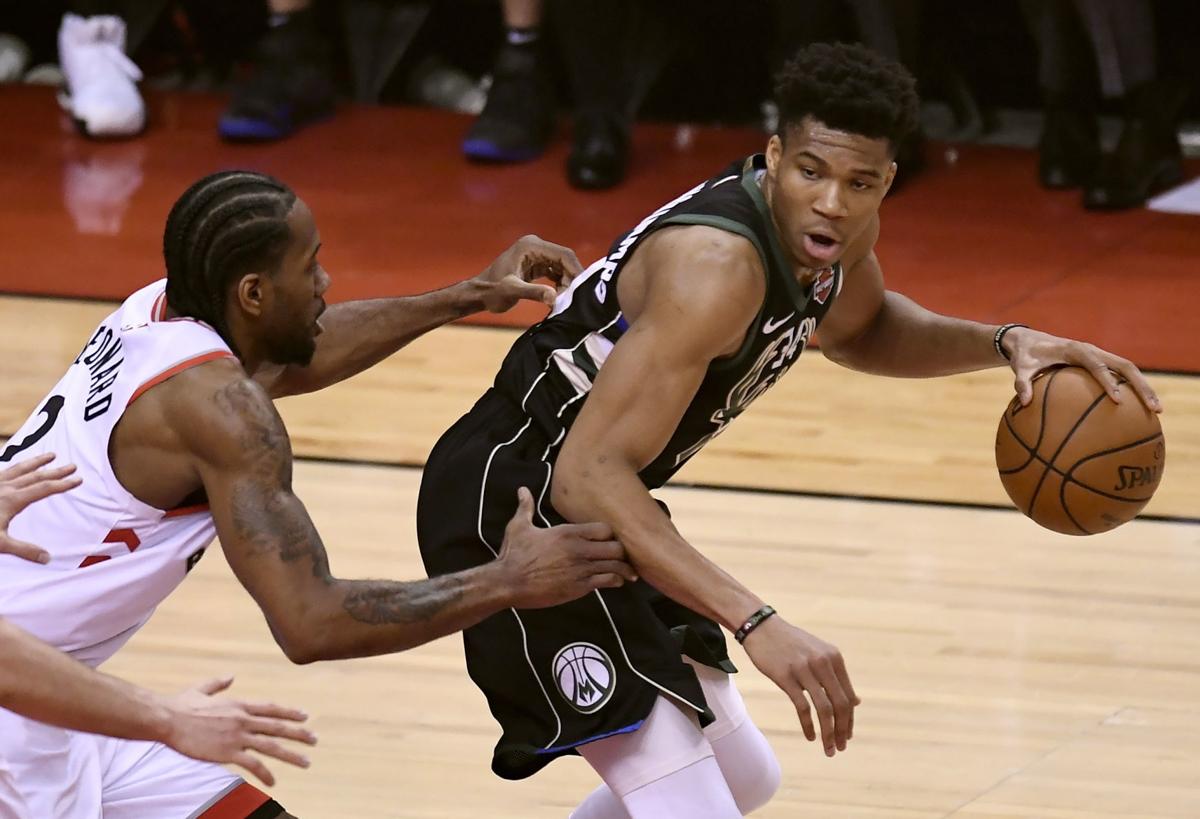 Raptors forward Kawhi Leonard pressures Bucks forward Giannis Antetokounmpo during the decisive Game 6 on Saturday, May 25, 2019. Antetokounmpo shot only 43.5% from the floor during four playoff losses to Toronto. 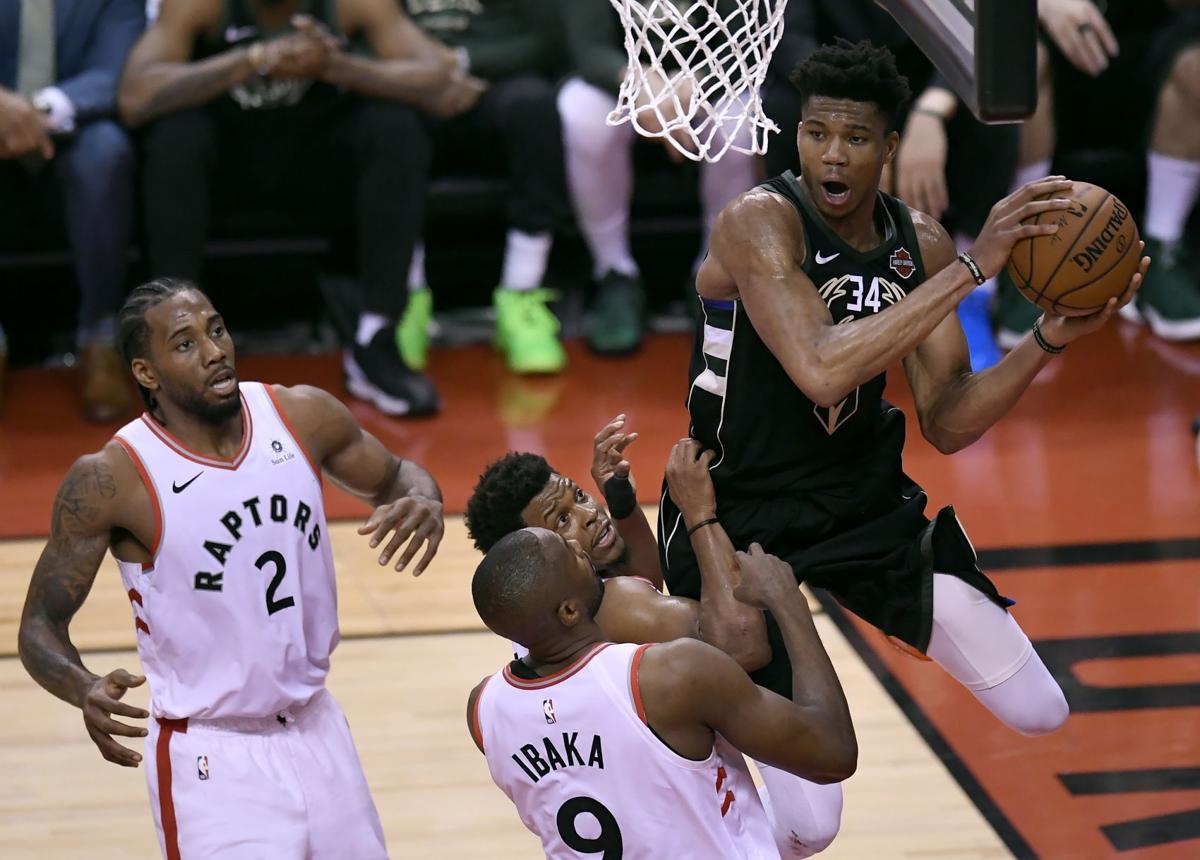 Milwaukee Bucks forward Giannis Antetokounmpo (34) looks to pass the ball as Toronto Raptors' Kawhi Leonard (2), Serge Ibaka (9) and Kyle Lowry defend during the second half of Game 6 of the NBA Eastern Conference finals Saturday, May 25, 2019, in Toronto.

MILWAUKEE — He's arms, shoulders and legs — a combination of strength, size and skill that's rare even in the NBA. He's Giannis Antetokounmpo, the NBA's reigning Most Valuable Player, and the player that gets the most ink in scouting reports — and not because of his last name's wingspan.

"He's aggressive, plays the game extremely hard, very skilled. He's a 7-foot guy who can handle the ball, dribble by defenders into the paint, make a great move in the post," Clippers forward Kawhi Leonard said. "And he's hitting the outside shot a little bit more this year. He can pass the ball. All that added together is really tough."

If voter fatigue isn't a factor, Antetokounmpo could very well be the MVP for a second-straight season, as his 31 points, 13.2 rebounds and 5.5 assists per game have the Bucks tied for the best record in the NBA. They've won 13 straight and demolished their last three opponents by at least 24 points.

But Friday, Antetokounmpo will see Leonard on the court for the first time since he couldn't get past the Raptors in the Eastern Conference Finals; a two-games-to-none Bucks' advantage swung the other way once Leonard switched to one of the NBA's toughest covers. (Leonard didn't play when the Bucks beat the Clippers earlier this season.)

"It's not about the guy who's guarding him," Leonard maintained before the Clippers held a rare practice Thursday. "It's not a one-on-one league. . We just have to focus to try and make it harder for him to score the ball."

On paper, the Clippers have the tools. There's Leonard, who has done it before. There's Paul George, who is also physically capable of guarding Antetokounmpo for stretches. And there's Maurice Harkless, the logical choice to get the first crack at the Bucks' star.

Antetokounmpo has scored fewer than 25 points only three times this season, and the Bucks have lost just one of those games. That night, early this season against the Celtics, Antetokounmpo was still an efficient eight-of-13 from the field.

After Friday night's meeting in Milwaukee, the Clippers won't face the Bucks again this season unless the teams meet in the NBA Finals. And it could happen. Rivers called the Bucks the favorite in the East.

If that series happened, the Clippers could unfurl all sorts of exotic coverages and different strategies against the Bucks superstar. With just a single practice notice? It'll be more about providing just enough resistance against Antetokounmpo.

"Every game is a test," Leonard said multiple times. " . We've got to go out there and be ourselves."

Kawhi Leonard sat out a 129-124 home loss to the Milwaukee Bucks on Wednesday night, the second time he's missed the nationally televised front end of a back-to-back this season.

Reigning NBA MVP Giannis Antetokounmpo had 38 points and 16 rebounds to help the Milwaukee Bucks beat the Los Angeles Clippers 129-124 on Wednesday night for their fourth victory in a row.

Kawhi Leonard won't play Wednesday against Bucks, and the NBA is fine with it

Giannis Antetokounmpo and the Milwaukee Bucks were a couple wins from beating Toronto last season. The Philadelphia 76ers were maybe a couple bounces from doing it a round earlier.

Giannis Antetokounmpo looks to improve as Bucks' leader this season

Stung by the Bucks blowing a 2-0 lead against the eventual NBA champion Raptors in the Eastern Conference finals, Giannis Antetokounmpo said his priority during the offseason was to become a better leader, both on and off the court.

The Los Angeles Clippers will be landing Kawhi Leonard as a free agent after they acquire Paul George from the Oklahoma City Thunder in a massive trade for players and draft picks, a person familiar with the negotiations said.

Tom Oates: Keeping core together tops offseason priorities for Bucks; getting it done won't be easy

After going all-in to win the NBA championship last season and putting themselves in a salary-cap bind, the Bucks are trying to bring back their core group, make improvements internally and take another run at it.

Dan Woike: Now that Kawhi Leonard made history, Raptors can't blame him if he leaves

This summer will be the first time Kawhi Leonard has gotten to choose where he works. And there's a sense that if someone as determined as him ever had his eyes set on Southern California, not even a title could change it.

Lakers may be grabbing the headlines, but Bucks also are rolling

The Lakers and Bucks took different paths to the best record in the NBA at the quarter-pole at 19-3. But it wouldn't be wise to think that the team that isn't from Los Angeles isn't capable of this season's Hollywood ending.

Bucks rout Clippers behind 27 by Giannis Antetokounmpo on his birthday

Celebrating his 25th birthday, Giannis Antetokounmpo has a double-double with 27 points in 11 rebounds in the 119-91 victory at Fiserv Forum.

Giannis Antetokounmpo had 32 points and 15 rebounds to lead Milwaukee to its 15th straight victory, 110-101 over the Orlando Magic at Fiserv Forum.

Reigning league MVP Giannis Antetokounmpo sat out but the Bucks kept on rolling, getting 29 points from Eric Bledsoe and 24 from Khris Middleton in a 127-112 victory over the New Orleans Pelicans that extended their winning streak to 16 games.

Raptors forward Kawhi Leonard pressures Bucks forward Giannis Antetokounmpo during the decisive Game 6 on Saturday, May 25, 2019. Antetokounmpo shot only 43.5% from the floor during four playoff losses to Toronto.

Milwaukee Bucks forward Giannis Antetokounmpo (34) looks to pass the ball as Toronto Raptors' Kawhi Leonard (2), Serge Ibaka (9) and Kyle Lowry defend during the second half of Game 6 of the NBA Eastern Conference finals Saturday, May 25, 2019, in Toronto.