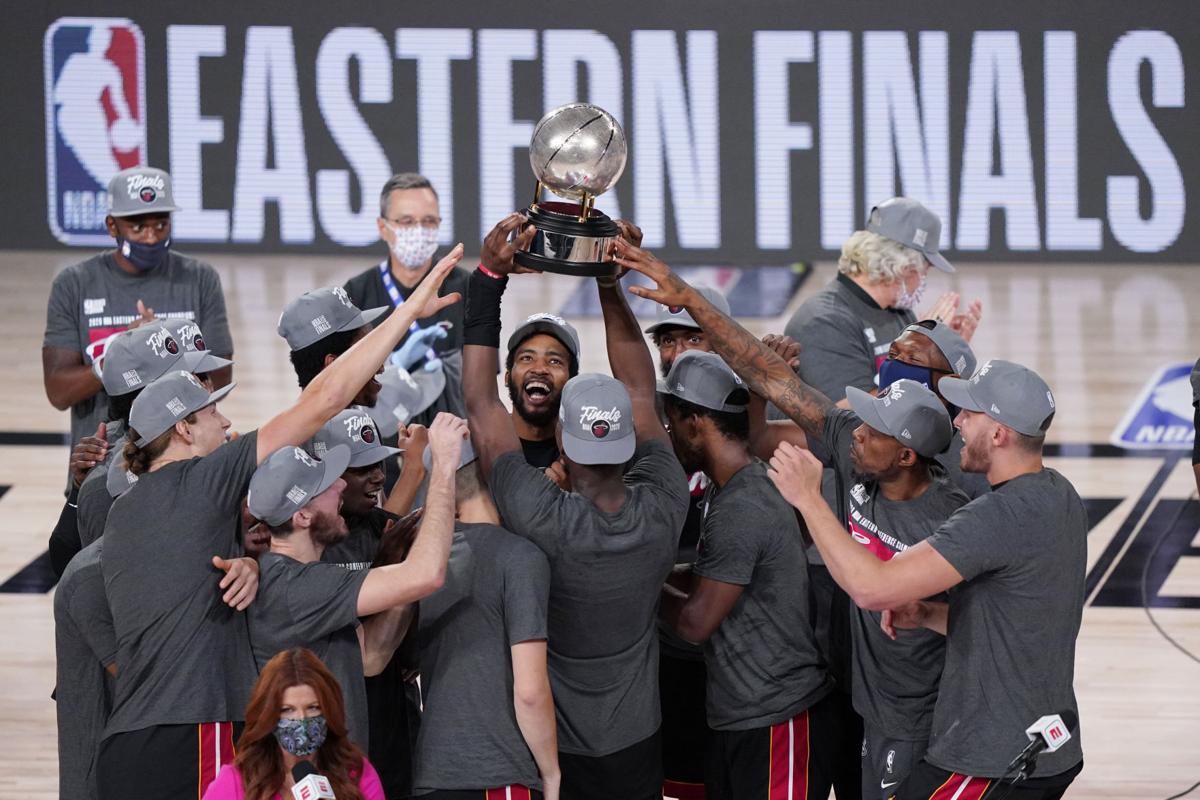 The Miami Heat celebrate advancing to the NBA Finals with a win over the Boston Celtics on Sunday, Sept. 27, 2020, in Lake Buena Vista, Florida. 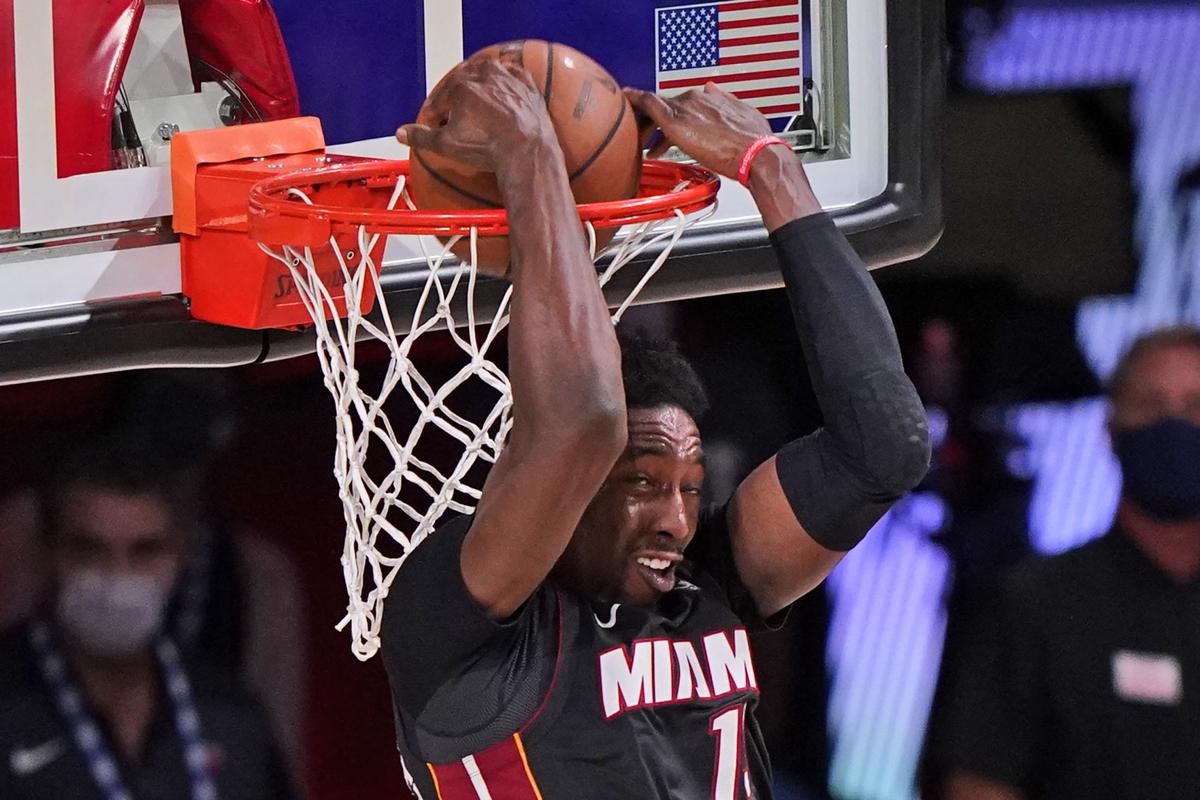 Heat's Bam Adebayo dunks for two of his 32 points Sunday.

LAKE BUENA VISTA, Fla. — It was exactly one year ago Sunday when Jimmy Butler walked into the Miami Heat practice gym, took a seat on a makeshift stage and said he wanted to be part of the team’s next title run.

He’ll have that chance.

The Heat are going to the NBA Finals — surprising many, perhaps, but not themselves. Bam Adebayo scored a season-high 32 points and grabbed 14 rebounds, Butler scored 22 points and the Heat won the Eastern Conference finals for the sixth time by topping the Boston Celtics 125-113 on Sunday night.

“A great series. It was so competitive," Heat coach Erik Spoelstra said. “I mean, in many ways, this was a seven-game series, just how competitive it was. Extremely well-coached and well-put together and we are just honored to be a part of that type of series in the conference finals, and then we get an opportunity for the next stage. Our guys will look forward to it. We’re going to try to enjoy it for a night."

The Heat won the series 4-2 — and now, waiting on that next stage to decide the NBA title, are LeBron James and the Los Angeles Lakers. Game 1 is Wednesday night.

“We deserve to be here," Dragic said.

Jaylen Brown scored 26 points, Jayson Tatum had 24 and a career-high 11 assists, and Marcus Smart and Kemba Walker each scored 20 points for Boston — which fell in the East finals for the third time in the last four seasons.

“Miami deserves a lot of credit," Celtics coach Brad Stevens said. “They’re super physical, super tough, very, very savvy. I think they’re the best team in the East and deserve to be representing the East in the way that they have played."

Miami was down by six early in the fourth before regaining control. A 6-0 burst — Herro had the last five of those points, needing only 31 seconds to do so — tied it at 96. Boston took the lead twice more, with Adebayo answering both times, first with a dunk, then a go-ahead three-point play with 6:16 left.

He smacked the floor in celebration.

It’s like they knew what was coming. They never trailed again. Herro had a pair of baskets in a 9-0 burst that put the Heat up by 10, Adebayo found Butler for a layup and a 116-102 lead everyone on the Heat bench was on their feet.

“This means everything," Herro said.

And before long, all the Celtics could do was offer their congratulations.

The Heat, who beat the top-seeded Milwaukee Bucks to advance to face Boston, are the only NBA franchise with six Finals appearances in the last 15 years. They’re seeking their fourth title, and this chance didn’t come easily.

The Heat had a 5-for-5 stretch from 3-point range in the first quarter, but otherwise struggled again from beyond the arc in the first half. They were 6 for 14 from deep in the first 24 minutes, Boston was 11 for 23 before the break and the Heat took a 62-60 lead into halftime.

And the margin remained two going into the fourth.

Iguodala’s fourth 3-pointer — in as many attempts — with 4:20 left in the third put the Heat up eight, before Brown had five points in a 10-2 Boston spurt to tie it. Dragic had a go-ahead layup on Miami’s final shot of the quarter and it was 88-86 Heat with 12 minutes remaining.

The Heat scored 35 of the game's final 52 points. The game was theirs. So was the silver trophy that conference champions get.

Celtics: Tatum took 15 shots in the first half, the first time in his 270-game career that he’s done that. He had taken 14 on four other occasions. ... Tatum’s top four assist-total games of his career have come in the bubble.

Heat: The Heat are now guaranteed no less than $4,399,686 for their playoff share, and that number would rise to $5,791,041 if they win the title. ... Udonis Haslem is the only player to be on all six Heat teams that have made the finals.

Walker has been to the playoffs three times, and his team has been eliminated by Miami in all three of those appearances — with three different nicknames. Charlotte was still the Bobcats when the Heat swept them in the 2014 first round, the Heat rallied to beat Charlotte’s then-rebranded Hornets in seven games in the 2016 first round, and now this win over the Celtics.

The Celtics and Heat were getting some support from afar before Game 6. Celtics coach Brad Stevens was pleased to hear video of New England Patriots coach Bill Belichick signing off from his postgame news conference Sunday by saying “good luck to Brad and the Celtics tonight. We’ll be pulling for them.” And at the Miami Marlins’ regular season finale, outfielder Lewis Brinson had a Butler jersey (in the popular Heat ‘Vice’ theme) underneath his game jersey.

Milwaukee's Giannis Antetokounmpo has repeatedly expressed a desire to remain with the franchise and offered a similar assurance after the team's season-ending loss.

The Miami Heat celebrate advancing to the NBA Finals with a win over the Boston Celtics on Sunday, Sept. 27, 2020, in Lake Buena Vista, Florida.

Heat's Bam Adebayo dunks for two of his 32 points Sunday.