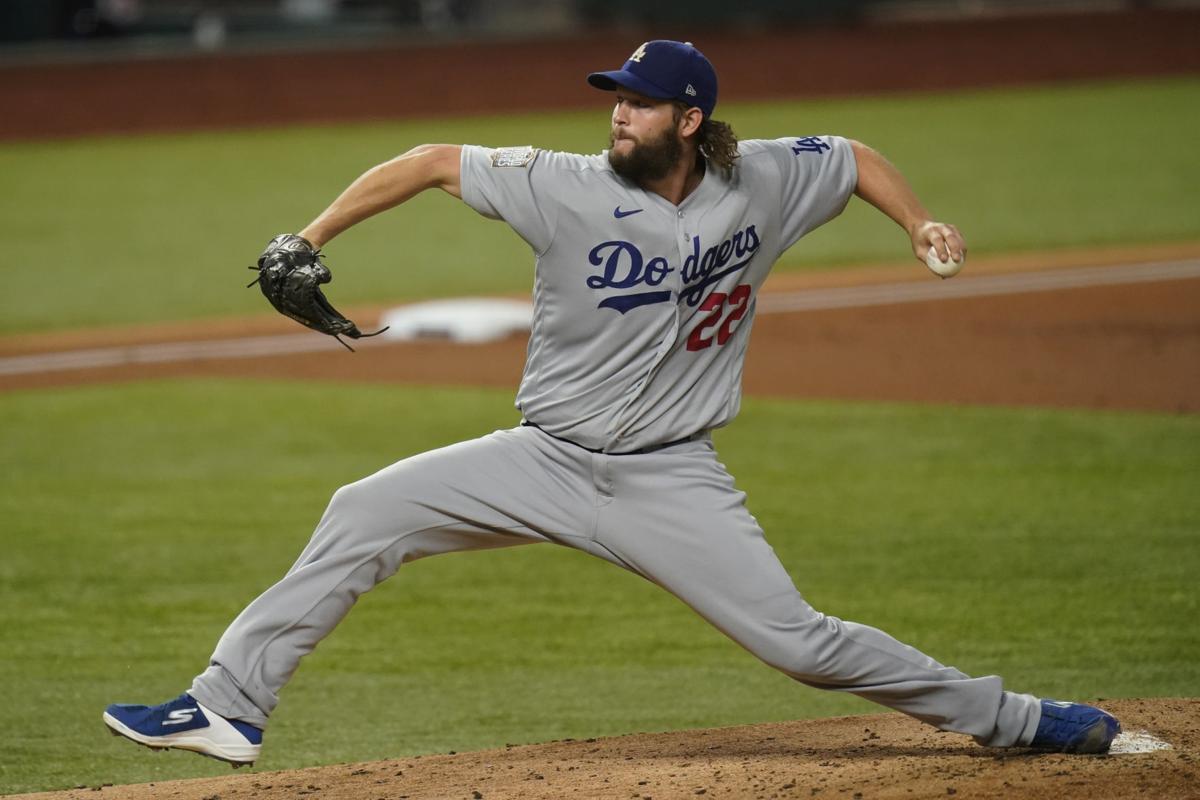 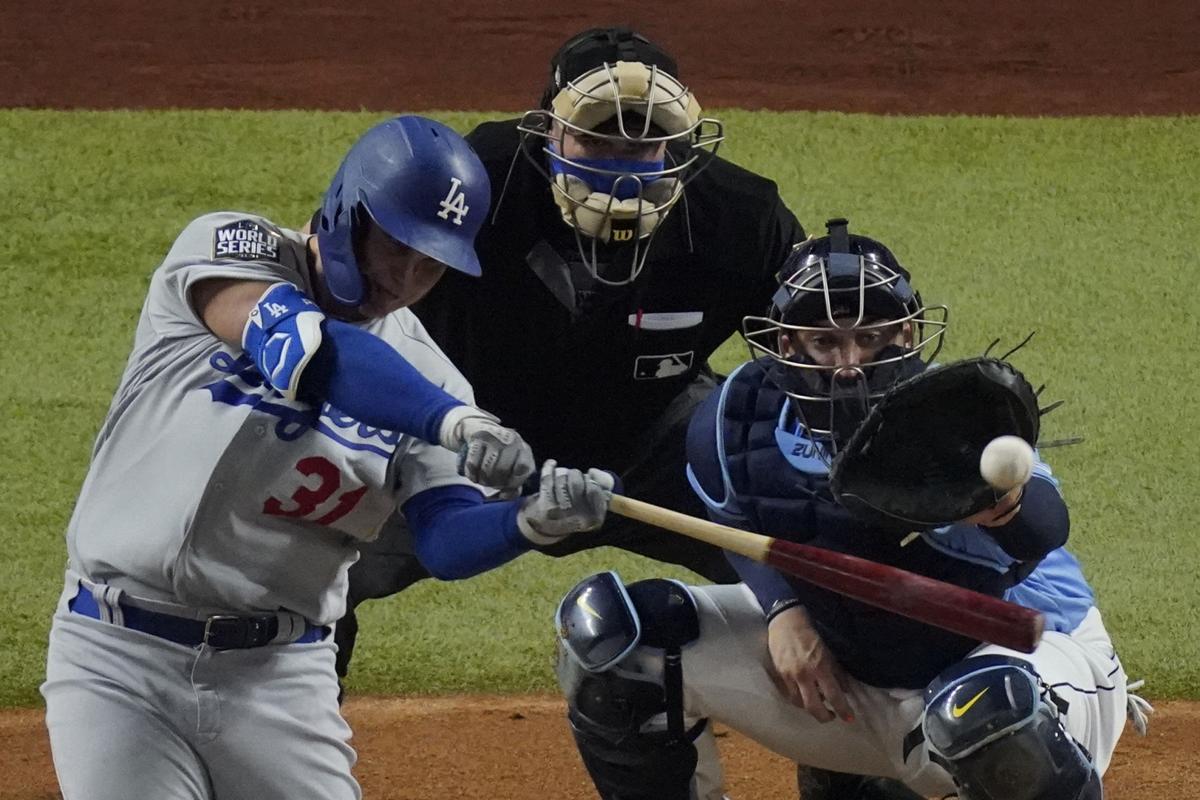 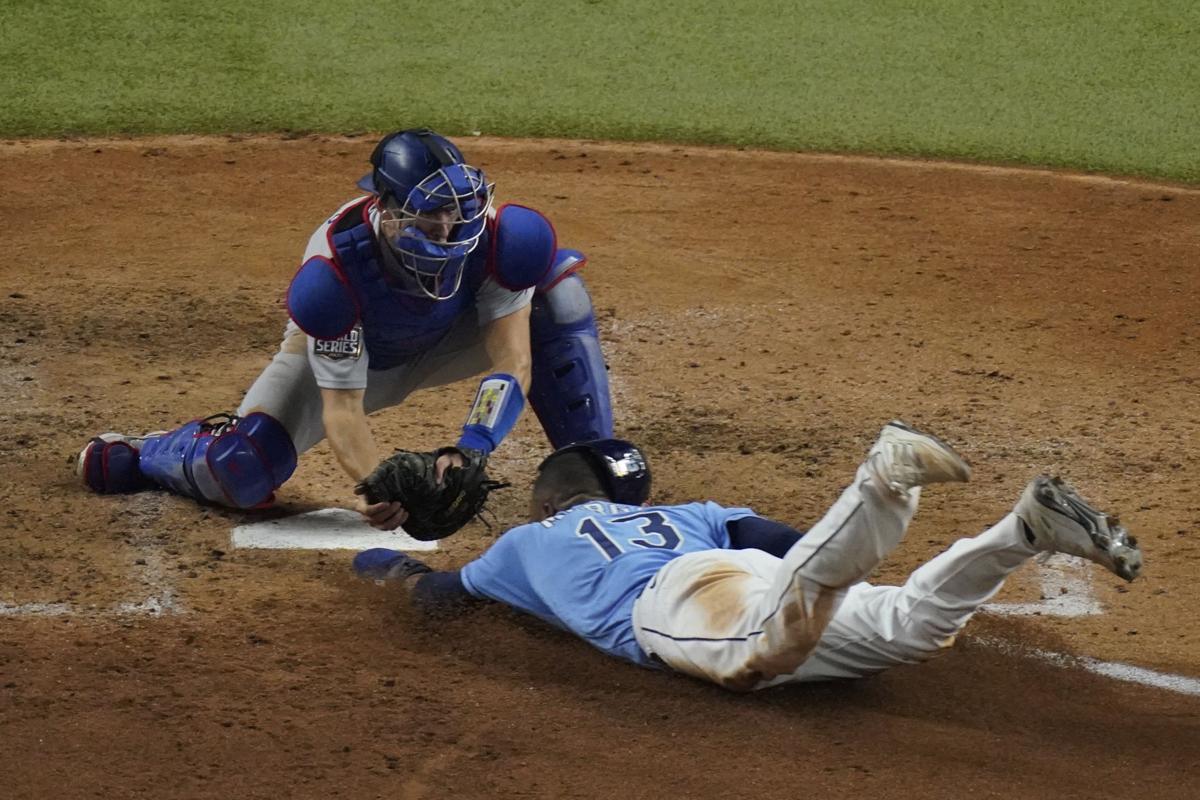 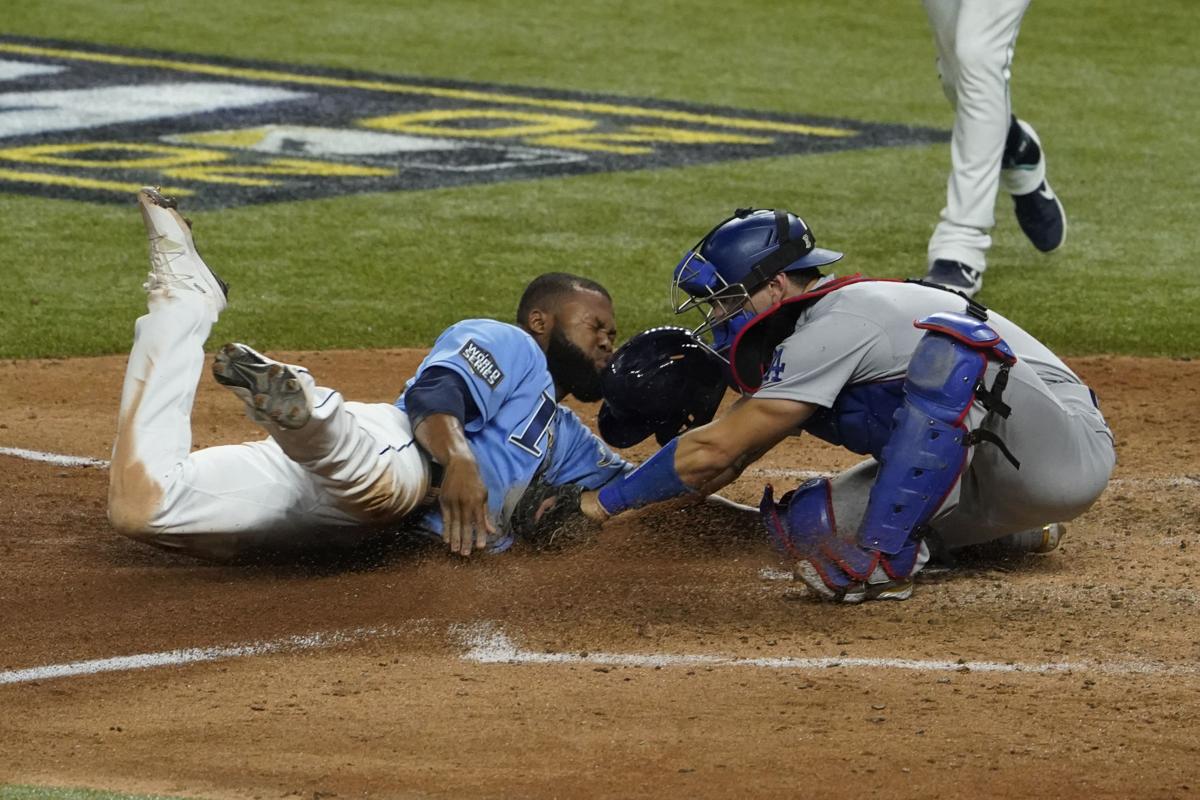 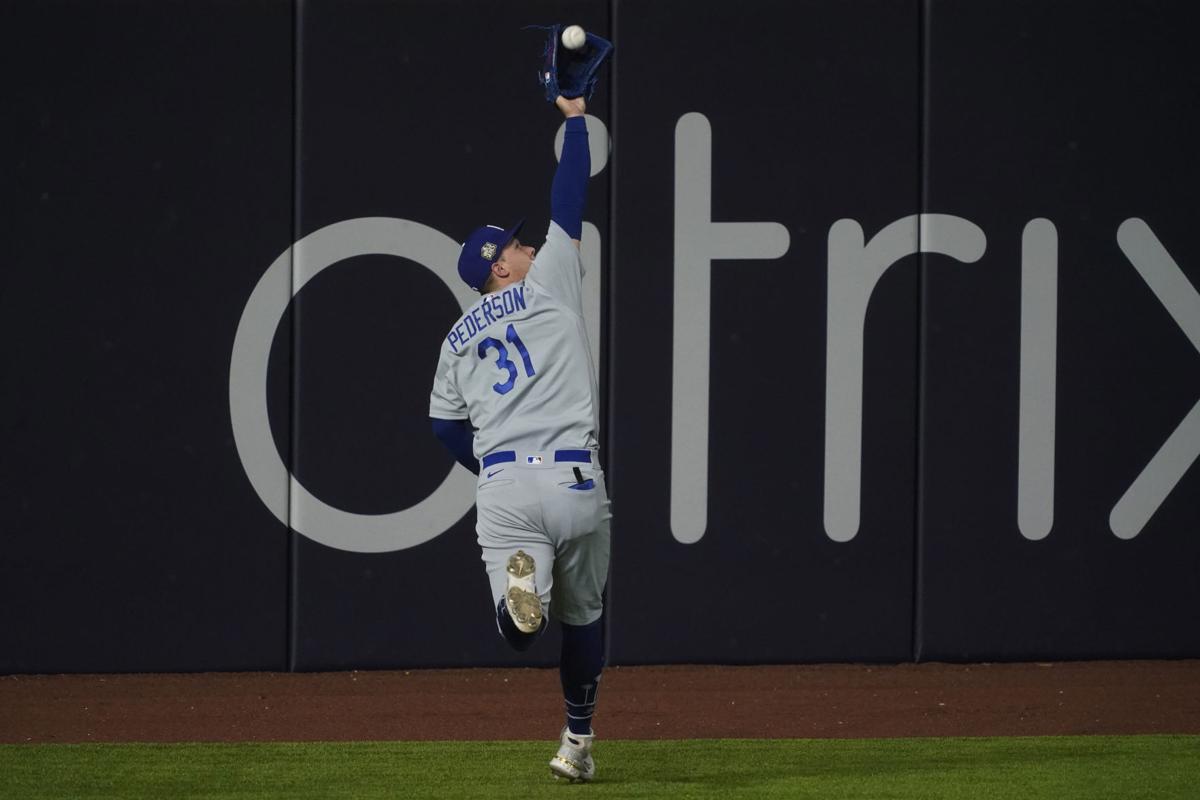 ARLINGTON, Texas — As much as Clayton Kershaw has dominated hitters throughout a glittering career, he has not silenced those who cite his lack of baseball's ultimate accomplishment.

With a gritty performance, plus one particular delivery home that will long be remembered, he hushed the skeptics and moved the Los Angeles Dodgers within a victory of their first World Series title since 1988.

“He’s a phenomenal pitcher on the biggest stage,” reliever Blake Treinen said after Kershaw beat the Tampa Bay Rays for the second time in six days, a 4-2 win Sunday night that gave the Dodgers a 3-2 Series lead. “I think a lot of credit goes to what he’s been able to do in this World Series for us.”

Kershaw even prevented the Rays from stealing the tying run.

Los Angeles was clinging to a one-run lead with runners at the corners and two outs in the fourth inning, and Kevin Kiermaier at the plate.

“Instinctually, I kind of did it,” Kershaw recalled.

He coolly and quickly backed off the rubber and calmly threw to catcher Austin Barnes, who grabbed the ball and got his mitt down on Manuel Margot’s outstretched hand while the runner’s helmet tumbled off and cut his own lip.

Kershaw’s formidable resume has lacked two of the most satisfying achievements: a win deep in the World Series and a championship ring. He has one and lifted himself and his team to the verge of the second.

His scraggly dark brown hair dangling with sweat, Kershaw was cruising when Dodgers manager Dave Roberts removed the 32-year-old in favor of right-handed reliever Dustin May after getting two outs on two pitches in the sixth inning.

The mostly pro-Dodgers fans in the pandemic-reduced crowd of 11,437 booed when Roberts walked to the mound, well aware of what happened with the bullpen the previous night, when closer Kenley Jansen wasted a ninth-inning lead in a stunning 8-7 loss.

No matter that some LA players tried to convince Roberts to leave in Kershaw, he was gone.

Those boos quickly turned to cheers as the Los Angeles rooters saluted Kershaw, a three-time NL Cy Young Award winner, as he walked to the dugout. Kershaw improved to 13-12 in postseason play, including 4-1 this year.

May, Victor Gonzalez and Treinen combined for two-hit scoreless relief. May got five outs, and Gonzalez stranded a pair of runners in the eighth by retiring Randy Arozarena and Brandon Lowe on flyouts.

He has been joined in the postseason bubble environment by wife Ellen, 5-year-old daughter Cali, nearly 4 Charley and 9-month-old Cooper, making this October run most memorable.

“Any dad just wants their kids to be proud of them," Kershaw said. "Cali told me she was tonight, so I’ll take that for sure.”

The Kershaws make their offseason home in the Dallas area.

“Last minute we were able to get a few extra nosebleed seats, my wife said, so we got to bring an extra 10 or so people here,” Kershaw said. “Don't want to say it’s working out the way that I wanted it to just because being at Dodger Stadium would be awesome, too, but to get that family and friends here, to get to have as packed house as it can be and basically it seems like it’s all Dodger fans, is very special.”

Treinen got three straight outs after Margot's single leading off the ninth, becoming the fourth Dodgers pitcher with a postseason save.

“Kersh, a lot of credit goes to him for what we’ve been able to do in this World Series,” Treinen said. “There’s a tough narrative on him. He’s a phenomenal pitcher on the biggest stage.”

Thirty of the previous 46 teams to win Game 5 for a 3-2 lead have won the title, but just six of the last 14. Teams that wasted 3-2 leads include last year’s Houston Astros.

Tony Gonsolin will start for the Dodgers on Tuesday, when Game 2 starter Blake Snell pitches for Tampa Bay.

This is the first time since 1997 that teams have alternated wins in the first five games.

With a 175-76 regular-season record, five ERA titles and an MVP, Kershaw ranks alongside Dodgers greats Sandy Koufax, Fernando Valenzuela and Orel Hershiser. He won World Series openers in 2017 and again this year, but he faltered in Game 5 in both 2017 and 2018 and has never won a title.

Kershaw shut down the Rays on two runs and five hits with six strikeouts and two walks. He is 2-0 with a 2.31 ERA in 15 2/3 innings over two starts in this Series with 14 strikeouts and three walks. Kershaw also set a career postseason record with 207 strikeouts, two more than Justin Verlander’s previous mark.

Provided a 3-0 lead, Kershaw allowed Tampa Bay to pull within a run in the third when Kiermaier singled, Yandy Díaz tripled on a ball down the right-field line that skipped past Betts and Arozarena singled. The 25-year-old Cuban rookie asked for the ball after his record 27th postseason hit, one more than San Francisco’s Pablo Sandoval in 2014.

“I didn’t have my stuff like I did in Game 1,” Kershaw said. “My slider wasn’t there as good as it was, so fortunate to get through there."

Kershaw escaped in the fourth after Margot walked leading off, stole second and continued to third when the ball got away from second baseman Chris Taylor for his second big error in two games. Hunter Renfroe also walked, but Joey Wendle popped out and Willy Adames struck out.

Margot went on his own, thinking the Dodgers weren't paying close attention, and became the first runner caught stealing home in the Series since Minnesota’s Shane Mack in Game 4 in 1991.

“I thought I was really close,” Margot said through a translator.

Glasnow allowed four runs and six hits in five innings, leaving him 0-2 with a 9.64 ERA in the Series. He sets records with nine postseason homers allowed and three wild pitches in a Series game, tying a mark with two wild pitches in an inning.

“It's definitely not my greatest month of baseball, that's for sure,” Glasnow said.

Walker Buehler struck out 10 over six innings in a pulsating performance, and Los Angeles beat the Tampa Bay Rays 6-2 on Friday night for a 2-1 World Series lead.

The World Series matchup between the Los Angeles Dodgers and Tampa Bay Rays is a rare meeting of baseball's best for the title.