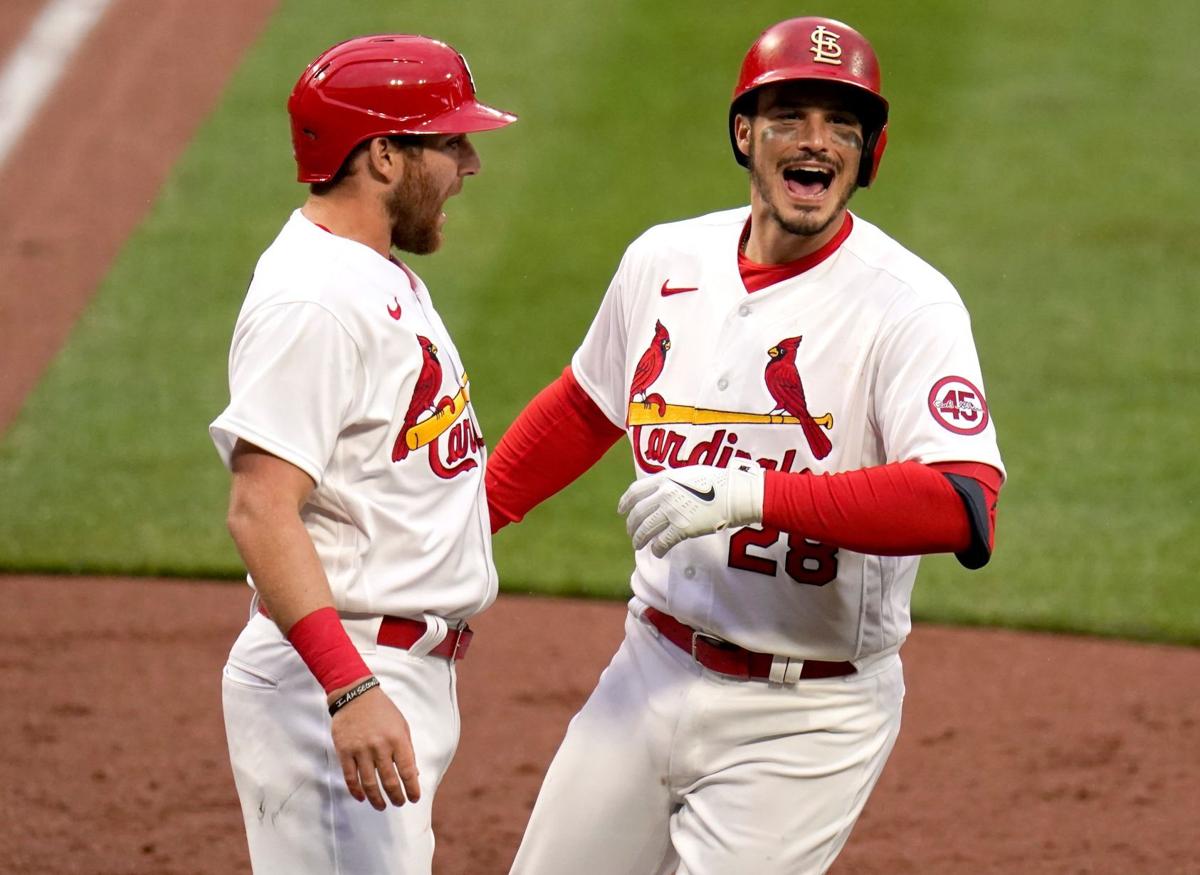 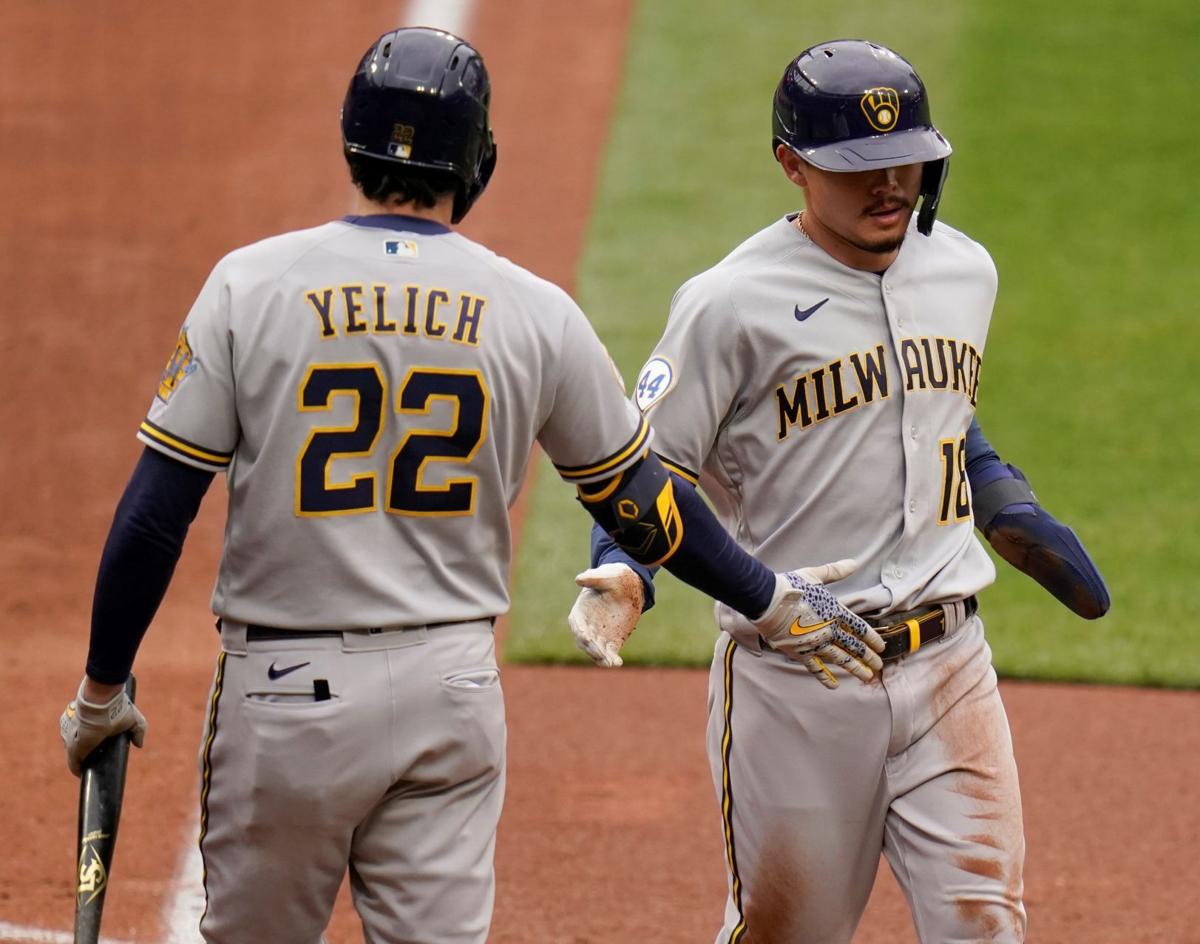 Brewers' Keston Hiura is congratulated by Christian Yelich after scoring during the third inning.

Arenado hit a tiebreaking, two-run homer in the eighth inning of his home debut with the Cardinals, lifting St. Louis over Milwaukee 3-1 Thursday as fans returned to Busch Stadium for the first time since 2019.

Arenado, a five-time All-Star acquired from Colorado on Feb. 1 after eight seasons with the Rockies, followed a walk to Austin Dean with the score 1-1. Arenado turned on the first pitch from Drew Rasmussen (0-1) — a 96.6 mph offering — and sent the ball 373 feet to left for his second homer this season.

Arenado pointed to the St. Louis dugout just before rounding first and screamed as he helped the Cardinals to their fourth straight win, setting off cheers from a crowd limited by coronavirus protocols to 13,328.

“Baseball is a magical game and it was magical today,” St. Louis manager Mike Shildt said. “The story created itself. What an amazing moment for a guy who loves to play the game. I get goosebumps just thinking about it.”

Arenado took his first curtain call after the homer, stepping out of the dugout to the delight of the crowd.

Arenado’s only struggle came early in the day when he found it hard to navigate the bowels of his new stadium. He struggled to find the home dressing room.

“I don’t know how much better a man can be at baseball,” Wainwright said. “Everything he brings to the table is exactly what we need.”

Wainwright started his sixth home opener, tying the franchise record set by the late Bob Gibson. The Cardinals wore patches with No. 45 on their left sleeves in honor of Gibson, the Hall of Famer who died Oct. 2.

Wainwright, a 39-year-old righthander, allowed one run and five hits in five innings with six strikeouts and two walks.

“The first three innings I felt completely out of sorts,” Wainwright said. “The ball was flat.”

Alex Reyes finished the six-hitter for his third save, allowing a leadoff single to Omar Narváez in the ninth and stranding him at third when Daniel Robertson hit a game-ending flyout.

Burnes gave up one hit in six scoreless innings, struck out nine and walked none.

“The ball kept coming out great,” said Burnes, who fanned 11 while allowing one hit over 6⅓ innings in a 2-0 loss to Minnesota on Saturday.

Keston Hiura doubled leading off the third to break an 0-for-20 slide to start the season and scored when Wainwright’s pickoff attempt sailed into center field and Dylan Carlson overran the ball on a play scored a double error.

Tyler O’Neill had a tying infield single off Eric Yardley in the seventh.

Milwaukee second baseman Kolten Wong received a standing ovation leading off the game. Wong spent eight years with the Cardinals before St. Louis declined his option last fall. He became a free agent and signed with the Brewers.

Brewers right-hander Justin Topa was moved to the 60-day injured list due to elbow discomfort.

Cardinals first baseman Paul Goldschmidt was held out of the game due to lower back tightness.

Brewers' Freddy Peralta and bullpen hold Cubs to 1 hit, even series at Wrigley

Travis Shaw's three-run homer in the first inning is one of just five hits for Milwaukee.

Brad Boxberger gets the final out after Chicago loads the bases.

Chicago belts three in the fourth inning to take a 4-0 lead at Wrigley Field.

Brewers' Keston Hiura is congratulated by Christian Yelich after scoring during the third inning.