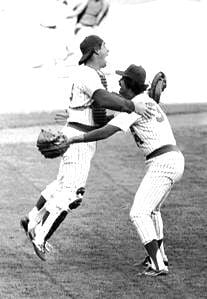 Brewers catcher Ted Simmons leaps into the arms of pitcher Rollie Fingers after Milwaukee defeated Detroit, 2-1, to win the American League East in Milwaukee on Oct. 3, 1981.

Milwaukee Brewers catcher Ted Simmons, center, turns and gives the number one sign to the crowd as he and Brewers shortstop Jim Gantner, left, leave the field after winning a World Series game, Saturday, Oct. 16, 1982, Milwaukee, Wi. The Brewers won the game, 7-5, to tie the Series with St. Louis. (AP Photo)

COOPERSTOWN, N.Y. — Maybe it’s because he had more than 21 months to prepare his remarks.

Former St. Louis Cardinals and Milwaukee Brewers star catcher Ted Simmons was as smooth behind the microphone on Wednesday as he was with his swing from both sides of the plate when he piled up 2,472 hits in a career that finally brought him to his new family more than 20 years after he probably should have joined it already.

In a 21-season big-league career, the first 13 with the Cardinals before spending five with Milwaukee and then the last three with Atlanta, Simmons never once batted first in a starting lineup. But, sporting a red tie to go with his charcoal suit, he was the leadoff hitter among the four 2020 honorees Wednesday at the belated Hall of Fame induction that was pushed back because of the coronavirus pandemic.

There was an estimated crowd of 20,000 outside the Clark Sports Center for the ceremony (there were no 2021 inductees), which finished about 45 minutes before heavy rains came.

Simmons said later in a Zoom meeting that he might not have been as composed as he appeared. Talking to fellow Hall of Famer Larry Walker before the ceremony, Simmons said, “I only felt like this one other time in my life. I felt like the morning of the seventh game of the (1982) World Series, with that kind of anxiety and that kind of anticipation. Milwaukee and St. Louis. I felt the very same way this morning.”

Simmons made sure he thanked his amateur coaches and the great George Kissell, the longtime Cardinals’ farm system guru.

He made it clear that he wouldn’t have wanted to go into the Hall of Fame however long it took with anyone but the late Marvin Miller, who was the executive director of the players’ association and revolutionized the game by helping players gain their contractual freedom.

“I could not be more proud to enter this great Hall with this great man,” Simmons said.

Don Fehr, who succeeded Miller as chief of the players’ association, later cited Simmons as one of the players of whom Miller was most proud because Simmons stood up for his own rights, for instance, refusing to sign a contract until well into the 1972 season “against all of baseball history,” Fehr said.

“During the ’70s, Ted was one of the most influential players that there was,” Fehr said. “He was present at the creation we have now.”

Simmons thanked former players Curt Flood, briefly a teammate of Simmons with the Cardinals; Jim “Catfish” Hunter and Andy Messersmith for taking different steps that enabled any player with more than six years’ of major-league service to have a chance to be free agents.

Later, he thanked former Milwaukee Brewers teammate Robin Yount, himself a Hall of Famer, who helped convince others on the Modern Baseball Era committee voting group that Simmons belonged here in Cooperstown.

At the end he thanked Maryanne, his wife of more than half a century and “my equal,” Simmons said.

A high school star in Detroit, Simmons said he grew up idolizing Tigers star Al Kaline, one of 10 Hall of Famers who have died in the past year.

“He had no idea how much he impacted my life or what a role model he became for me,” Simmons said. “As I stand before you as a man, he remains my hero today.”

“There are many roads to Cooperstown,” said Simmons, who dropped off the Baseball Writers’ Association of America ballot after one year. “For some, it comes quickly. For others, it takes a little time. For those like myself, the path is long and even though my path fell on the longer side, I would not change a thing.”

Simmons spent only a couple of seasons in the Cardinals’ system after signing in 1967, before getting to the big leagues at the end of the 1968 season.

“Joe Cunningham, my manager at the (Class) A level was the first major-league hitter to tell me that I would become one myself. I believed him because he had been one himself,” Simmons said.

But nothing happened without Kissell’s blessing.

“He had the greatest influence on me,” Simmons said. “He taught me fundamental baseball and how to play to win. I also learned from George how to win and lose with grace. He gave me my first test of humility. Nobody came through the Cardinals’ organization to St. Louis without Kissell’s blessing. Nobody. And his blessing had to be earned. If George Kissell said no, you did not go.”

Simmons could look behind him Wednesday and see former Milwaukee teammates Yount, Paul Molitor and Rollie Fingers but there were few former Cardinals teammates on stage, with Bob Gibson and Lou Brock having died in 2020 and Hall of Fame manager Red Schoendienst before that.

Joe Torre and Simmons were teammates for several years in St. Louis and Orlando Cepeda played briefly with Simmons in 1968.

After Simmons’ playing career ended, he was player development director for the Cardinals when Dal Maxvill was the general manager. He was general manager of the Pittsburgh Pirates and a scout and executive with several other clubs.

He also said he drew much from two particular players, former Cardinals and Brewers teammate Pete Vuckovich and Hall of Fame reliever Bruce Sutter, who was unable to be here Wednesday. Simmons and Sutter, a teammate of Simmons with the Atlanta Braves, long have bonded. In fact, they were a part of one memorable play when the Cardinals’ Simmons, after homering off Chicago Cubs relief ace Sutter to tie a game in the ninth inning in Busch Stadium, was ejected as he stepped on home plate for tipping his cap to home-plate umpire Paul Runge after the two had disagreed previously on Runge’s strike zone.

Simmons said he believes baseball fans in the future would see a return to a more complete game where the strikeout, walk and home run are not just the three true outcomes.

“Hitters will begin to beat the defensive shifts and the pendulum will swing back,” he said.

Simmons also thanked actor Jon Hamm and Hamm’s family, who were on hand, for their friendship.

“I have lived within many families and am about to step into baseball’s most elite family — and I am incredibly humbled,” he said.

And to the family member he has known the longest . . .

“Maryanne. My partner. My companion. My equal,” Simmons said.

Then, his voice wobbling just for an instant, Simmons said, “She remains the same girl who listened with me not so long ago to the lyrics written by some pretty fabulous folks (the Beatles) back in the day. And those words, “And the love you take is the love you make.

“Peace and love, sweetheart. We finally got here,” Simmons said in conclusion.

Later, he said, “That lyric has been with us a very long time. When I started contemplating the speech, I knew one way or another that when it got time to talk about Maryanne, that lyric was going to play.”

Outfielder Walker, who spent the final two of his 18 seasons with the Cardinals, had 26 homers and 79 runs batted in covering 144 games.

“I only spent a little more than a year in your uniform but you made me feel like it was many, many more,” said Walker of the franchise and its fans. “It was a thrill every time I wore the birds-on-the-bat jersey . . . in front of that sea of red. Thank you, Cardinal Nation, for welcoming me into your family.”

Walker spent six seasons with Montreal and 10 seasons with Colorado in Coors Field, where he batted a robust .381 with a 1.172 OPS. But, as an away player, he hardly was an out, batting .278 with an .865 OPS. He won three National League batting titles and one Most Valuable Player award. Walker is the first Canadian-born position player to make the Hall of Fame and only the second Canadian player at all, joining pitcher Ferguson Jenkins.

Considered a “five tool player,” Walker admitted he didn’t always know how to play the game. He played mostly hockey growing up in Maple Ridge, British Columbia and there wasn’t any high school ball in his area. He was mostly limited to fast-pitch softball, which he played with his father, Larry, and three brothers, Barry, Cary and Gary with mother Mary cheering from the stands.

“The rhyming family,” he said although some of the brothers and their families weren’t here Wednesday because of COVID, Walker said.

Playing professionally in his first season with nearby Utica, managed by Ken Brett (George’s brother), as an Expos farmhand, Walker was on first when the hit-and-run was called. The hitter lined out and Walker was past second base when he finally picked up the third-base coach telling at him to “get back.”

Walker, indeed, hustled his way back to first, “easily safe,” he said. But Walker was called out and he put up a beef with the first-base umpire. Brett, coaching first, grabbed his arm and said, “Larry, you’re out.”

“I argued with him, too,” Walker said.

But he added: “As it turns out, getting back to first base, you do not cut right behind the pitcher’s mound through the infield, which I did. I already had touched second. Why the heck did I have to touch it again?

Despite his career accomplishments, Walker said, “I’ve never considered myself a Hall of Famer about anything. I actually see myself as an average guy.

“But to stand on this stage right now and tell you that I’m feeling average would be a complete lie. My feet have not touched the ground all day.”

The Cardinals held a ceremony to unveil a statue to Hall of Fame inductee Ted Simmons on Saturday, July 31, 2021, at Busch Stadium on the corn…

Photos: A look at the career of Ted Simmons, baseball's newest Hall of Famer

Ted Simmons, one of the most accomplished hitting catchers in MLB history, was elected into baseball's Hall of Fame on Sunday.

The Man, Gibby, Ozzie and more: Meet the Cardinals in baseball's Hall of Fame

Here's a look back at the players and managers who entered the National Baseball Hall of Fame as Cardinals.

Brewers catcher Ted Simmons leaps into the arms of pitcher Rollie Fingers after Milwaukee defeated Detroit, 2-1, to win the American League East in Milwaukee on Oct. 3, 1981.

Milwaukee Brewers catcher Ted Simmons, center, turns and gives the number one sign to the crowd as he and Brewers shortstop Jim Gantner, left, leave the field after winning a World Series game, Saturday, Oct. 16, 1982, Milwaukee, Wi. The Brewers won the game, 7-5, to tie the Series with St. Louis. (AP Photo)