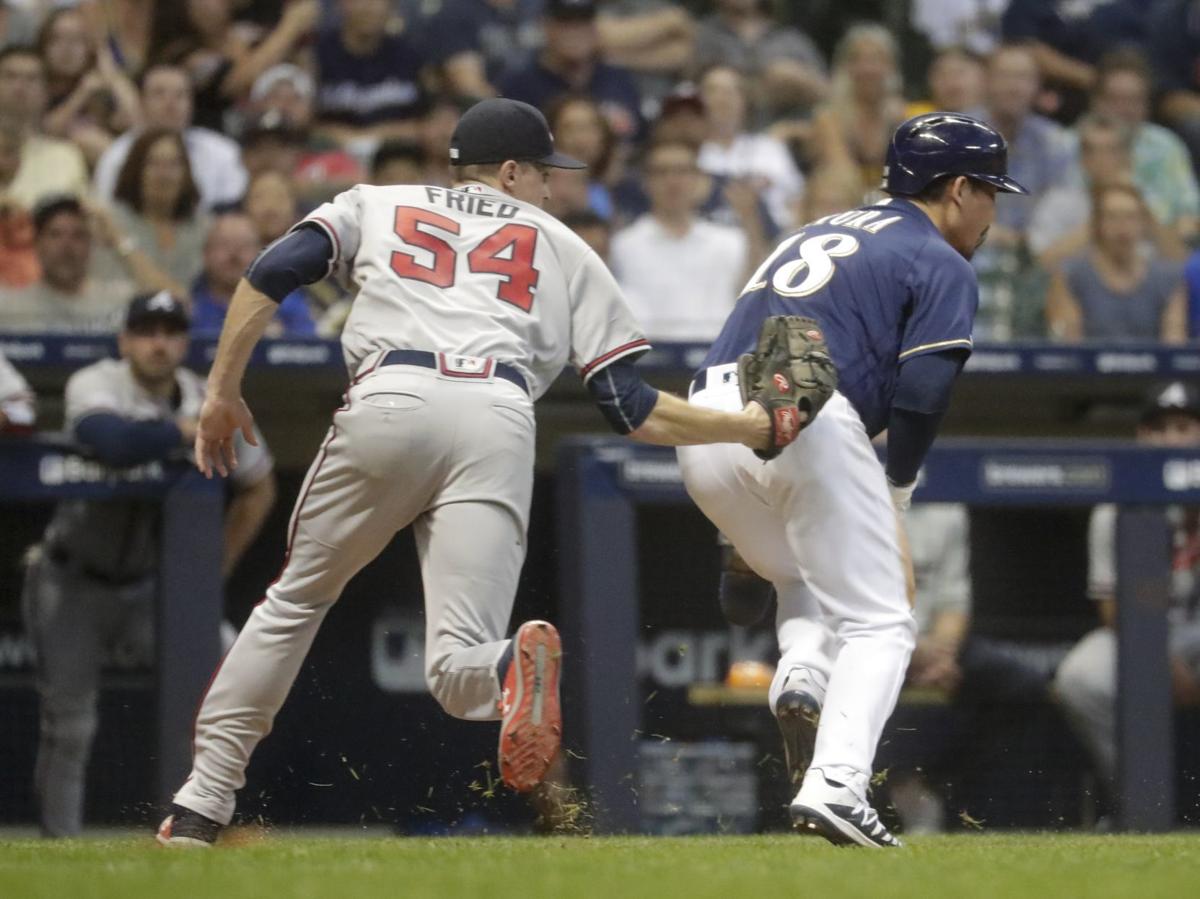 Braves pitcher Max Fried tags out Brewers' Keston Hiura, who was caught in a rundown between third and home in the fifth inning Monday night. 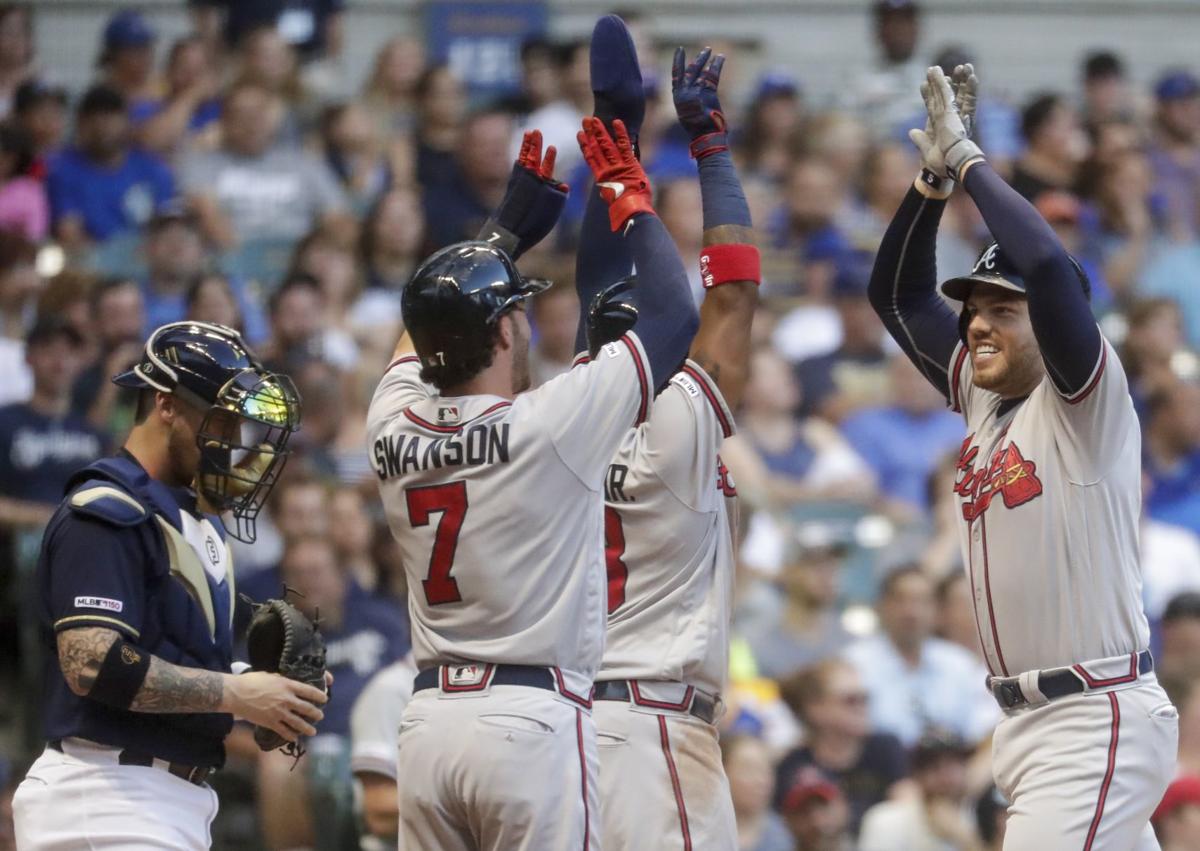 Braves' Freddie Freeman is congratulated by Dansby Swanson and Ronald Acuna Jr. after hitting a three-run home run in the fourth inning. 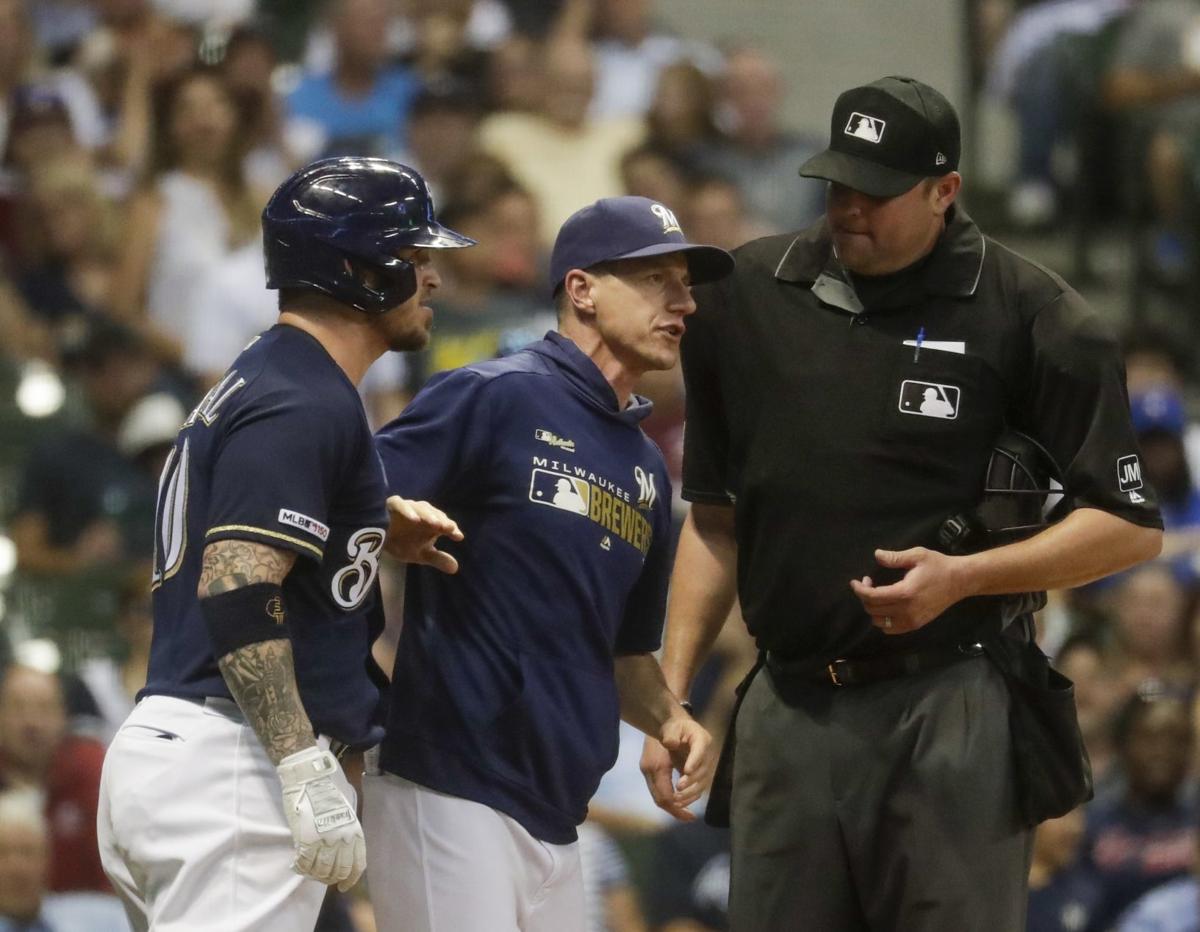 Brewers manager Craig Counsell separates Yasmani Grandal from home plate umpire Jordan Baker in the sixth inning. Grandal was ejected after being called out on strikes.

MILWAUKEE — After watching his team strand seven runners, Milwaukee manager Craig Counsell recited a plan to snap the Brewers out of their funk.

“We’ve just got to make plays,” Counsell said after Milwaukee lost 4-2 to the Atlanta Braves in the opener of a three-game series Monday night at Miller Park.

“That’s what it comes down to.”

Freddie Freeman hit his 25th home run of the season, Max Fried pitched five scoreless innings and the Braves’ relievers hung on for the victory.

The win marked the fifth straight for the NL East-leading Braves, who are a season-best 21 games over .500.

One of the more noticeable mistakes by the Brewers came in the fifth inning. Trailing 3-0, rookie second baseman Keston Hiura hit a leadoff double and stole third base. Orlando Arcia followed with a grounder to Fried, who tagged Hiura out in a rundown between third and home.

“(Hiura) got aggressive. It was a tough play because it was on the other side of the pitcher,” Counsell said. “He got over-aggressive.”

Fried (10-4) gave up three hits and struck out five in just 78 pitches. The left-hander is now 2-0 with 11 shutout innings against Milwaukee this year. Luke Jackson pitched the ninth for his 17th save of the season.

Freeman put Atlanta on the board first in the fourth with a three-run homer to center field. The blast scored Ronald Acuña Jr. and Darby Swanson after each reached on a base hit.

The Braves improved to a major league-best 40-17 since manager Brian Snitker moved Acuña to the top of the order on May 10.

Brewers right-hander Adrian Houser (2-4) fell to 0-4 as a starter this season after allowing four earned runs on eight hits in six innings.

Ryan Braun hit his 13th home run of the season in the sixth and Hiura brought home the Brewers’ other run on a deep drive to center that fell just beyond the outstretched glove of Acuña. The RBI triple pulled Milwaukee to within 3-2.

Austin Riley singled on a fly ball off Braun’s glove in the seventh, scoring Ozzie Albies.

Brewers outfielder Christian Yelich had two hits and added a stolen base, his 22nd of the season.

“Look, two runs isn’t enough,” Counsell said. “When you’ve got a runner on third, you’ve got to get him in. That’s part of making plays.”

The two-time All-Star hasn’t pitched for the Brewers since being placed on injured list June 1 with left arm fatigue.

Burnes (1-5), who suffered his fifth loss of the season Sunday after allowing four earned runs on four hits while facing just four batters, said his shoulder was bothering him for four or five days but Sunday was the first day he felt it while on the mound.

Counsell said he doesn’t believe Burnes’ injury is serious but said he’ll shut him down for what he doubts will be a long time.

Woodruff lost his last start July 4 in Cincinnati after allowing just one earned run in six innings. Wilson will be recalled from Class AAA Gwinnett.

Brewers hold on to beat Braves 5-4

Christian Yelich hits his 34th home run of the season and Josh Hader gets the save as Milwaukee takes two of three games from Atlanta.

The game was a pitchers' duel tied at 1 until Orlando Arcia's run-scoring single in the eighth inning, part of a three-run rally for the Brewers.

Tyler Saladino had his first career grand slam and the Brewers beat up on Arizona’s bullpen for the second straight game to rally for a 7-4 win Sunday.

Eugenio Suarez hit a pair of home runs, including a two-run, go-ahead shot in the ninth inning off Jeremy Jeffress, as the Cincinnati Reds rallied for a 6-5 victory at Miller Park.

Braves pitcher Max Fried tags out Brewers' Keston Hiura, who was caught in a rundown between third and home in the fifth inning Monday night.

Braves' Freddie Freeman is congratulated by Dansby Swanson and Ronald Acuna Jr. after hitting a three-run home run in the fourth inning.

Brewers manager Craig Counsell separates Yasmani Grandal from home plate umpire Jordan Baker in the sixth inning. Grandal was ejected after being called out on strikes.