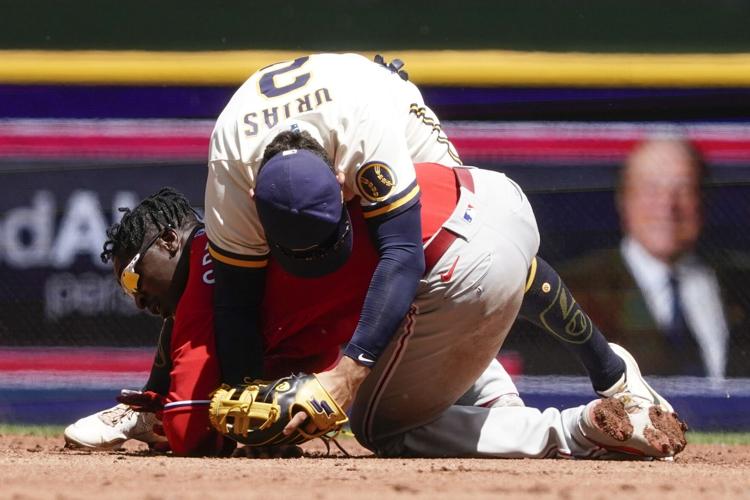 Brewers' Luis Urias gets tangled with Phillies' Didi Gregorius during the second inning Thursday at American Family Field. Gregorius broke up a double play on a ball hit by Bryson Stott. 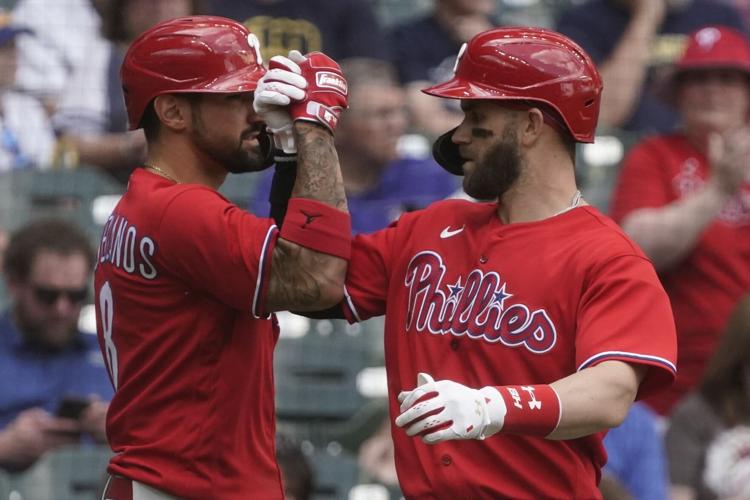 Phillies' Bryce Harper is congratulated by Nick Castellanos after homering during the seventh inning. Philadelphia hit nine home runs in the three-game series.

At 6-0, Thomson is off to the best start by a first-time major league manager since Boston's Joe Morgan won his first 12 games in 1988, the Elias Sports Bureau said.

"We just got to keep going," Harper said, "doing the things we're doing, playing the game the right way, not overlook anybody that we play and just take it one game at a time."

The NL Central-leading Brewers lost their season-worst sixth in a row.

"We just can't get anything going, unfortunately," Brewers manager Craig Counsell said. "You get kind of knocked down, and you got to grind through it and keep going."

It was the second consecutive three-game sweep for the Phillies under Thomson. He took over last Friday after manager Joe Girardi was fired, and Philadelphia swept the Los Angeles Angels before heading to Milwaukee.

Didi Gregorius singled, tripled, doubled and drove in a run for Philadelphia.

Andrew McCutchen singled home a run in the ninth to pull Milwaukee within five runs. With two on and two outs, Jace Peterson then was initially ruled safe on an RBI single, but was called out after a replay reversal.

Reigning NL Cy Young Award winner Corbin Burnes (3-4) and Phillies starter Zach Eflin were both out of the game by the end of the fifth.

"Being able to get Corbin out of there in the fifth inning at 100 or whatever pitches he threw, I thought we battled as best we could and got into their bullpen as best as we could," Harper said. "To be able to come here and sweep in their ballpark, that's huge for us."

Thomson agreed with Harper about the importance of chasing Burnes, who threw a season-high 113 pitches, 67 for strikes.

"The biggest thing was that we just laid out good at bats on Burnes and put his pitch count way up there and got him out of the game," Thomson said. "Then, they got to use the weaker part of the bullpen."

Harper homered for the second straight day, connecting off Brad Boxberger for his 15th of the season, a solo drive in the seventh for a 4-2 lead.

Schwarber hit his 15th home run, a two-run drive off Trevor Kelley in the eighth. Herrera, who homered in a 10-0 romp Wednesday night, added a two-run drive in the ninth.

Seranthony Dominguez (3-1) pitched one inning for the win.

"The bullpen did a great job all the way through," Thomson said of the five relievers he used in the game.

Eflin walked three to snap his streak of 33 consecutive starts with two walks or fewer since Aug. 29, 2020. He allowed a run and four hits in four innings.

"All sides of the ball, everybody is playing well," Eflin said. "The boys did a great job of picking me up today."

Burnes walked a career-high four and gave up three runs, one of them earned, and three hits in 4 1/3 innings. He struck out eight and left after throwing a season-high 113 pitches.

"I think both starting pitchers had the same same day, really," Counsell said. "I think the hitters did a pretty good job on both sides. I think there was a ton of close pitches that didn't get called strikes and extended innings."

Harper by the book

He now has an NL-best 35 extra-base hits.

Brewers: Adames started at short for the second straight game after being reinstated Wednesday from the 10-day injured list (high left ankle sprain). He went 1-for-4. … Catcher Omar Narváez should come off the injured list (COVID-19) soon. “He’s been cleared,” Counsell said. “So, he will fly with us to Washington.” Narváez was placed on the list June 2.

Brewers: Left-hander Aaron Ashby (1-4. 3.13 ERA) takes the mound in the opener of a three-game road series against Erick Fedde (3-4, 4.88) and the Washington Nationals.

Alec Bohm and Matt Vierling homer off Josh Hader in the ninth inning and the Phillies hang on for a 3-2 victory at American Family Field.

Jake Cronenworth provided the decisive hit as the Padres won three of four in the series.

Brewers held to 1 hit, shut out by Padres

Joe Musgrove lost his bid for his second no-hitter when Kolten Wong doubled with two outs in the eighth inning Friday night.

Washington produced 19 hits en route to an 11-5 victory over visiting Milwaukee in the opener of the three-game series.

Milwaukee has been outscored 57-20 during its skid.

An error in the eighth sets up the go-ahead run and Hunter Renfroe is thrown out at home in the ninth.

Brewers' Luis Urias gets tangled with Phillies' Didi Gregorius during the second inning Thursday at American Family Field. Gregorius broke up a double play on a ball hit by Bryson Stott.

Phillies' Bryce Harper is congratulated by Nick Castellanos after homering during the seventh inning. Philadelphia hit nine home runs in the three-game series.