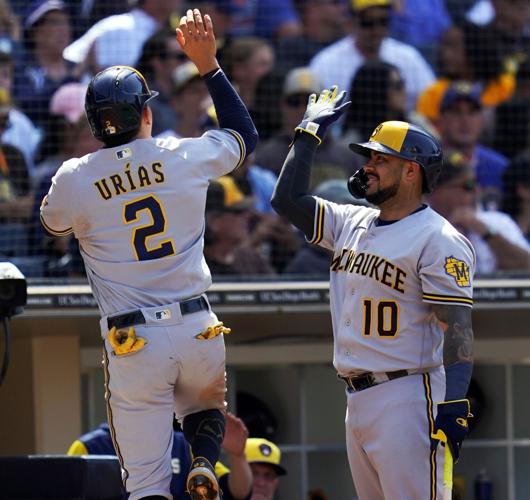 Brewers' Luis Urias is greeted by Omar Narvaez after scoring on a double by Rowdy Tellez during the seventh inning Wednesday in San Diego. 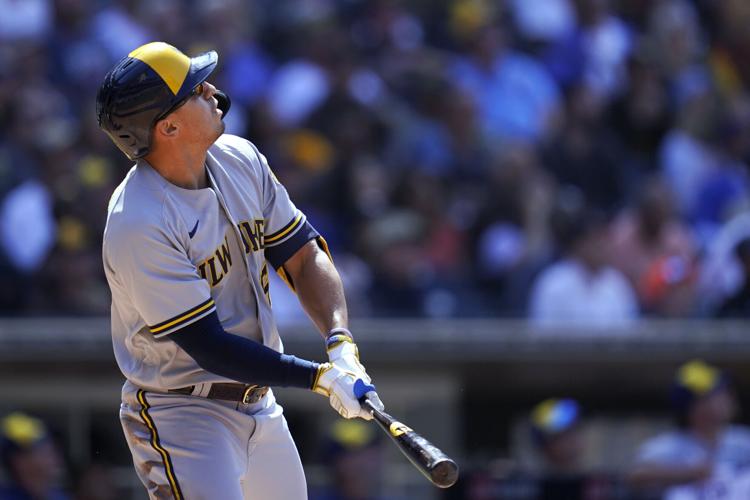 SAN DIEGO — Kolten Wong may have saved the game with his flashy glovework. Luis Urías may have saved it with a deft slide into third base past Manny Machado’s tag.

Devin Williams definitely did save it, closing out a solid performance by the bullpen in the Milwaukee Brewers’ 2-1 victory against the San Diego Padres on Wednesday.

It was the first time Williams, the 2020 NL Rookie of the Year and Reliever of the Year, pitched on three consecutive days. He threw a perfect ninth for his second save in two games and his fourth this season. Williams also pitched the ninth in a tie game Monday that the Brewers lost 3-2 in the 10th.

The NL Central-leading Brewers are without star closer Josh Hader, who went on the family medical emergency list before Monday night’s game to be with his pregnant wife.

“That’s what a unit does, is they pick each other up,” manager Craig Counsell said. “We’re missing Josh and a lot of guys delivered some great stuff.”

Former Padres pitcher Luis Perdomo (1-0) got four outs in relief of starter Aaron Ashby and another former San Diego pitcher, Brad Boxberger, struck out the side in the eighth.

Perdomo “got four outs for us and did it really well, went through the top of their order in the seventh and then Box had a great inning,” Counsell said. “And then Devin on three days in a row closed it out with just a bunch of good pitches. He kept making pitches.”

Counsell and his staff spoke with Williams earlier in the day “and he said he felt good. I said ‘Well then, we’ll take it to the next step and go through your throwing program,’ and he got more (convinced) after his throwing program and today was a good day to go for it and it worked out well.”

Rowdy Tellez doubled off Yu Darvish to bring in the tying run in the seventh inning and Tyrone Taylor followed with a sacrifice fly.

Darvish (4-2) was brilliant in holding Milwaukee to one hit through six innings, but the Brewers finally broke through in the seventh with two hits, a walk and the sacrifice fly.

Urías, another former Padres player, drew a leadoff walk and took third on Andrew McCutchen’s single, sliding headfirst and touching the base just ahead of Machado’s tag. The Padres challenged, but the play was upheld. Tellez then doubled and Taylor hit his sac fly to chase Darvish.

That outburst made a winner of Perdomo and got Ashby off the hook for what would have been a loss against one of his uncle’s former teams.

The Padres scratched out an unearned run against Ashby, whose uncle, Andy, watched from the second row near the Padres dugout and stood and applauded when his nephew was removed with two outs in the sixth. Andy Ashby pitched for the Padres from 1993-99 and again briefly in 2004.

“It was awesome having him here. My whole family’s out here right now,” Ashby said. “It’s a real fun time. This is where he spent a lot of time in his career and a lot of successful time in his career. So to be able to come back here and pitch is something I’ve looked forward to for a long time and it’s cool.”

Counsell said Ashby “was in control. He lost a little bit of command for a couple of hitters in the third but other than that it was really good stuff. He had every pitch working.”

Wong, the second baseman, made a brilliant play on Machado’s grounder in the seventh. He dove to his right to snag the ball and in the same motion flipped it with his glove back to Urias, the shortstop, to force Cronenworth.

“Luckily I was able to lay out, catch it and I had it in the right part of of my glove where I felt like I controlled the flip and I made a pretty decent flip,” said Wong, a Gold Glove Award winner with St. Louis in 2019 and 2020.

Said Urías: “Honestly, I think that saves the game. Maybe we would have had men on third and first and it wouldn’t be the same situation. Obviously it was pretty cool. It was sick.”

Brewers: Left-hander Eric Lauer (4-1, 2.16 ERA) is scheduled to start Thursday night in the opener of a four-game series at St. Louis, which will counter with right-hander Adam Wainwright (5-3, 2.87).

Key: San Diego is 0-for-6 with runners in scoring position.

Tyrone Taylor hit a three-run home run in the sixth inning as Milwaukee defeated San Diego 4-1 to even the series at one game apiece.

Brewers open road trip with loss to Padres in 10 innings

With the bases loaded and two outs in the 10th inning, rookie José Azocar lined a single into center field to bring in Manny Machado and lift San Diego over Milwaukee 3-2 on Monday night.

The Nationals broke out of their doldrums Sunday in an 8-2 victory over the Brewers, who lost Freddy Peralta to shoulder tightness in the fourth inning.

Andrew McCutchen and Luis Urias homer to support the right-hander in a 5-1 victory over the Nationals.

Josh Hader moves to 16-for-16 in save chances as Brewers win 3rd straight, edging Cardinals 4-3

Brandon Woodruff allowed two runs and two hits, then was removed while warming up for the fifth inning because of right ankle inflammation.

Right-hander Corbin Burnes struck out 11 in seven innings as Milwaukee earned a split of the four-game series with St. Louis.

Brewers' Luis Urias is greeted by Omar Narvaez after scoring on a double by Rowdy Tellez during the seventh inning Wednesday in San Diego.