Thanks for reading! Log in to continue.
Enjoy more articles by logging in or creating a free account. No credit card required.
Log in Sign up Become a Member
You have permission to edit this article.
Edit

Assembly Speaker Robin Vos, R-Rochester, has emerged as the most powerful Republican in state government after the midterm election. Here’s how he got there:

1850s: Relatives settle in Racine County, where they work as dairy farmers.

1968: Born in the city of Burlington in Racine County.

1989-1991: Attends UW-Whitewater, and is appointed a student representative on the UW Board of Regents by Tommy Thompson. While there his roommate is future White House chief of staff Reince Priebus. He graduates with a double major in political science and public relations.

1994: Elected a Racine County Board Supervisor, serving for 10 years.

June 2004: Announces intent to run for the Assembly District 63 seat. He runs unopposed, winning the seat in November.

August 2005: Leads Republican lawmakers in calling for halving the gas tax from Sept. 1 to Dec. 31 as part of a gas tax holiday.

2007: Votes to create the nonpartisan Government Accountability Board.

November 2010: After winning an uncontested race for his seat, named a co-chairman of the Legislature’s powerful Joint Finance Committee.

2012: Authors and helps pass a bill that would change the recall law to limit its use to crimes and malfeasance. The legislation dies in the Senate.

August 2012: Legally separates from wife, agreeing to pay her $250,000 over five years plus other expenses in exchange for her not speaking publicly about their marriage and not changing her Facebook marital status until after the 2012 election.

October 2012: Racine County Sheriff’s Department investigates a voter fraud complaint against his estranged wife who lived in Idaho. The complaint is dismissed because “she was out of the state for temporary purposes with an intent to return.”

November 2012: After winning re-election over Democrat Kelley Albrecht, is named speaker of the Assembly by a unanimous voice vote.

November 2014: Defeats Bryn Biemeck in the Republican primary, and is re-elected to another term, defeating Democrat Andy Mitchell in the general election.

July 2015: In the face of withering criticism, is forced to retreat from a provision he drafted and added to the state budget that would have gutted the state’s open records law.

August 2017: Takes a free trip with lobbyists to London paid for by the conservative GOPAC Education Fund.

September 2017: After attending a leadership summit in France paid for by the National Conference of State Legislatures, marries Michelle Litjens, a former state lawmaker, in Italy.

December 2017: Along with Republican legislative leaders, calls for the resignations of state Elections and Ethics officials.

April 2018: Announces he will not run for the 1st Congressional District seat vacated by Paul Ryan. 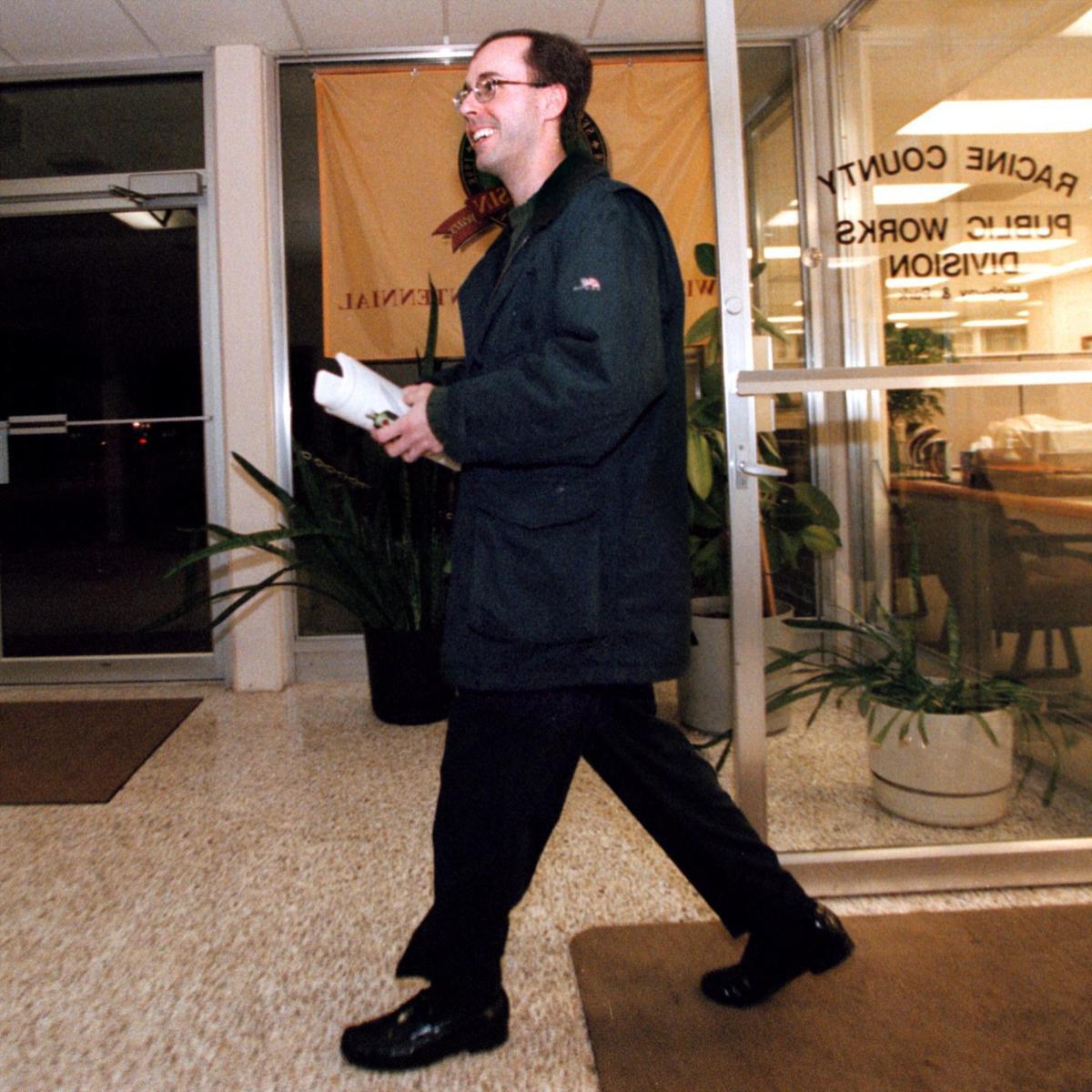 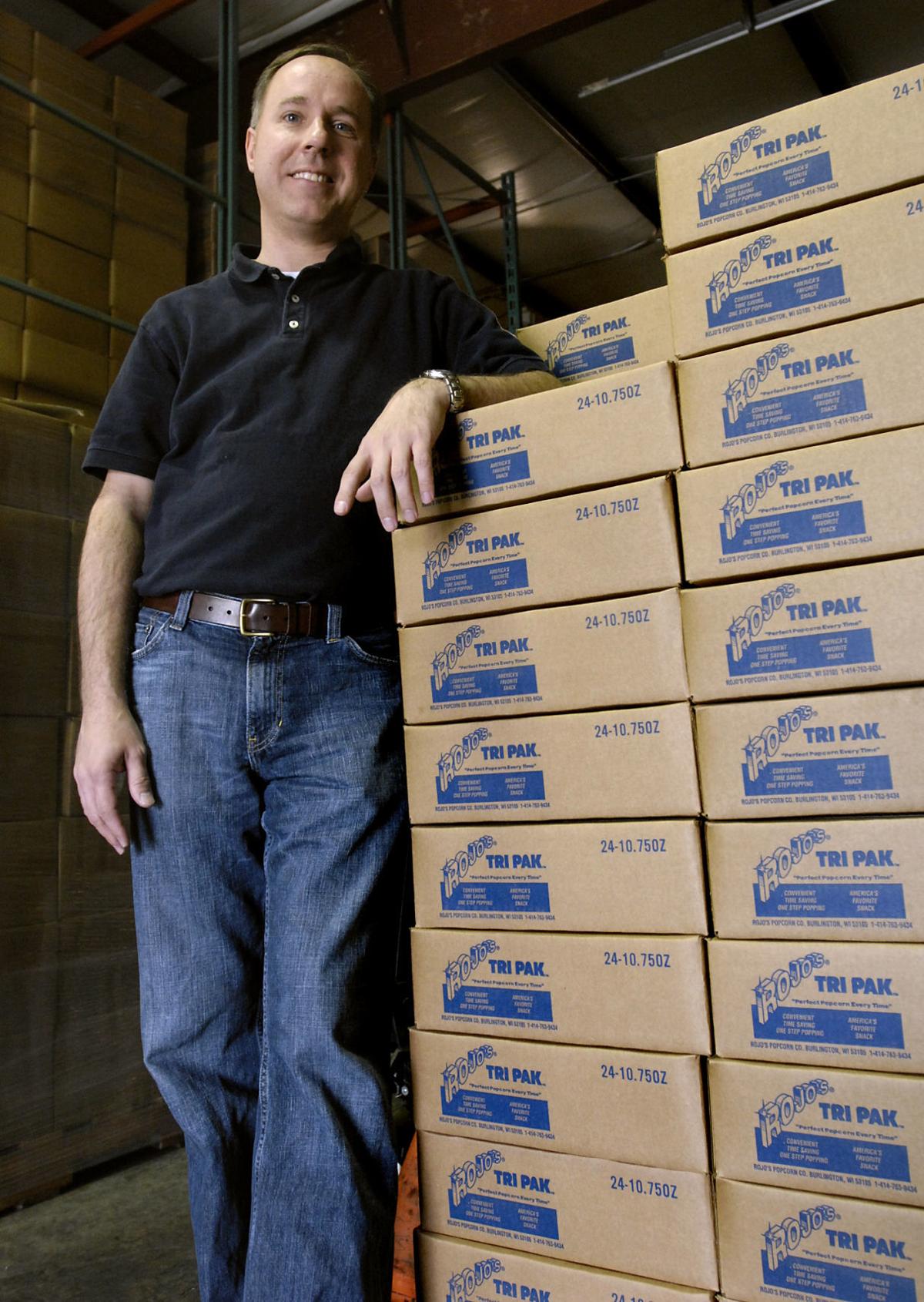 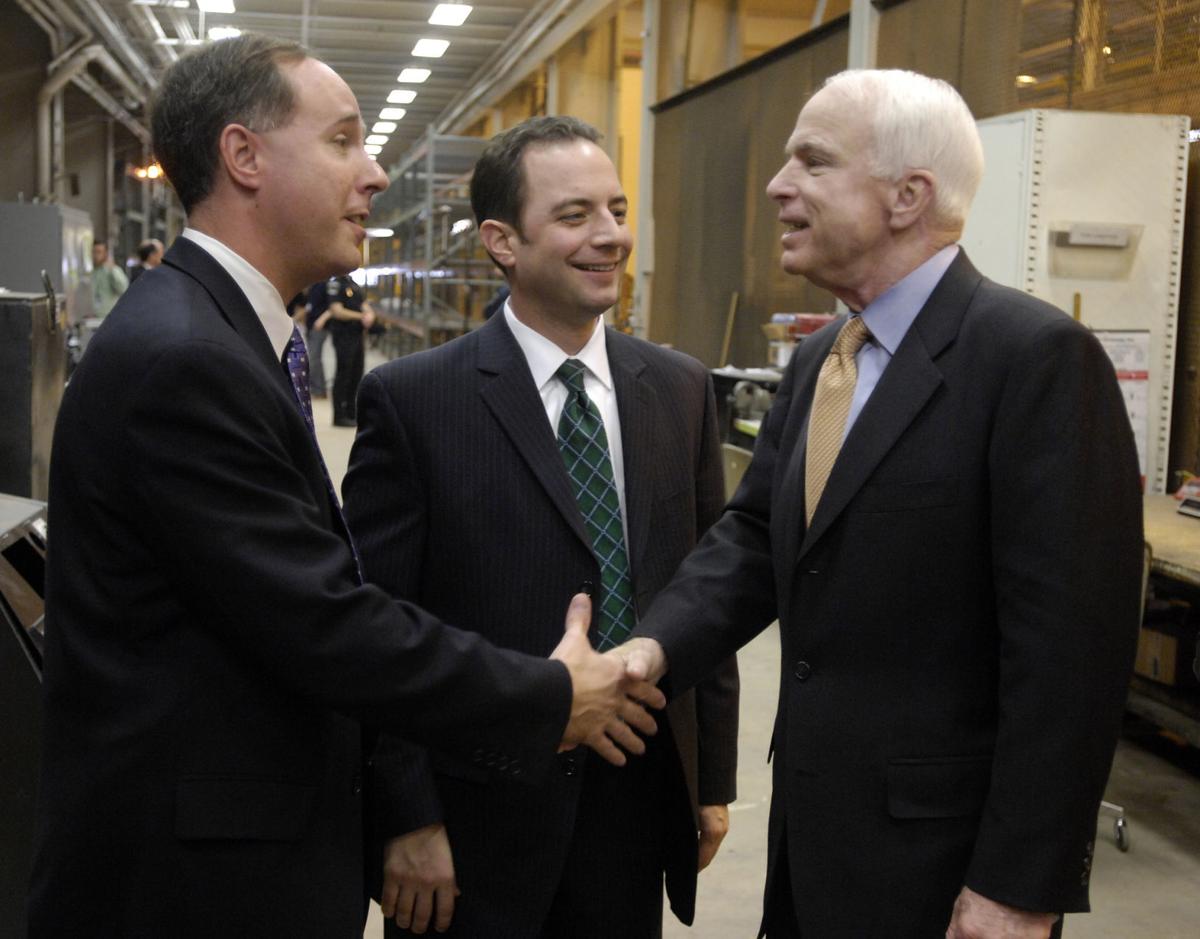 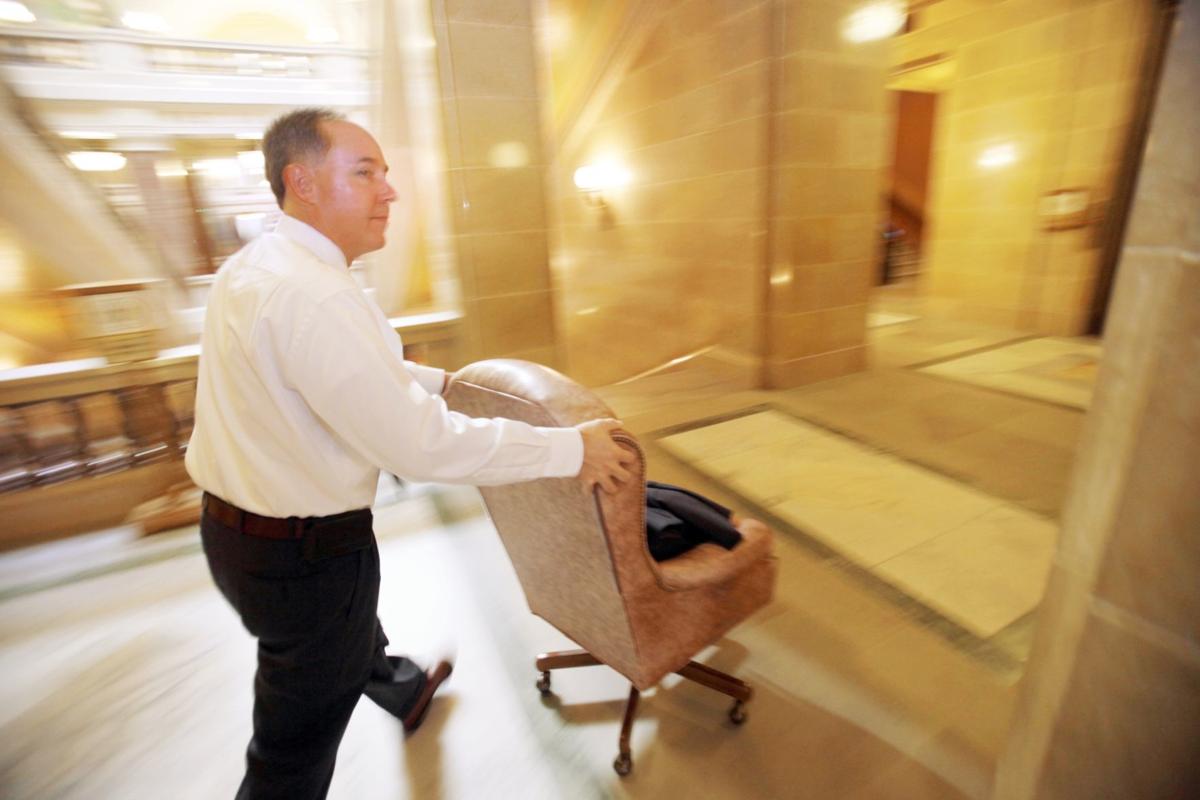 Rep. Robin Vos pushes a chair to his new office after Republicans reclaimed the majority in December 2010. Vos is looking to add more staff in the new year as legislative Republicans draft a budget to counter Gov.-elect Tony Evers'. 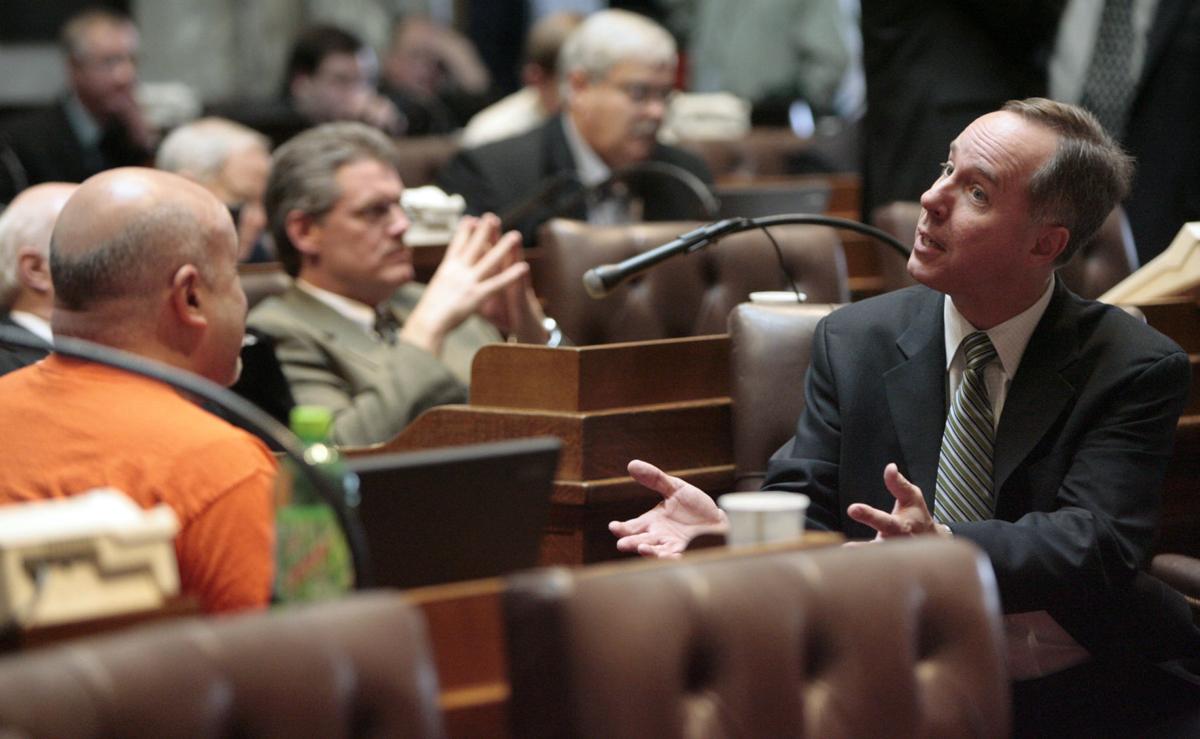 State Rep. Robin Vos talks across the aisle to Rep. Mark Pocan, D-Madison, in the state Assembly chamber during the contentious legislative debate over public-sector collective bargaining in February 2011. Pocan, now a member of Congress, called Vos "one of the three smartest leaders that I saw in action" at the state Capitol. 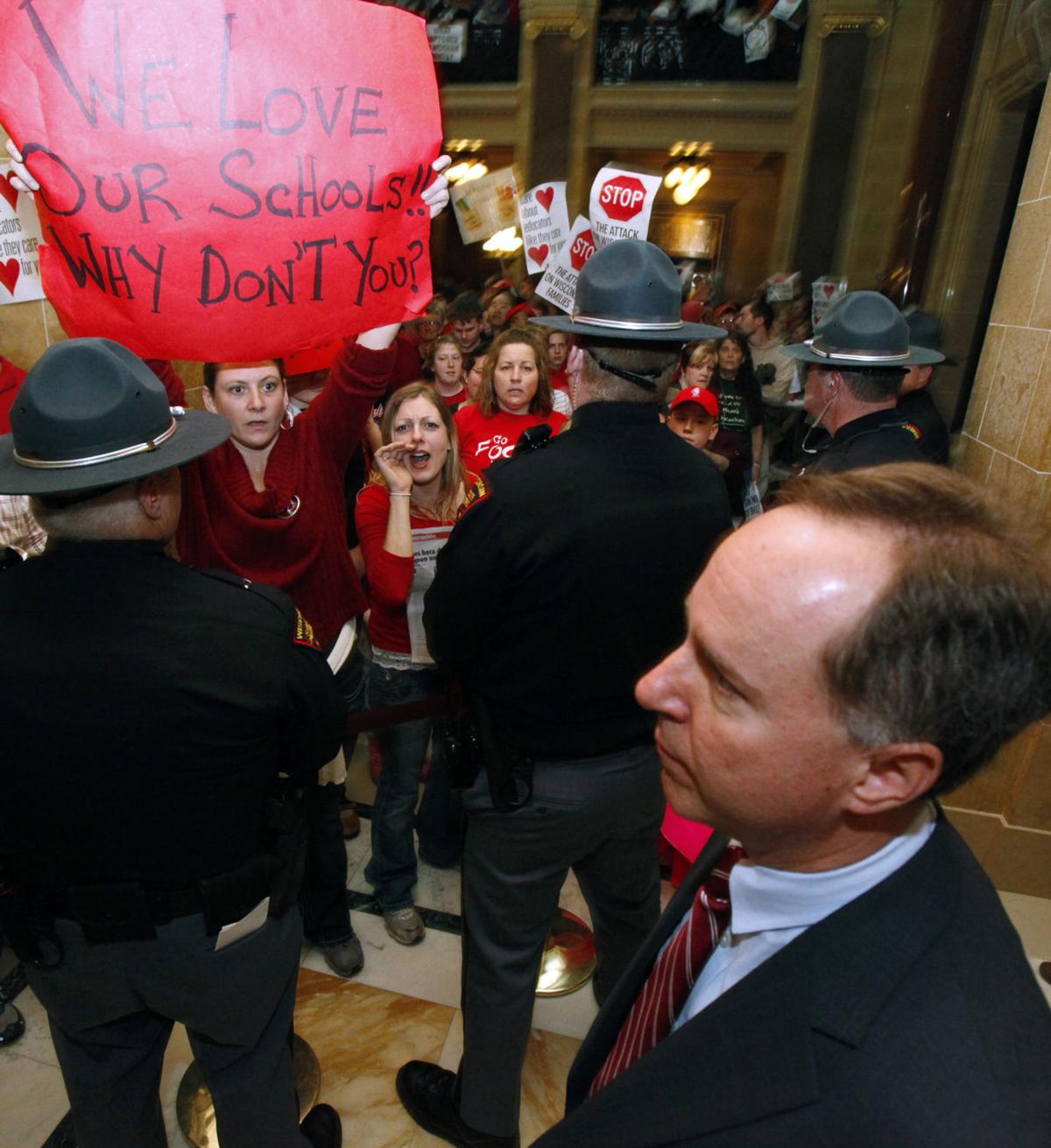 Protesters shout at Rep. Robin Vos as he leaves the Assembly chamber at the Wisconsin Capitol during the February 2011 debate over the collective bargaining law changes known as Act 10. 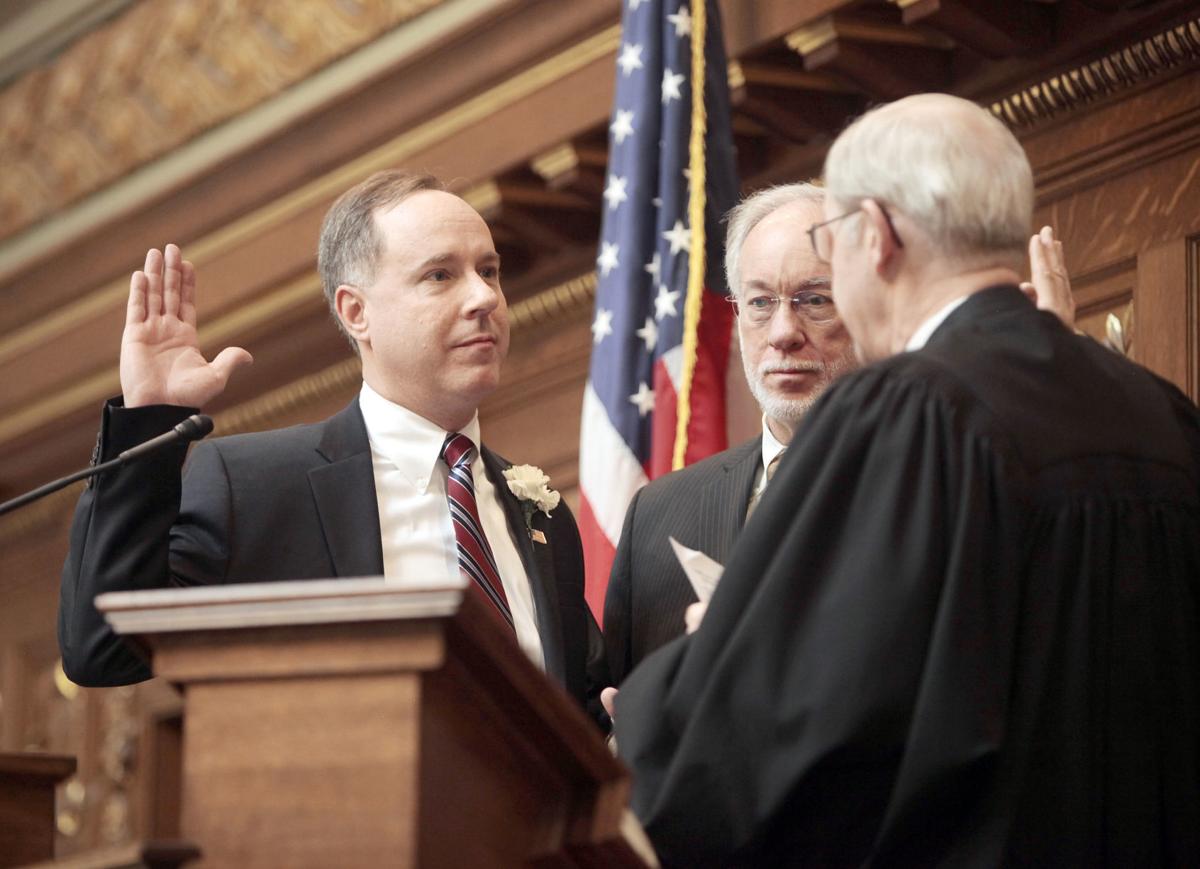 Assembly Speaker Robin Vos, left, is sworn in by Justice David Prosser in January 2013. Jan. 7, 2013. Vos served as chairman of the powerful Joint Finance Committee before becoming speaker in 2013. 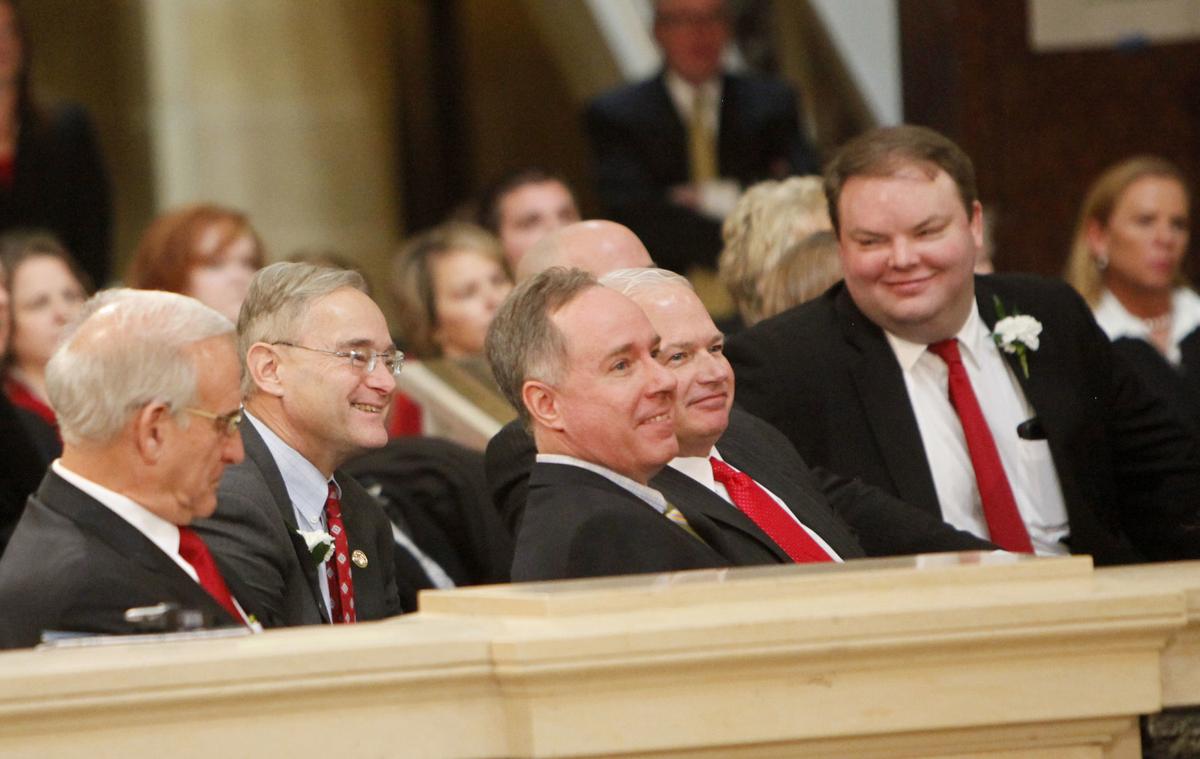 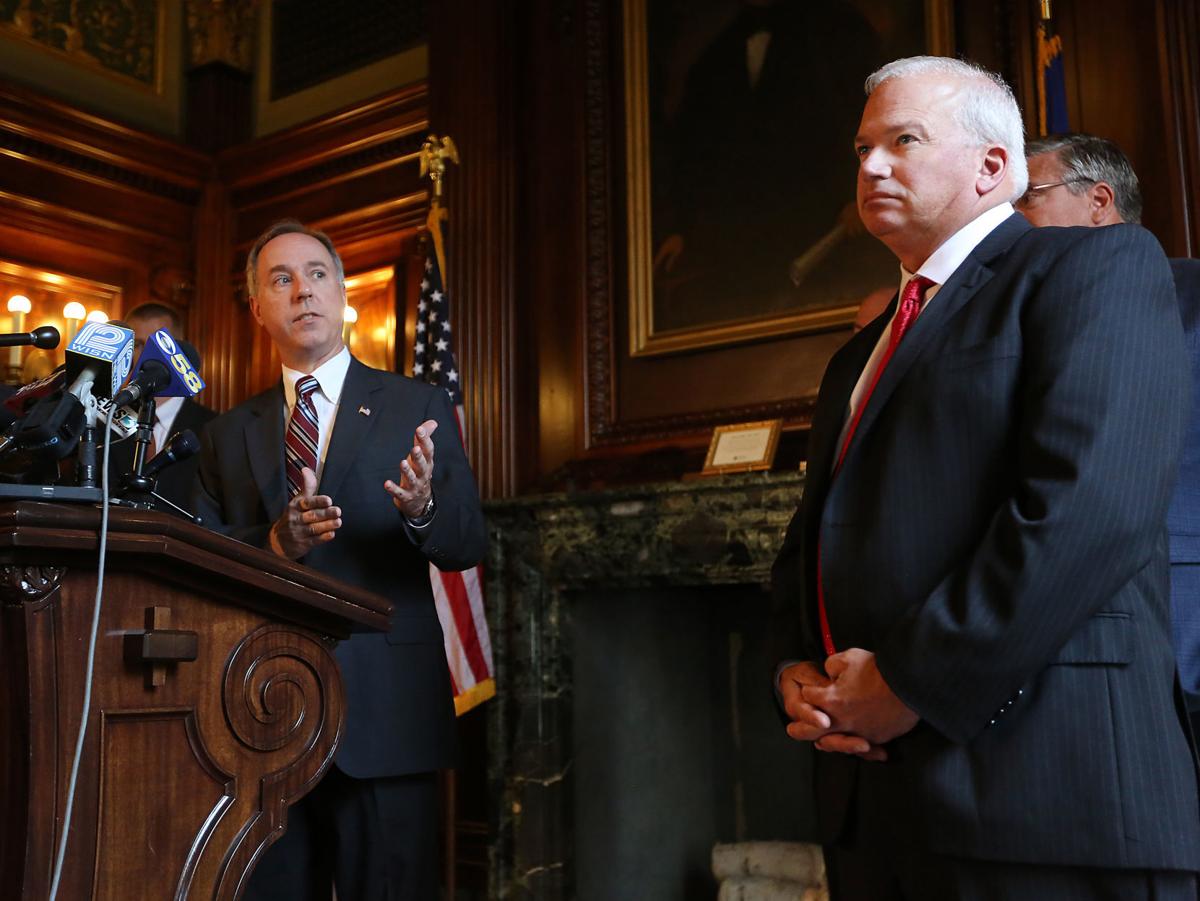