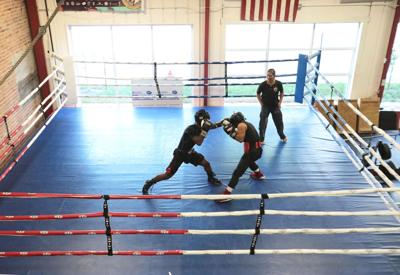 Andrea Nelson has a soft spot in her heart for the Wisconsin Golden Gloves state tournament because it was where she got her start in boxing.

Nelson didn’t win a title while making her amateur debut back in 1998 — she lost in the 147-pound final — but she got a feel for how special the event was and the impact it made on the boxing community.

Twenty years later, she found herself fighting for the future of an organization that had fallen on hard times. This time, with help from teammates, she was a clear winner.

The fruits of that labor will be on display during a three-day event that gets underway Friday at the Marriott West in Middleton. While Wisconsin is the host, there also will be boxers from Illinois, Iowa, Indiana and Minnesota among the 132 registered participants.

It’s the second time in three years that the Madison area will host the tournament since the Bob Lynch Boxing Foundation, led by Nelson, took over the Golden Gloves franchise. Last year’s event was canceled due to the COVID-19 pandemic, with Nelson on her way to the Marriott West to set up the ring when she got the call that the tournament couldn’t go on as planned.

Organizers are hoping that doesn’t stall what was a successful re-opening of sorts in 2019, when Nelson said around 500 fans were in attendance each day of what was then a two-day event.

“We thought it would be a three- to five-year road to get it back (on solid footing) because you don’t just build it and they will come,” said Mike Noack, who’s on the Bob Lynch Boxing Foundation board of directors. “But Year 1 exceeded expectations.”

At the very least, it served as an important first step in getting a flailing organization back on solid ground.

For about two decades, the face of Wisconsin Golden Gloves was Howard Zaffke. A Milwaukee native, Zaffke was inducted into the National Golden Gloves Boxing Hall of Fame in 2005.

When Zaffke died in 2011, his family tried to keep Wisconsin Golden Gloves going in his honor. But it was a struggle.

A 2016 Milwaukee Journal Sentinel story included details on the financial challenges the organization was dealing with while being run by Kathy Meyer, Zaffke’s daughter. One hurdle was finding enough money to send the five Wisconsin qualifiers to the national tournament in Salt Lake City that year; Meyer had started a GoFundMe page to defray costs and, over 12 days, it had raised a total of $170 from three people.

The state tournament wasn’t even held in 2017 and, according to updates that appear to be posted by Meyer on a Wisconsin Golden Gloves Charities Facebook page, multiple events the next year had to be canceled.

Nelson, and those around her, had seen enough. By then, she was running the nonprofit foundation named after Lynch, the longtime face of boxing in the Madison community who had trained both Nelson and 1996 Olympian Eric Morel, and training boxers at Ford’s Gym on Winnebago Street.

“It had lost its luster and attraction,” Noack said. “She was like, ‘We’re going to get this back going in Wisconsin and build it.’”

Nelson and others put together a business plan that included financial support from local sponsors and put in an application to take over the Wisconsin Golden Gloves franchise. By the fall of 2018, Nelson and current Bob Lynch Boxing Foundation vice president Eddie Kenrick were on a plane to New Jersey to attend a Golden Gloves of America board meeting in Atlantic City.

Both Nelson and Kenrick spoke during a presentation that lasted about 10 minutes. Nelson, who has dealt with plenty of stress in her life — more on that later in this series — remembers the tension in that room that day as they made their case in front of people who had served on that same board with Zaffke.

“She poured her heart out, saying, ‘Look, I don’t want to take anything from anybody but these kids are suffering,’” Kenrick said.

Meyer, who didn’t return a phone call seeking comment for this story, sent a representative to the meeting to state the family’s case for keeping the franchise. But the Golden Gloves of America group decided to hand it over to the group led by Nelson.

“The bottom line is you just need someone that’s really all in to run these things because it takes a lot of dedication to do this,” said Bob Russo, who is the Golden Gloves of America national president along with running a gym in Maine and serving as the executive director for New England Golden Gloves. “And again, no one’s getting paid, this is all a volunteer thing.

“It takes someone who has that kind of spirit and has the time to do it and the know-how and the background and the ability to raise funds and the ability to promote events and to make them successful and to get sponsors. She basically was the right person for the job.”

National qualifiers from the 2019 Golden Gloves Wisconsin state tournament were awarded with an all-expenses paid trip to the national tournament. For some of them, it was their first time leaving the state of Wisconsin.

This year’s national event will be held next month in Tulsa, Oklahoma, where Nelson has rented an Airbnb for the Wisconsin crew to stay and train together.

Nelson went out of her way over the course of several interviews to not say anything disparaging about the Zaffke family or its handling of the Wisconsin Golden Gloves franchise. This wasn’t a power play on her part.

“She just wants to give kids the best experience of their life,” Kenrick said.

Wednesday: How and why Andrea Nelson and the Bob Lynch Boxing Foundation took over Wisconsin Golden Gloves franchise.

Thursday: Andrea Nelson has made a profound impact on the boxers she coaches.

Friday: Andrea Nelson has overcome struggles on the way to becoming successful in and out of the ring.

When: Friday (doors open at 5 p.m.), Saturday and Sunday

Jim Polzin became Lee Sports Wisconsin columnist in June 2021 after covering the UW men's basketball team for the Wisconsin State Journal for 10 seasons. The Clintonville native covered UW football for 13 years for The Capital Times and is the author of “Badgers by the Numbers,” a book published in 2009 that profiles the best UW football player at each jersey number.

According to the boxers who have trained with her, Nelson is part boxing coach, part life coach — bringing a blend of toughness and support that's perfect for people looking to face their fears.

Jim Polzin: Andrea Nelson's extended boxing family has helped her just as much as she’s helped them

The sport helped Nelson turn around her life to the point where she’s now making an impact on the boxers she coaches — just as they continue to stand in her corner. 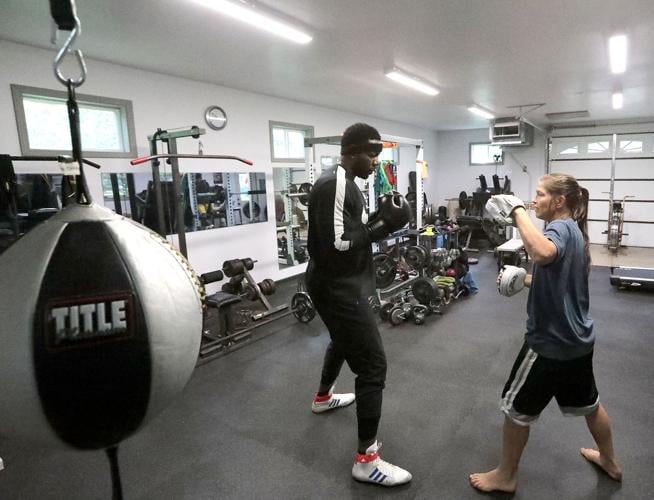 Andrea Nelson instructs Louis Nzegwu during a training session in a gym on her property in Madison earlier this month. 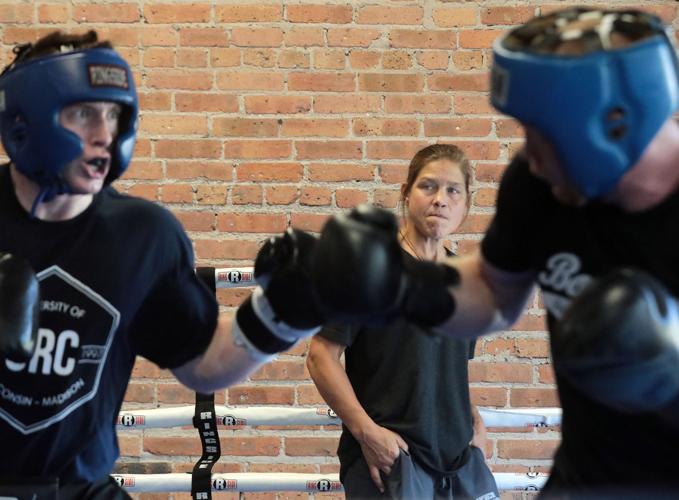 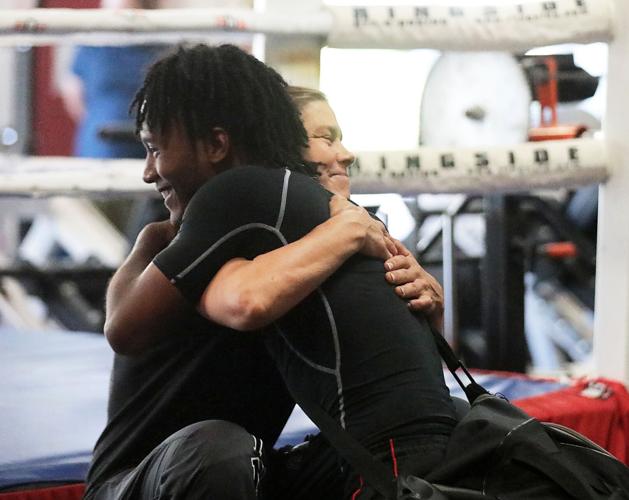 Andrea Nelson greets Deshawn Ford, 19, with an embrace as he arrives for a training session June 30 at Ford’s Gym in Madison. 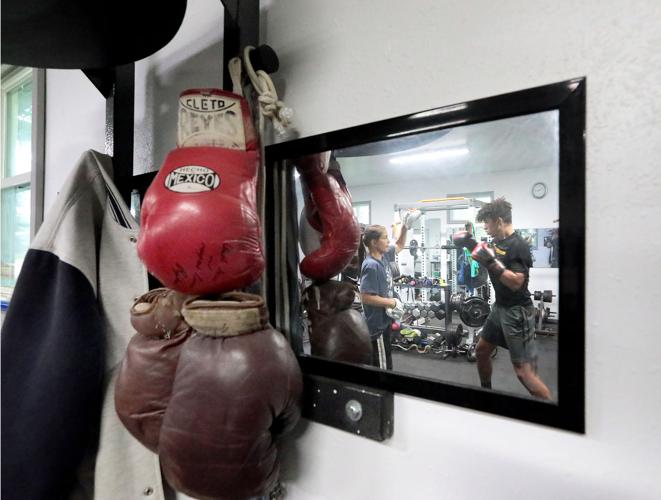 Andrea Nelson guides Josh Porter, 18, through a training session in a gym on her property in Madison earlier this month.