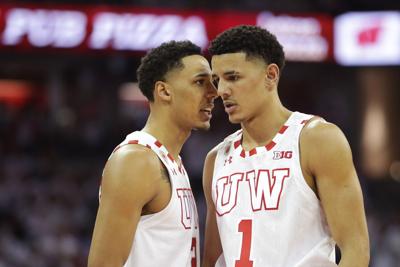 Star athletes at UW-Madison are finally getting a piece of the enormous revenue surrounding Badgers sports, especially men’s basketball and football.

Other players with lower profiles deserve greater financial incentives, too. We love the idea, floated by the chancellor earlier this month, of offering student athletes cash awards for good grades. That will help continue Wisconsin’s strong reputation for graduating most of its players in all of its sports.

Anyone who drives the Beltline in Madison has seen a giant sign of college sports’ improving financial fairness. All-American and Big Ten Player of the Year Johnny Davis hawks soda on a billboard in his Wisconsin basketball uniform. “Game on, Badgers,” the advertisement reads. Davis appears on a second billboard with his teammate and brother, Jordan. The two have another endorsement deal with Kenosha-based apparel company Jockey International.

The NCAA started allowing players to monetize their name, image and likeness (NIL) last summer, and so far it seems to be working in Wisconsin. According to State Journal sports reporter Colten Bartholomew’s article last week “Different approach to the NIL,” several top Badgers have generated six-figure revenue, while others have earned tens of thousands of dollars through NIL deals.

It’s about time, given the huge impact these star players have in filling seats at games and drawing national television audiences. The Big Ten’s television contract is expected to top $1 billion annually by 2023.

Unfortunately, Congress has failed to set uniform rules on NIL, leaving a patchwork of state laws and practices. As Bartholomew reported, even the most basic rules on NIL are being violated by other programs, with no enforcement so far. That needs to change to protect the integrity of college sports, which help promote enthusiasm for higher education.

Bucky should never back off the books

Wisconsin athletic director Chris McIntosh is wise to resist the temptation to dangle NIL payouts in front of coveted recruits. That’s ripe for abuse. NIL should be a limited way to provide more fairness to high-impact athletes, not a corrupting influence that turns college sports into professional leagues with million-dollar bidding wars.

Wisconsin also should do more for the vast majority of players on all of its varsity teams who will never turn pro. It takes a full team, after all, to compete and gain national attention. And successful sports team help recruit non-athletes to apply for admission, bolstering academic programs. Unlike most students, college athletes often risk injury by competing and don’t have time for off-campus jobs because they’re so busy training.

Pay for grades is the answer. As outlined by UW-Madison Chancellor Rebecca Blank, college athletes soon could collect nearly $6,000 per year for academic success such as good grades. UW appears to have plenty of money to cover such an expense, given the inflated salaries it showers on its coaches.

Many college athletes already get free room and board, tuition, health insurance and tutors. That’s substantial. But providing greater incentive for academic success would help ensure the “student” part of student athletes remains the priority. To its credit, Wisconsin already requires tougher admissions policies than a lot of its sports rivals.

We also like Blank’s idea of disqualifying athletic programs across the country that aren’t graduating their student athletes at a solid rate. If they’re not really students, they don’t belong at universities.

Academics are more important than sports. Wisconsin needs to keep it that way, while being fair to all of its athletes who dedicate so much time and energy into making Wisconsin successful on and off the field.

Tampa Bay Times: One practical way for Florida to prepare for sea-level rise

It's not a panacea, but it will help

John Foust: Ask state lawmakers for the records they delete

If a legislator deletes an email, is it truly gone? Not necessarily.

Keep the buzz going for 'No Mow May'