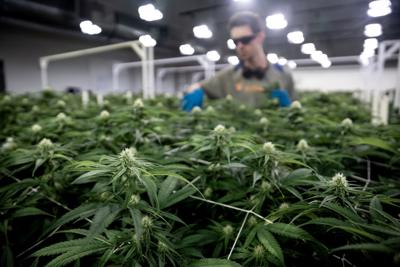 Thirty-seven states — including Mississippi, whose Republican governor signed a medical marijuana bill into law last week — allow patients struggling with cancer, multiple sclerosis and other terrible diseases to use cannabis.

If anything, Wisconsin is being deviant by refusing to allow medical marijuana. Wisconsin is quickly becoming one of the last states to stand between doctors and their patients who might benefit from the drug. Marijuana can be a more natural way to ease patients’ nausea and help them relax in the face of life-threatening afflictions.

LeMahieu and the Republicans who control the Senate don’t need to take our word for it. They can just ask Sen. Mary Felzkowski, R-Irma, who recently unveiled a bill to legalize medical marijuana in Wisconsin. Felzkowski wishes she could have legally used cannabis to fight breast cancer instead of having to take a “daily cocktail of lab-produced, heavy grade pharmaceuticals,” which can be “extremely debilitating.”

That’s why Felzkowski is sponsoring bipartisan legislation to allow medical marijuana in Wisconsin as a “compassionate option for those who need relief.”

LeMahieu, R-Oostburg, says he wants to wait for the federal government to approve medical marijuana. But given unreasonable Food and Drug Administration limits on marijuana research, that’s unlikely to happen soon. Moreover, federal law has prohibited the U.S. Department of Justice from spending money to interfere with states that implement medical cannabis. So in effect, the federal government is allowing medical marijuana by default.

To his credit, LeMahieu will at least allow a public hearing on Felzkowski’s bill, Felzkowski said. That should help bring out the facts and urgency for granting sick people this plant-based option for doctor-prescribed treatment.

Several Republican lawmakers stood behind Felzkowski in support of her bill at a recent press conference. Most if not all Democratic lawmakers back medical pot. So does Assembly Speaker Robin Vos, R-Rochester.

That means medical marijuana is likely to pass — if only LeMahieu would allow a Senate vote. A Marquette Law School poll of registered voters in 2019 found 83% of respondents across the state were supportive.

Democrats are right that the bill doesn’t go far enough. Wisconsin should legalize small amounts of marijuana for recreational use, too, as 18 other states have. Billboards in Wisconsin already beckon residents to drive to Illinois and Upper Michigan for legal marijuana. Wisconsin estimates it is losing $167 million in tax revenue a year by forcing its residents to drive across the border to buy legal pot there.

But Democratic Party idealists shouldn’t stand in the way of incremental progress. With Felzkowski as a powerful advocate for patient rights, the GOP is moving closer to approving medical marijuana, something Democratic Gov. Tony Evers would sign into law.

The Legislature should get this done in bipartisan fashion so desperate patients have access to this helpful drug. Wisconsin allows opioids to be prescribed by doctors. Opioids have led to terrible addiction. By comparison, cannabis is mild and far less risky, especially when regulated for quality in limited amounts.

Felzkowski’s bill would create a medical commission to oversee the dispensing of medical marijuana through qualified primary care providers. The drug could be dispensed in liquid, oil, pill, texture or topical forms, though not inhalants.

Wisconsin should finally get this done before it’s the last state in the nation unwilling to grant sick people this small dose of mercy.

Orlando Sentinel: A recipe for disaster for voting by mail in Florida

How many envelopes does it take to return a mail ballot in Florida?

Samba Baldeh: Sending $150 checks to everyone in Wisconsin is fair and fiscally responsible

The state once again has overtaxed the families and employers of Wisconsin — this time to the tune of $3.8 billion.

The Trump administration was great for business — if your business happened to be running private detention centers for migrants. Though depor…

Steve Chapman: Why Americans have bad feelings about a good economy

The U.S. economy is doing its best impression of a Formula One car, racing at high speed while negotiating a series of twists and turns. Last …

Lynn Schmidt: Rhinos have a lot in common with RINOs

The rhinoceros is second only to elephants as the largest land mammal in the world. Rhinos are solitary animals, but there are exceptions. The…

Leonard Pitts Jr.: An open letter to LGBTQ kids about Ron DeSantis and his ilk

An open letter to LGBTQ kids:

MARIUPOL, Ukraine — The airport in Ukraine’s second-largest port is shut. A Moscow-led “rebellion” around the city in 2014 made it too dangero…

As a glaucoma patient who has been inhaling cannabis for 50 years as a medical necessity to save my eyesight, I definitely agree with last Thu…