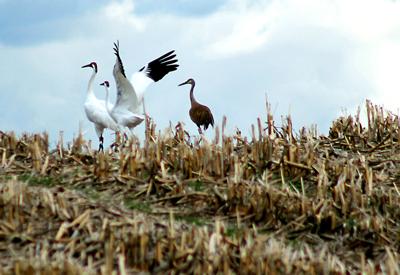 Sandhill cranes, beautiful birds that mate for life, return to Wisconsin this month after wintering in Florida. Their summer home might not be safe for much longer.

Hunters want state lawmakers to add sandhill cranes to Wisconsin’s list of game animals. The last time it was open season on sandhill cranes a century ago, humans drove the birds nearly to extinction in the eastern half of the United States. Let’s not make the same mistake again.

Too much hunting and destruction of habitat in the 18th and 19th centuries almost wiped out sandhill cranes. By 1936, only about a dozen breeding pairs were left in Wisconsin. The bird had died off in Iowa, Indiana, Ohio and some other states.

Decades of conservation work followed, and sandhill cranes rebounded. Today, more than 90,000 live east of the Mississippi River in the United States, and nearly half of them are in Wisconsin.

Hunters want a chance to shoot some of these birds for sport and for food. Rock musician and gun rights advocate Ted Nugent called sandhill cranes the “ribeyes in the sky” at the statehouse in Madison last year.

Lawmakers this year considered two companion bills – Senate Bill 620 and Assembly Bill 667 – to create a sandhill crane hunting season managed by the state Department of Natural Resources. Neither passed before the Legislature finished its regular business for the year, which is good. But expect the issue to return.

But farmers already have tools to respond. They may kill problem cranes in their fields if they have a permit from the U.S. Department of Agriculture. They also can apply nontoxic chemicals to their crops that the cranes find unpalatable.

If Wisconsin did authorize a hunting season, the DNR would set harvest and permit limits to try to secure the overall population of the sandhill crane. Unfortunately, those limits don’t always hold. Hunters sometimes kill more animals than the DNR wants them to.

In 2021, for example, the DNR set a target of 119 wolves during a one-week hunting season. Hunters reported killing 215 in less than three days, and the state had to cut the season short. Overkill of cranes would push the species in the wrong direction.

Nor would the sandhill crane be the only species at risk. Its cousin, the whooping crane, shares its habitat and can be confused for a sandhill in the moment at gun distance. The whooping crane is protected by the federal Endangered Species Act, and only an estimated 80 of these birds survive in the state. Killing even a single whooping crane pushes the species closer to extinction. That’s what happened in December during Oklahoma’s sandhill crane season when hunters shot four whooping cranes.

Hunting is an important tool in managing wildlife populations. It’s also part of Wisconsin’s heritage. Many families have traditions that go back generations of hunting food in a natural way. A successful deer hunt can fill a freezer for the winter.

Those hunters have many animals and seasons to choose from. They can shoot or trap game animals from squirrels to ducks to bears during appropriate seasons. They don’t need another critter, even ribeyes in the sky, to hunt if it means risking the health of two species — one on the brink of extinction, and one freshly back from it.

It's past time to get back to normal